As I was swiping through Instagram yesterday, I came across a project by de Leon + Primmer Architecture Workshop. It’s a visitor center for Wild Turkey Bourbon in Lawrenceburg, Ky., with all the hallmarks of this Louisville-based firm. There was a familiar but unfamiliar form, a riveting attention to detail, and an intriguing material palette. I emailed Roberto de Leon and asked him about it. The building, the Berkeley-and Harvard-educated co-founder of the firm told me, was finished in 2013. Still, it looks as crisp and relevant today as when it opened – and here we have a few words and images to describe it:

The Wild Turkey Bourbon Visitor Center in Anderson County, Ky. is all about dualities.

It’s part of a rebranding effort by Campari, which purchased the iconic bourbon-maker in 2009. The company, secure in the brand’s appeal to an older generation, wanted to bring in millennials too. And visitor tours on Kentucky’s Bourbon Trail were a prime driver for that effort.

There’s also the concept of contrasting the familiar with the unfamiliar. Jet-black like the creosote-stained tobacco barns dotting the Commonwealth’s rural landscape, the Monopoly-house form looks a lot like them from a distance. Up close, though, it’s anything but familiar.

“As you get closer it reveals itself as not simple but as a building with a lattice skin that’s very complex and tactile,” says Roberto de Leon, partner and founder in de Leon & Primmer Architecture Workshop. “It was a deliberate strategy – it’s a more intimate scale for the visitor.”

Then there’s the matter of dark skin versus bright interior. “Moving around inside, you see how the light filters through it,” he says. “At night you can see right through it, one end to the other.”

Architects at DPAW carefully considered the visiting sequence for the site, start to finish. Guests arrive via a meandering drive, accentuated by the designers as they elongated the trip from visitor center to the distillery atop a nearby hill. “Only after they drive in do the trees open up and they see the center as a big factor in the design,” he says.

Once they arrive, they purchase tickets, board a tour bus, visit the distillery and return to the visitor center. Up in the second-floor tasting room, there’s more than just the bourbon to appreciate. There’s also a sweeping vista from the Kentucky Palisades, an enormous, natural rock formation.

“The site is sloping and ends at the cliff overlook, so there’s the whole notion of extending to the edge of the cliff” he says. “You go up to tasting room and there, the view of the Kentucky River is revealed.”

The interior is mostly Douglas fir and locally sourced wood. But the exterior is stained-black cypress. “Cypress is what the old distilleries were made of, so it’s very evocative of that and of the barrels the bourbon is made in,” he says. “Bourbon has to be made in newly charred white oak barrels, and we drew on that.”

The exterior also metaphorically references a family of wild turkeys living up the hill. “That’s what the facade is comprised of – there’s the plumage of the birds in the it,” he says. “Where the lattice is over the windows are hinged metal frames that open up like a bird fluffing its feathers – and they open up to clean the windows.”

This is no ordinary visitor center, but an immersive experience that ends with visitors hanging out with master distillers Jimmy and Eddie Russell, who revel in the interaction.

And it’s clearly a Kentucky-inspired design. “We wanted to make sure that the closer you get to the building, that it felt of its place and that you couldn’t imagine it anyplace else,” he says.

Anyone who’s ever traveled the Bourbon Trail knows how well they’ve succeeded. 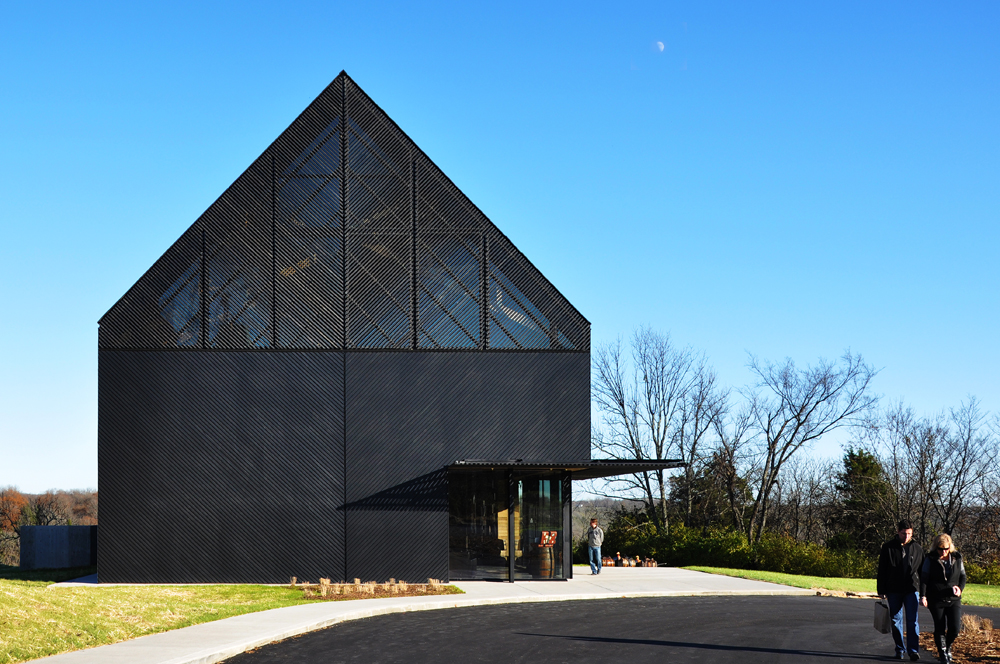 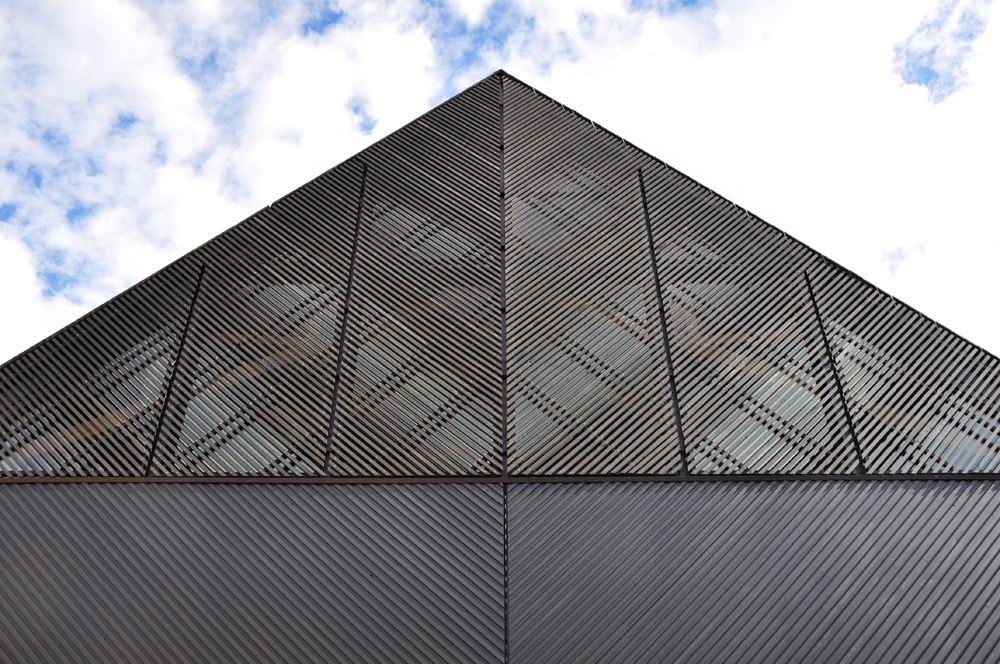 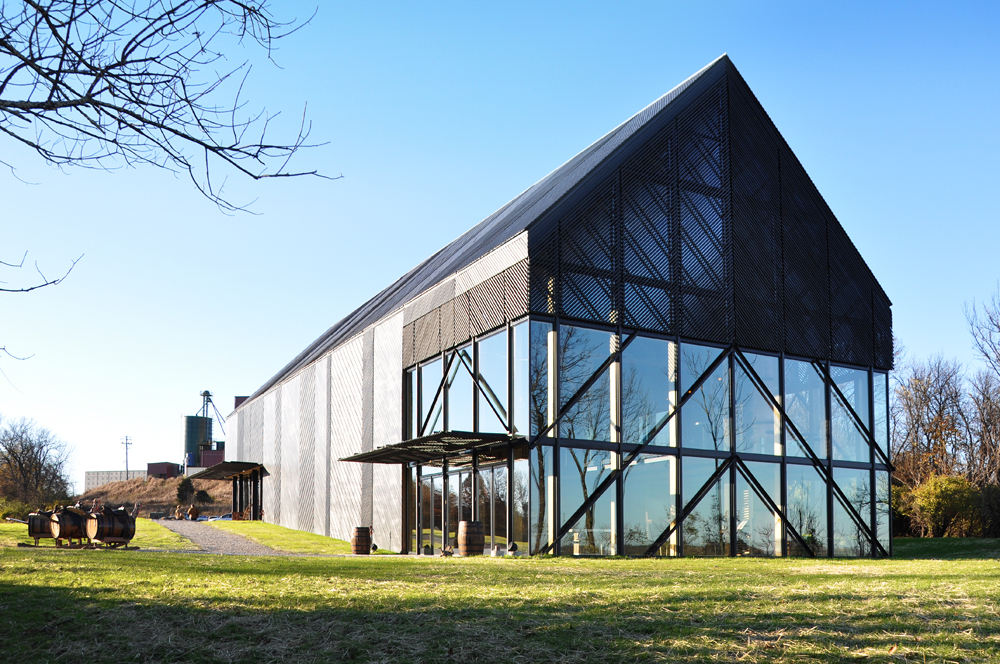 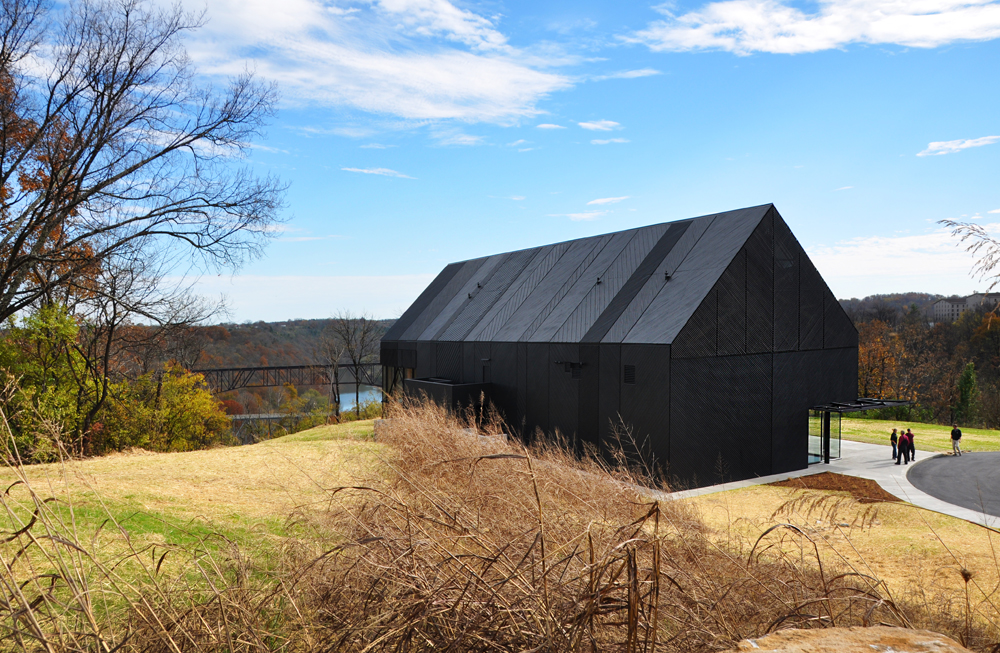 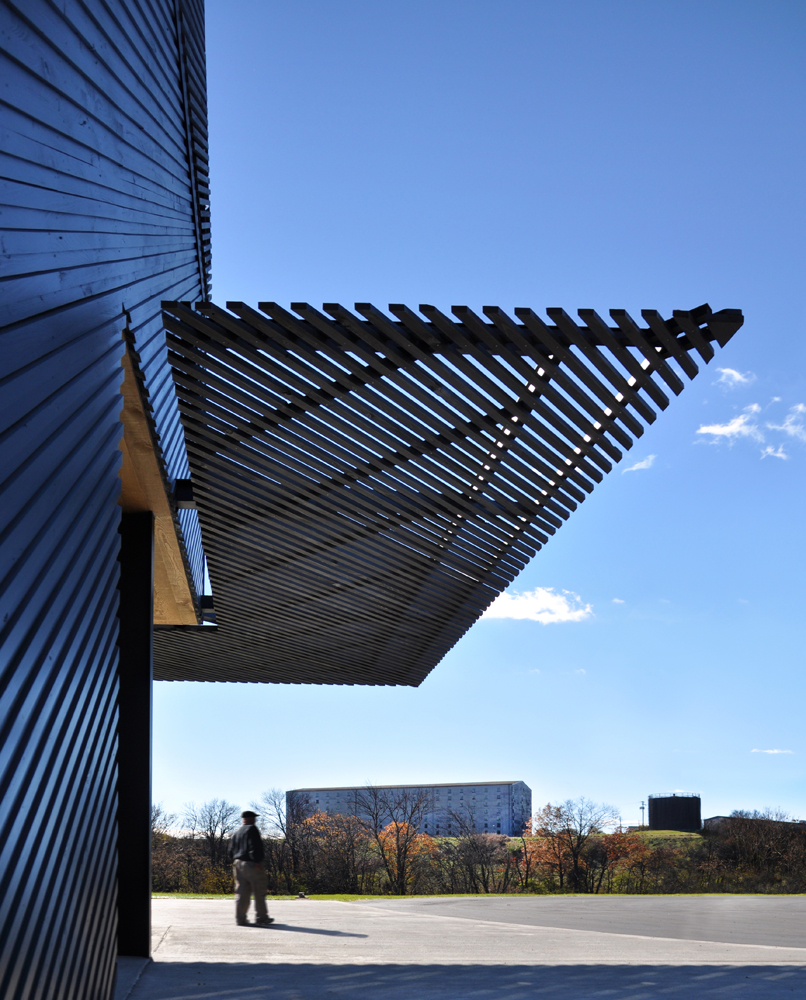 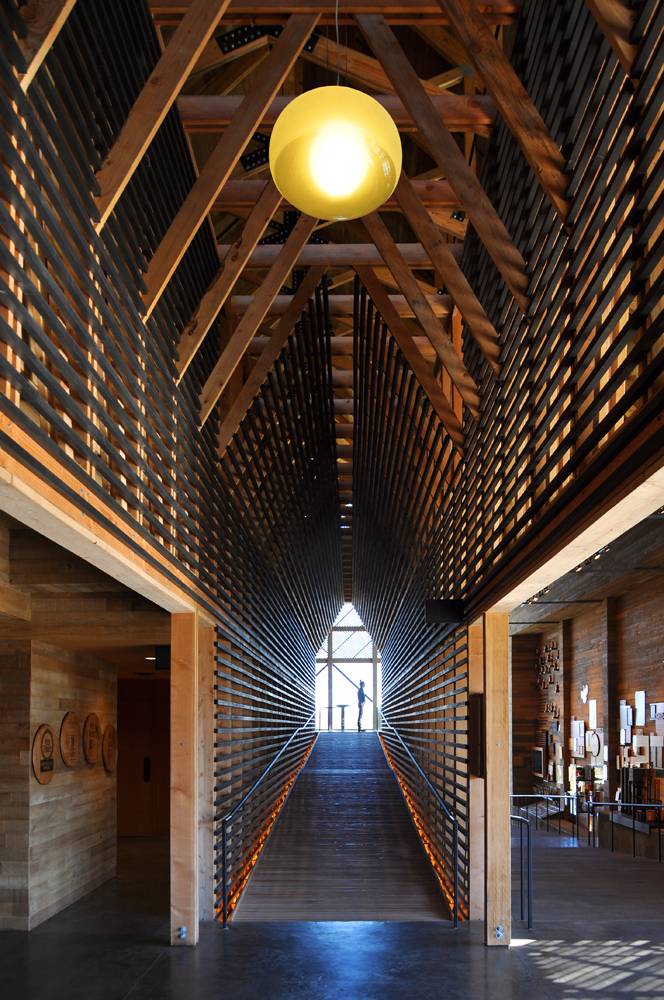 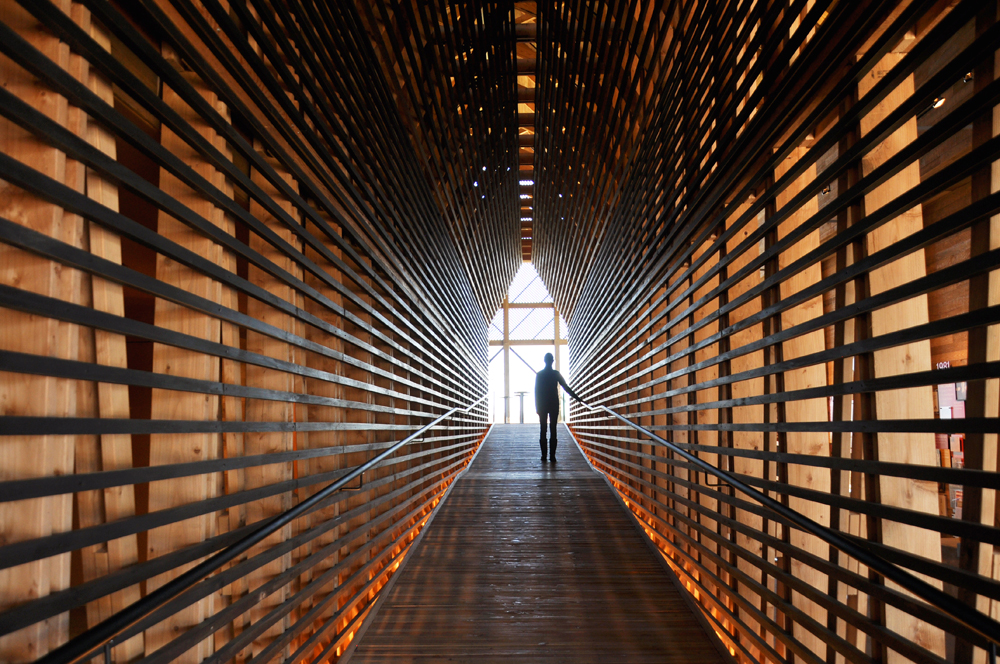 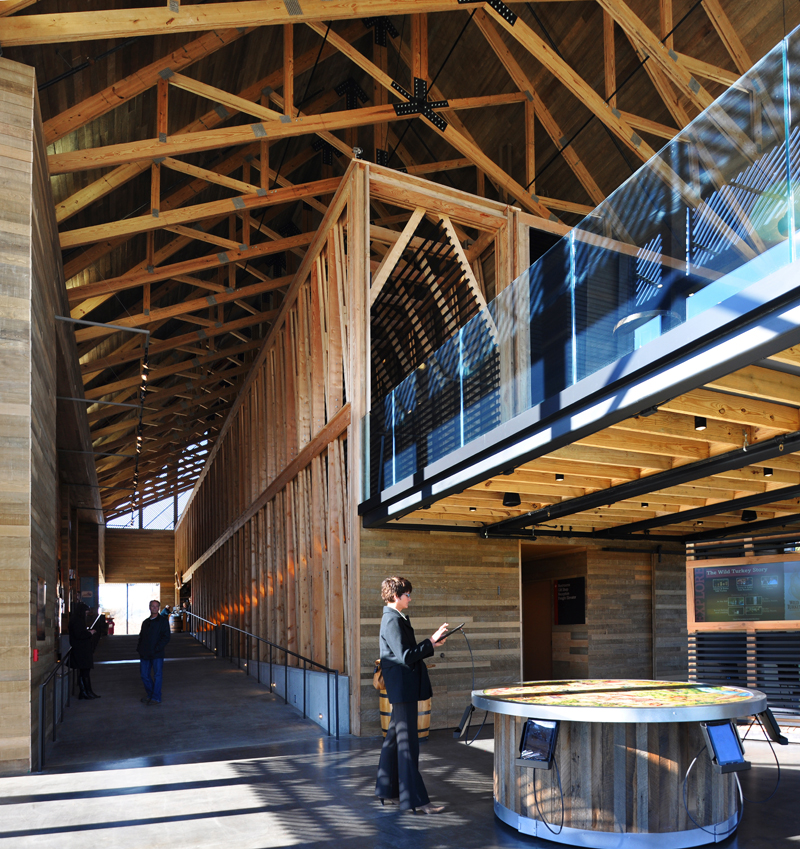 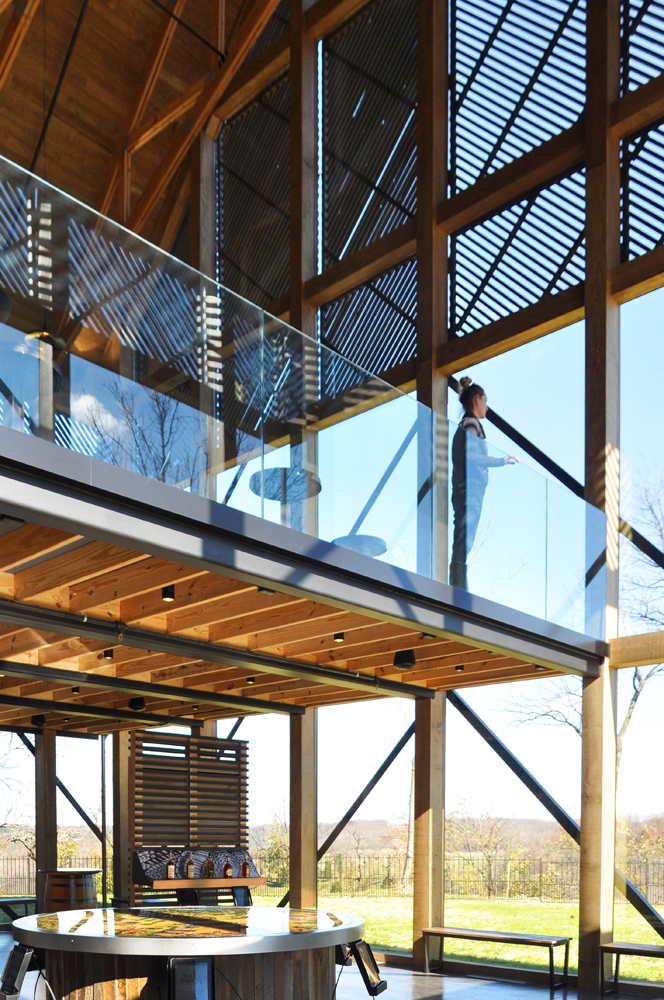 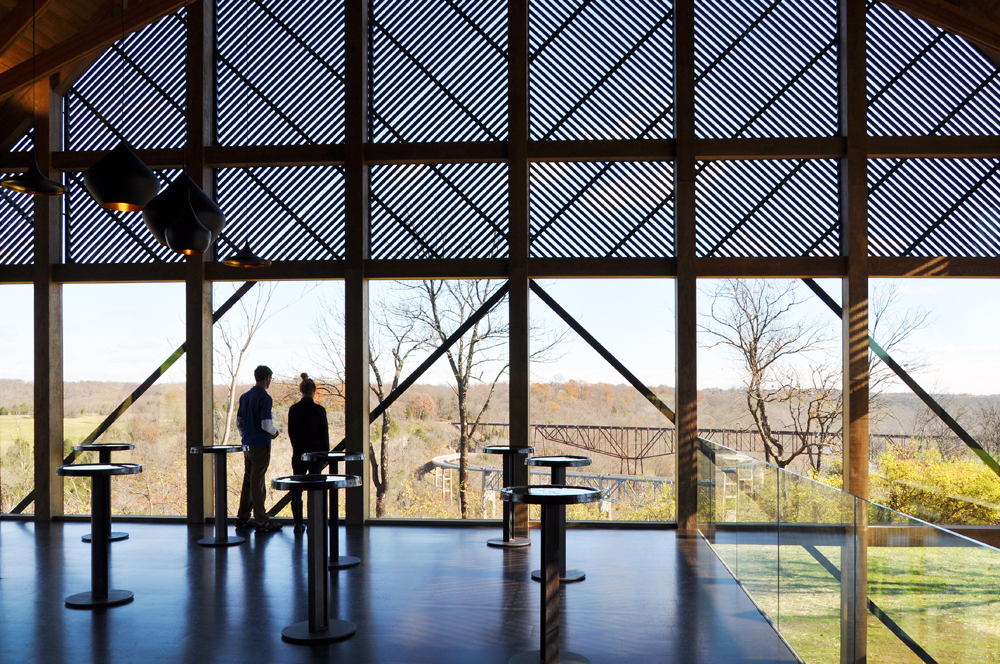 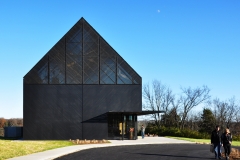 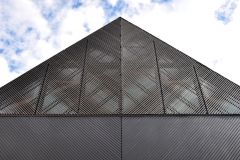 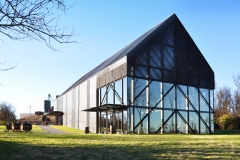 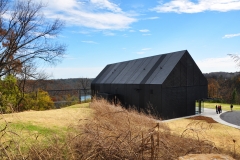 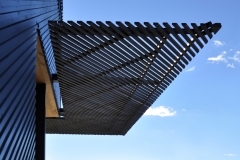 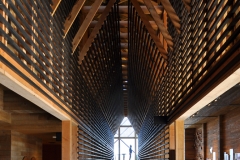 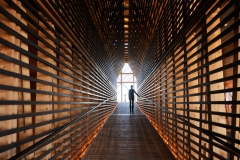 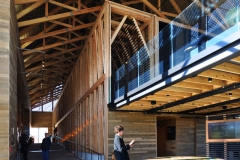 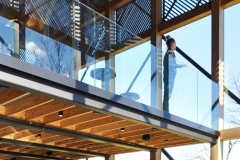 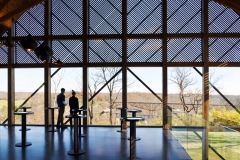 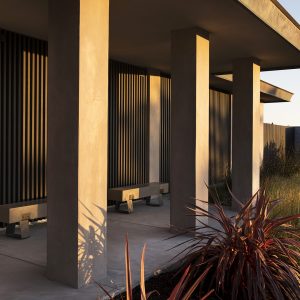 Chaste is the descriptor that best fits John Lum Architecture’s renovation of a chapel at Olivet Funeral & Cremation Services...