Sandhya Naidu Janardhan is an architect and managing director of Community Design Agency, an initiative of Curry Stone Design Collaborative, a Mumbai-based design studio established in 2017. Her team includes architects, engineers, artists, designers, community advocates and business professionals. CDA focuses on addressing global and social issues through a community-focused collaborative design process within underserved communities, and addresses inequalities in the built environment. Projects completed and underway to date are located in communities across India. A+A recently interviewed her via email about a public/private housing project in Sanjaynagar that began over three years ago. Phase One recently opened when 33 new homeowners – former slum residents – moved into their new homes. Eventually, CDA will create 298 homes, a new neighborhood and home ownership where over 50 percent of the ownership will be female. It’s one of the first public/private partnerships that aims to revolutionize land that was once all slum into a growing revitalized neighborhood through participatory design. The interview, then:

What was the design intent here?

The design intends to preserve the social fabric of the community, through thoughtful and purpose driven planning and architecture. Primarily driven by a participatory process with the residents of the neighborhood, engaging with them at different scales of design – starting with the masterplan, coming down to individual clusters and finally each family designing their apartment interiors facilitated by our community architects.

How did the site drive the design?
The existing site is a slum that has been occupied for about 40 years. The slum, while inadequate in basic services and safe homes, has a series of open areas of varying sizes where the residents spend most of their time. These shared spaces have evolved over the years based on relationships and interactions between the residents – women use this area to prepare food for cooking, wash utensils, while elderly sit outside as they watch children play, and goats and dogs share these spaces as well. The spaces make for a robust social infrastructure that the design for the new redevelopment attempts to emulate and replicate through a participatory design process with the residents.

What was the material palette?

The building constructed in Phase 1 is a multi-storied, load-bearing structure with reinforced masonry walls. The bricks are made of fly ash (a by-product generated from manufacturing industries around the city), while crushed sand and cement were locally manufactured. The roof draws inspiration from vernacular construction and is built with a plank and joist system made of steel I-sections and stone slabs.

For the facade facing the courtyard, screens made of split bamboo and steel frame provide an interesting play of light and shadow along the corridors throughout the day. The use of color for window frames and the balcony railing adds contrast to the monochromatic facade.

The scale and proportion of the project?

The overall project consists of 298 homes, each 306 square feet, and each built on approximately two acres of land. These homes are organized into G+2 structures around courtyards of varying sizes, allowing for social infrastructure to be incorporated in the early stages of the design process. The Phase I building is organized around a small courtyard, and consists of 33 homes that have been provided with corridors of varying widths to allow for incidental social interactions.

Rajesh Vora (b.1954) is a widely published Mumbai-based photographer who has focused primarily on architectural and cultural subject matter. He graduated in 1979 from the National Institute of Design in Ahmedabad, India. His architectural photography appears in Domus (India), Architectural Design (India), Inside Outside, Dezeen, and ArchDaily. In 2001, 2007, 2010, and 2016, Vora was commissioned to document architecture projects with social relevance in India and Bangladesh for The Aga Khan Award for Architecture Foundation. His photographs have been exhibited in Santa Cruz de Tenerife (Canary Islands), Lille (France), Newark Museum (New Jersey), PHOTOINK (New Delhi), Jaipur Photo Fest, and India International Centre (New Delhi). 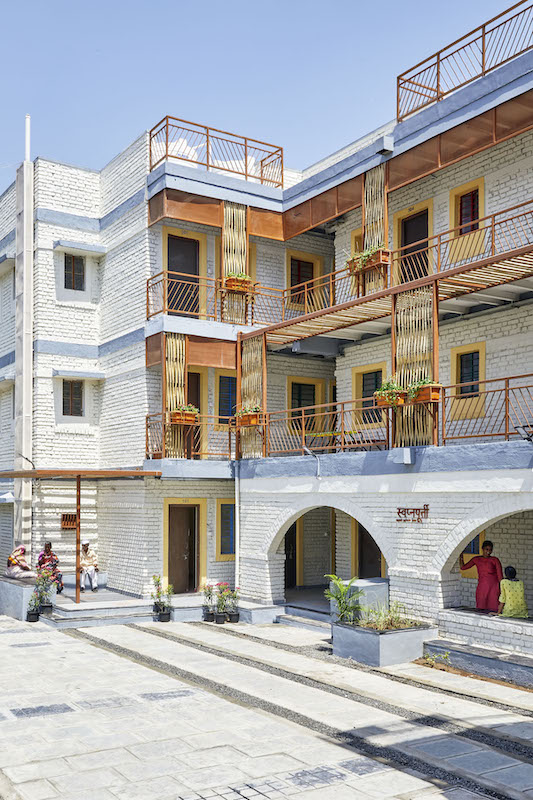 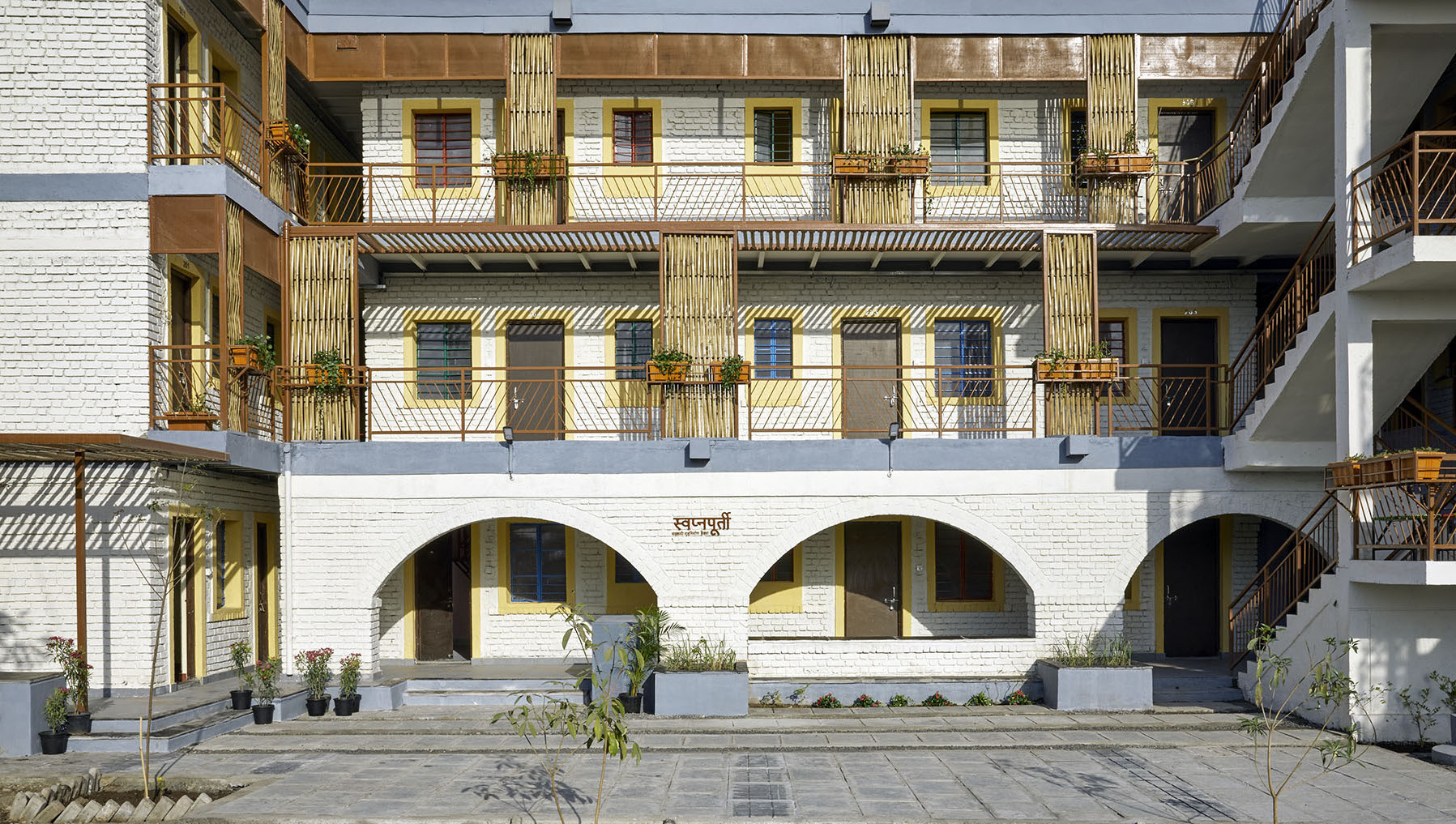 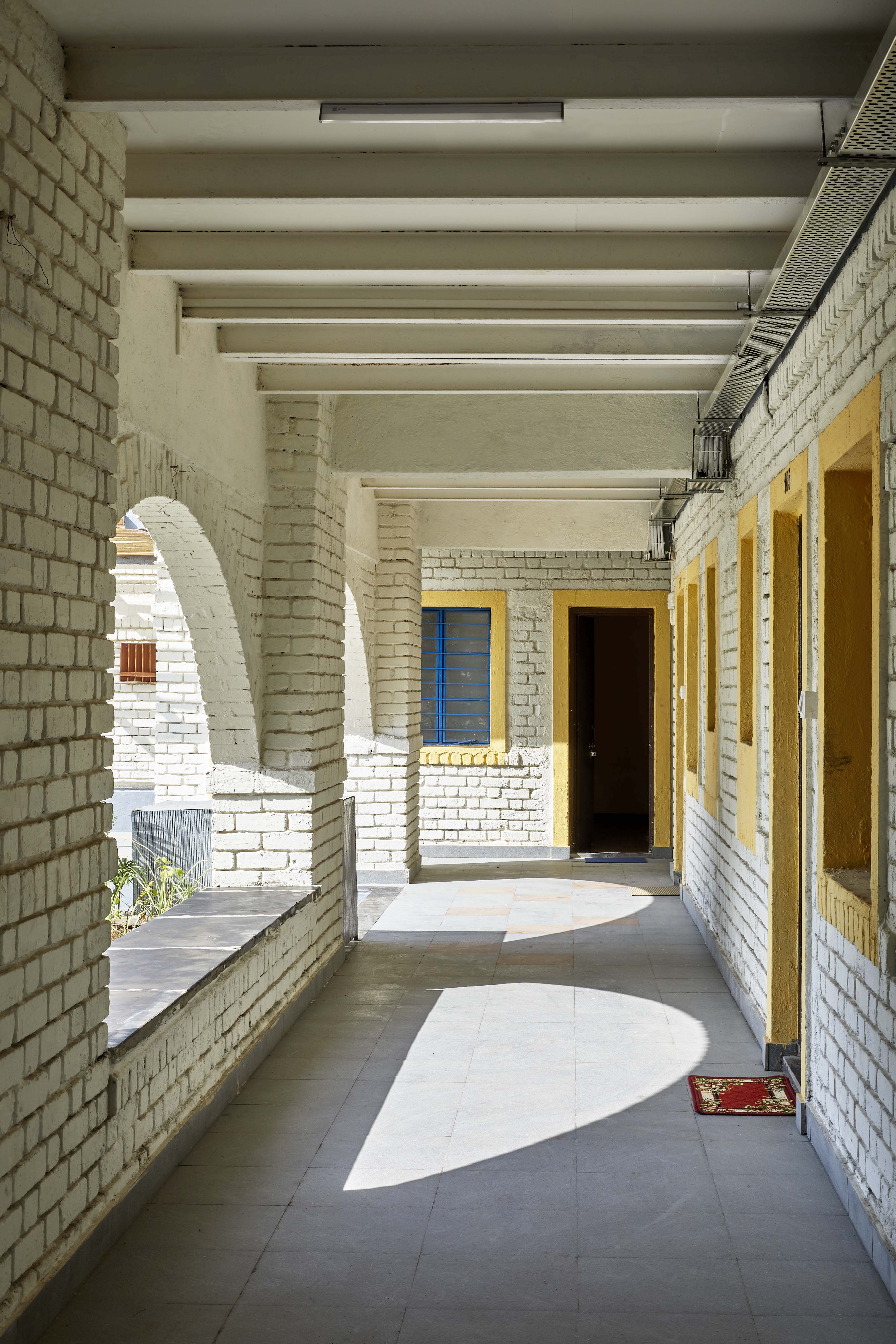 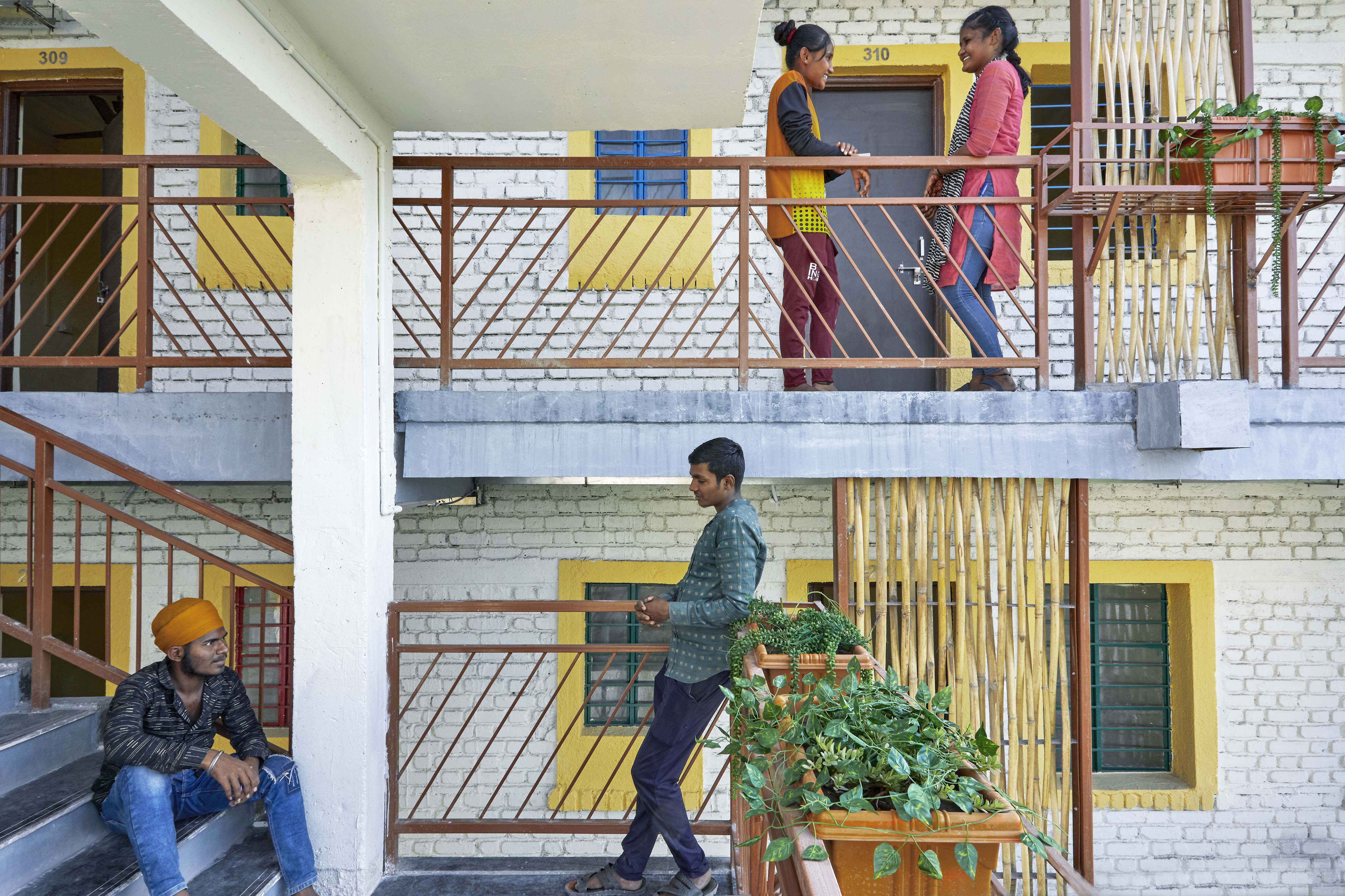 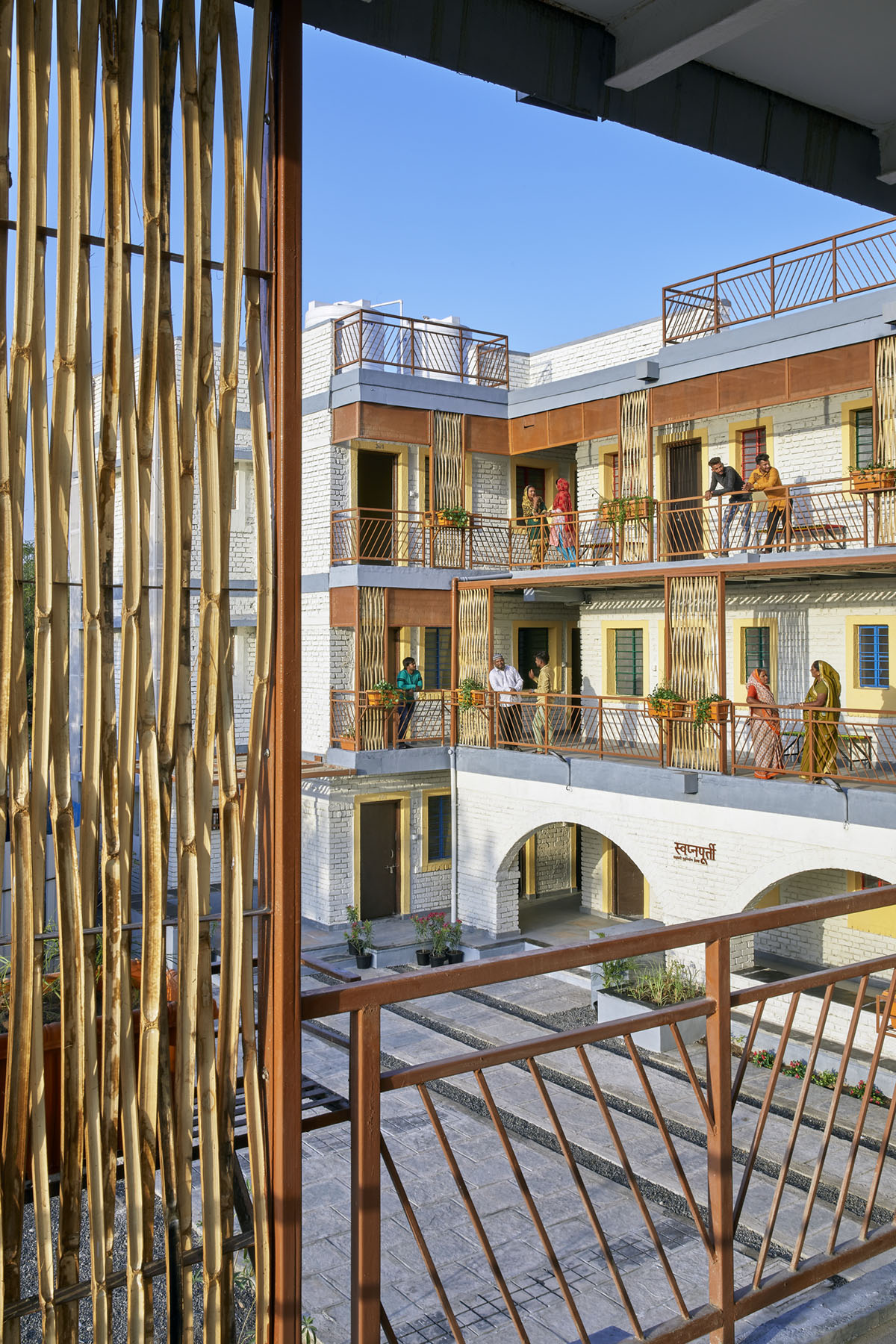 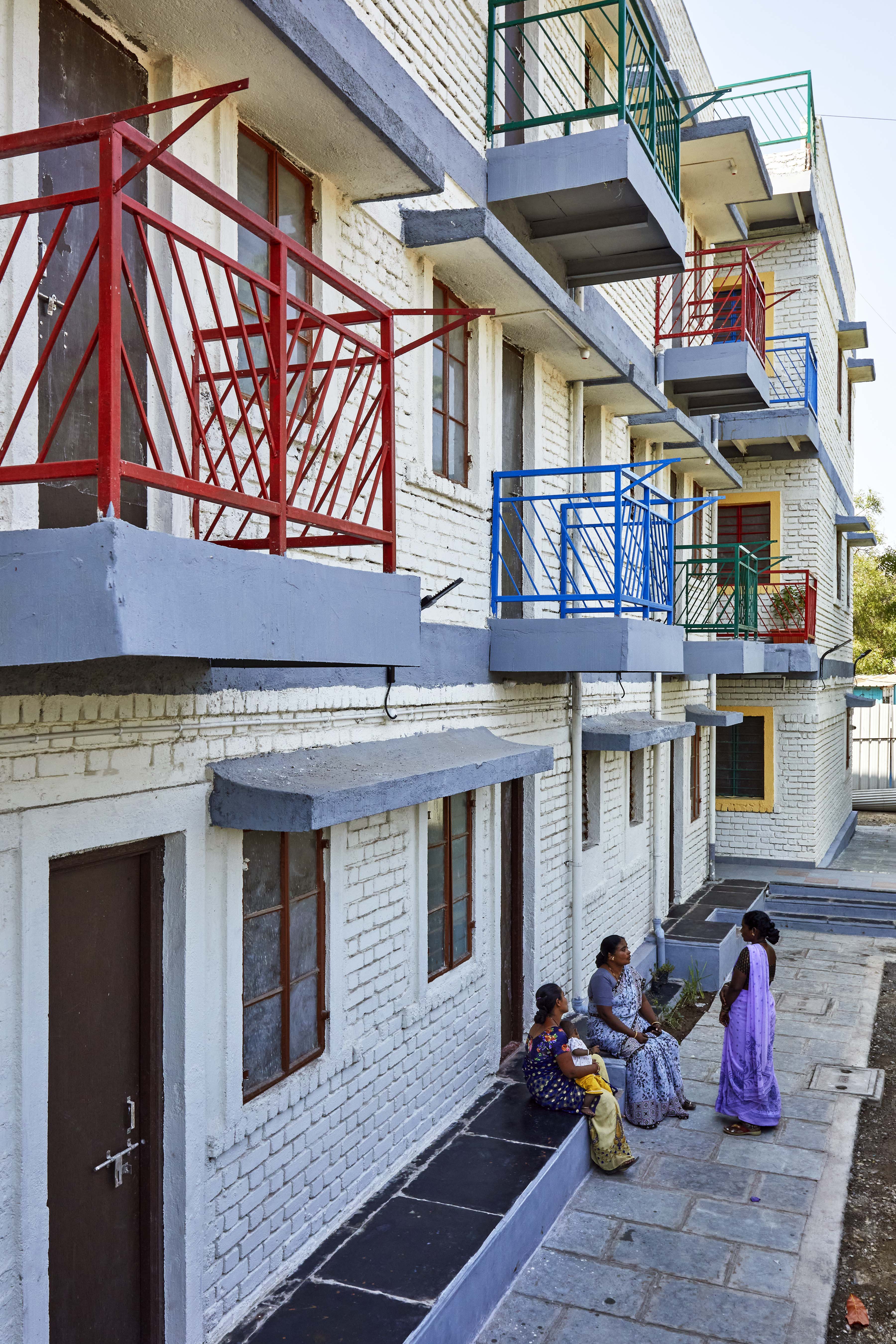 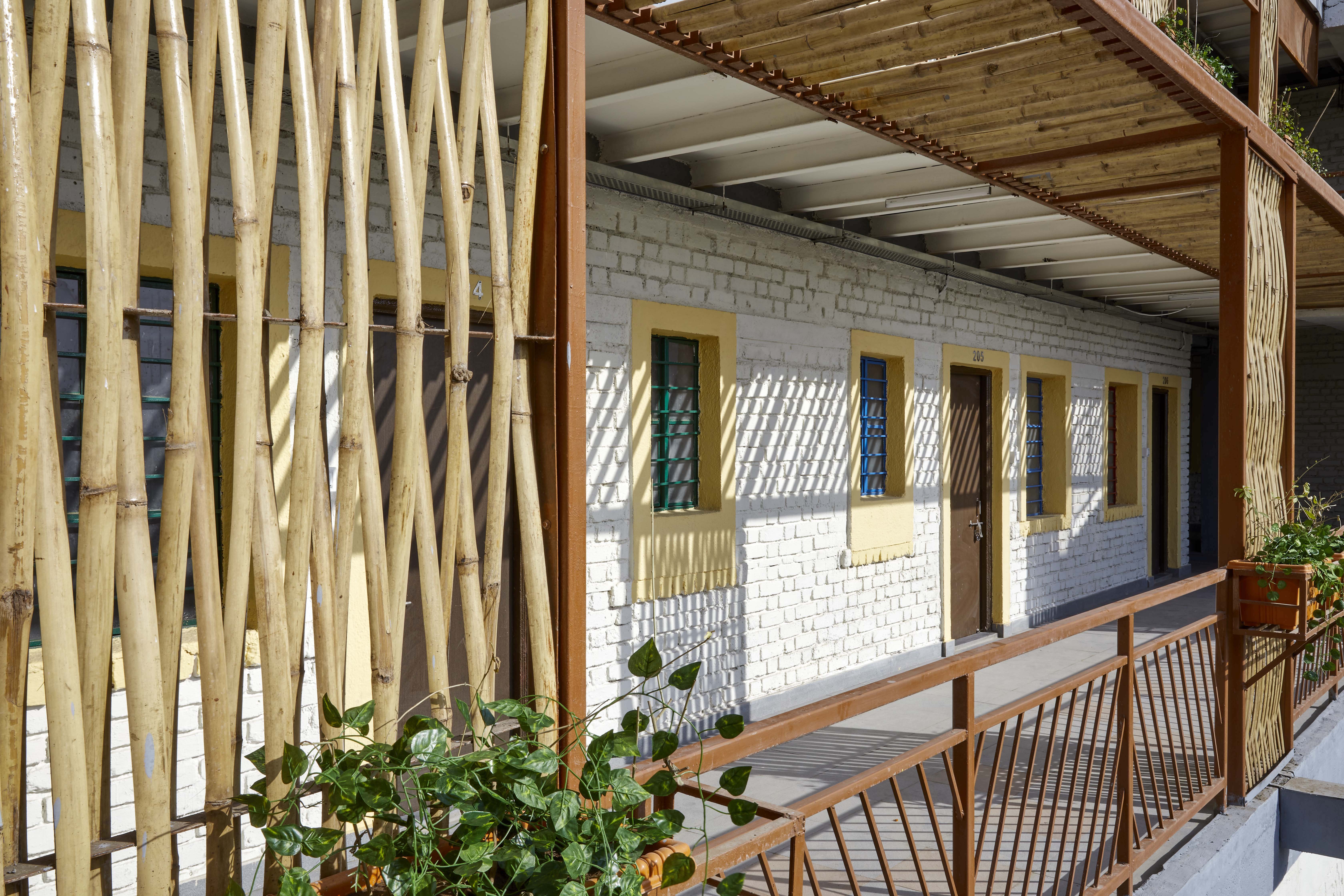 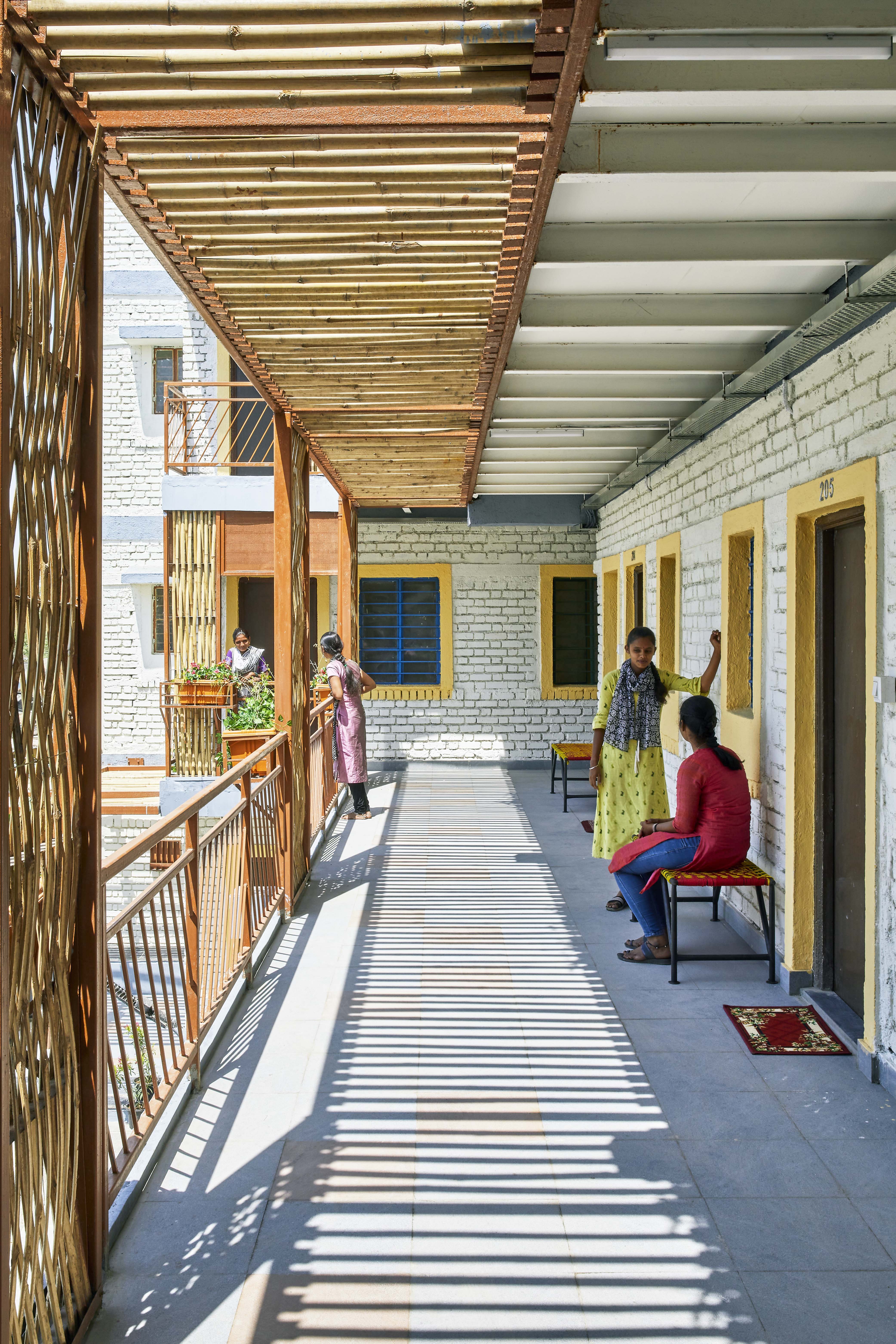 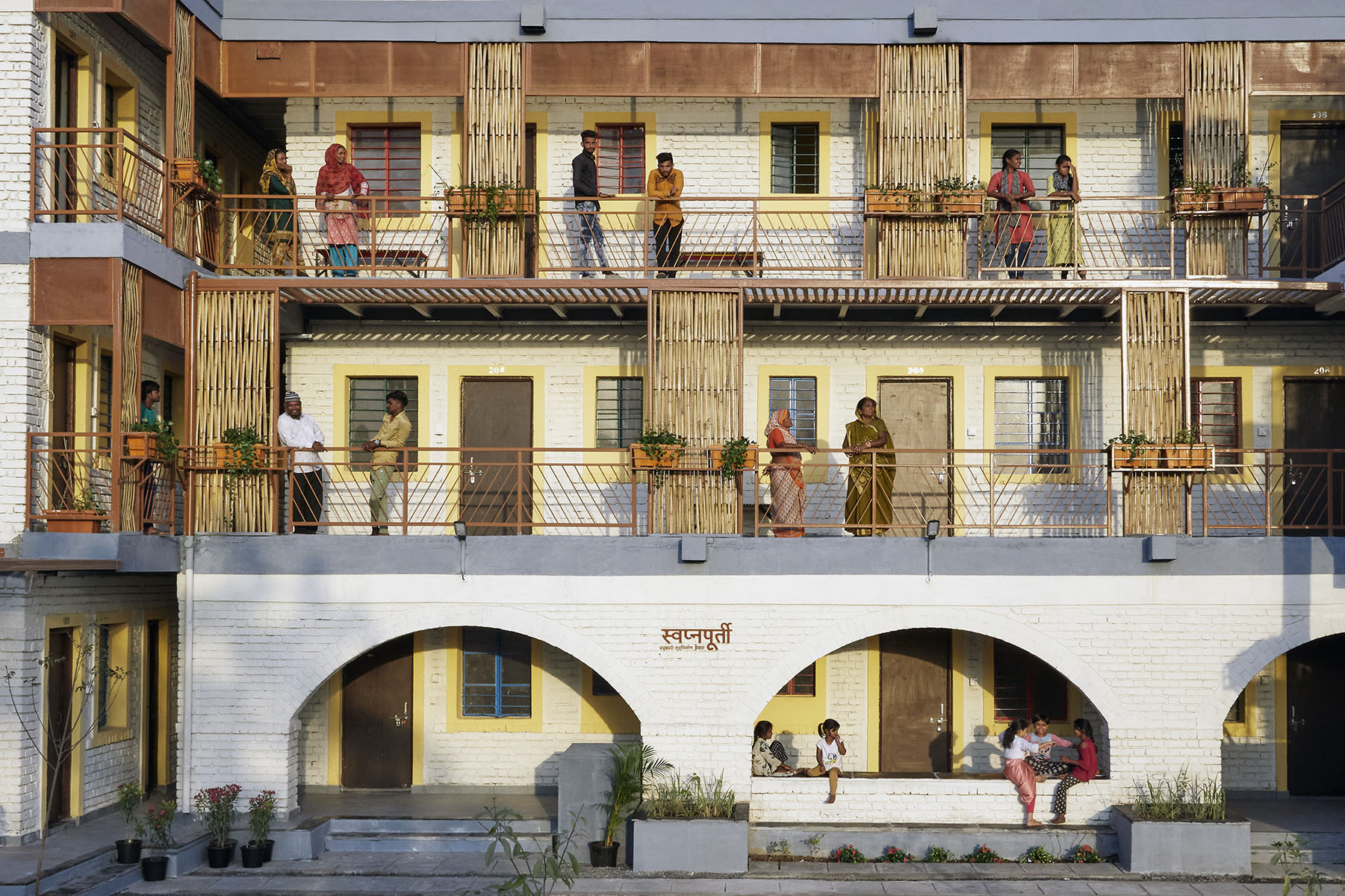 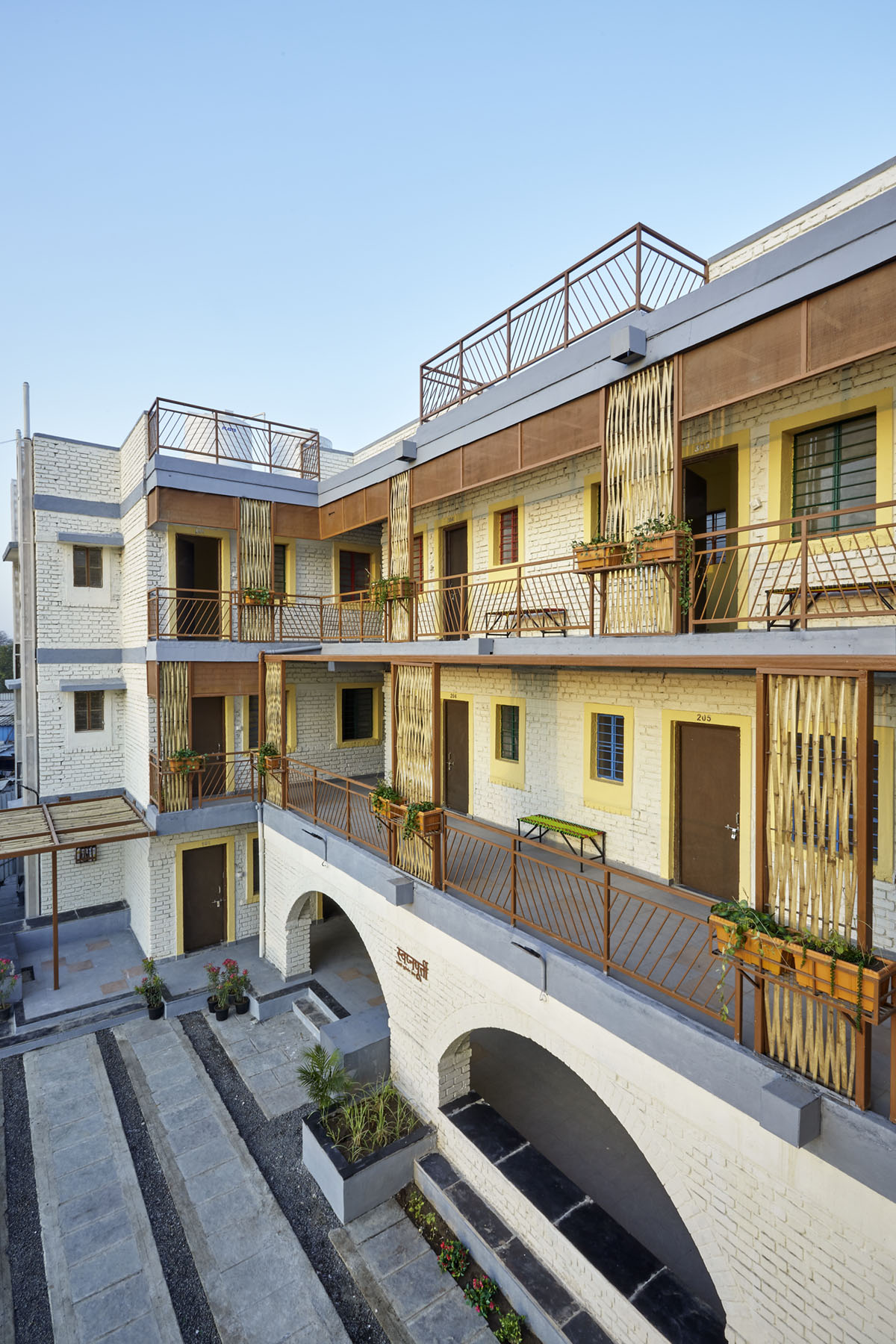 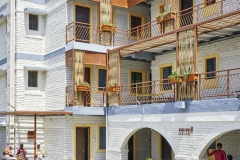 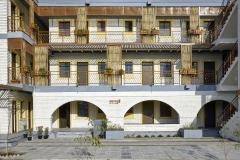 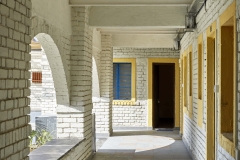 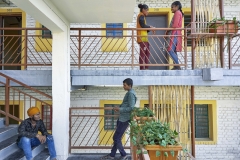 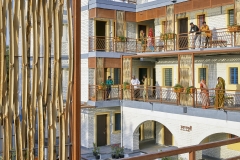 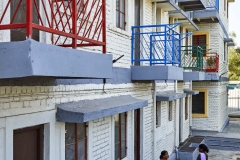 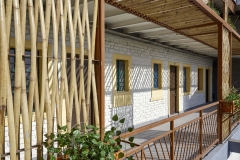 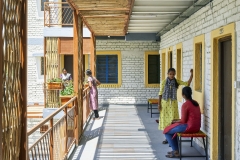 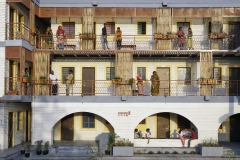 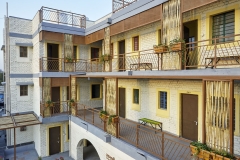 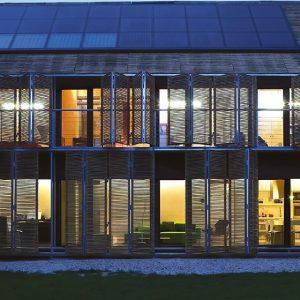