At first glance, the artistic milieu of Mark Bulwinkle appears to be a happy one. Animals cavort, flowers bloom, the sun shines, and a boy’s eyes take the form of hearts. The cartoon-like images seem to be laughing at the viewer, as though a private joke has been incised into each.

Upon closer inspection though, an energy with manic overtones emerges. We notice that a cat is blind, a dog appears rabid, a grin seems more like a grimace, and a trio of menacing beasts swallow each other whole.

These flat, graphic images in Bulwinkle’s ceramic art are the result of his background in printmaking. From paper to ceramic, by way of steel and rust, his narrative imagery is rooted in the perennial perspective of a thirteen-year-old boy, crafted by an adult.

Bulwinkle left his Massachusetts home in 1968, eventually landing in San Francisco. There, he painted houses.  By 1972, he’d enrolled in the San Francisco Art Institute. Eight months later he received an MFA in printmaking.

Next came a stint at the Bethlehem Shipyards, welding “really big things,” where steel and the oxyacetylene torch replaced wood blocks and paper. What emerged were flat, steel sculptures, elaborately produced, expressing sardonic anarchy. Bulwinkle took to mild steel with the same immediacy as paper. He torched directly onto the steel without any prep work. “After all,steel is produced and behaves a lot like paper,” he says. “It’s just a whole lot heavier and requires a tiny bit more persuasion, and, some might say, masochistic determination.”

His sensibilities, both confrontational and humorous, aligned him with William T. Wiley, Roy De Forest, Robert Arneson, and David Gilhooly, all Northern California artists whose works are rooted in wit, playful imagery and popular culture. His Oakland home became a tangled forest of spontaneous steel sculpture, and he joined the ranks of the West Coast Funk movement. By 1987 the reclusive and irascible Bulwinkle was a full-time artist. He sold art to collectors and exhibited in museums. He may have been the first and only person to refuse an interview with Oprah, saying his desire “was to be an artist, not a celebrity.”

Ceramic, with its soft and malleable character is in many ways the antithesis of steel, and also requires fire to complete its life cycle. Bulwinkle credits ceramic instructor Richard Shaw at the Art Institute with teaching him about clay. Not that he actually enrolled in Shaw’s class. No, he snuck into the ceramics studio at two in the morning and taught himself all he needed to know. Shaw had written poster-sized instructions and placed them around the room. All Bulwinkle needed to do was read and follow them. He would leave the studio at seven, as the earliest students were arriving. And he never got caught.

His first ceramic tiles were slip cast molds using an unconventional process to create forms that were so dimensional and intricate that the multiples were often mistaken for originals.He started with a series of phallic bugs, which morphed into tableaux of literal, wounded eroticism. He also created his own steel and wood tile makingtechnique, though he eventually settled on a hydraulic mold process. He carves directly into leather-hard clay, creates a mold and then forms the tile with a hydraulic press of his own making. He considers this repetitive process meditative. Influenced by the Bauhaus principle of melding machinery and craftsmanship to create products with both physical and artistic integrity, he feels that, “like a good brick,” his tiles democratize his art.

All of Bulwinkle’s art is autobiographical. A friendship with a female bartender justly proud of her ample breasts sparked a conversation about copyrighting them. In the tile “Julie” the careful viewer will find the copyright symbol nestled quietly in her cleavage.

Bulwinkle has experimented with glazes, but now prefers his tiles plain and unadorned. It’s in the raw that they most resemble the spirit of his steel work.

“Just because this piece of steel plate is rusty, doesn’t mean it’s recycled – it just means it’s rusty,” he says of a sculpture in his yard.  “I let it rust because that’s what steel does.”

The colors of his unglazed tiles vary in shades of brown depending on where they sit in the kiln – because that’s what stoneware does. And pity the well-meaning admirer who compliments him on the patina of his surfaces. The Latin etymology of “patina” may be shallow dish, but there’s nothing even remotely shallow about this artist, and there’s certainly no patina in Bulwinkleland.

For more information, go to http://www.markbulwinkle.com/

For more on JoAnn Locktov, go to http://www.bellafiguracommunications.com/pages/stepdown_publications.html 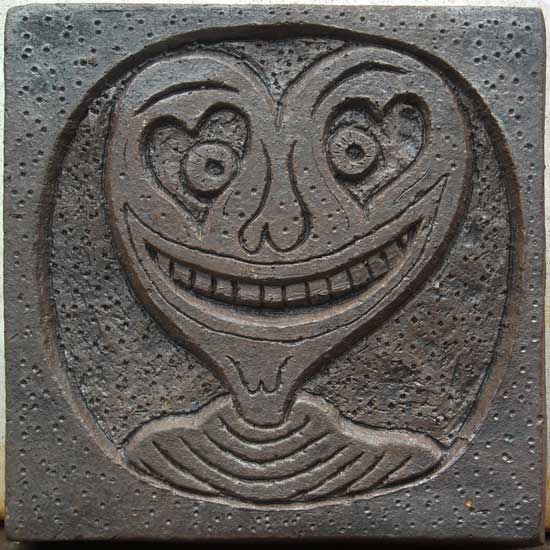 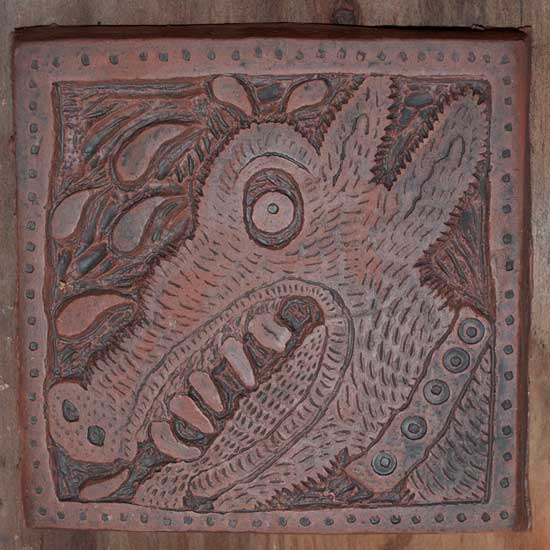 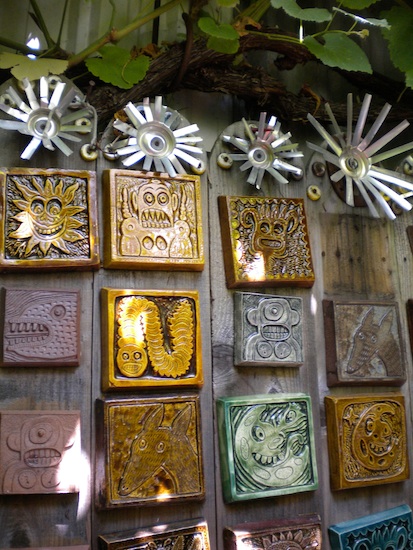 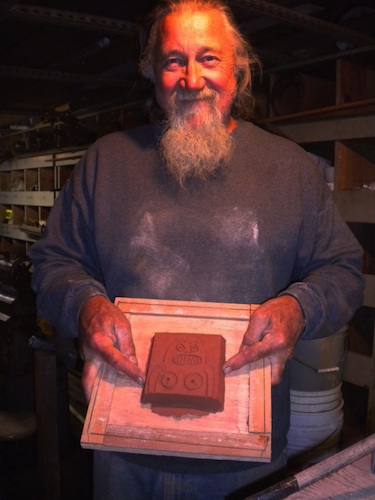 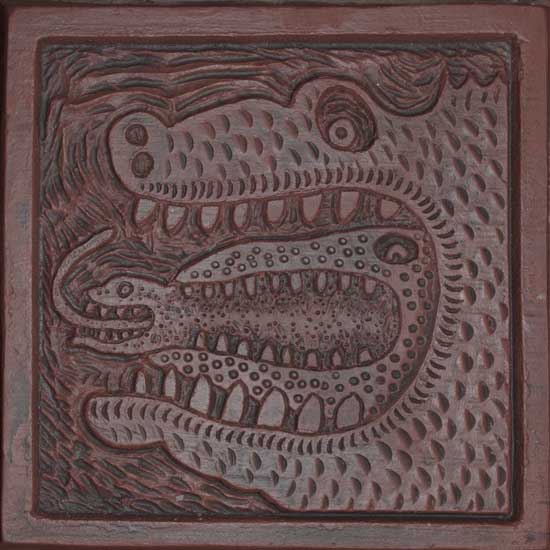 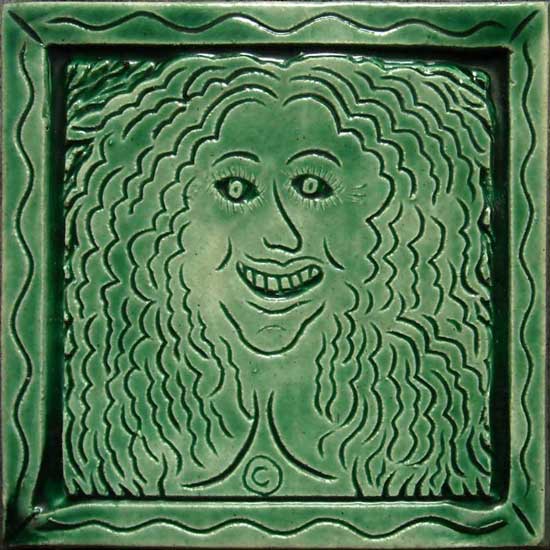 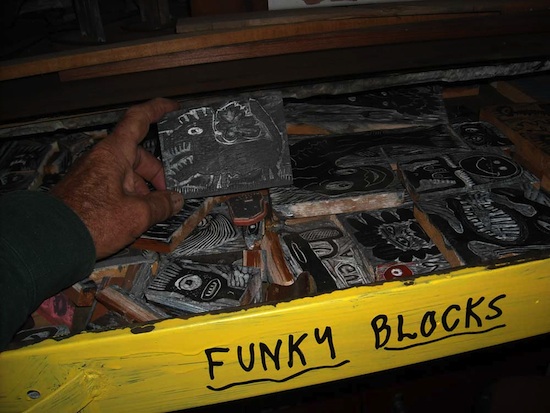 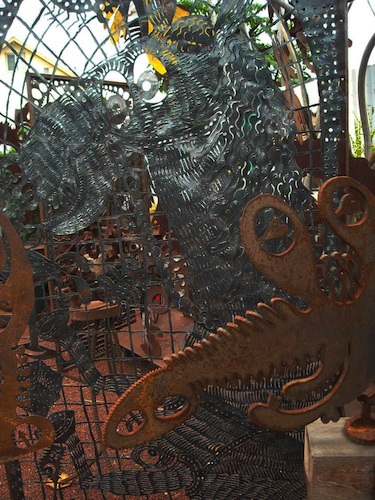 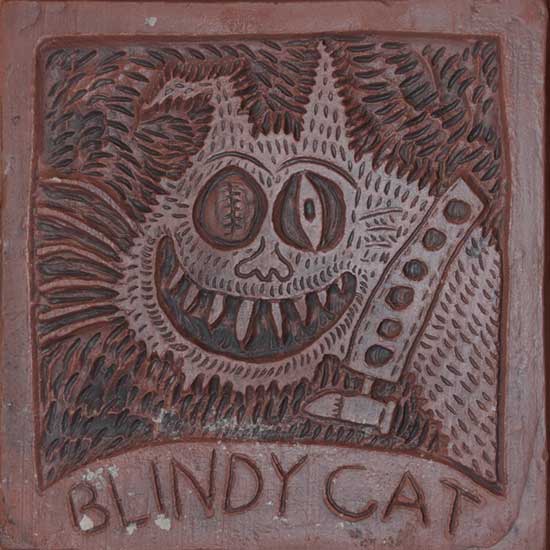 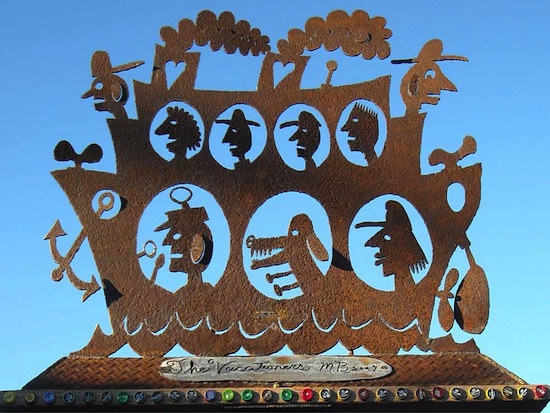 What a treasure! Thanks for sharing JoAnn and Thanks for creating this great work Mark!

BulwinkleLand: what a great art park that would be! Thanks for sharing Mark’s work with us, JoAnn and Mike. A very enjoyable read.

What a great profile of a great artist bi am ashamed to say that Bulwinkle’s work was totally unknown to me before JoAnn brought him into view. Thank you JoAnn and Mike. You two do the possibilities of the Internet proud.

I love these whimsical creatures. They remind me a bit of prehistoric cave drawings and the work of R. Crumb. It would be fun to have a few of them in a fireplace surround telling some kind of story. Thanks JoAnn for sharing.

Why wait for waist-high water from a storm surge in Battery Park a century from now, when you can think your way out of it...