Talk about architectural sleight of hand:

A design team from New York’s RTKB Architects has just squeezed 36 affordable housing units into a six-story, mixed use building in the Bronx.

On the street level, the Allerton offers retail and community space. Above are a mix of 400-square-foot studios, 600-square-foot, one-bedroom units, and 725-square-foot, two bedroom apartments.

The target audience for all units is under market value. “The units start at 80 percent of the Average Median Income and then under that, down to 60 percent,” says Alex Brito, principal at RKTB. “The average AMI in the city for a family of four is $100,000.”

RKTB worked with developer Peter Volandes, principal of Volmar Construction, to make the project a reality. Volandes, in turn, received incentives from New York’s Department of Housing Preservation and Development in the form of low-income housing tax credits to make The Allerton financially viable. “When Peter came to us he’d gone through discussions with HPD and settled on a term sheet,” Brito says.

The agency dispenses city-owned property to developers at a minimum cost, in return for promise of a certain number of affordable units. “The more affordable units, the more the city invests in the project,” he says. “And 80/20 is common, with 80 percent at the market rate and 20 percent are affordable.”

In the case of the Allerton, all of the units are affordable – and profitable for the developer. But the project team’s priority was to make the building sustainable, healthy and comfortable for residents, the kind of challenge that architects at RKTB have been taking on for 60 years now.

Chief among their challenges was an elevated subway line that runs in front of the property on one side. “Our solution was to have smaller window openings facing the elevated line to protect the units from the constant rumble around the clock,” Brito says. “We faced them perpendicular to the elevated line.”

Bee’s façade elevated the windows almost to a clerestory height, compensated for by openings to bring in light and air on other sides. All windows are specified for both thermal performance and noise mitigation. Complementing this strategy, Bafitis located only the bathroom and kitchen of a single unit along that wall on each floor, keeping decibel levels well below the proscribed limits across bedrooms and living areas building-wide.

Outside, the material palette is a  reddish brick to match the character housing stock in the Bronx, along with insulated metal panels and concrete at the street level. “The base of the building on the smaller residential street is precast concrete rather than leaving the brick exposed and the potential for graffiti,” Brito says. “Trying to get that off brick is nearly impossible, so this is a heck of a lot easier to clean.”

Contextually, the building works well with the five- and six-story residential buildings on side streets around it. Next to it on Boston Road, though, are one- and two-story commercial structures, which aren’t likely to be around forever. “We were imagining what will happen to this part of Bronx eventually,” he says. “Currently there’s not a huge need for office space in Manhattan, much less the Bronx.”

But there is a demand for affordable housing – and the Allerton meets it, in spades. 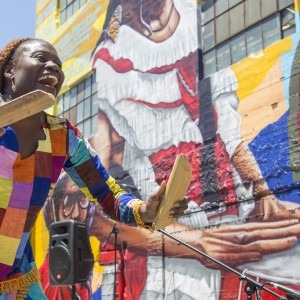 The National Building Museum’s 2023 Architecture and Design Film Festival is taking a long, hard look at how communities...