Today, we’re looking back to a post from March 2013, about one of the great golf courses in the nation, part of a village laid out by Frederick Law Olmsted:

James Walker Tufts knew opportunity and talent when he saw them.

A late-19th century entrepreneur who made his fortune out of soda fountains, he bought 6,000 acres in the North Carolina Sandhills in 1895, at $1.25 each.  There, on an ancient ocean bed recently ravaged by the turpentine industry, he began to envision a sporting paradise for those farther north.

It was to be a winter resort, complete with a New England village.  People suffering from tuberculosis were, he believed, a prime market.

“He thought the pine trees gave off ozone, that the air was clear, and that the water was pure because it was filtered by the sand,” says Audrey Moriarty, executive director of the Tufts Archives.

But he needed experts to develop it.  So his first step was to hire the landscape firm headed by Frederick Law Olmsted, who’d worked on the siting, landscape and forest preservation at Biltmore, near Asheville. “Tufts met him in the morning on June 7, 1895, in Boston,” she says.  “He met with his son in the afternoon.”  They agreed to a plan – at a whopping $300 – for what soon would become the Village of Pinehurst.

Where a barren “Carolina Desert” stood, Olmsted envisioned a pine grove, a village green and a deer park with open spaces and a curvilinear layout for shops, cottages, homes and hotels.  He called for protective thickets of shrubbery between street and sidewalks, to put pedestrians in touch with nature.

Tufts hired Boston architects Burr & Sise for much of the hotel and resort work, as well as Bernard E. Taylor, who designed a number of cottages and residences.  Land outside the village was to be planted with peach trees.

On Dec. 31, 1895, the resort welcomed its first guests for all kinds of outdoor activities, including shooting, equestrian sports, croquet and tennis.  But in short order, Tufts made two discoveries:

“First, that tuberculosis is contagious,” Moriarty says.  “And the San Jose Scale arrived, attacking peaches and deforming the fruit.”

Then a curious thing happened.  Some of the guests began swinging with sticks they’d brought with them at little balls out in the cow pastures.  Others said clearly: “We want golf.”

So Tufts hired Dr. Leroy Culver of nearby Southern Pines to design a nine-hole course, then brought in John Dunn Tucker to add additional nine.  And things began to look up at Pinehurst.

“He began to exclude sick people, but asked: ‘Who can afford to come here?’” she says.  “And the answer was the wealthy, who’d stay the whole season, with their trunks, their nurses and their nannies.  It was like an adult camp.”

The crowning stroke of genius, though, came about in 1900 when he hired a Scotsman, Donald Ross, as the resort’s lead golf professional.  Ross set about reworking the original 18 holes, adding nine more in 1901.  By 1907, he’s finished the fourth set of nine holes. Those last 18 holes were called Pinehurst No. 2, and were recognized almost instantly as a championship course.

So did golf actually save James Walker Tufts’ vision for the village of Pinehurst?

“Pretty much,” Moriarty says.  “We’re on the national register because of it.”

That, along with some very fine urban planning, architecture and landscape design.

For more information, go to http://www.pinehurst.com/ 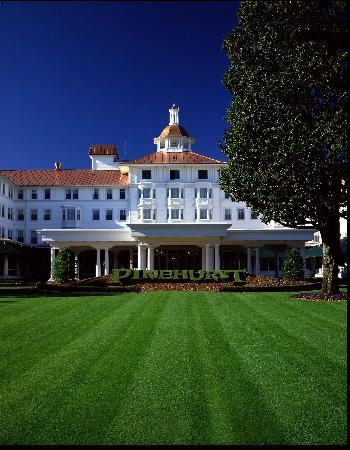 Tom Kundig and His House of Stone

A+A continues its search into the archives today, this time looking at one of the nation's great classical ateliers, in the Sand...