Before his passing in August 2022, I interviewed Wilmington architects Michael Kersting about a home that his firm had designed for their clients on the North Carolina coast. Ocean Home magazine recently ran the resulting feature in print and online, and A+A is pleased to re-post it here today:

Two alums from North Carolina State’s architecture program—one a client and the other a designer—teamed up in 2017 to create a contemporary waterfront home at Pine Knoll Shores.

Michael Schley graduated from the School of Design in Raleigh in 1975. He went to work for a large Houston firm for 10 years, then readjusted the arc of his career trajectory. “I realized that I was not the great design talent to which I aspired,” he says. “And I got into facilities management software.”

The late Michael Kersting graduated from North Carolina’s State’s College of Design in 1990, practiced for three years in Santa Fe, then set up shop in 1995 in Wilmington, North Carolina. When Schley and his wife, Karen, called him about designing a retreat on the beach, Kersting took full measure of Schley’s success: “He jumped out of architecture and into software—and went on to earn enough to hire an architect,” he said.

And not just any architect. Kersting and his associates are known for designing high-end, custom homes on the coast and across North Carolina. Most are contemporary. “One influence for our office is that we’re big fans of architecture built in the 1970s on Fire Island [off the coast of Long Island, New York]” he said. “That’s what we were trying to tap into here, to let the landscape and modern architecture be bold.”

Their clients didn’t want their new home to be a replica of a midcentury modern, but to stand on its own as a 21st-century beach house. Kersting agreed. “We wanted clean and classic, not retro,” the architect said.

On the Schleys’ oceanfront lot, a maritime forest and an 18-foot-tall sand dune offered a pair of landscape challenges. “When we first saw the site, you could barely walk through it because of the wax myrtle, cactus, yaupon, and live-oak tangle,” Kersting said. “And we wanted to preserve that dune as much as possible—it’s our protection, our wall that keeps the water out.”

The Schleys wanted to take advantage of every possible view, so Kersting and his team unleashed a drone to find the best site lines over the dune. They presented preliminary designs to the Schleys, who liked them, but Michael Schley suggested that the architects double-check the vistas. “We then proposed a totally new design that was clear of the dune and higher than what we’d originally selected,” Kersting said. “It was a very good challenge by the client, and the new design turned out to be a much better solution.”

The program for the home, completed in 2020, is two-pronged. First, there are the guests: The couple wanted to invite their extended family to the beach for large gatherings. “We have three daughters with children, and needed spaces for kids and adults,” Karen says. “We wanted enough bedrooms, so there are six bedrooms and five and a half baths.”

But the couple wanted intimate space for themselves, too, for the times when they’re the only ones home. “What we designed was a space where Michael and Karen could feel very comfortable living by themselves,” Kersting said.

The house consists of five levels, built on a hybrid of timber/concrete/steel pilings that lift it up so the architects could explore the spaces between floors. Each half-flight of stairs leads to a specific wing of the house. At the lowest level are the basement and entry, then bunk and rec rooms, then guest bedrooms, then public spaces, and, finally, the Schleys’ private space—with the very best views.

Interior designer Leslie Stachowicz worked overtime to align fixtures, furnishings, finishes, and the Schleys’ art collection into Kersting’s architecture. “Nothing is ornate—there are very clean lines,” she says. “The scale of the furniture is a bit low, for the views and because of the ceiling heights. It was a great way to play with the scale and embrace that space and make it feel bigger.”

Jeremy Bishop, owner of Sterling Custom Construction, was a natural choice for builder, since he earned an architectural education working in Kersting’s office before setting out on his own. “I take the drawings and work with the architect and the client to make their vision come to fruition—with a high level of detail and craftsmanship,” he says. “Here, there were intricate details like mitered corners with cedar shingles.”

The cedar cladding on the exterior will weather to silver/gray over time. And there’s a touch of mahogany in just the right places. “At the porches and entry, where people get closer, the mahogany offers a warm counterpoint,” says project architect Toby Keeton.

“Mobius House” may be pure 21st century, but it’s sited on land once owned by Theodore Roosevelt, the early 20th-century Progressive who said, “Do what you can, with what you have, where you are.”

Surely he’d approve of the progress made here. 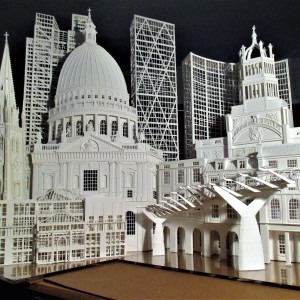 Here we have a feature I penned for the online edition of Metropolis, which was published yesterday. It describes the intricate...