It’s time to set the record straight on this Shou Sugi Ban business.

The correct term is Yakisugi.

Some say that years ago, a Cal Berkeley student misinterpreted a combination of Chinese and Japanese characters – and left us with the misnomer.

“Yaki was written with a Chinese character, and whoever misread it used the Chinese interpretation,” says William Beleck, general manager for Nakamoto Forestry in Portland, Oregon. “It’s really weird for Japanese people to hear that term because it doesn’t make any sense – but it’s used here because nobody knows better.”

Whatever it’s called, the popular charred wood siding is picking up a head of steam here. That’s because it’s low-maintenance and fire resistant.

“In Japan, it’s used on well-built structures, for no maintenance,” he says. “Then they’ll rebuild in 50 to 100 years – they don’t have a painting culture like Europe and the U.S.”

In the West, from the Rocky Mountains to the Pacific, lies a high-risk fire region, so people there are looking for materials that are fire-resistant.

Yakisugi fits that category. “First, the temperature of combustion for regular wood is lower than for charcoal – 800 degrees versus 500 degrees,” he says. “And second, the surface is case-hardened so oxygen has a hard time penetrating it.”

Plus, Nakamoto Forestry’s cypress is the real deal, harvested and processed on site in Japan. “The mill is located in a region that has the highest grade of forestry possible,” he says.

So let’s try and get the name right from now on.

And don’t forget it.

[…] an interior and exterior wood treatment due to the textural beauty of the finished product, called yakisugi or “burned […] 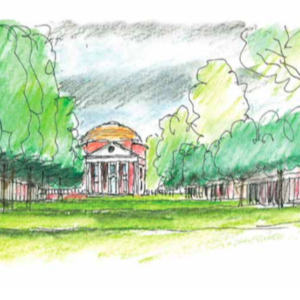 Two prized possessions at my house are a pair of ink and watercolor sketches by North Carolina architect Frank Harmon. They...