Troublemakers is the title of James Crump’s documentary on the groundbreaking land artists of the late 1960s and ’70s.

They worked during an era permeated by assassinations, war and Woodstock, but they were responding also to the traditional European model of canvases painted to be hung upon museum or gallery walls.

Land art was an attempt to break through the limitations of traditional art by working on a monumental scale – outdoors, within the context of the Southwest desert

This new film by Crump – chief curator at the Cincinnati Art Museum from 2010 to 2013 – seeks to explore their intent, which was to take viewers on a journey through that landscape, and to become a captive of the artists. Among those featured are Michael Heizer, Walter De Maria, Nancy Holt, and Robert Smithson. Crump conducted interviews with those still living, and also worked original footage into his film.

“I genuinely wanted to make this film available to a younger generation of artists for them to study them and get in a car and experience them,” he says. “They won’t be around forever.”

Indeed. A number of their works were ephemeral – developed and then reclaimed by nature. Some were created out of ice, only to melt away within days of being made.

But some iconic works have survived. Michael Heizer’s “Double Negative,” an important and influential work, was created in 1969-70 on top of a mesa two hours from Las Vegas. “He made two cuts into the surface, and when you’re on top it’s very lunar and very remote,” Crump says. “It reminds you of your insignificance in space – there’s an immense, domed sky, and it’s about your oneness with the universe.”

In Walter De Maria’s “The Light Field,” visitors are invited to spend the night – to stay for about 20 hours. “It’s a one mile grid of stainless steel rods – at first you can’t see anything but when the light goes down you see this shimmering field,” he says. “It’s about slowing down time, with these subtleties of light, something you could never do in an urban context.”

It’s important for up-and-coming artists to see and experience these works, Crump says, and to learn about them and how they were made. But there’s more to them than that. “Art doesn’t have to be all about money and celebrity and being famous,” he says. “It’s possible to engage your interior life with making art.”

And to see these revolutionary, risk-taking land artists as inspiration for the future.

Troublemakers: The Story of Land Art opens on Friday at the IFC Center in New York. 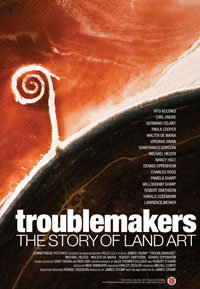 In Seattle, It's 'Intimate Impressionism'

In Seattle, It's 'Intimate Impressionism'

Back in July, A+A featured a post on Intimate Impressionism from the National Gallery of Art, at the Seattle Art Museum (SAM)....