The Dangers and Effects of Speculation

Christopher Marcinkoski is an assistant professor of landscape architecture and urban design at the University of Pennsylvania, and a licensed architect and founding director at PORT urbanism. He’s also the author of the newly released The City that Never Was (Princeton Architectural Press, 2016), a book that examines what happens when worldwide development is no longer in sync with international financial reality. A+A recently interviewed him via email.

What’s the meaning of speculative urbanization?

Speculative urbanization refers to endeavors that actively instrumentalize proposals for—and the manufacturing of—new urban settlement and infrastructure expressly in pursuit of uncommon economic and political returns, as opposed to conventional urbanization activities that are undertaken to meet real (rather than artificially projected) demographic, social or market demand. The phenomenon includes the political re-designation and re-parcelization of land for the specific purposes of raising its market value, as well as the speculative construction of housing, infrastructure, and urban amenity by both public and private entities. These projects are significant in physical size (usually hundreds of hectares or more), and are primarily deployed in peri-urban or greenfield contexts.

What’s the history of speculative bubbles?

Examples of speculative building can be traced as far back as ancient Rome, and have been a recurrent phenomenon throughout history. However, over the last 20 or so years, the phenomenon has substantially intensified, leading to an increased incidence of severe environmental, economic and social consequences as a result.

What about the Spanish Miracle?

While there are numerous examples of speculative urbanization to be considered—especially within the last 15 years—no case has been more dramatic than Spain’s most recent miracle-cum-crisis in terms of its speed, its extent and its consequences. The reason for this is simple. Other than perhaps China, no country in recent history has used urbanization activities to a greater effect than Spain, which rose from peripheral European actor in the 1980s to the ninth largest economy in the world by 2009. In addition to the nearly 7 million homes built during the boom period—which got most of the media’s attention—the country undertook massive expansions of its mobility infrastructures, as well as its public amenities and tourist facilities based on population projections and economic forecasts that simply failed to materialize. In this sense, the story of Spain is not the story of a few greedy developers. It is the story of a widespread subscription to urbanization activities as the ultimate panacea for a country’s long-standing economic and social ills.

What’s become of the half-built cities begun during the U.S. housing boom and bust?

What’s the intent of this book?

The intent of the book is two-fold: on one-hand, it calls attention to the increasingly dubious urbanization activities that characterize contemporary city building pursuits, particularly in developing economies where this substantial capital investment could be employed to greater effect elsewhere. On the other hand, the book calls attention to the design and planning disciplines’ complicity in these speculative activities, calling into question the means and methods of these professions given the volatility and risk increasingly associated with their work. In essence, the book challenges urban design to stop focusing on the singular, preferred outcome of a project, and instead look to develop systems of urbanization rooted in strategies of contingency, modulation and adjustment that can actively respond to changing demands and external inputs in near real-time.

Its inspiration was a trip through Spain in 2010, where I found expansive urbanization activities literally frozen in time in seemingly every polity, from villages of 300 residents, to metropolitan areas of 3-million. This was not the post-industrial urban vacancy I was familiar with, but rather a 21st century condition of abruptly aborted urbanization.

What are the lessons learned from the 2008 housing bubble bursting?

It depends who you ask. If you look at China, the Middle East and Africa, it doesn’t appear much was learned when it comes to the rationality of urbanization activities.

It is worth pointing out that a shared trait of many of the speculative events seen throughout history is that they optimistically emerged out of a period of economic turmoil only to produce another period of severe turmoil. For example, the 1920s Florida Land Rush is widely considered to have scared investors away from real estate to such an extent that they unintentionally inflated the U.S. stock market leading to the crash of 1929. The dot-com bubble of the late 20th-early 21st centuries was also shown to have contributed substantially to inflating the housing bubble as capital went in search of more “stable” investments which real estate was perceived to be. One might presume that the growth in the stock market seen over the last 5-years might represent a similar response to our most recent real estate related crisis.

The likelihood of seeing another such bubble in the future?

It’s not a matter of if, but when…and to what extent. Simply put, the speculative expansion of settlement and infrastructure will continue in perpetuity, and any suggestion otherwise should be met with considerable suspicion.

*Image credits and captions are required exactly as printed here with any image use in print or online:

Caption: The physical traces of the boom and bust are inscribed across the Iberian Meseta.
Credit: © Christopher Marcinkoski

Caption: Roadways that do not service any buildings or facilities have been closed off to vehicular circulation to minimize the amount of infrastructure that must be maintained, 2014.
Credit: Ricardo Espinosa

Caption: Current state of Los Berrocales as of August 2014. The billboard advertising the PAU has been present throughout the economic downturn.
Credit: Ricardo Espinosa

Caption: An overscaled and incomplete public realm throughout the Ensanche de Vallecas exacerbates the sense of emptiness and abandonment within the PAU, 2014.
Credit: Ricardo Espinosa 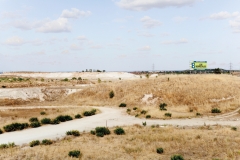 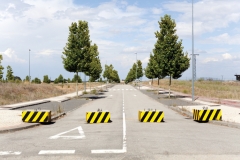 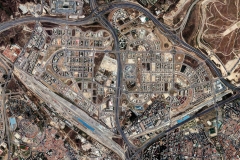 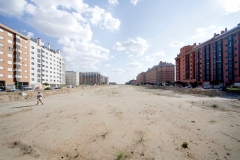 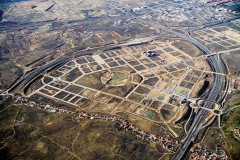 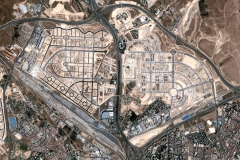 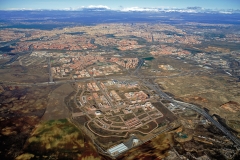 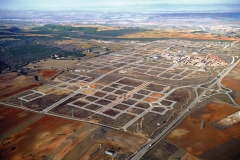 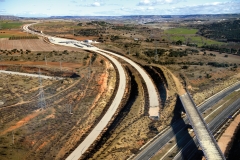 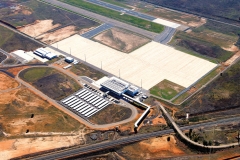 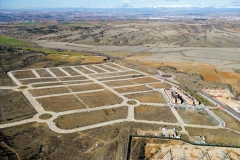 A Tour of Iconic Houses in Los Angeles

A Tour of Iconic Houses in Los Angeles

A+A first became aware of the ICONIC HOUSES network when Michael McCarthy, who with his wife, Marsha Myers, restored Richard...