If anyone can testify that necessity is the mother of invention, it’s David McAdam.

In 2003, the former marketing and public relations executive bought a piece of desert property in Yucca Valley, Calif.

Buyer’s remorse set in the next day.

“It was a pile of rocks and trees, and I knew I’d never build without bulldozing it all flat,” he said.  “I looked for ways to float it out, but an architect friend said that the only way to do that was to use expensive structural steel.  I felt dejected.”

Then he hit on the idea of light gauge steel, the kind used to build mezzanines in warehouses.  It’s lighter, it’s galvanized when it’s cold-formed into a “C” channel, and it’s less expensive than hot-formed structural steel.  It can be bolted together, rather than welded.  And it normally sits on a factory floor, rather than depending on walls for support.

“I totally stumbled onto it,” he said.  “I wanted something to fly out over the rocks, something that was useful in a rough terrain, so that the creek could run under it.”

What he stumbled on, precisely, was a point-loaded, bi-directional, moment resistant method of building.  His Rock Reach House now sits on six columns bolted to concrete columns sunk two feet into the rock.  And its columns and beams resist bending in case of earthquakes.

He started out with just his own home, then realized that his construction method might be appealing to a larger segment of homeowners.  After all, it was quick and sturdy, and it minimalized waste.

“We build the pieces of the house in the factory, and deliver them to the site on a truck,” he said.  “There’s no waste on site, and what’s wasted in the factory is recycled.”

Moreover, once the kit of parts is delivered, a home can be framed in three days, enclosed in five more, and completed in six weeks.  It could be done with two workers, but it’s quicker with six and a small crane.

The result is a structure made up of long, open spaces reminiscent of a miniature Farnsworth House.  “There’s no need for load- bearing walls,” he said.  “We use posts at the four corners, and another at the middle of each long wall.  Our pieces can span 35 feet, unsupported.

The smallest structure in his portfolio is 1,000 square feet; the largest, 2,000 square feet.   “Pound for pound, steel is more expensive than wood,” he acknowledges.  “But less material is needed, so it’s very close to stick-built.”

The price?  An affordable and sustainable $250 per square foot.

For more on Blue Sky Homes, go to http://www.blueskyhomesllc.com/ 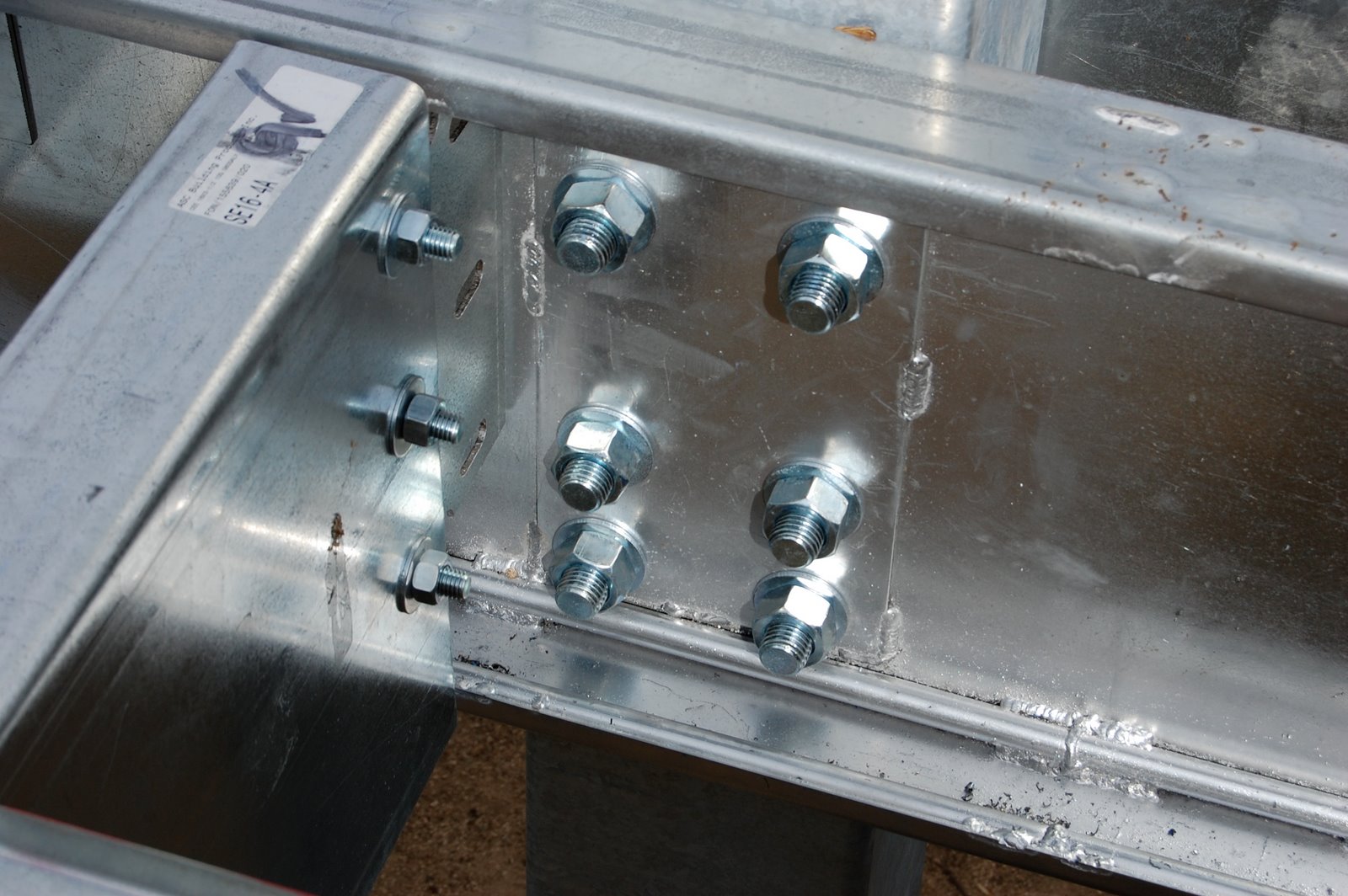 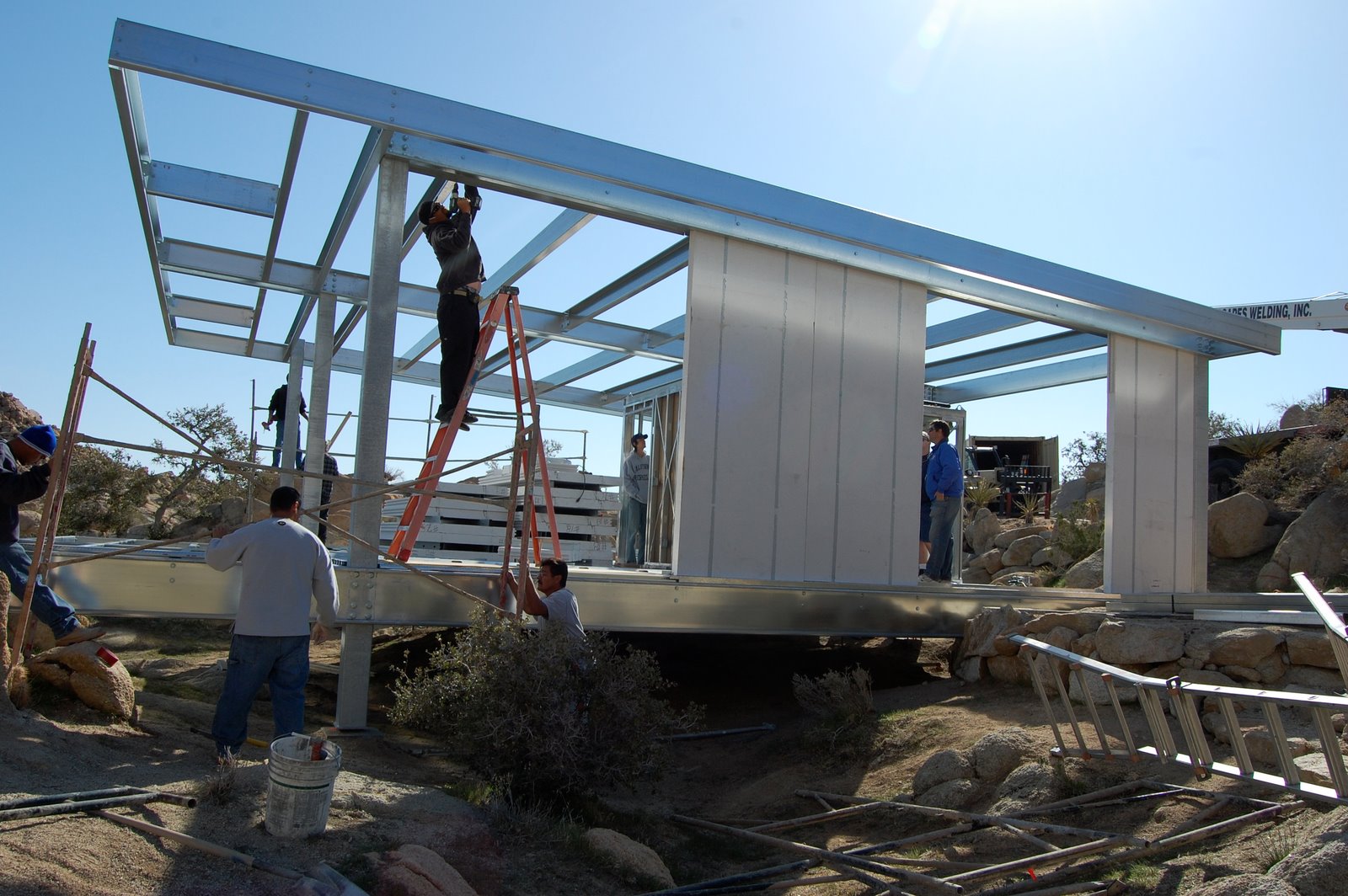 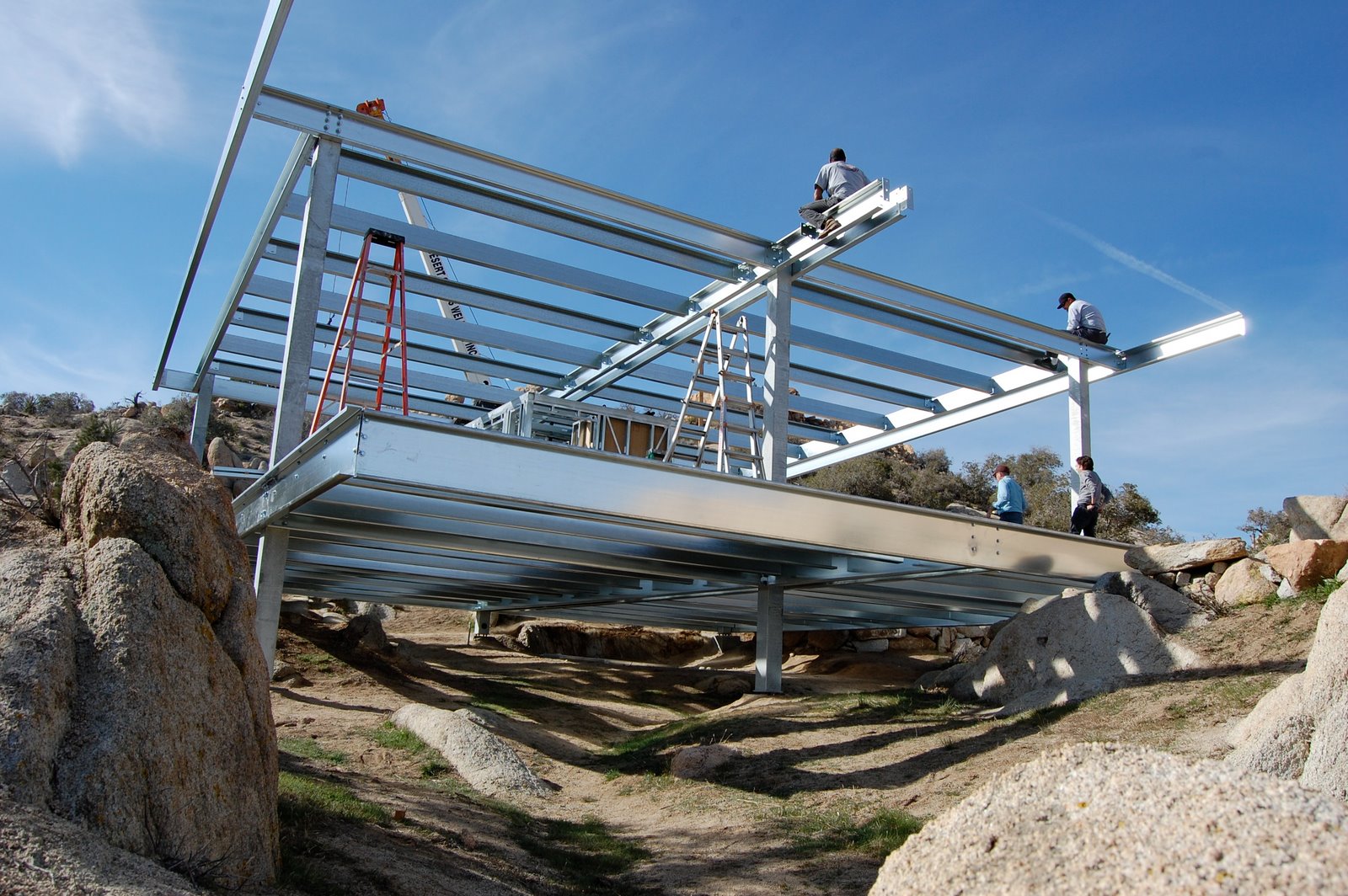 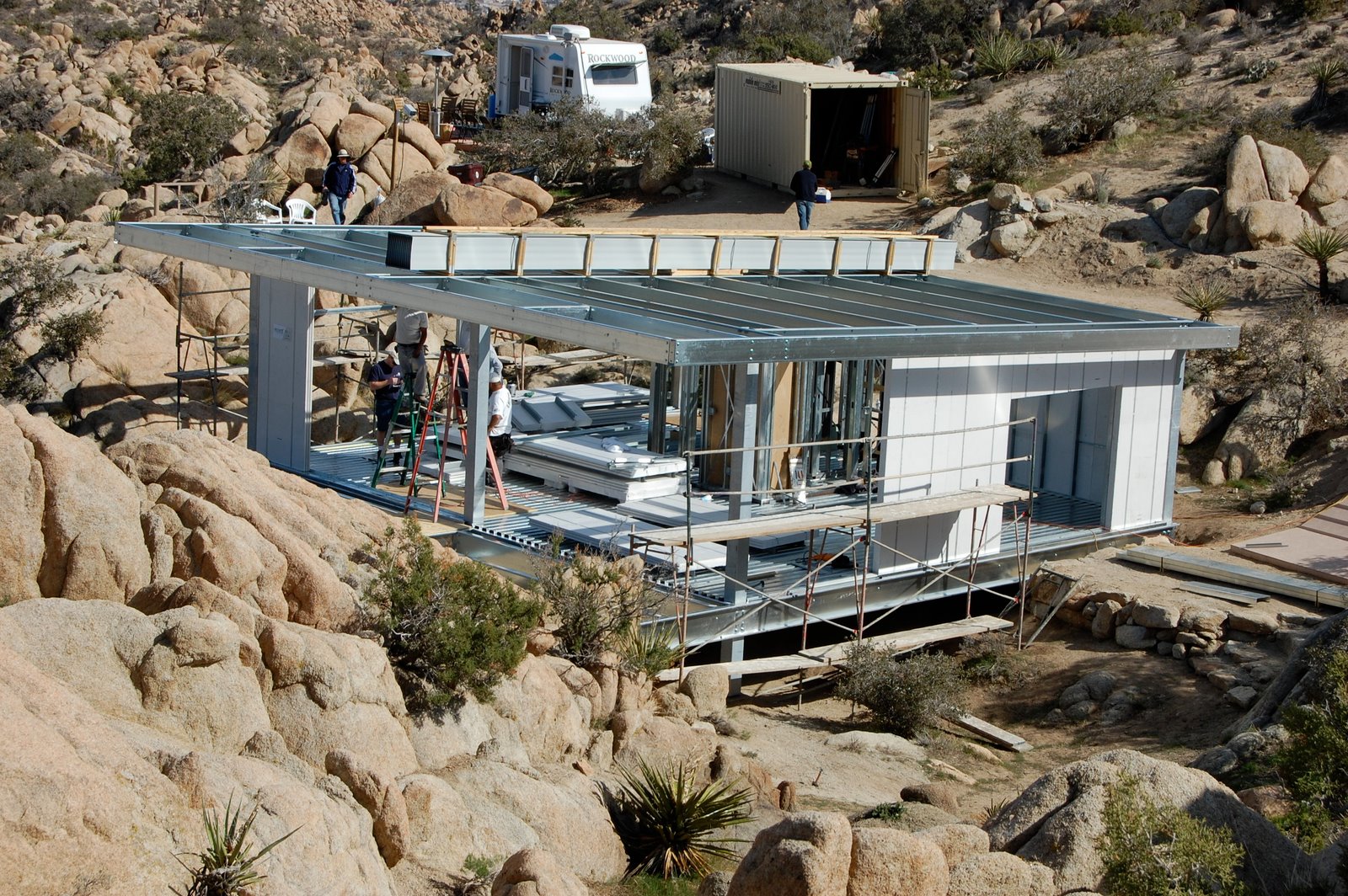 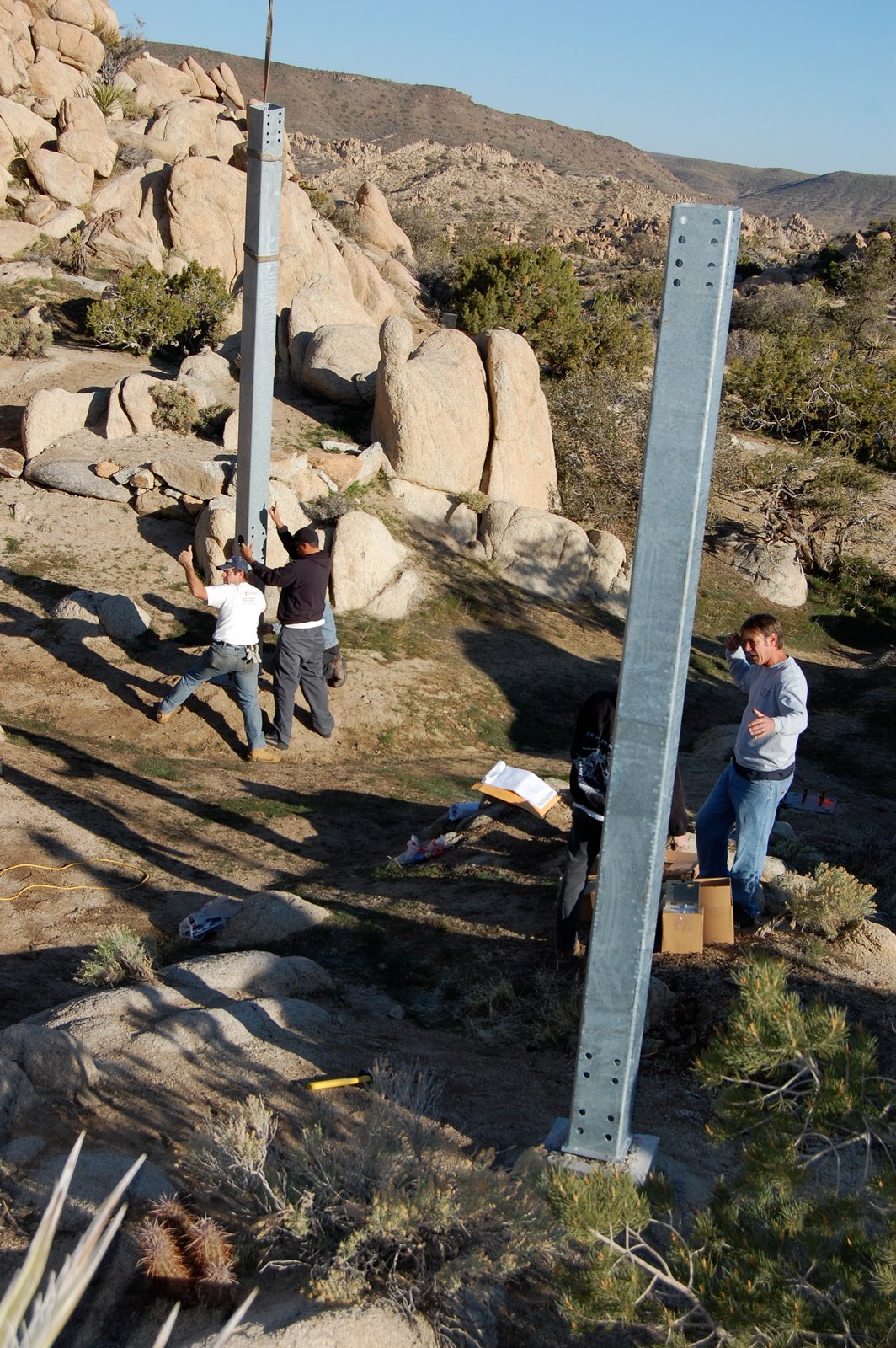 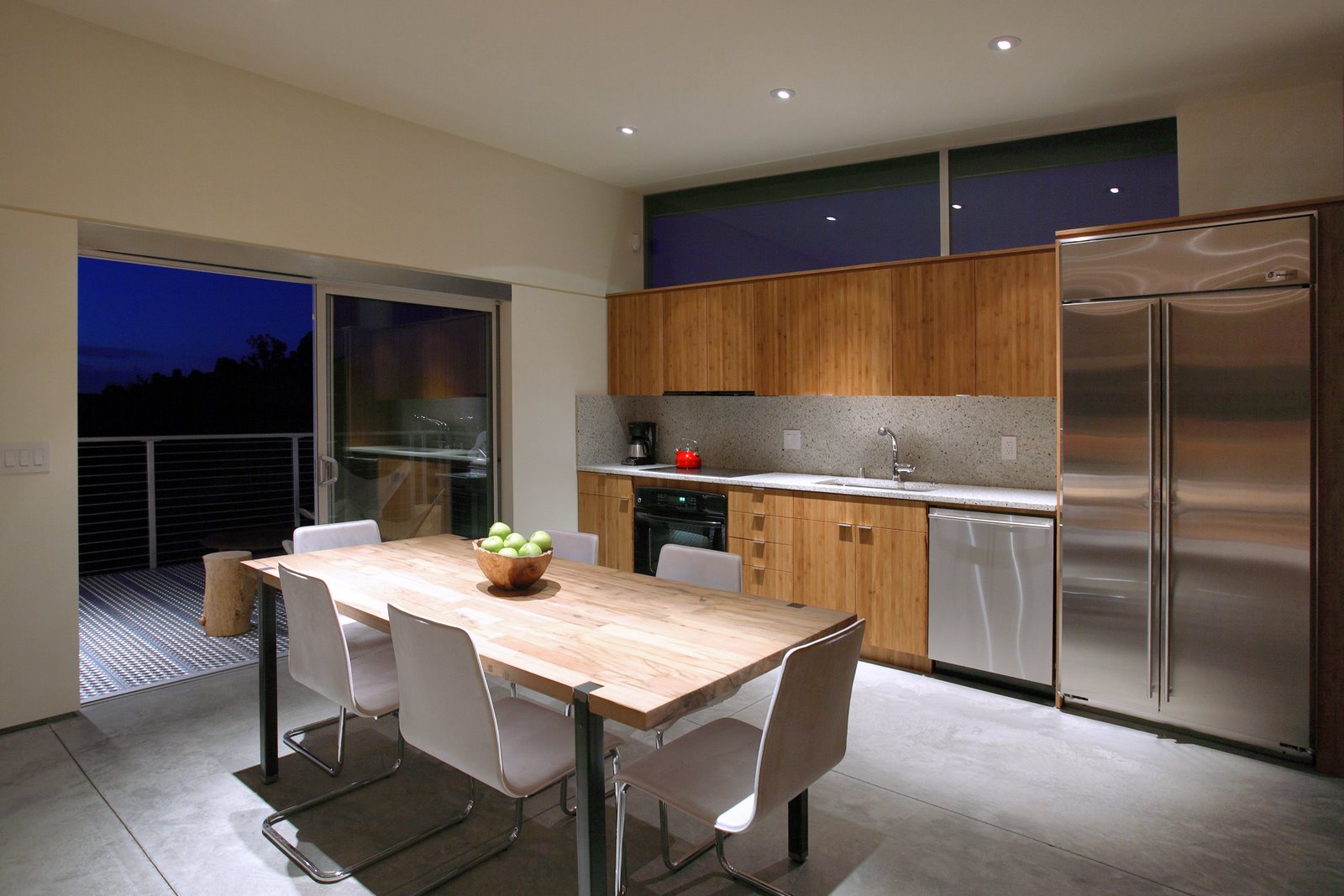 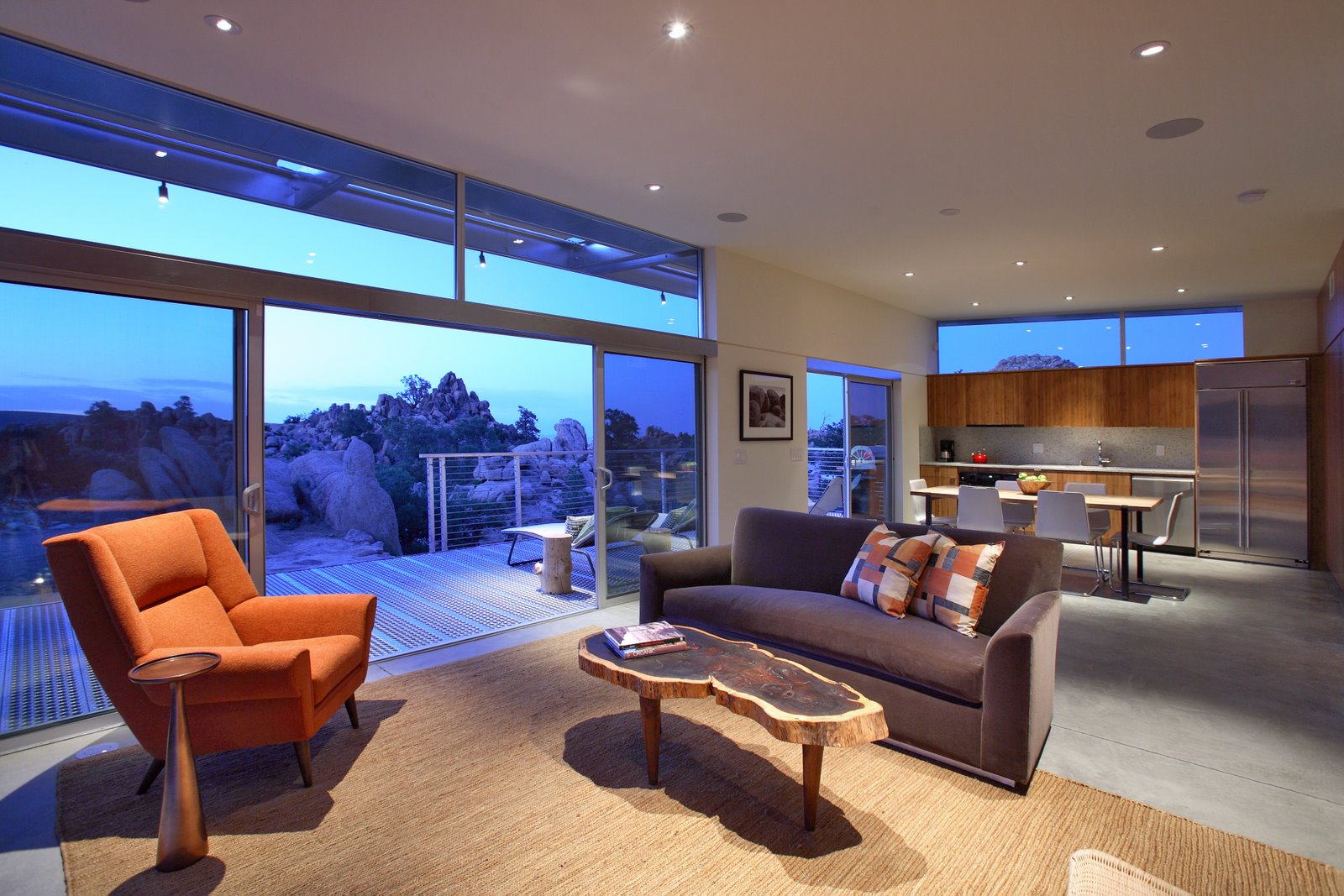 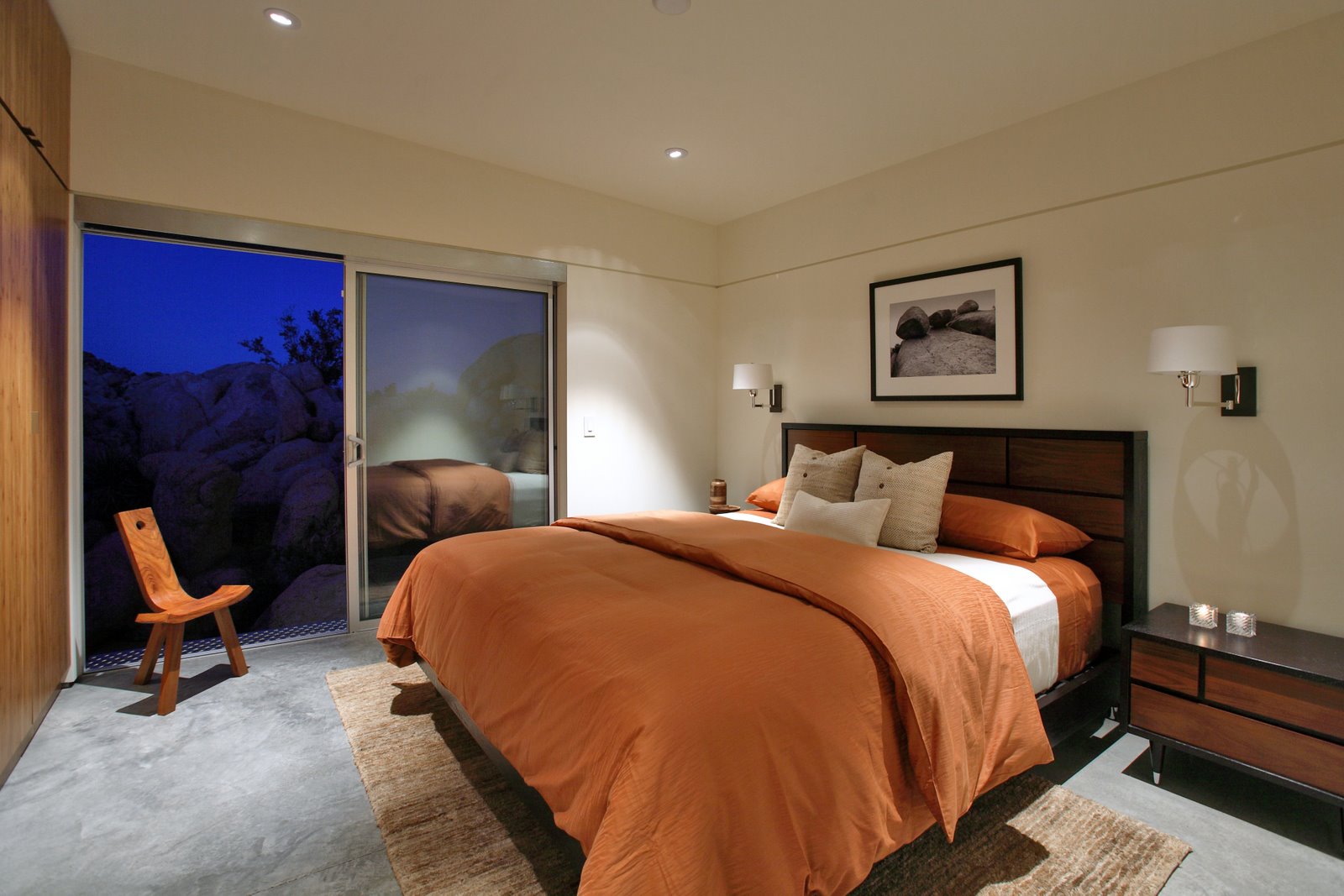 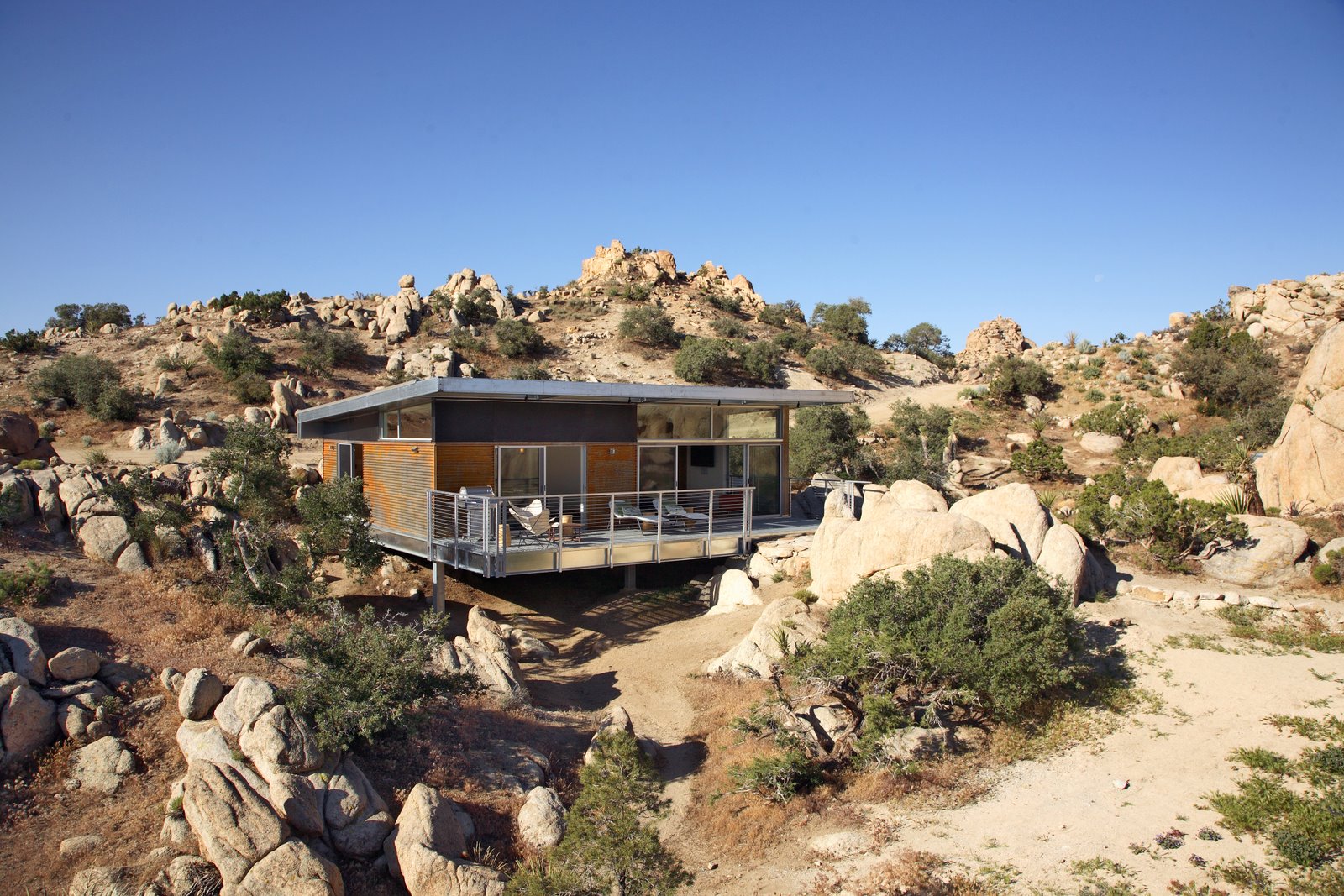 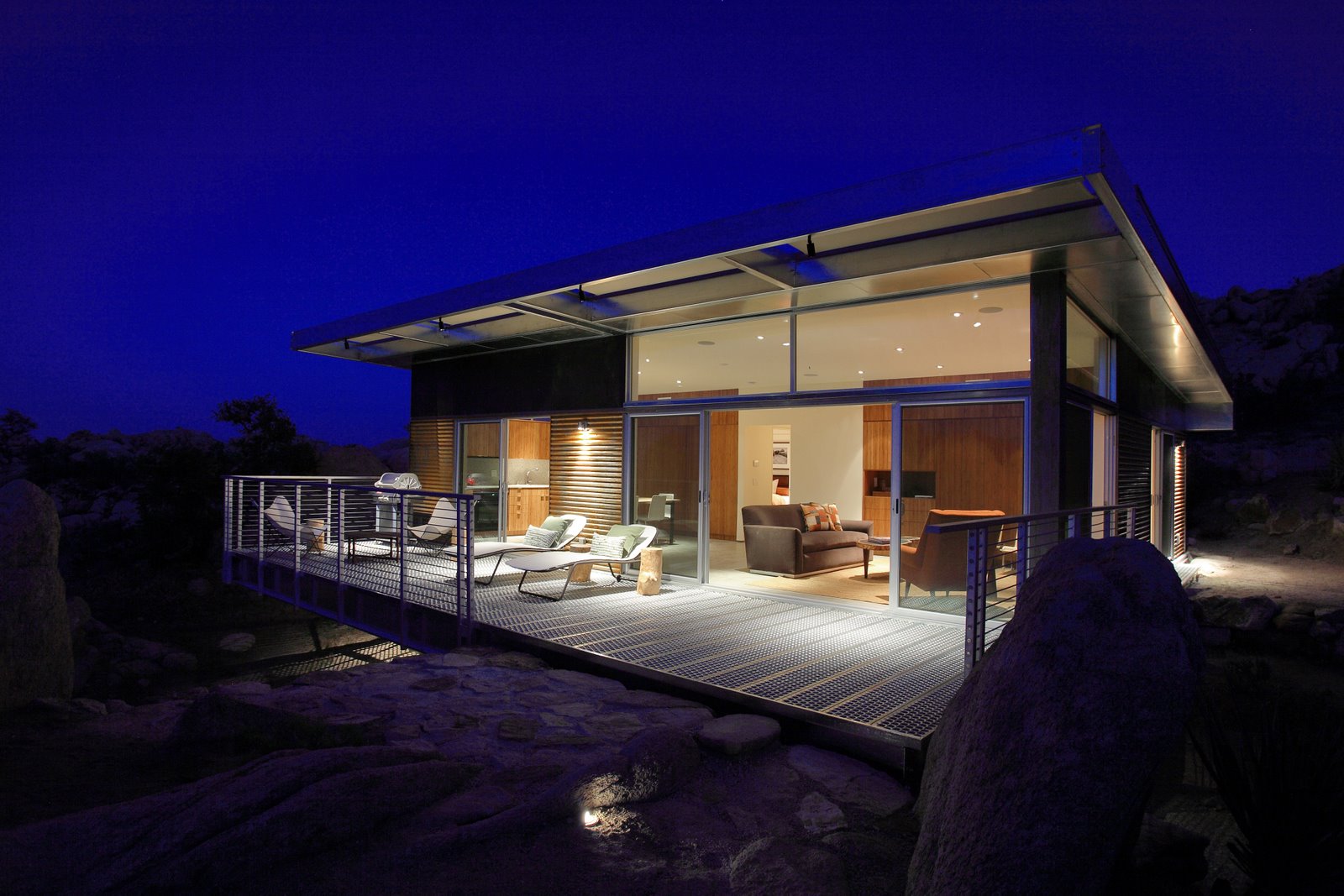 Great project. This would have a great shot at winning a prize at the Holcim Awards for Sustainable Construction. Have you considered submitting it?
http://on.fb.me/holcim-awards

One can’t help but think that Frank Lloyd Wright would be pleased on a number of levels. In a building next to his 770th...