Bob Trotman is a philosophy major from Washington & Lee who turned to fine furniture making after a few years of teaching school in Virginia.

Now, 30 years later, the Winston-Salem native lives in the foothills of North Carolina, working solely as a sculptor dedicated to making wry and poignant commentaries on corporate America.

He works in soft white linden and poplar native to Carolina, carving it into ironic sculptures laden with messages of enigmatic and ambiguous irony.

“He’s saying that life might seem perfect, but underneath there’s turmoil, flux and change,” said Linda Dougherty, chief curator of contemporary art at the North Carolina Museum of Art (NCMA).  “Don’t be too satisfied or too certain, because at any moment you can lose your moorings and the ground can shift.  There’s the idea that a sense of stability is false.”

His aptly named “Inverted Utopias” exhibit will open at the NCMA on November 7, running concurrently with a Norman Rockwell exhibit through January 30, 2011.

The two artists could not view the world more differently.

“I’m trying to present a wooden world to the viewer that’s something like Norman Rockwell but with a large dose of Karl Marx and Franz Kafka,” the artist said.  “I’m not a big admirer of Rockwell.  He said he portrayed life as he wished it were – his view of life is much more sweetened than the real thing.”

All chains of authority are in place with Rockwell’s work, while Trotman works hard to present a populist vocabulary.  “Rockwell endorsed institutional values,” he said.  “My view is to criticize them.”

The oldest piece in the show, “Swan Dive,” on loan from the Sydney and Frances Lewis Collection, recalls the graceful, forward-thrusting sculptures once attached to prows of sailing ships.

“A Charlotte art critic called my work ‘figureheads on a clipper ship bound for purgatory,’” the artist said.  “But really, it has to do with power, and pulling the rug out from people who might occupy positions of power.”

For more on Bob Trotman, go to http://www.bobtrotman.com 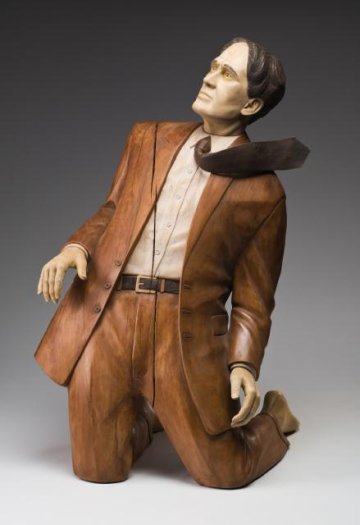 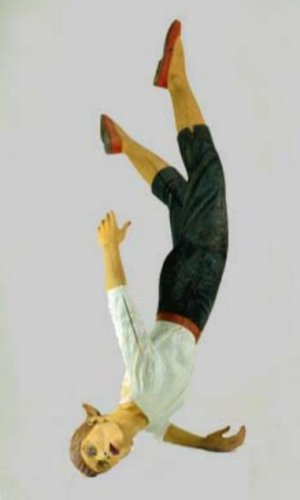 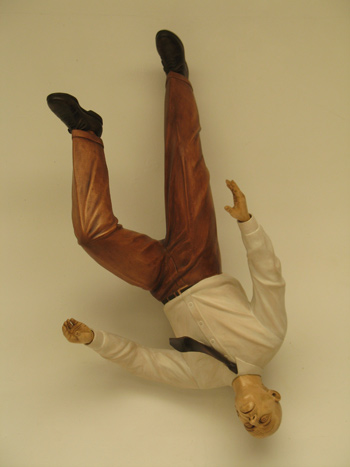 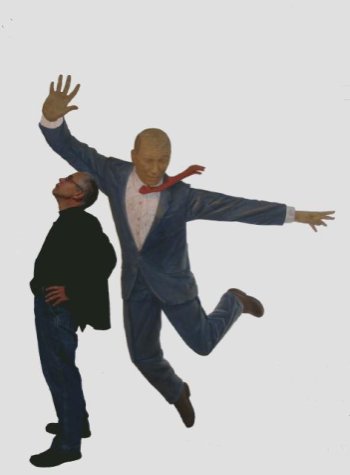 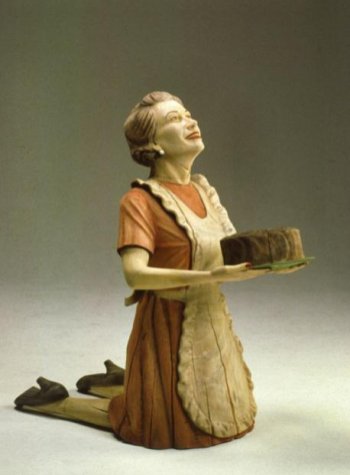 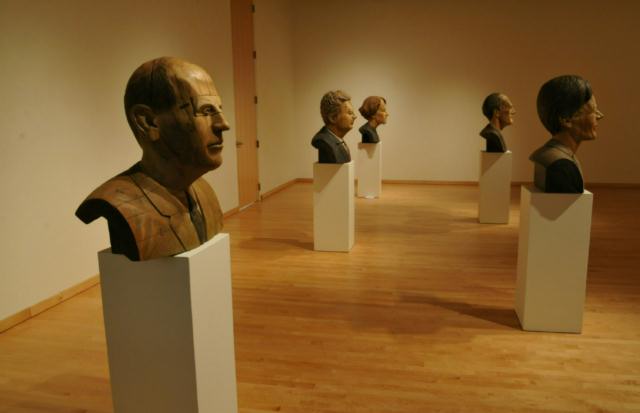 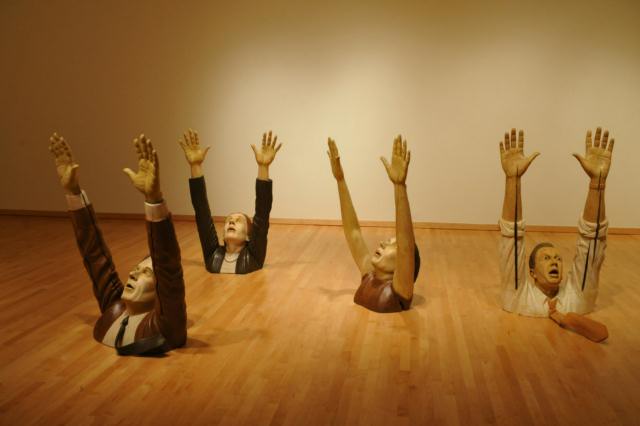 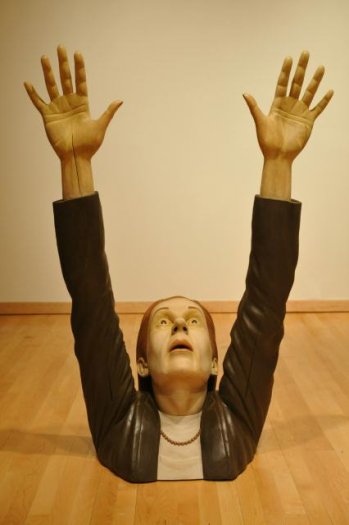 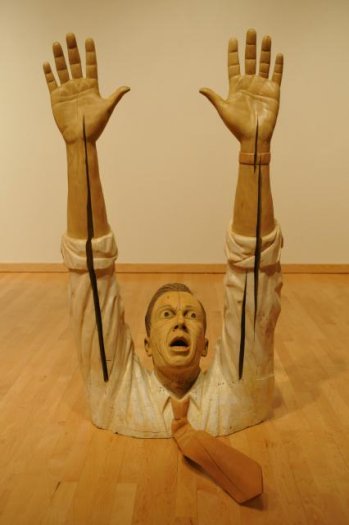 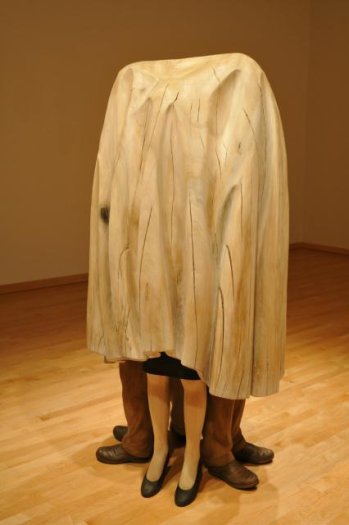 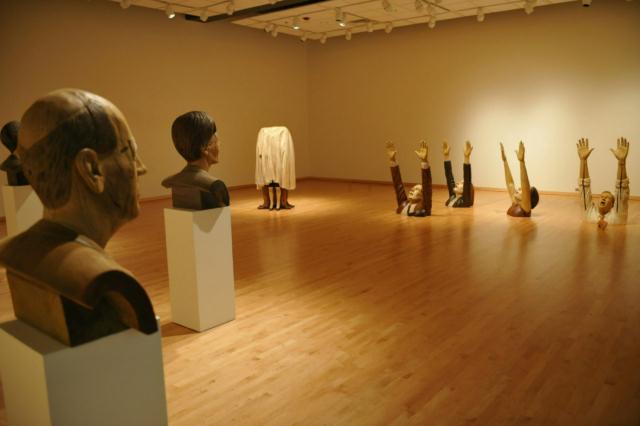 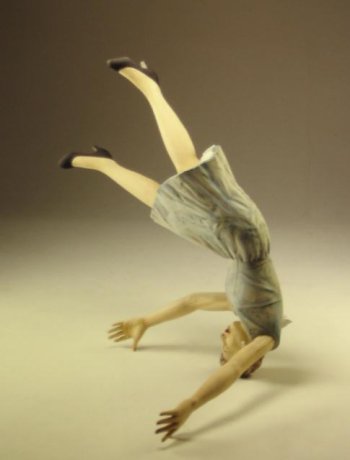 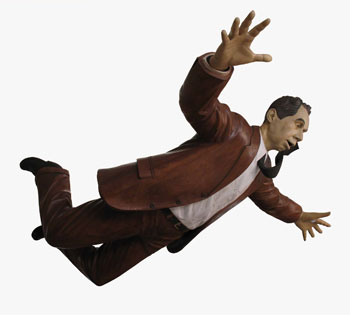 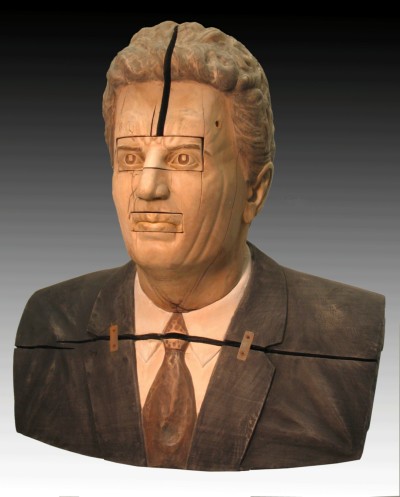 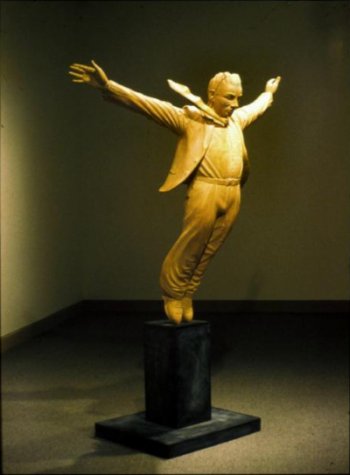 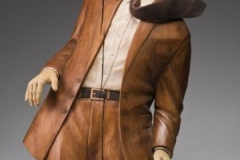 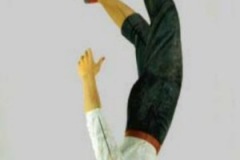 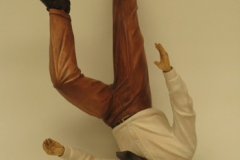 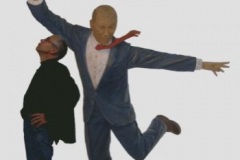 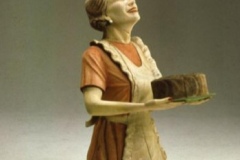 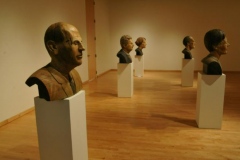 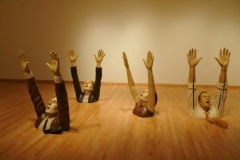 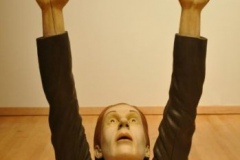 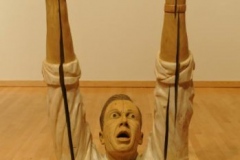 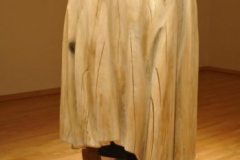 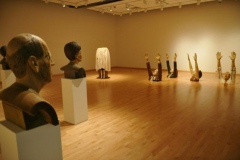 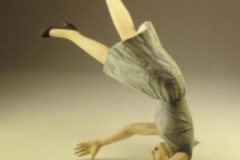 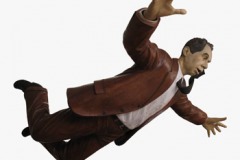 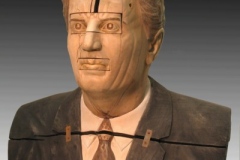 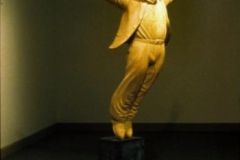 Architecture for the Rest of the World

Great post! These sculptures have a nice feeling of movement. I would really like to see them in person, especially now that I know m ore of where the artist is coming from.

Bob Trotman quietly takes a bite of life and it’s everchanging drama ,chews it up and spits out a piece that makes it’s viewer relate to something in their own life’s saga /journey… he doesn’t spell it out for you- his art makes you think and question….to me- that’s good art.

Bob Trotman is the antidote to Norman Rockwell. His work captures the inherent optimism of our (immigrant) America while at the same time exuding the unease associated with a society where the average CEO makes more than 500 times the average worker’s salary, if you count stock options, and gosh who doesn’t (Canada manages at 21:1, Germany regulates at 11:1). The disquieting sense that one is a health care crisis away from bankruptcy or a stock market kerfuffle from retirement is confidently carved into wood by a North Carolina master.

I see cognitive dissonance, reified. It isn’t so much that the sculptures are disturbing; they are, but it is worse than that; it is that the sculptures rip away the fictions and expose disturbances that had been hidden under the cultural membranes. Trotman reverses the figure and ground of our assumptions.

Looks like the bosses are not in Kansas anymore, but caught up in a corporate cyclone. No telling where they might land.
Looking forward to seeing the show in Raleigh.

I love the pairing of Trotman with Rockwell.. point and counter point. Utopia and dystopia. Trotman brings to light an important shadow side of corporate power and keeping up appearances within the domestic realm. Congratulations!

What I like about Trotman’s work is his strong element of wry humor. So much of humor is about being a bit off kilter. No other current sculptor has his intelligent perspective combined with such a light twist. The sense of motion in a lot of his work is delightfully unsettling. Due to the humor and motion of his art, I believe his work will stand the test of time. There will always be power figures off balance.

I had seen photographs of Bob Trotman’s work before I saw the ‘real thing’ so to appreciate his genius I had to see his work in person. The way he uses the ‘natural designs’ that are in the wood is amazing. Foresight of his intention and the outcome are a sight to behold. You look at it and wonder, what is this artist thinking! That’s what I like about his work, it makes you want to talk about it with others and get their perspective.

I appreciate Bob Trotman’s work on so many levels.Aside from the provocative social commentaries that lie at it’s core,the images & characters he presents paired with the masterful craftsmanship itself, make his art appreciable to citics and scholars, as well as to an audience that may be less idealogically inclined. The way that Bob preserves the inherent integrity of the wood and incorporates it’s quirks and flaws into the sculptures is beautiful and inspiring.

I have followed this artist’s work for several years and his talent and creativity continues to amaze me. I look forward to the November opening!

I have followed Trotman’s career for many years and continue to be amazed by the freshness his work. I look for mystery in art and Trotman does not disappoint. I study his striking images with intellectual curiosity and amusement. I look forward to many more years of surprises from him.

Architecture for the Rest of the World

Like Doctors without Borders, Architecture for Humanity seeks to use its volunteer members’ professional skills to find...