Now she’s reinterpreting the work of Erté, the Russian-born artist who took Paris by storm in the early 20th century.

“He was known as the king of Art Deco when he started in the teens,” she says. “He was working in a lot of stage decoration and fashion illustrations, so he did a lot of costumes for theater productions, and inspired a lot of opulence in period fashion.”

Just 18 when he moved to Paris and changed his name from Romain de Tirtoff, he soon shifted from theater design to cover illustrations for Harper’s Bazaar and Vogue magazines. The feminine form was his favorite.

Not to mention the panther. “They’re everywhere in Art Deco,” she says. “The Panthers are symbolic of independent female spirit – and grace and beauty.”

Thus the name of New Ravenna’s latest collection, La Panthère. They’re three-feet-by-six-feet panels of jewel glass, each depicting women, panthers and trees in a neutral palette. “They’re positive and negative tones, all laid in 24 carat glass,” she says. “And they harken back to the original New Ravenna mosaics.”

She’s talking about the work of New Ravenna’s founder, Sara Baldwin, who established the mosaics firm in the 1990s. It’s been primarily a woman-inspired concern ever since, which makes the panther-as-icon even more significant.

“We are primarily a female work force – that’s personally where our roots come from,” Irminger says. “It’s an underground symbolism for us – the feminist spirit of the company.”

The La Panthère collection is also a way to demonstrate to the industry that mosaics can be as illustrative as Erté’s paint or pencil. “Mosaics are a storytelling medium – if you want to tell a story, we can tell it,” she says. “We’re updating what Erté was doing but in our own style.”

The big idea here is to invoke Art Deco, but to be strong, graceful – and feminine – for the 21st century. 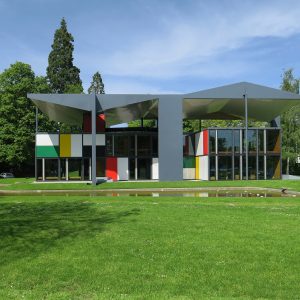 Photographer Paul Clemence has scored another thoroughbred assignment. This time, he was in Zurich to shoot the renovated...