In late 2021, I penned a feature article for Metropolis magazine’s online site about a wine tasting room out in the middle of a field of barley, just south of Walla Walla, Washington. Born during the pandemic, it was highly successful as a destination because it’s basically an open-air experience. These days, it’s booked well in advance, with a maximum of 20 groups visiting daily. It was designed by the Seattle-based architecture firm GO’C Studio, whose co-founders are Aimée O’Carroll and Jon Gentry. The tasting room’s success can be partially attributed to Gentry’s education at the N.C. State College of Design. Today, we’re pleased to re-run this feature on A+A:

In November 2017, Seattle corporate executives Joe and Ashley Woodworth were packing for a Malbec tasting in Mendoza, when Joe’s phone rang.

It was his boss’s boss, offering a career-changing choice: Move to Salem, Oregon, or take a severance package.

Joe took the severance. “He basically pushed me off the cliff,” the co-owner of Alton Wines in Walla Walla, Washington, says.

“Joe is usually the pragmatist and the cautious one, but this time he said: ‘I’m quitting my job,’” says his wife Ashley, Alton’s other co-owner. “And I said: ‘Oh man—we’re really doing this winery thing!”

For years, they’d been pursuing wines, vineyards, and winemakers as they plotted a move out of corporate life and into private enterprise. “We have a long history of curating things together with friends—like tailgating or trips— and we’ve been together for 17 years,” she says.

They became connoisseurs of fine wines and those who make them. They searched for grapes from small vineyards across the Pacific Northwest. And they planned to start out with a minimal tasting room and production facility in downtown Walla Walla.

Then Joe stumbled across a tiny piece of land on a farm south of town. “It’s a leftover cove in a barley field,” says architect Jon Gentry, co-founder of GO’C, the Seattle-based architecture firm. “The farmer couldn’t make a turning radius in it, and wanted something interesting to happen there.”

The Woodworths, who’d seen and loved GO’C’s design for Cor Cellars’ tasting room in Lyle, Washington, acquired the cove— and promptly contacted Gentry. With his partner Aimée O’Carroll, all four visited the site, then slipped into a restaurant for a glass of wine— and a few sketches. “They were about setting up the view and the promenade—to see the barley fields and epic landscape beyond – and bring the landscape closer through the framing,” Gentry says.

The parcel was tucked away completely out of site. “That gave us a chance for a sense of journey and discovery because it’s so private,” Gentry says. “The building is revealed to you as you approach the cove.”

That approach surprises visitors constantly, starting with their first view from the parking lot. They stroll south through a 70-foot steel arbor to an open vestibule, with indoor tasting room to the west and outdoor tasting room to the east. Beyond is a sweeping view of planted fields and the Blue Mountains. “It’s a continuous ‘Wow— this is cool!’” Joe says.

The open-air design was a hit when it debuted mid-pandemic in July 2020. It’s now booked in advance, with a maximum of 20 groups daily. “We wanted to make it feel like a house, rather than a tasting room with a bar,” Ashley says. “It’s small enough that it feels cozy and doesn’t have a corporate feel.”

That’s a vibe this couple won’t likely experience ever again. 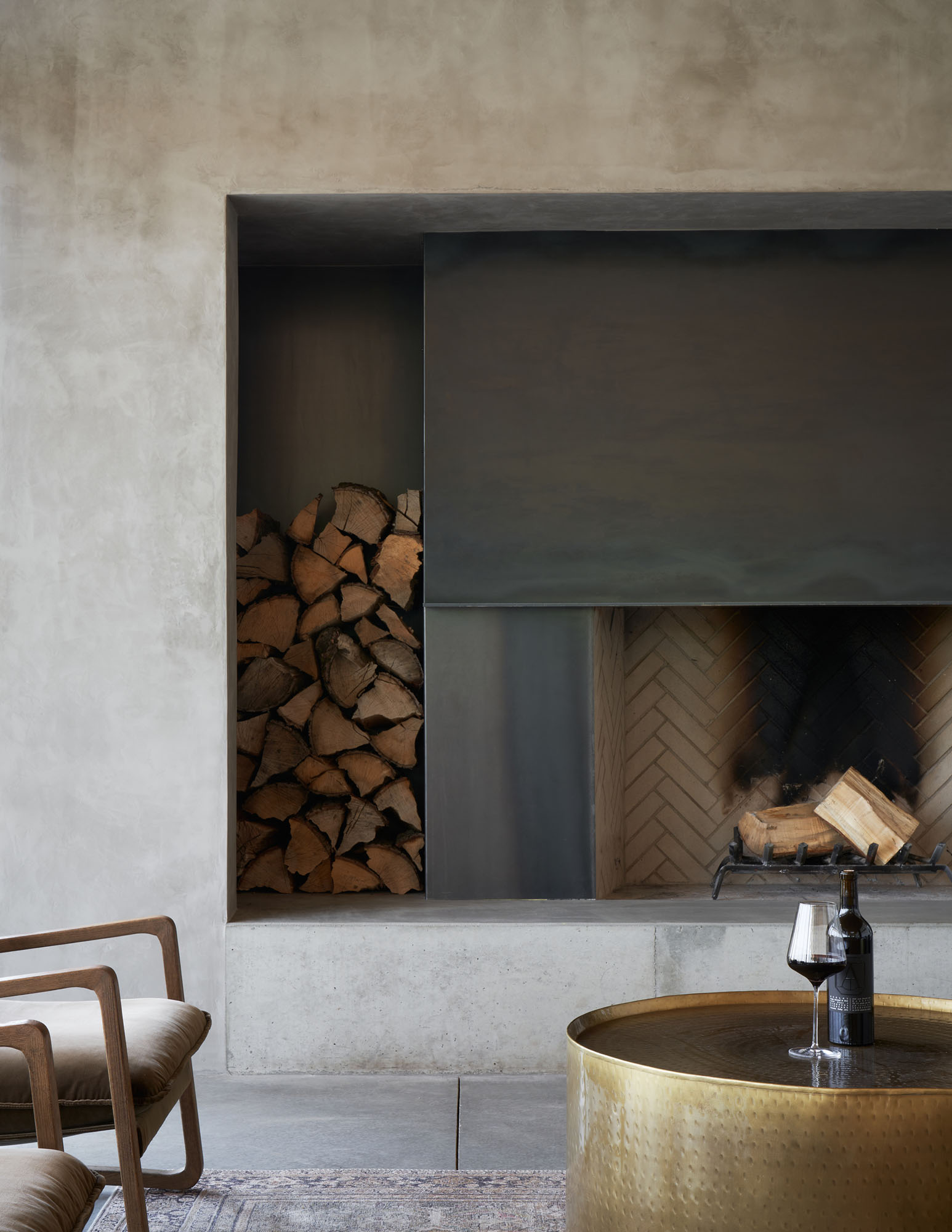 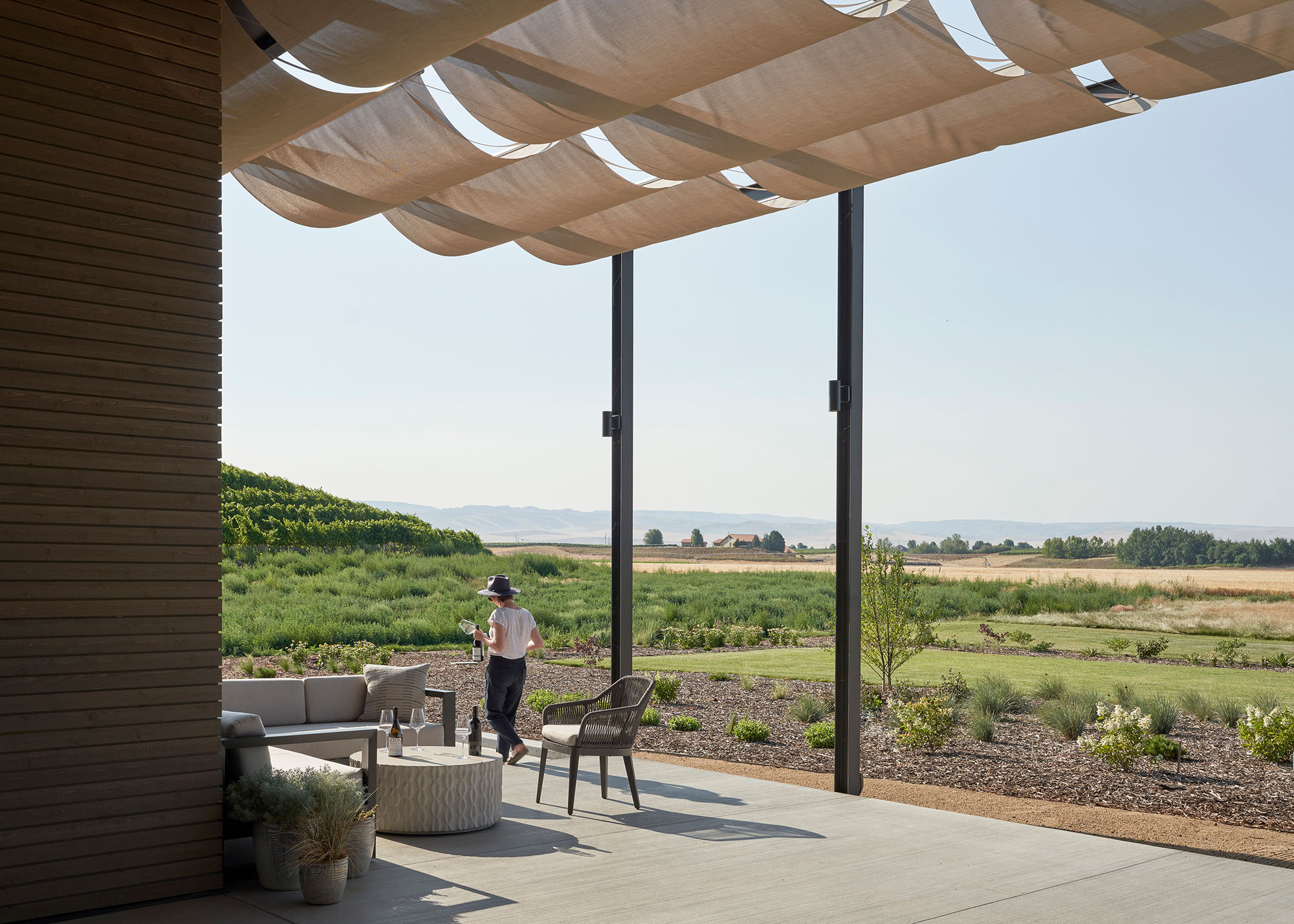 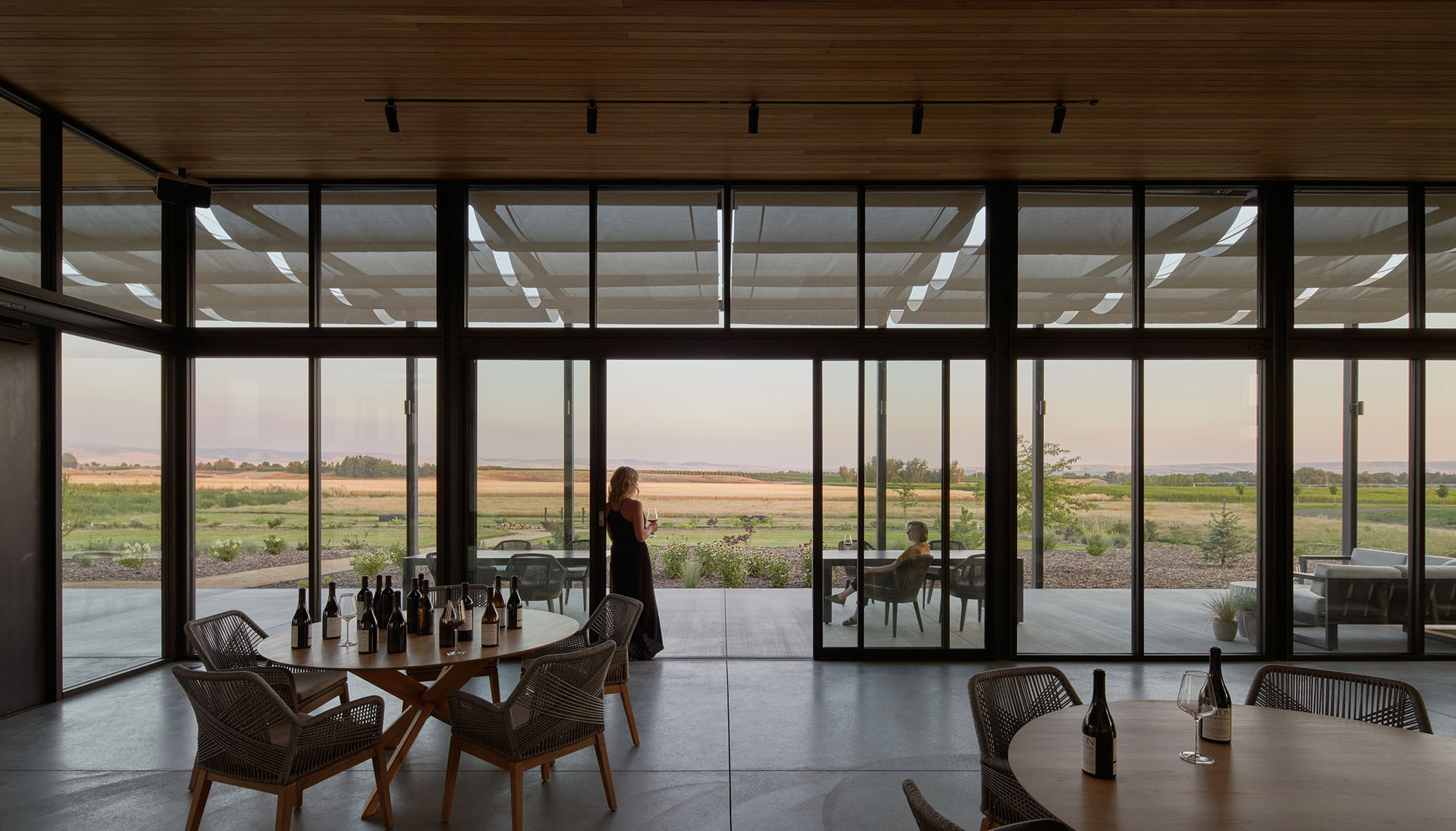 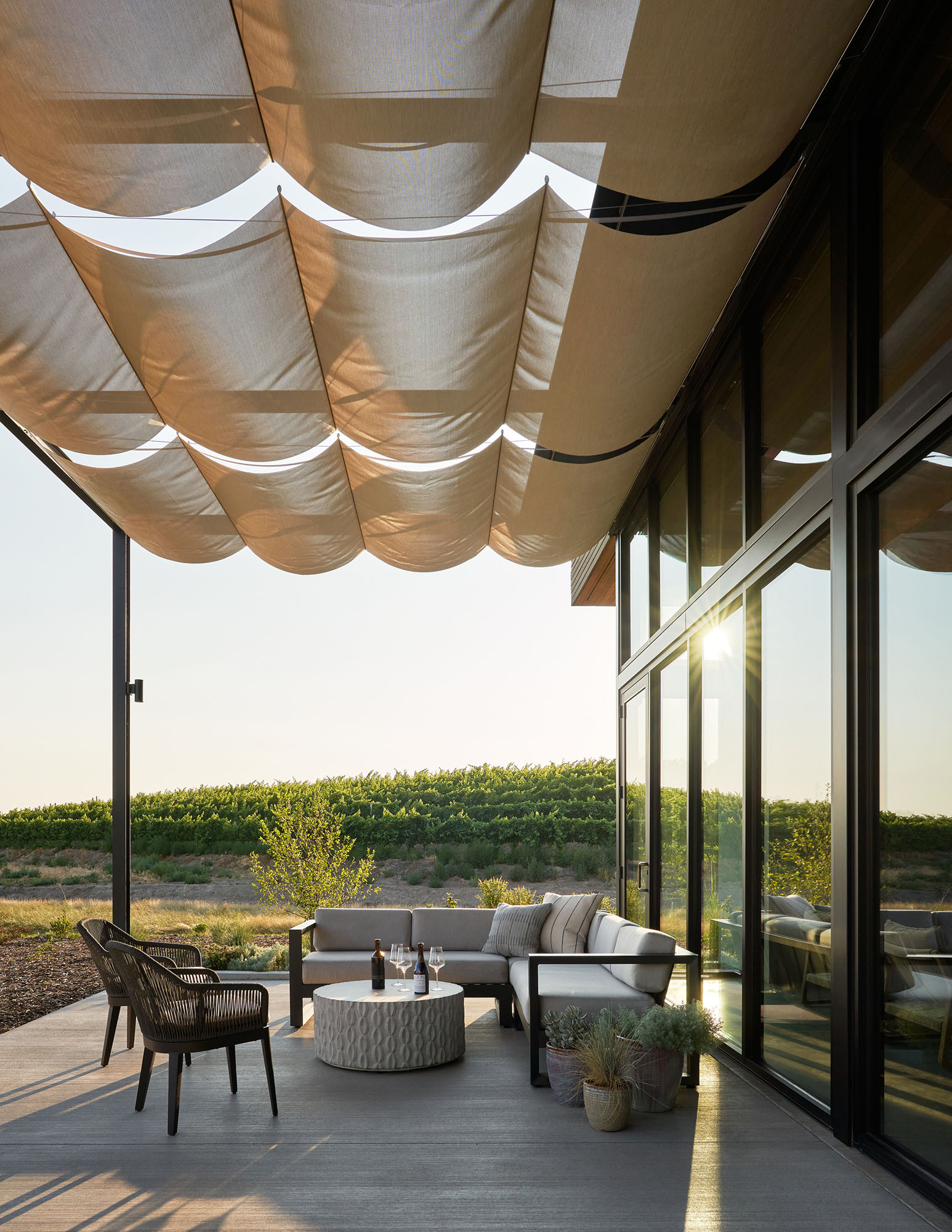 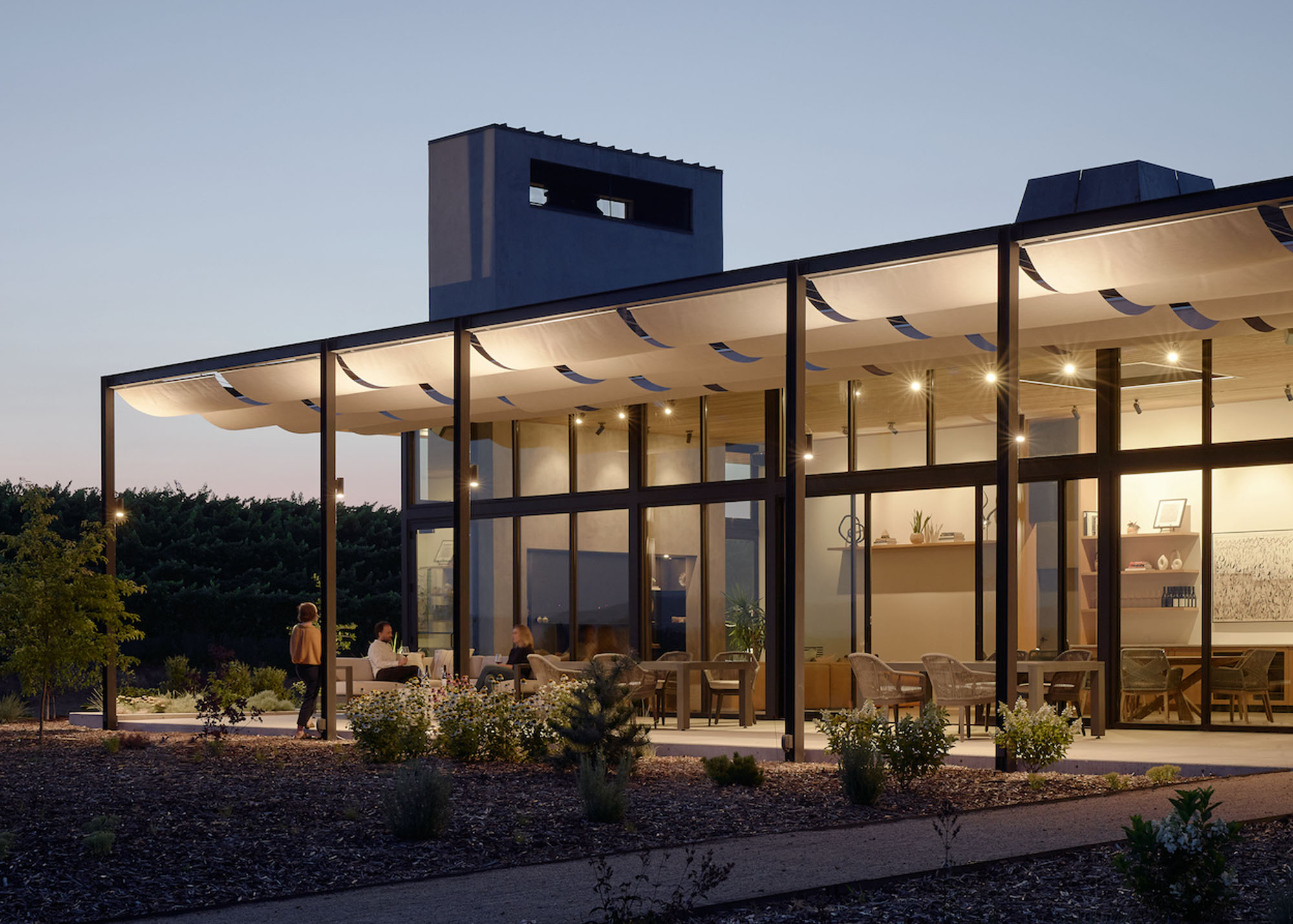 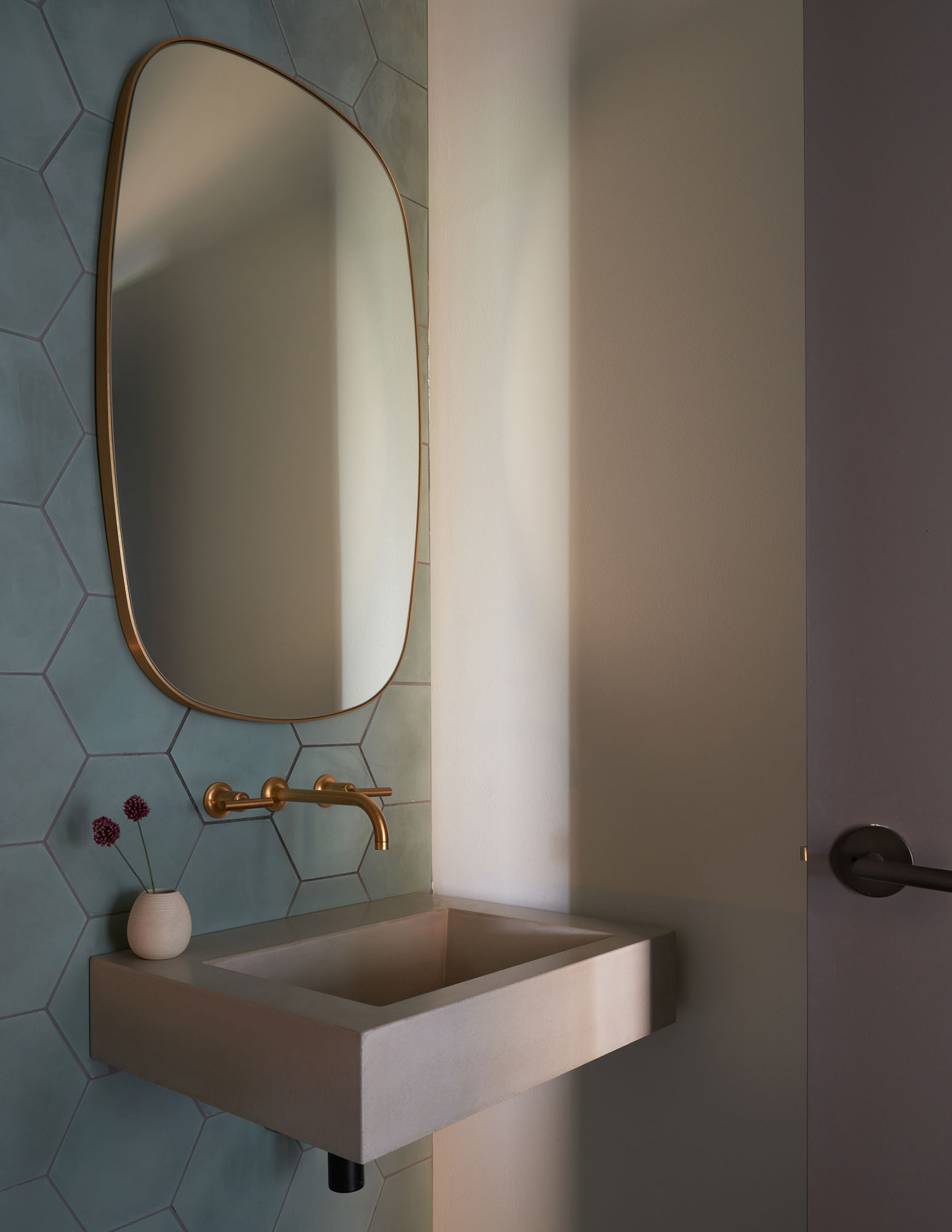 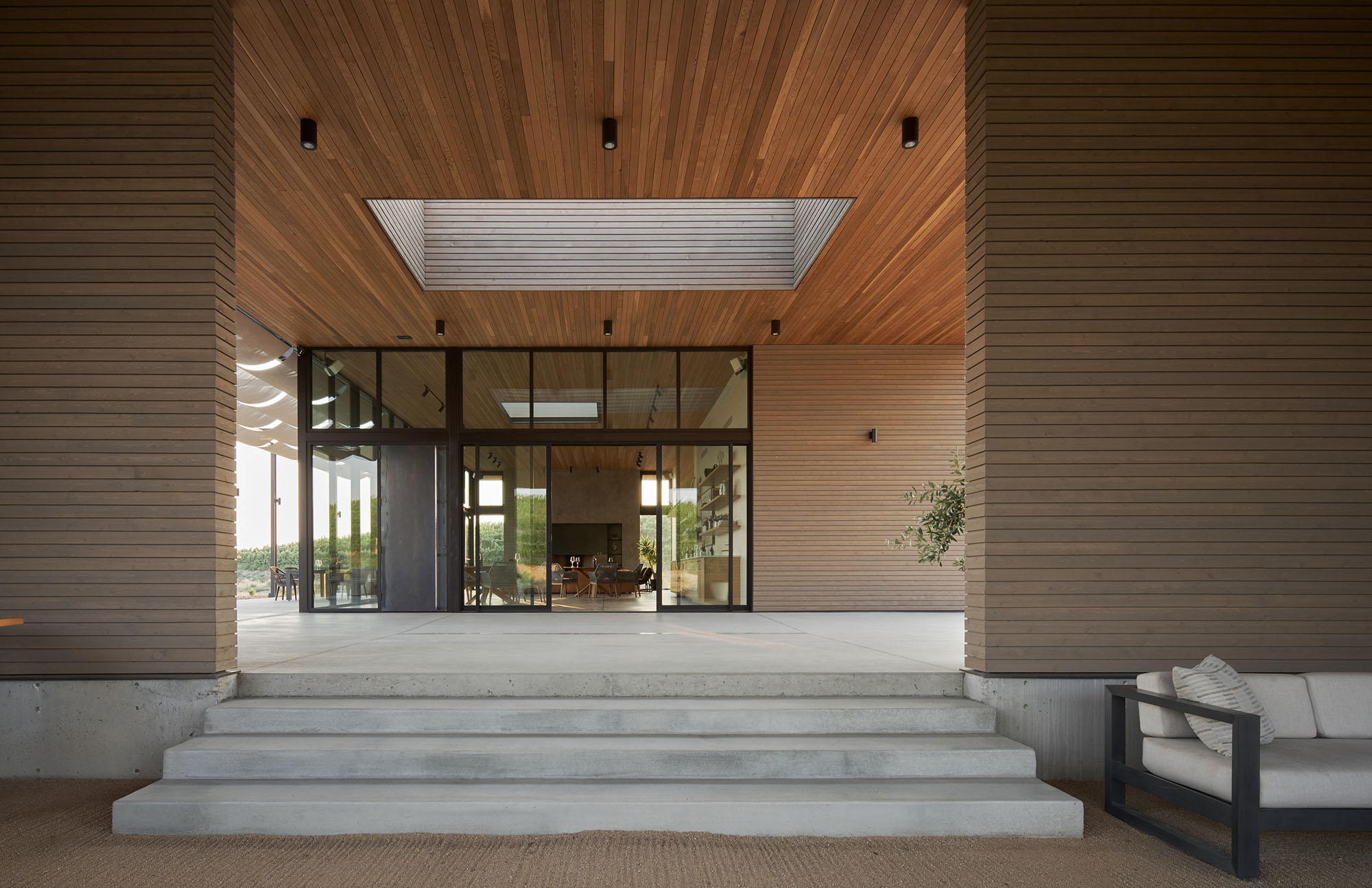 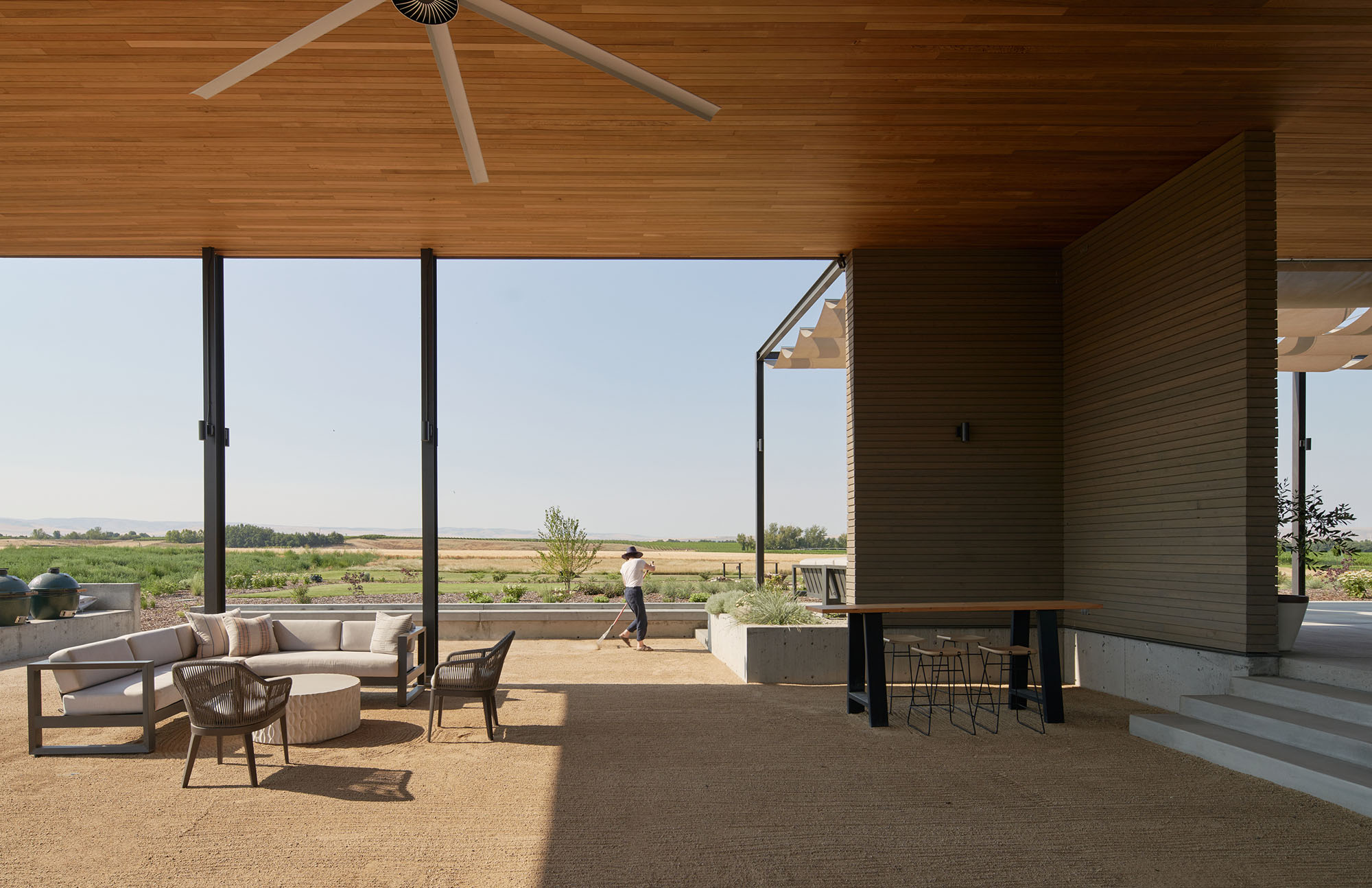 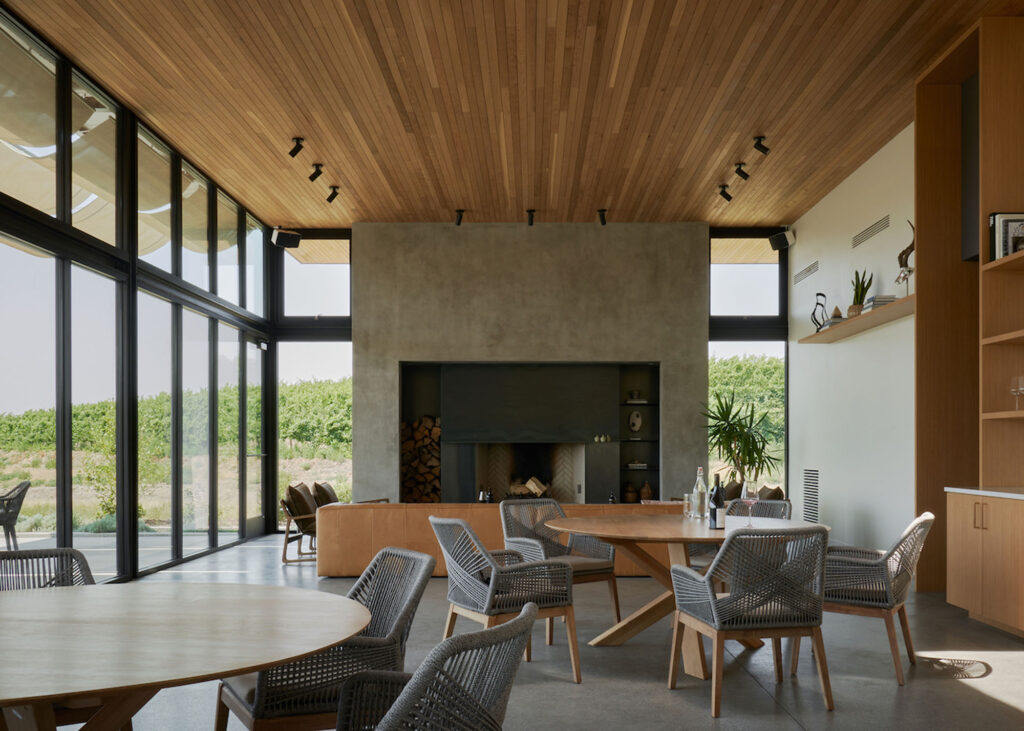 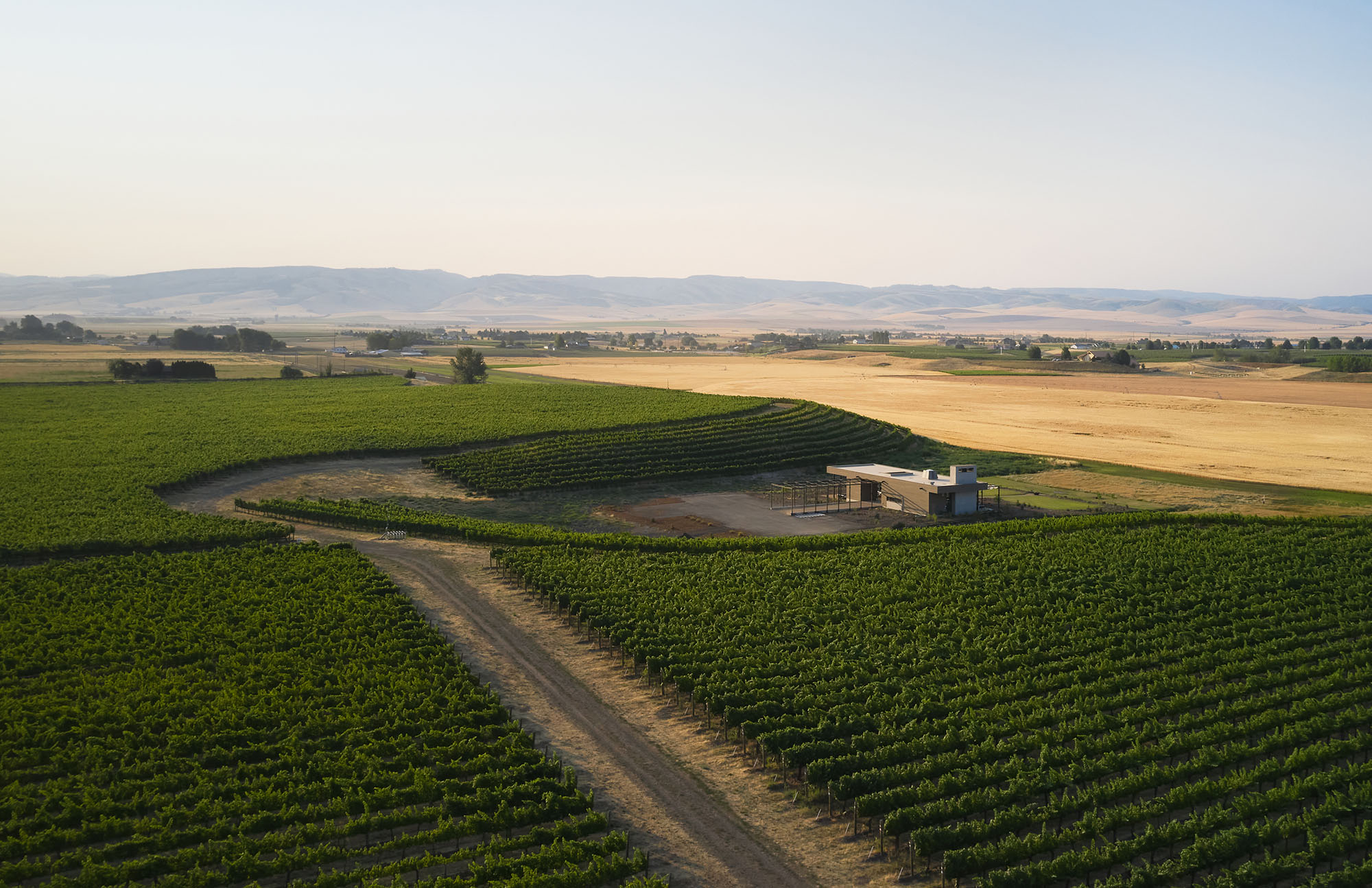 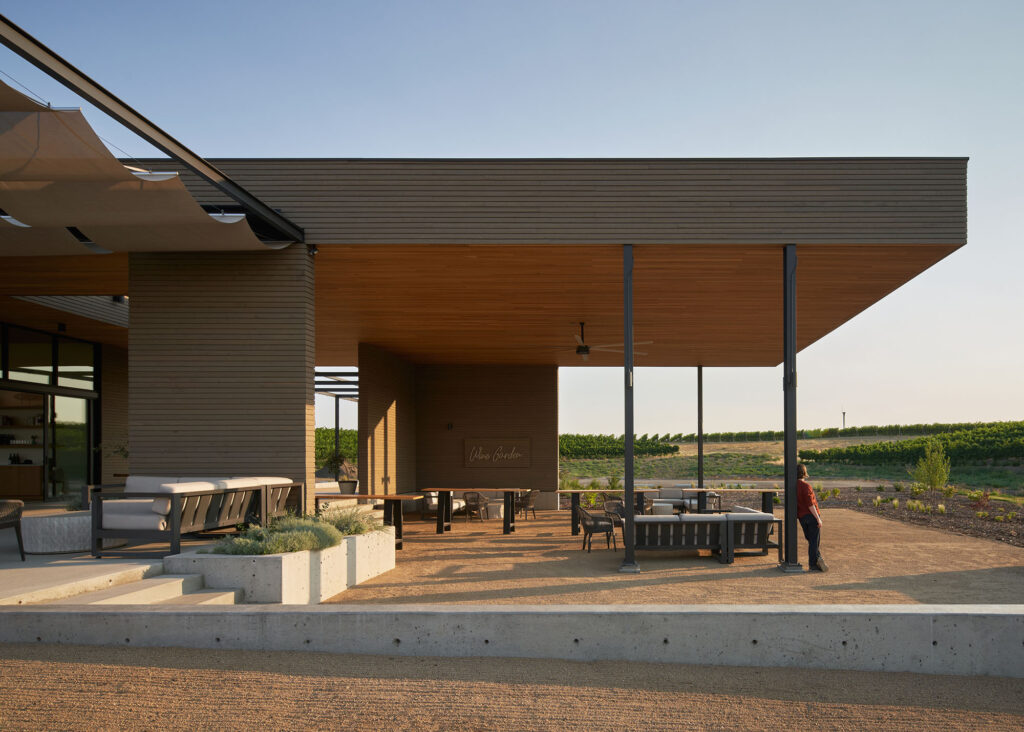 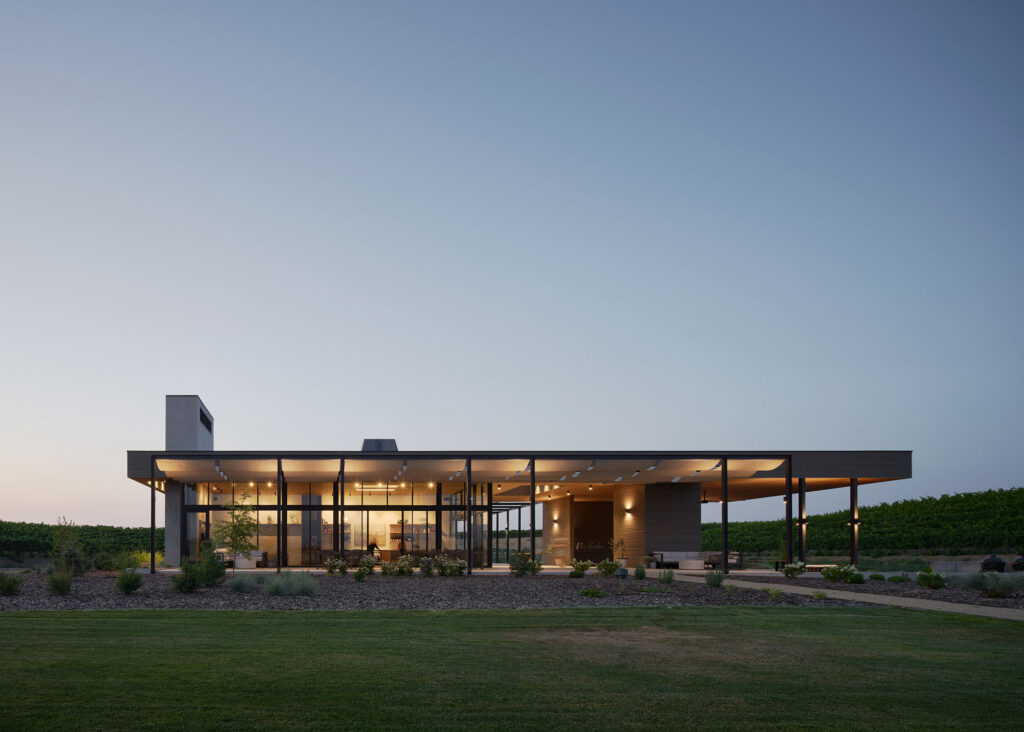 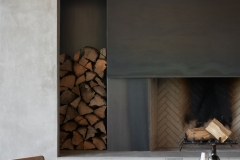 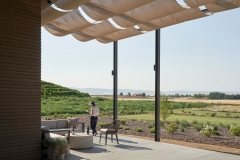 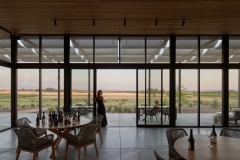 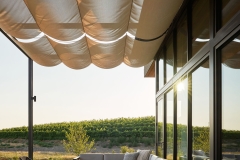 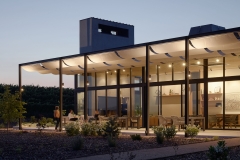 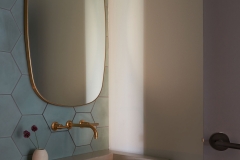 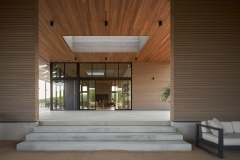 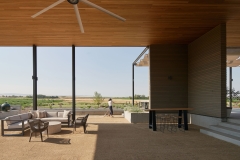 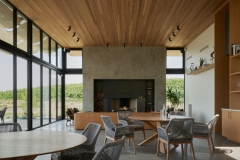 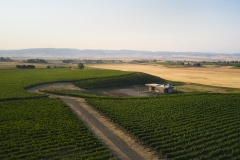 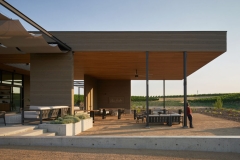 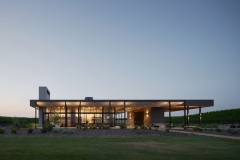 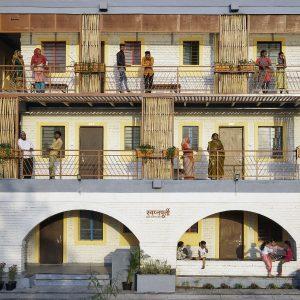 Sandhya Naidu Janardhan is an architect and managing director of Community Design Agency, an initiative of Curry Stone Design...