After more than 30 years of bending, twisting, and tying willow saplings and twigs into monumental objects in the environment, sculptor Patrick Dougherty is calling it a career.

Time, it seems, has caught up with the prolific artist. “It’s kind of like equipment failure – your body gives out, and your elbow doesn’t work the same,” he says. “Things seem to be lagging, while you have to promise projects two years out.”

Twenty-five of his 333 works are still standing tall in their environments, though each is temporary by nature. “Some have been up five or six years now, because in colder weather, they stay up longer,” he says. “In the South, they’re around for a couple of years, but in the West they last a long time.”

His work is fleeting, with a lifespan that’s similar to that of a flowerbed that revels in its own day. “It’s intriguing to let them take on a natural lifecycle,” he says. “And there’s a more central viewing with people who are heartfelt, sad, and find them a little endearing.”

It’s the evoking of human emotions that inspires this artist. “They’re viewing art in a way I think is important – it’s a crucial experience to have real feelings about,” he says. “You go into them and they solicit a wide range of experiences – like a bird’s nest or a childhood experience.”

Two of his works are semi-permanent and indoors. One covers a café wall at the North Carolina Museum of Art in Raleigh. Another is at the Gibbs Museum in Charleston, S.C.

His final sculpture is called “Fit for a King,” and it’s on a lawn of the Mount Botanic Gardens in West Palm Beach, Fla. It’s his second for this client, though the first was a little smaller, at about 12 feet low. This one’s larger – a castle with a spire that can be sees from all over the gardens, up in the treetops. “It’s barrel shaped, with a large interior and many entryways to go in and go in further,” he says. “There are windows and a large oculus in the ceiling – it’s a big, nice piece.”

He likes to be provocative, to make people come running to see what he and his son are building – and see the big pile of sticks they work from. Beyond that, he’s interested in conjuring up great feelings for his stickworks that make bold architectural statements. “With ‘Fit for a King,’ people feel a little lost in it, because it’s a large volume of space inside, but one that’s pleasant,” he says.

The client provided him with a prominent lawn within a garden that’s well managed, so this sculpture stands out by itself. It’s 22 feet tall, with a footprint that’s 35 by 35 feet. Because there aren’t many flexible plants in Florida, Dougherty purchased a tractor-trailer load of willows from Quebec.

And it’s detailed, with the sense of stable grandeur he seeks. “You can look into it and out of it if you’re inside, for classic views of the garden itself,” he says.

But it won’t last forever, so if a trip to West Palm is on your 2023 wintertime schedule, stop by for a visit – inside and out.

It may be your last chance to experience work by one of the great sculptors of our time. 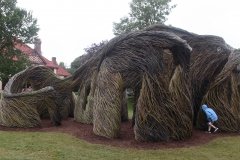 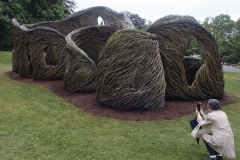 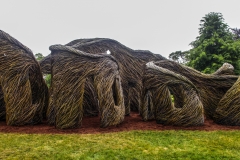 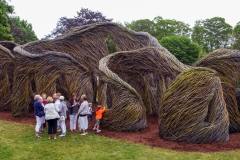 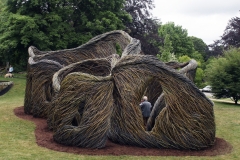 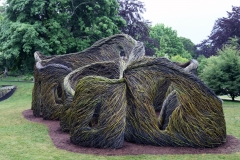 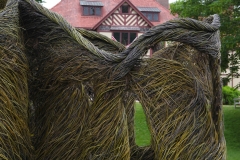 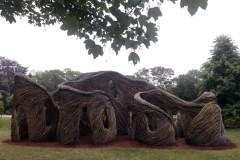 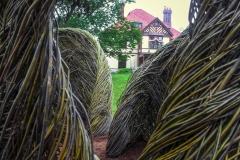 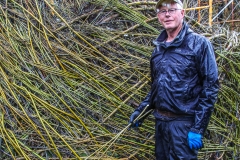 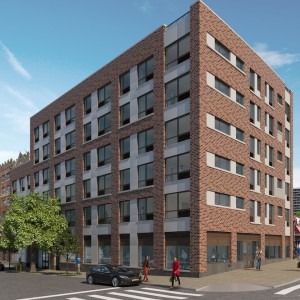