Back in July, Metropolis magazine published an online feature I wrote on the reimagination of Austin’s Pease Park, which first opened in 1875. More recently, Ten Eyck Landscape Architects collaborated with the Pease Park Conservancy, Clayton Korte, and Mell Lawrence Architects to renew a seven-acre section of the park called Kingsbury Commons. The feature’s re-posted here today:

A collaborative push to reimagine the southern gateway to Austin’s oldest park has bred an experiential blend of landscape and architecture.

Each firm tackled a distinct part of the seven-acre site called Kingsbury Commons in the first phase of a master plan developed in 2014 by Philadelphia’s WRT Design. Funding came from a $10 million endowment to the conservancy from the Galveston-based Moody Foundation.

“The conservancy is a nonprofit whose express purpose is to make this park better,” says Nathan Quiring, partner at Clayton Korte. “It remains city-owned land, but the conservancy not only paid for design services and construction, but is now running operations like maintenance.”

Donated to the city by Texas Governor Elisha M. Pease in 1875, Pease Park covers a total of 84 acres running along Shoals Creek. It’s chock-full of dramatic geology because it lies on the Balcones fault line—an ancient escarpment of cliffs and caves that runs south from Dallas, through Austin, then southwest to Del Rio.

“This is one of our most prized and coveted community assets, and we didn’t want to overdevelop it or use artificial material,” says Heath Riddles-Sanchez, CEO of the conservancy. “We wanted to create something that flowed out of the existing organic character.”

Ten Eyck added new infrastructure under an existing forest canopy—playground areas made of wood, not plastic or steel, a green lawn for passive recreation, football, or soccer, plus a basketball court and an amphitheater. A sinuous, curving limestone wall weaves through all, tying it together.

“That ribbon wall curves around the existing trees, so there’s really interesting shade,” says Stephanie Saulmon, senior associate at Ten Eyck. “On the day it opened, it felt like it had always been there because of the mature trees.”

Ten Eyck also intervened ecologically. Where water once flowed down the middle of a street—a source of pollutants like oil and garbage – the firm added an inlet, piped the water below grade, then restored a stream bed and added native plants. “Now the root system is filtering and cleaning the water before it’s returned to the creek,” she says.

The task of restoring the 500-square-foot Tudor Cottage, built for restrooms in 1928 and more recently used for storage, fell to Clayton Korte. They pulled down a flat ceiling, added a vaulted one, then used salvaged wood as wainscoting for interior walls. To connect it to the park, they added a 2,600-square foot event terrace. “The view is from the top of the hill,” Quiring says. “The hill’s only 20 feet tall, but you can look down on the playground and watch kids play.”

Clayton Korte also designed new restrooms and storage space (“We get all the glamorous work,” Quiring quips. Inserted into a wooded hillside, they defer to the park. “The restrooms are a dogtrot—the men’s room is on one side, and the women’s is on the other,” he says. “The breezeway has a handwashing sink, with a flat roof above.”

But the most ambitious and popular design came from Mell Lawrence, founder of the Austin-based firm bearing his name. It’s a two-story, round treehouse and observation pod called the Treescape. After walking up a winding trail, visitors find themselves hovering 15 feet above ground. In the morning, it’s used by children at the ground level. Closer to sunset and through the night, it’s populated above by an older crowd.

“It’s a tree-lined den up in the trees,” Lawrence says. “When you occupy the space, you’re one with the entirety of the outside and the canopy of the trees.”

That makes it the crown jewel in a masterful mix of buildings in a landscaped environment. 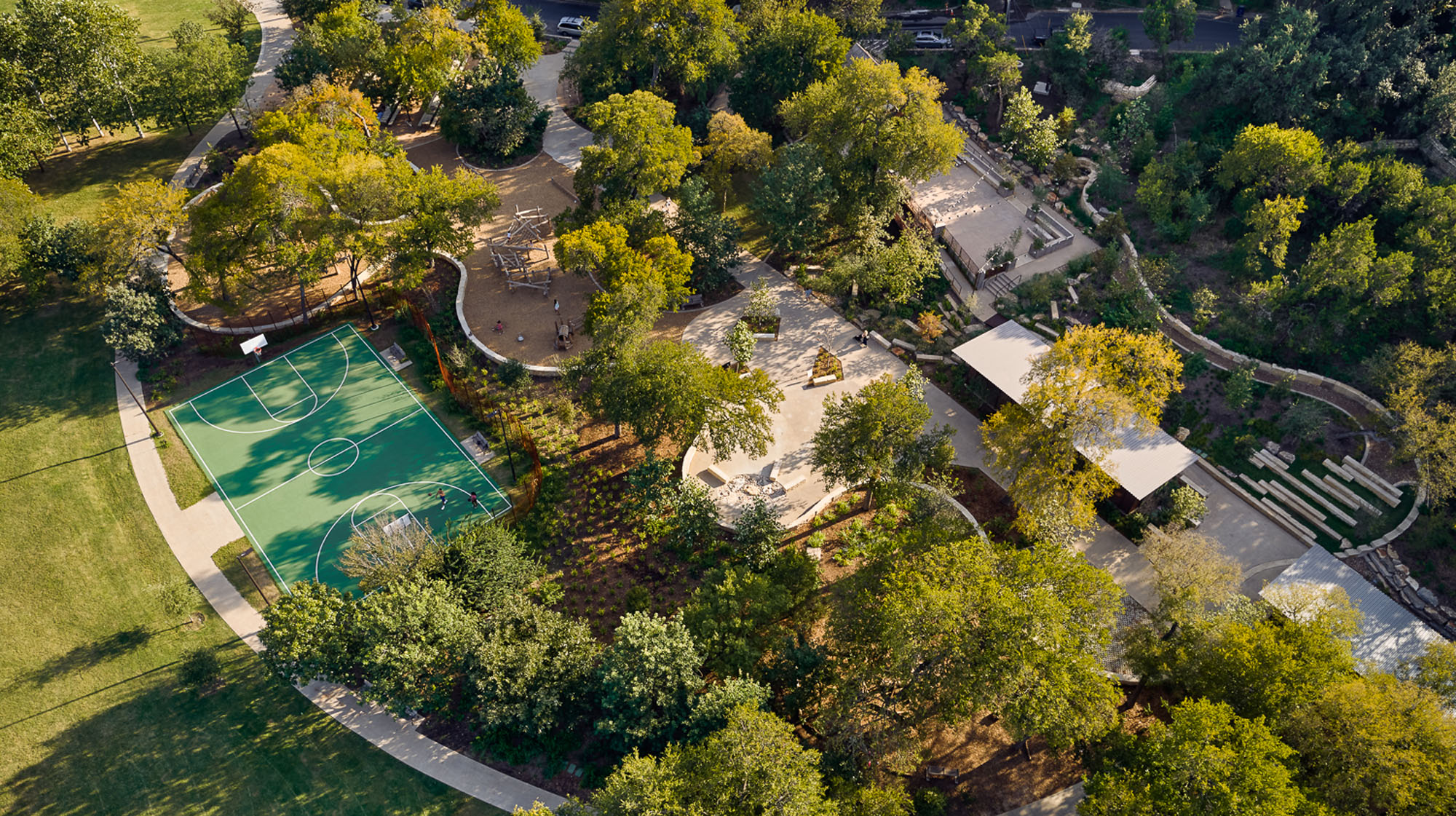 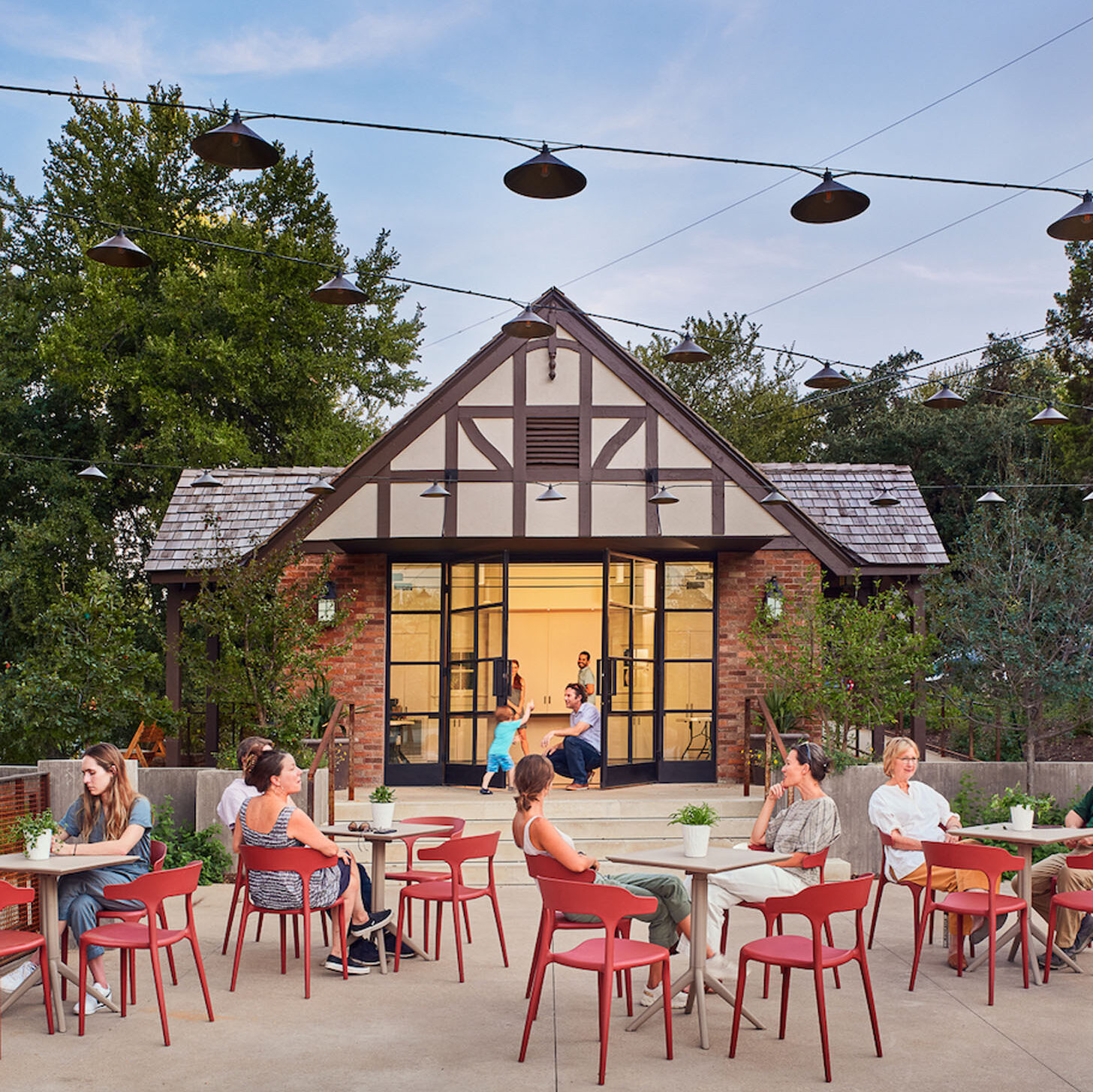 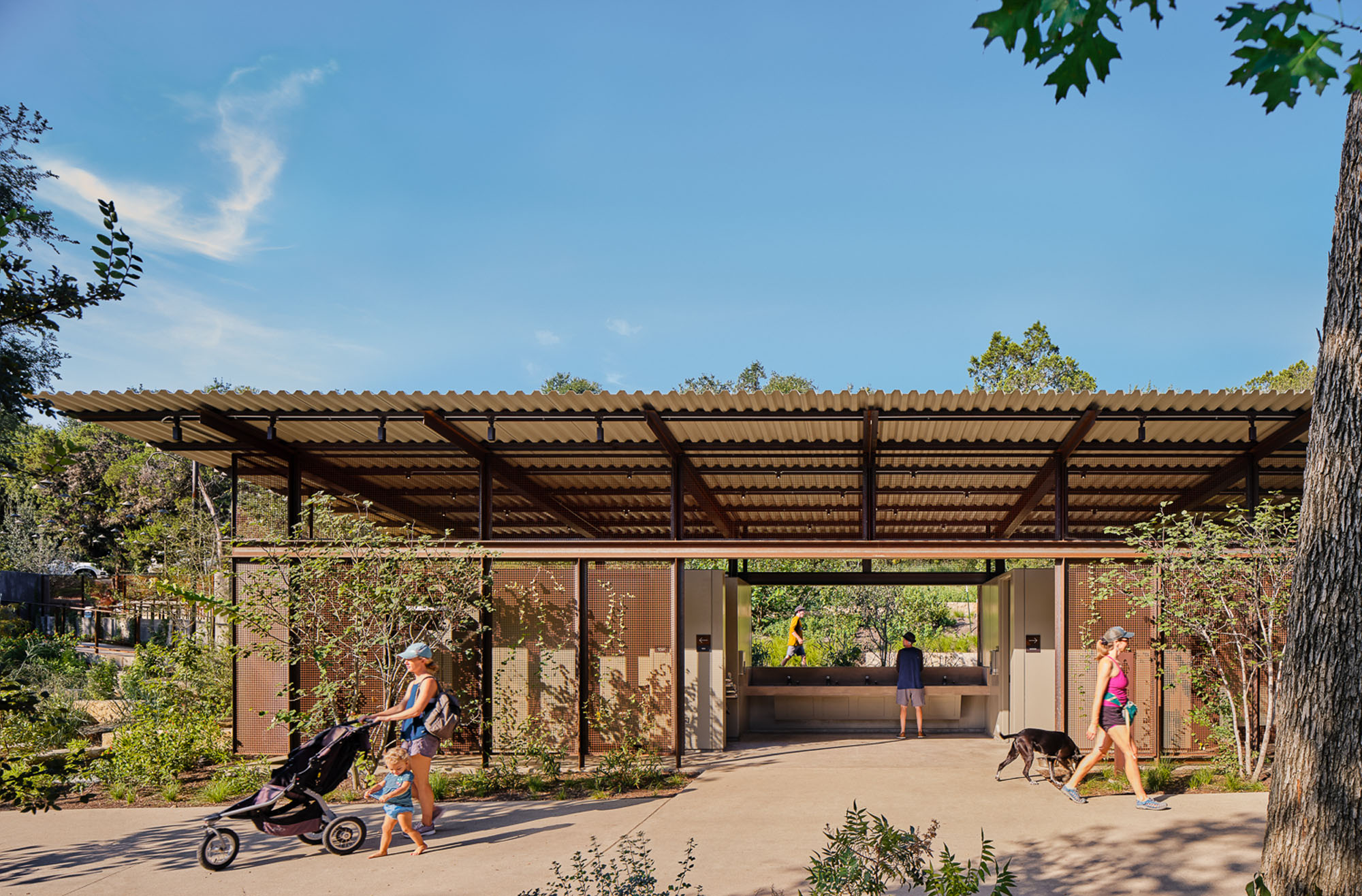 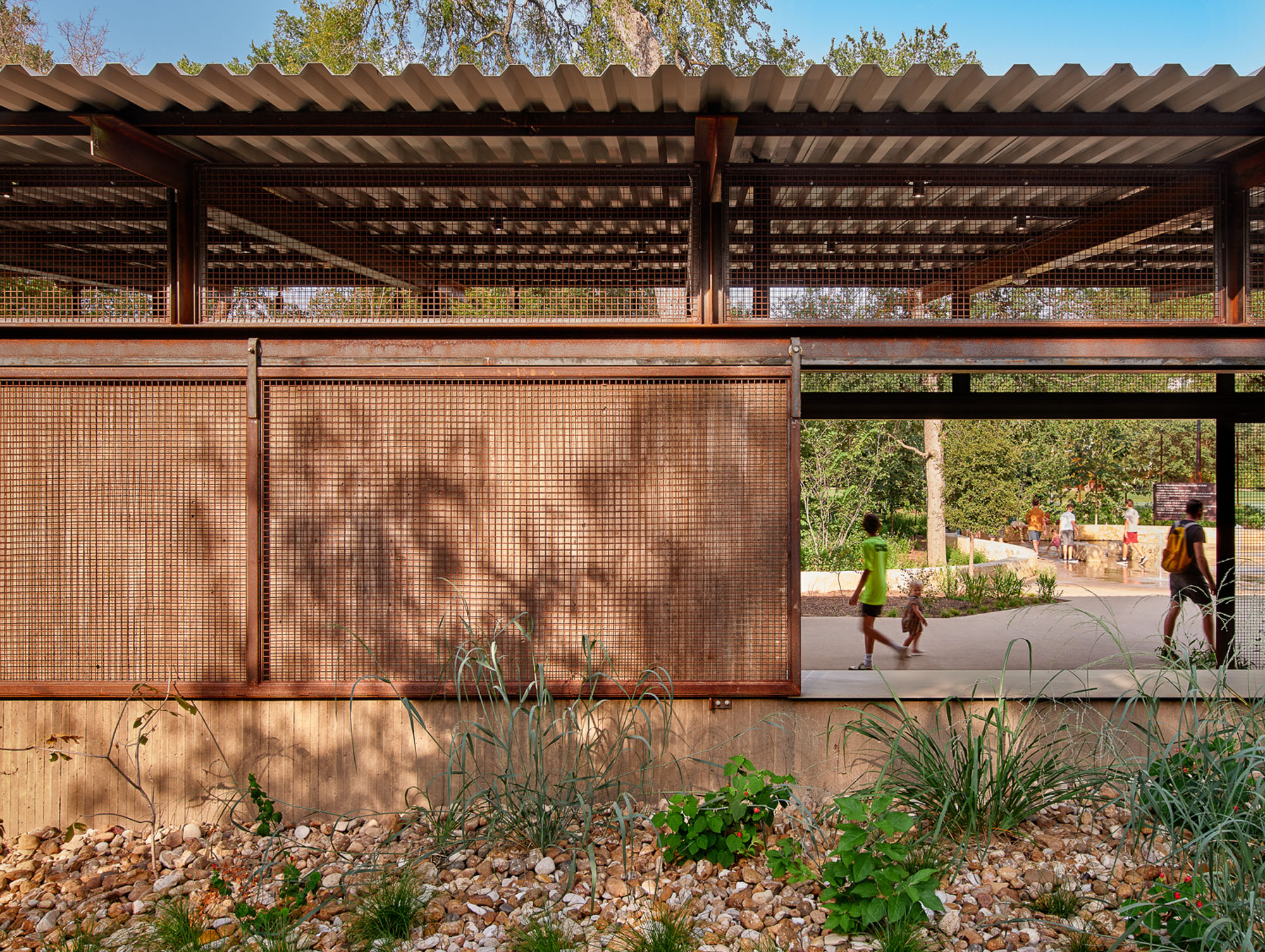 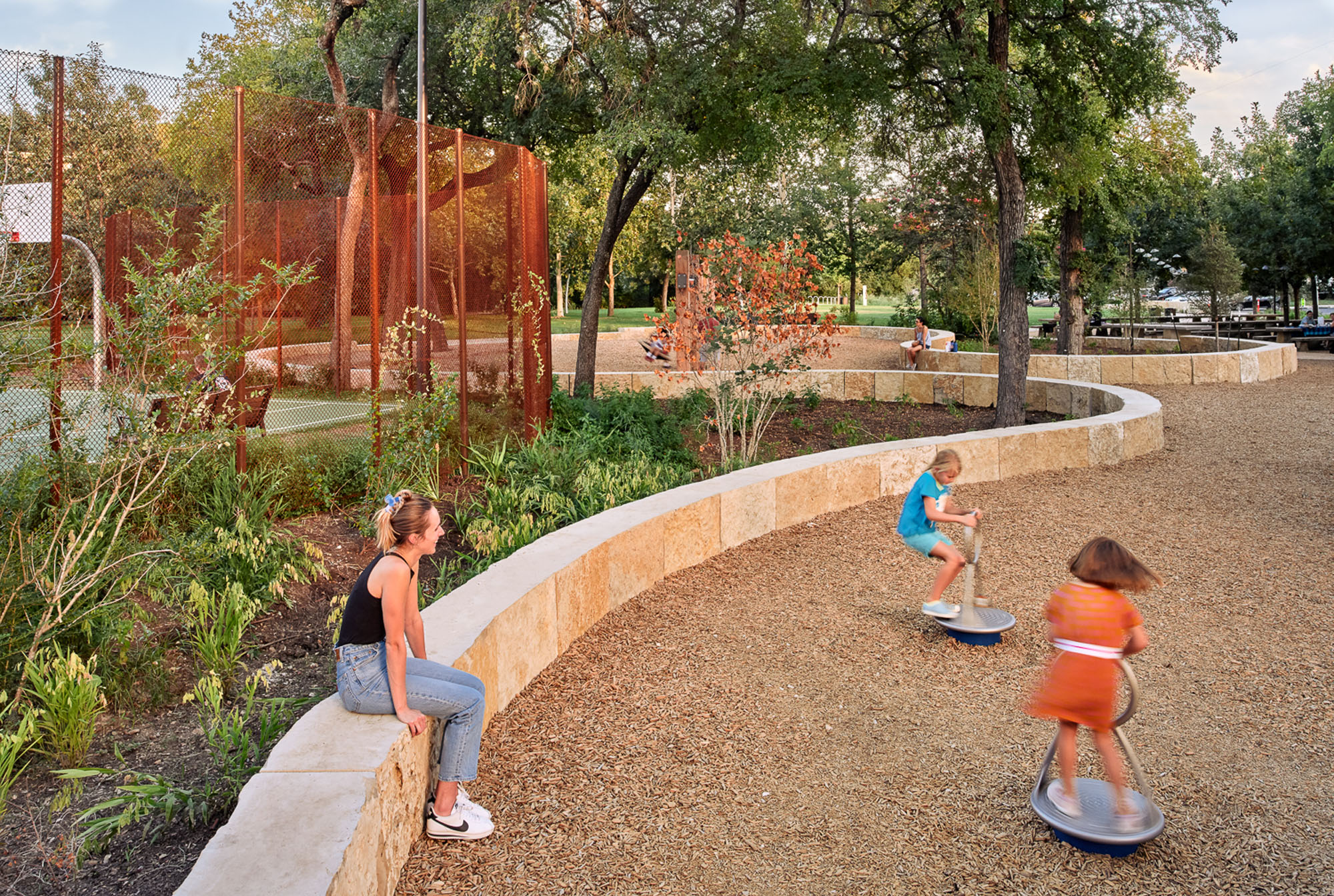 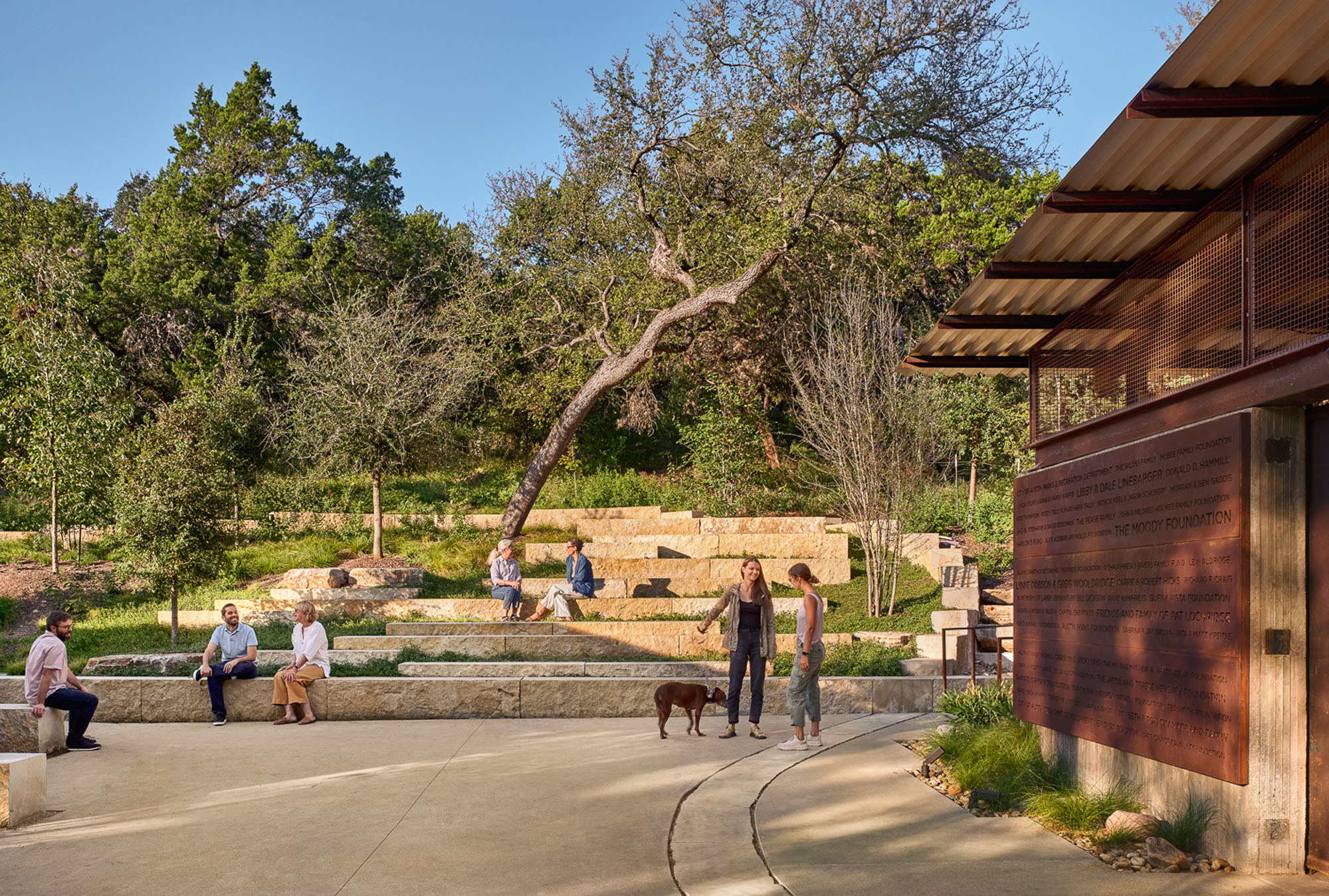 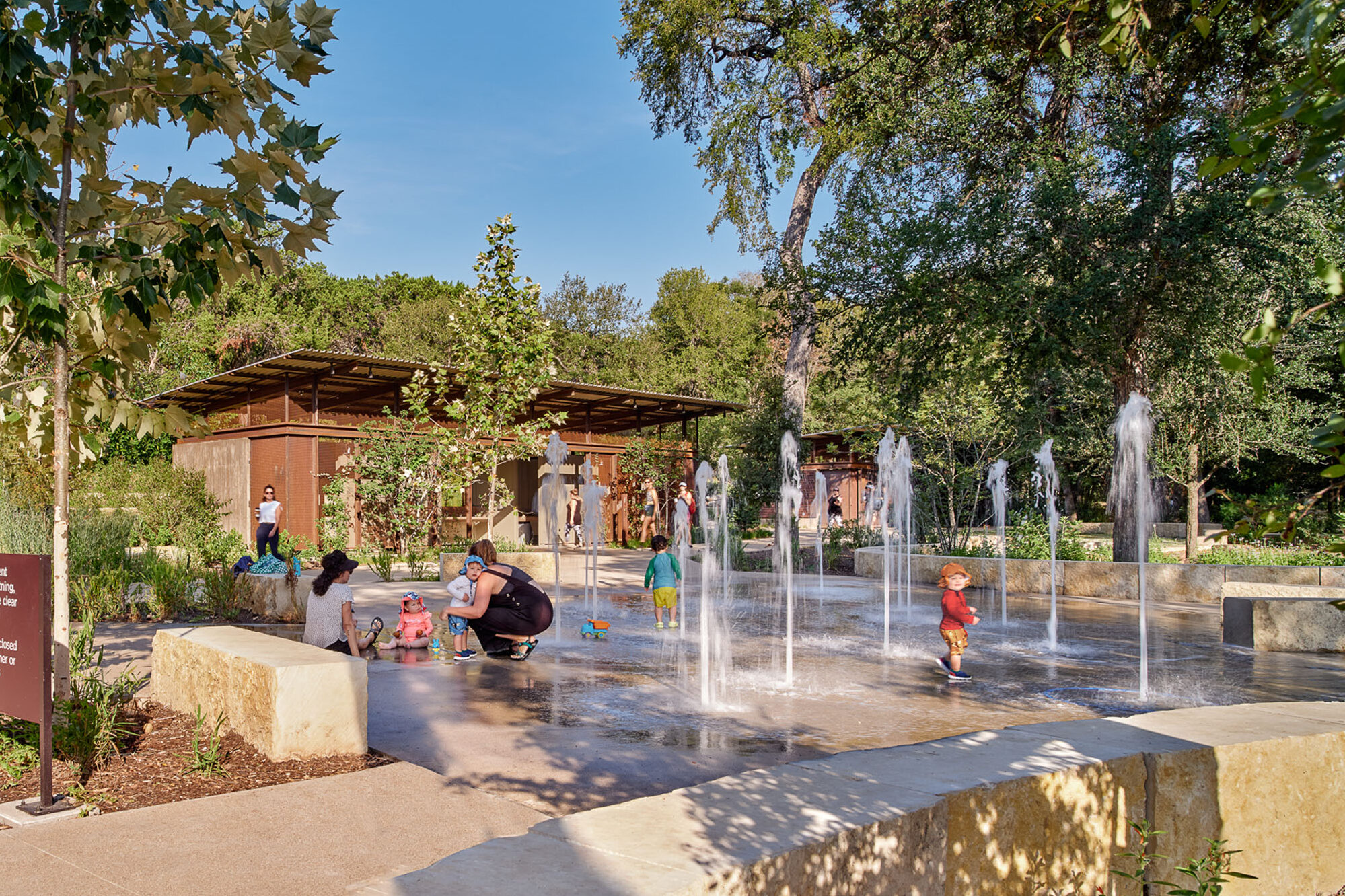 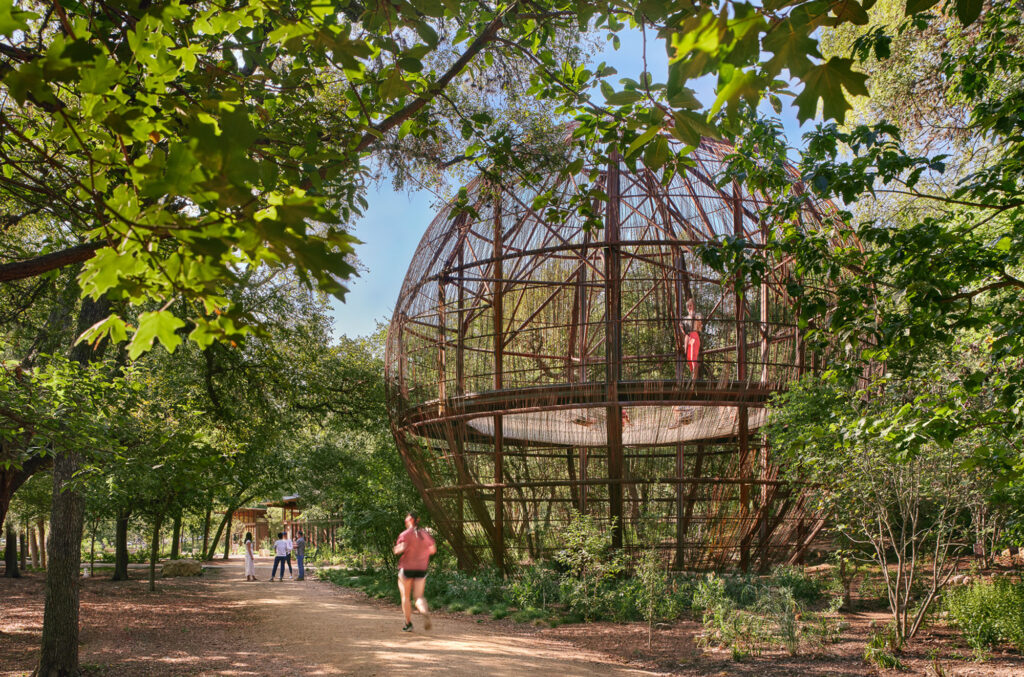 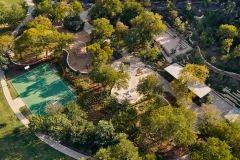 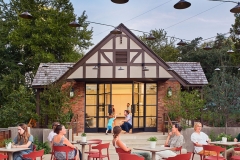 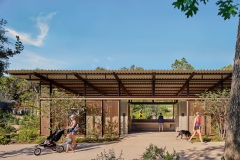 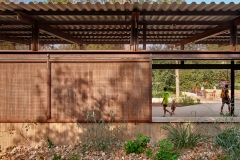 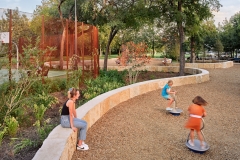 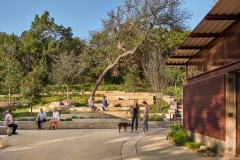 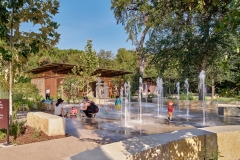 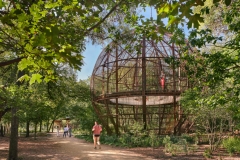 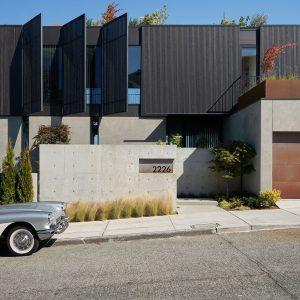 Never ones to shrink from a challenge, Jon Gentry and Aimée O’Carroll of Seattle’s GO'C Studio took on Brandon &...