The National Building Museum’s 2023 Architecture and Design Film Festival is taking a long, hard look at how communities can be created – and also demolished.

It examines the role of architects, planners, and designers in doing both. “The overarching theme is about architecture and design and how it affects world around us,” says Jacquelyn Sawyer, vice president  of education and engagement at the Washington, D.C. museum. “It asks the question: ‘What are the lives that are living with design?’”

The festival’s slated to run from Thursday evening, Jan. 26 through Sunday night, Jan. 29, with each night’s films focusing on its own insightful theme. “The opening night is about the power of community and art, Friday’s is gentrification and redlining, Saturday’s is about sustainability, fashion and design, and Sunday’s is about Washington D.C.’s culture and community,” she says.

Thursday opens with “Alice Street,” a film that examines the power of public art to bring communities together. Set in Oakland, Calif., it centers around two communities, one Black and one Pan-Asian. It focuses on two muralists – one for each community. When their works were threatened by gentrification, their communities came together to advocate not just for their own, but for the other too.

“It’s about how community and culture and collaboration play out on the stage of the built environment,” she says. “We’ll be welcoming the filmmaker, Spencer Wilkinson and one of the community activists, Lailan Sandra Huen, to tell their stories first-hand.”

Friday’s second film, “Committee of Six” is a documentary featuring actors reading notes from the six men who set federal housing policy in 1955. It brings a modern voice to the ramifications of redlining, a policy created so that some neighborhoods would thrive and others would not. It also looks at the generational wealth lost from housing that forms the foundation for it.

“It’s an enactment of archival meeting minutes from University of Chicago officials and community leaders,” she says. “It’s about how they were going to create an urban renewal plan for Hyde Park on the South Side, and wipe out minority communities.”

Now in its fifth year, the weekend film festival attracts anywhere from 3,500 to 4,000 people, all keenly interested in architecture, design, and film. It’s an adult affair, with wine and beer tastings and catered food from local restaurants.

“It’s for anyone interested in stories communities tell us through and in the built environment,” she says. “It’s about how people create community.” 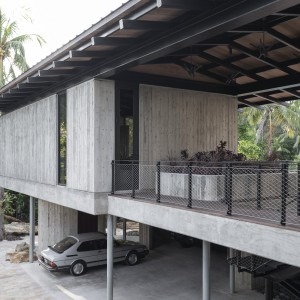 The current issue of Ocean Home magazine features an article I wrote about a new home in Coconut Grove, Fla. Designed by Jacob...