Fed up with the public nature of life in suburban North Carolina., a couple approached architect Arielle Schechter with a desire for privacy.

“They lived in a soul-deadening development in Chapel Hill and they were climbing the walls for lack of freedom and privacy from their neighbors,” she says. “People were walking by and telling them what to do with their yard.”

So they bought a wooded lot in Pittsboro to escape.

Schechter gave them a 2,053-square-foot home with two bedrooms, a small study that could be a third, and two baths. It’s opaque on the front and transparent toward the rear.

“There’s a veil of cypress to shield them,” she says. “On the south side, it breaks free with a big porch – and there are little bursts of freedom.”

The cypress screen on the north elevation is composed of two-by-twos. The architect used Hardie panels for siding, and a roof with a white synthetic membrane and a solar array.

The solar orientation drove the design of the home on its one-acre lot. “I knew I wanted a lot of passive solar and a house that was south-facing,” she says. “Then there was the entry on the east, and I could screen that.”

Her efforts have paid off, in spades. “It’s net zero, but they have to get through one year to see how they balance out between winter and summer,” she says. “They buy some energy in the winter and sell some in the summer.”

She also gave them space to connect with nature. “I wanted a place for them to sit outside and watch the rain,” she says. “That’s the reason for the cantilevered roof – to watch the rain, unencumbered.”

With the solar panels and heated floors, the new home came in at about $300 per square foot.

But it’s busybody-free, and worth every penny.

[…] a new home on the Haw River in North Carolina’s Chatham County, architect Arielle Schechter found her inspiration in two […] 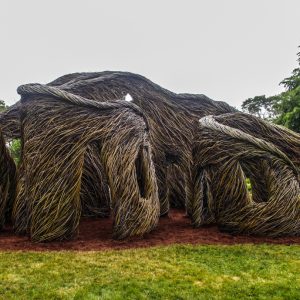