For a new home on the Haw River in North Carolina’s Chatham County, architect Arielle Schechter found her inspiration in two places.

One was the river. The other was a rock.

She placed the home on the only buildable knoll, since the 21-acre site slopes steeply down to a flood plain and riparian buffer below.

As for the rock, it actually was a huge granite boulder, split down the center. “It’s super-sculptural with a thin knife-blade through the middle where rainwater flows,” she says. “The idea of bisecting something appealed to me, so I did that with the butterfly roof.”

Then there was the raptor.

When she first saw the boulder, she was sketching the river, its banks and other forms – as a hawk landed 10 feet away. Some might call that serendipity, while others view hawks as symbols – of intuition and higher vision for completing tasks or making decisions. A hawk, they contend, means the universe wants someone to learn some powerful lessons – and expand his or her knowledge and wisdom.

In Schechter’s case, it was a matter of designing a very green home for a retired attorney and his wife, an artist and gallery owner. She calls it the most sustainable home she’s ever designed.

Three vertical geothermal wells drop 300 feet. Triple glazed windows use screens to diminish heat gain from a west-setting sun – by 84 percent.
There’s a 21.5 kilowatt rooftop solar array, with the clients monitoring its output. “We’re way past net zero,” she says. “The sun is beating down on that roof, so we thought we might as well take advantage.”

Her butterfly roof channels rainwater into a pair of 5,000-gallon cisterns, placed on each end. The water’s now used for toilets and washing machines – but with a triple filtration system, it may find a higher calling soon. “It’s ready to be switched over to be potable as soon as the county says ‘Go,’” she says.

On a lighter note, she worked hard to accommodate the couple’s four dogs, plus six or seven more that arrive daily for daycare. “They’re inside and outside,” she says. “There’s a special dog-washing room because they go into the river, and have to be hosed down.”

Today, every room in the house looks down to that river. 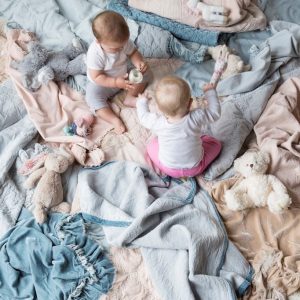 Some luxury brands burn or trash seconds and samples, but Bella Notte’s found new use for theirs. It’s a collection...