Eleven years in the making, Voith & Mactavish Architects’ renovation of a townhouse on Philadelphia’s Rittenhouse Square is eclectic, erudite and a work of passion.

That’s due mainly to the sophisticated interests of the architects’ clients, running the gamut from music, flowers, cooking, interiors and art.

“For this house, the design inspiration was them,” says Daniela Voith, founding partner in the firm. “We were constantly having discussions about what they love and how to incorporate that, with an exploration of other design genres.”

The four-story house with basement was built in the mid-19th century, and suffered a fire in 1910 or 1911. It underwent a complete renovation then, but by the mid-1960s, it was in complete disrepair. A doctor bought the home, cut the first floor up into office and exam rooms, and lived in the three floors above.

Always a gracious house, it still stands in one of the grandest sections of Rittenhouse Square. “It was built originally for a family of substantial wealth and income,” she says. “There was an expectation of service – the original kitchen was in the basement.”

The 8,400-square-foot house is restored now to its original proportions, after its mid-1960s modifications. “We pulled it back where there were dropped ceilings and soffits,” she says. “The first-floor ceilings are 11 feet.”

When VMA’s clients bought it 15 years ago, it had lapsed once again into a shambles. Lovers of the Philadelphia Orchestra, the couple from Wilmington, Del. wanted to move to Center City to be closer to its concerts. They interviewed VMA for the project, went silent for six weeks, then awarded them the project.

This was no ordinary renovation. It was to be phased, with the first initiative a move to build a garage at the rear garden, and upgrade the home‘s mechanical systems. “The house has every contemporary amenity in terms or wiring, heating, cooking and the Internet,” she says. “But there’s no sense of that, because there was no compromise.”

Once that was complete, the architects stepped into the design phase. The clients moved out for two year, and the architects and interior designers from Executive Interiors tackled the entire house. “There was extensive work,” she says. “We changed around the upper floor staircase for access to the attic, and then every single wall was touched in some way.”

Their clients set out on a buying spree, sending back handpainted wallpaper from England, along with myriad marble fireplace mantles. Some of the original mantles carved out of Pennsylvania marble, dark and striated, remain.

No detail was too small to be overlooked. “The designers did these really amazing draperies and furniture in the dining room, and I was called in to do the paint colors,” she says. “I said: ‘I can’t just pick a paint color,’ so I went back to the office and photo-shopped the colors.”

It took her and an intern two weeks. “I went back and printed out the interior elevation with the colors shown, and they picked one,” she says. “It took the painters a month to paint the room, because it was not just one color – it’s about four.”

Moldings are eight inches, and baseboards,10. “We had to do a lot of research for the standing and running trim that was originally there, because the doctor had stripped it all out,” she says. “It was a guessing game.”

At the first floor rear, the architects designed a library –with books hidden behind wood panels. Then there’s a small breakfast kitchen, placed at the rear of the first floor to look the garden.

In fact, the whole idea of the garden was not to be in it but to look at it. “The hedging forms a knot – with vines and roses climbing around it,” she says. “There are four iron armatures that are four feet tall and four feet round to support vines growing vertically. It’s very formal, and you can see it from master.”

The clients’ passion for contemporary art (she’s an artist interested in platinum print photography), cooking, sailing, music and flowers drove the rest. One restriction was that no fabric in the home could feature any flower not in existence when the house was built.

The rear room on the second floor is sparsely decorated, with only a grand piano and a fireplace. And because the couple loves to sail, they often give dinners for their crew, in the green dining room with a floor painted in multi-colored parquets.

Those dinners emanate from a kitchen with 12 feet of cooking surface and a fireplace with spit for roasting. “They love, love, love to cook – and one of my great passions is to go over and help,” she says. “A city inspector once came over and said the renovation had to be shut down because there was no permit for a restaurant.”

That’s an indicator of the serious level of detail in this home’s redesign. Twenty-two-feet wide and 100 feet long, it’s a place where the clients’ joys, passions, and individualism are lavishly articulated. 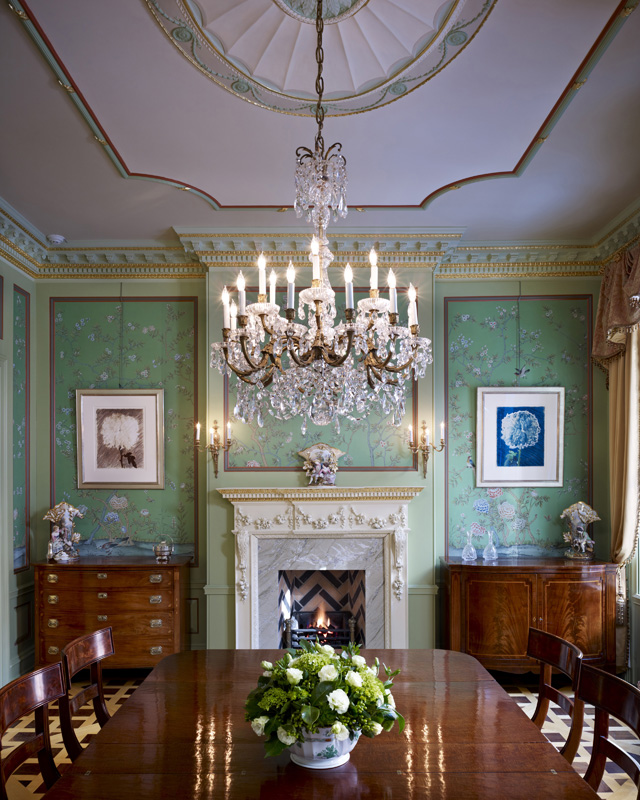 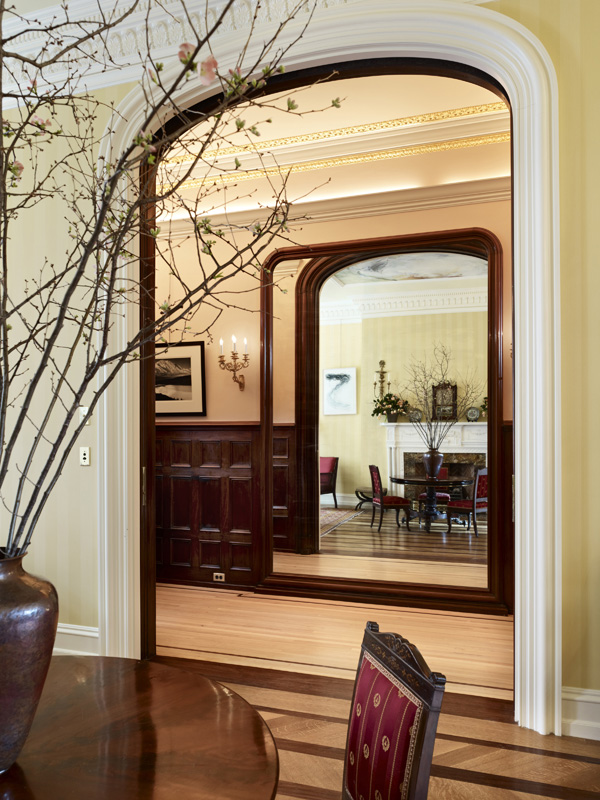 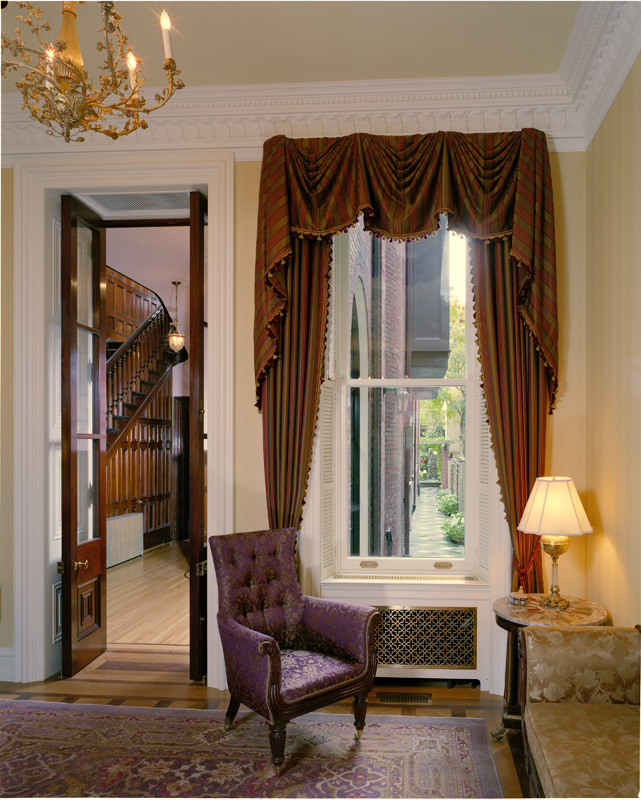 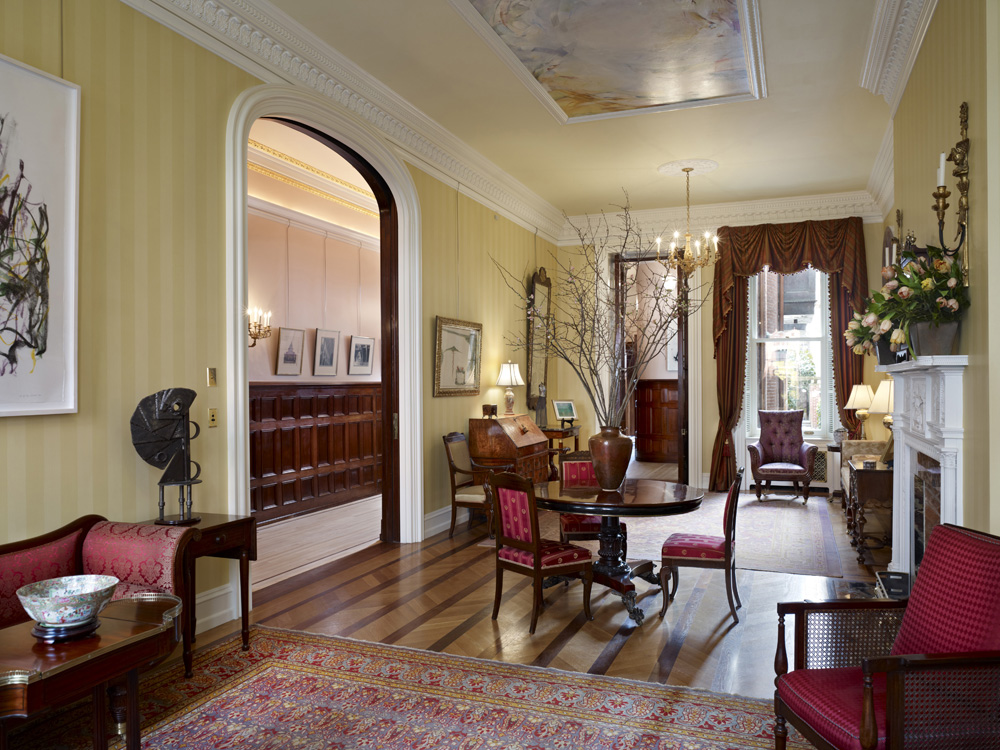 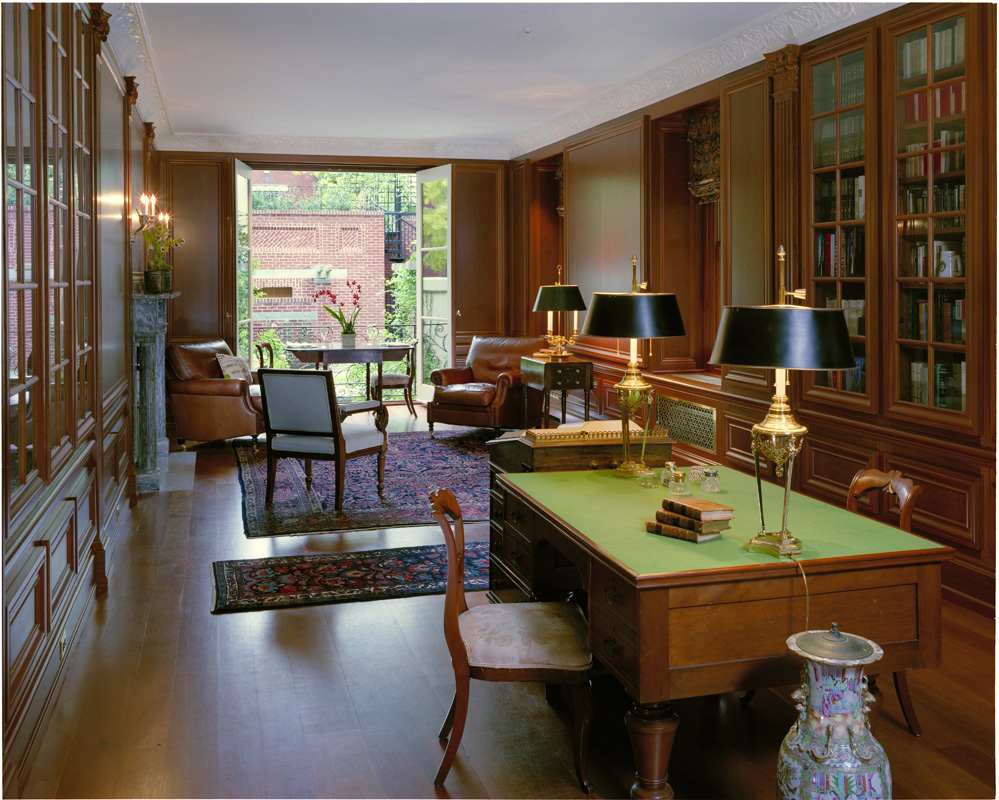 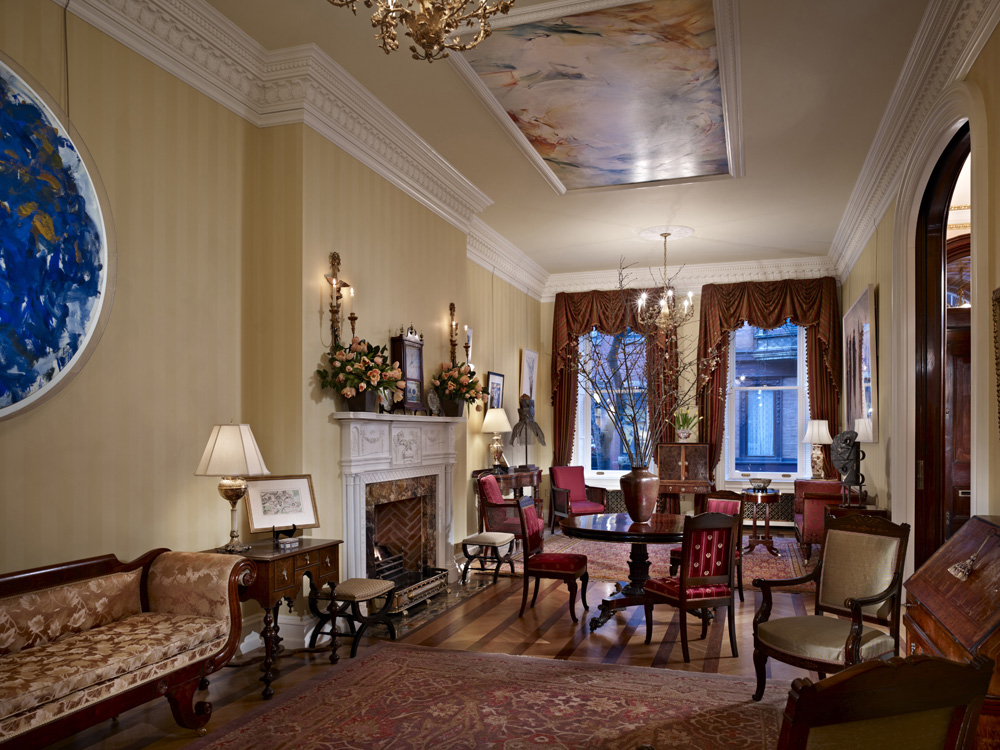 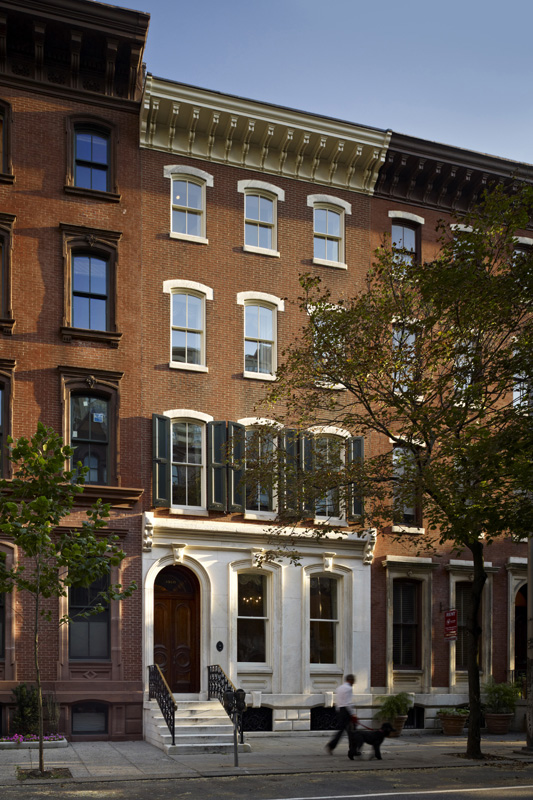 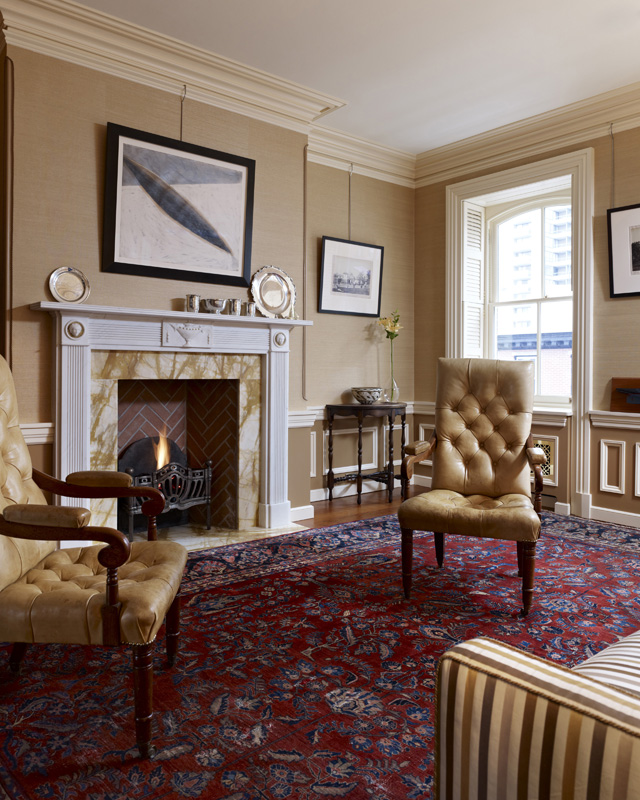 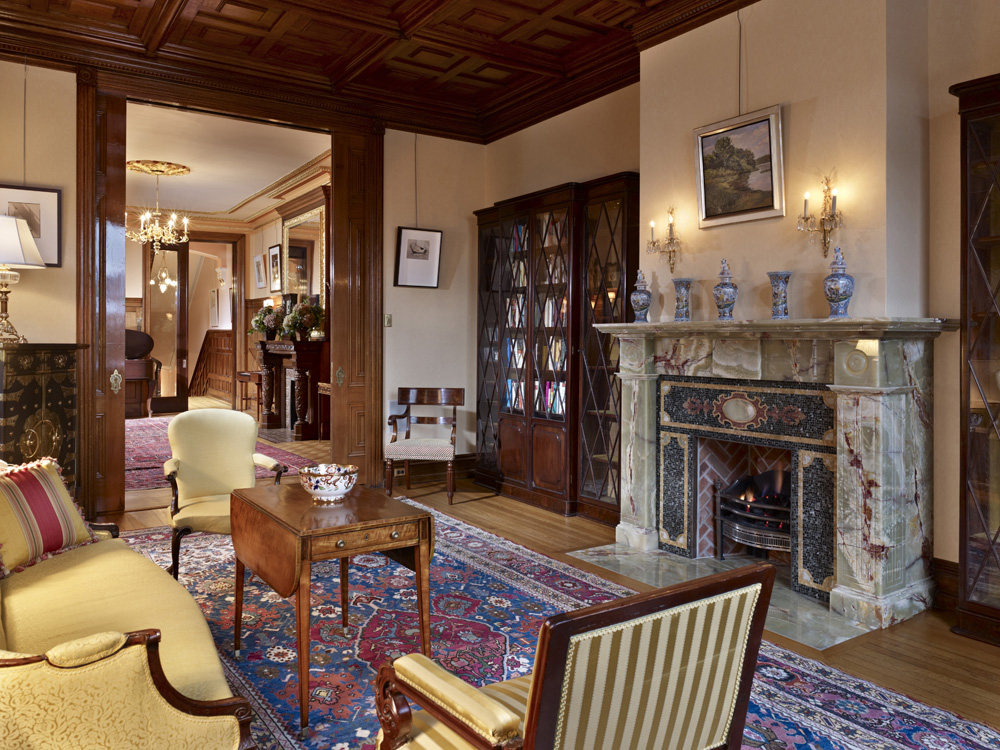 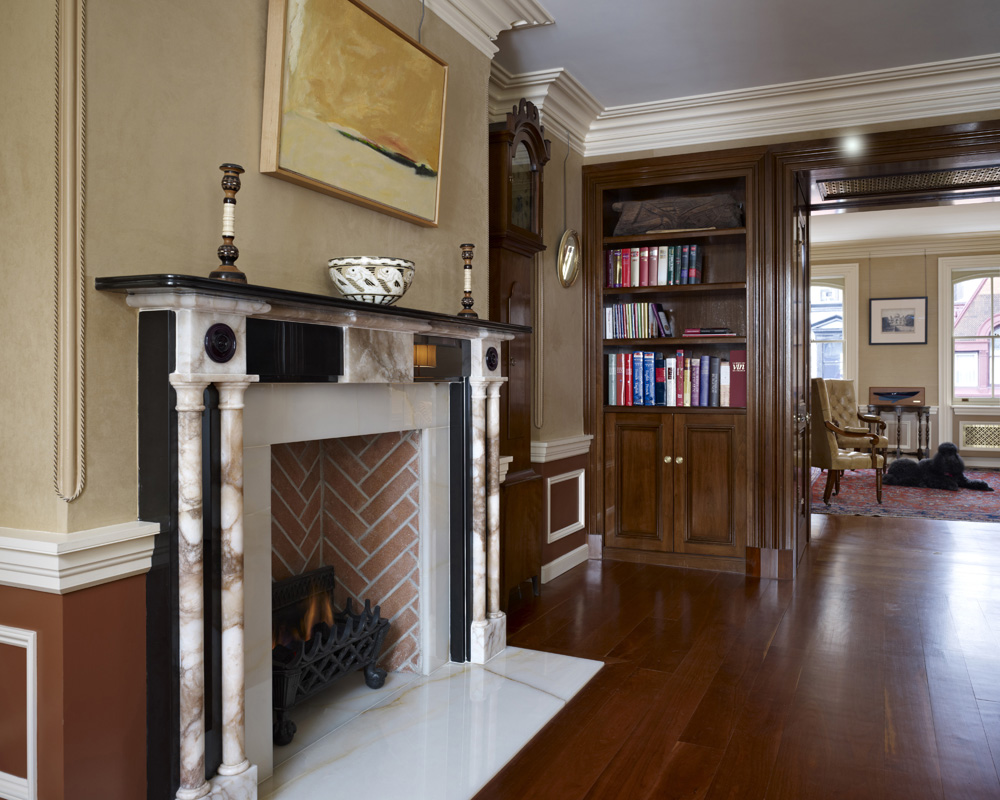 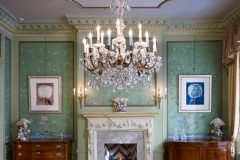 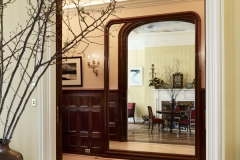 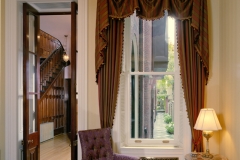 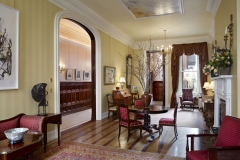 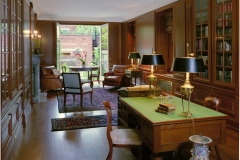 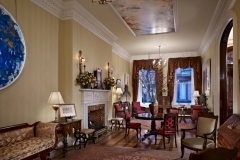 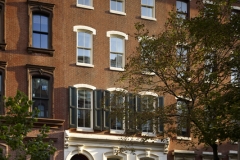 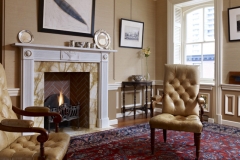 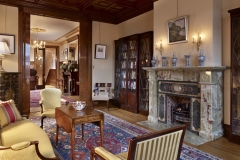 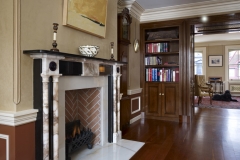 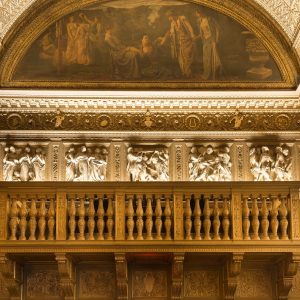