“Yale married us,” Centerbrook architect Mark Simon says.  “After interviews, the school selected Hopkins as design architect, and then asked if they would work with us as the executive architect. It was Hopkins’ option at that point, though Yale had asked us if we were willing to be considered.  Our role, as I saw it, was to be the conductors of the symphony, with Hopkins as the star soloist andcomposer.”

The premise was to design a building with as small an energy appetite as possible, and still fulfill its promise. “These are old lessons,” Mark says. “I was doing them back in 1974.”

The architects used thermal mass to moderate its heating and cooling demands. “We took advantage of thermal momentum – once it gets to a certain temperature, it wants to stay there,” he says. “Heat or cooling is absorbed into the concrete and retained overnight. Outside there may be big swings in temperature, but inside there are small swings.”

“With the displacement system, you end up using smaller fans for lower initial costs, and then they don’t have to work so hard,” he says. “You don’t have to heat or cool as much, because you’re heating or cooling the human strata rather than the whole room.”

The firm has won more awards for the building – twelve so far – than for any other project in its 35-year history. But there’s also the satisfaction of doing the right thing. “We’re happy to be back in the solar fray,” Mark says. “It feels so good.”

And looks good too. 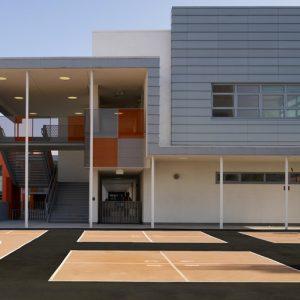