Landscape architect Chris Counts has cast an ambitious and imaginative eye upon the Forum in Rome.

A visiting professor at the University of Virginia and former senior associate with Michael van Valkenburgh in New York, he earned his master’s degree in landscape architecture from Harvard’s School of Design.  He recently established Christopher Counts Studio LLC and now plans a return to New York from Charlottesville.

But for a year in 2007, after winning the Rome Prize, he found himself sketching and painting the public squares of the Italian city, as well as others in North Africa and Spain.  “I ended up financing my travels in Rome by doing that,” he said.  “I sold my paintings to some serious collectors.”

But at the same time he was studying the makeup of the ancient sites in the Eternal City, while analyzing the patterns of movement within them.  “The drawing forced me to sit for hours and hours in the Piazza Navona, which was so lively, and the Forum, which was walled off and kind of like a junkyard.”

He began to re-imagine the Forum’s use as a public space, and how it might be reconnected to the rest of the city again.  He thought about a landscape intervention to bring visual clarity back to a site that seemed jumbled and disordered.  He envisioned a series of three-foot-tall earthen causeways imposed upon the old network of roads there.

“What’s interesting about the use of landscape is that it’s a malleable material – it can come and go,” he said.  “One common practice in archeology now is to excavate, digitally map the area, and then cover it back up.  It’s the best way to preserve it – essentially, you’re protecting anything of value to look at it in the future.  It’s an evolving matrix.”

Thus was born the concept of reclaiming the Forum as an everyday useable space, instead of as a museum.  “It’s the heart of Rome,” he said.  “Why can’t it be a specific kind of park – a place for movies and events?”

He’s suggesting the introduction of rows of trees atop his causeways, for spatial character and to frame the views of sites where buildings once stood.  The plantings are to be raised so that roots don’t disturb the historic fabric.

“It’s a linear park system that follows the ancient street pattern,” he said.  “It’s an opportunity to implement some appropriate pieces of earthwork so that you can actually see where the buildings used to be.  It’s a place that could be used by people – for jogging, or a shortcut through the city.”

And perhaps, a way to honor the Senate and the People of Rome – both living and ancient. 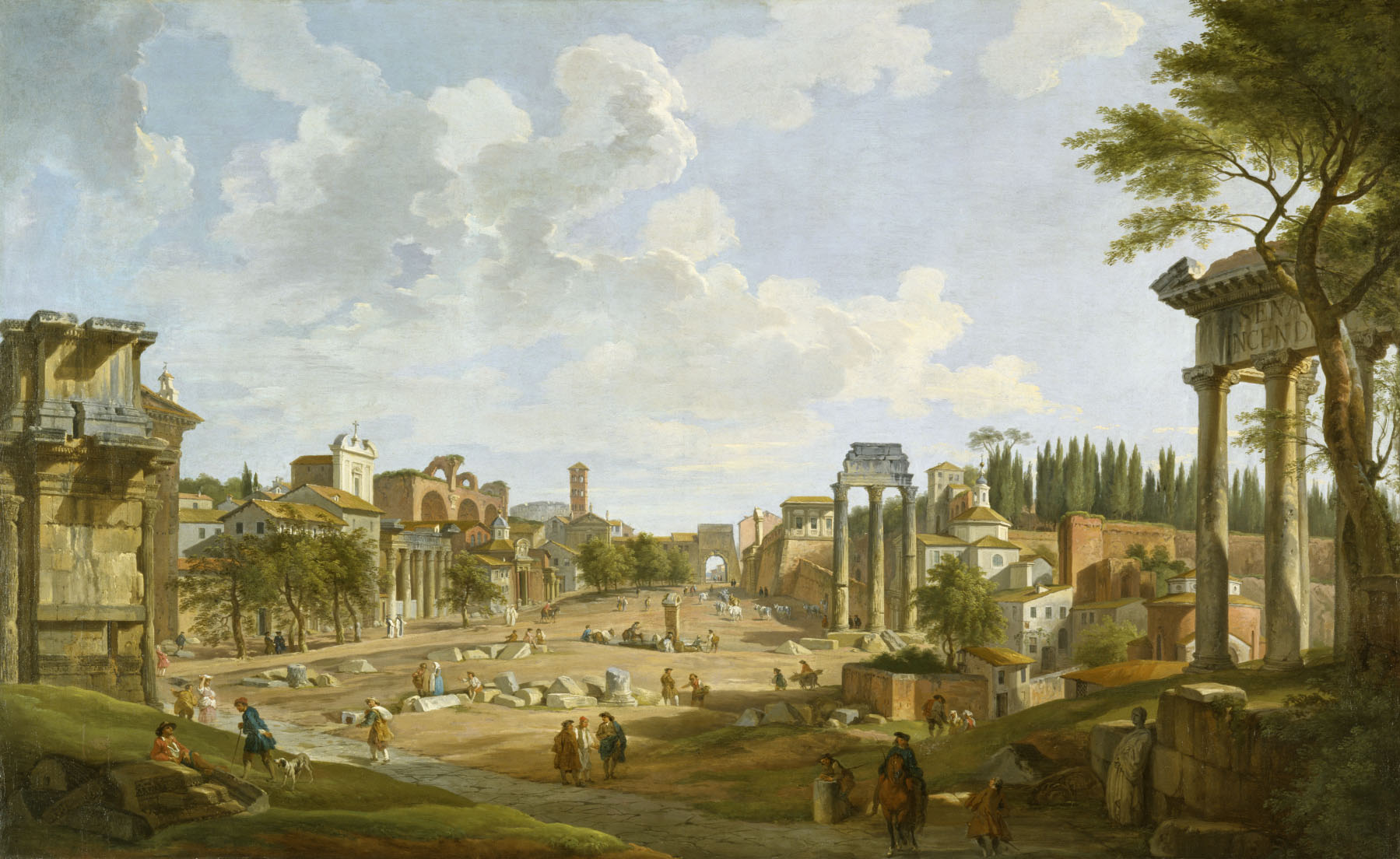 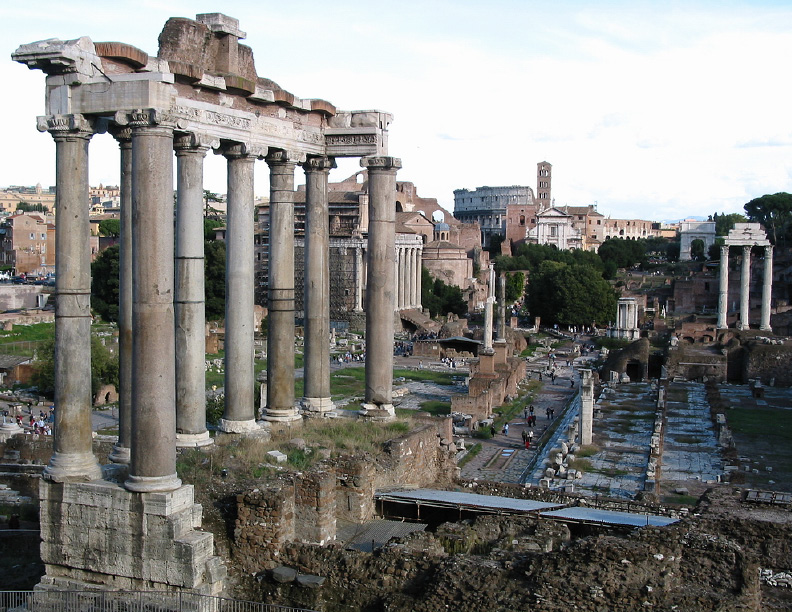 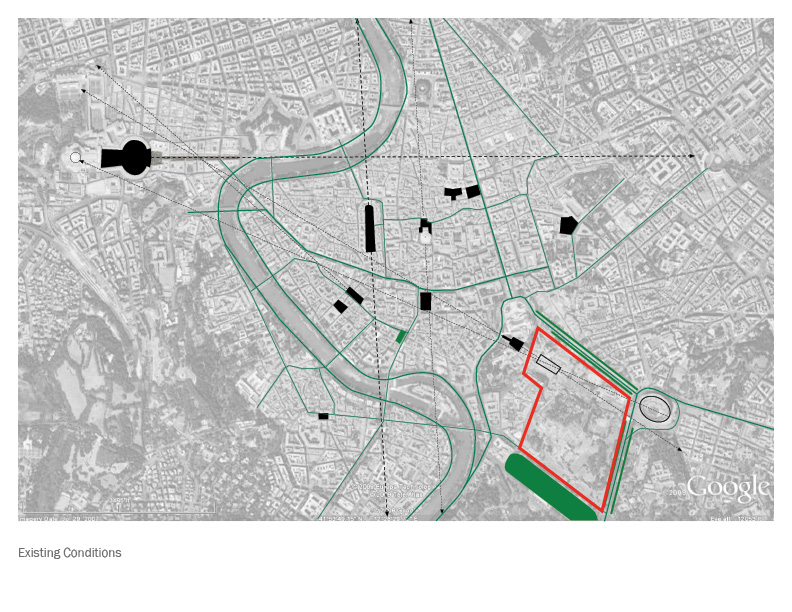 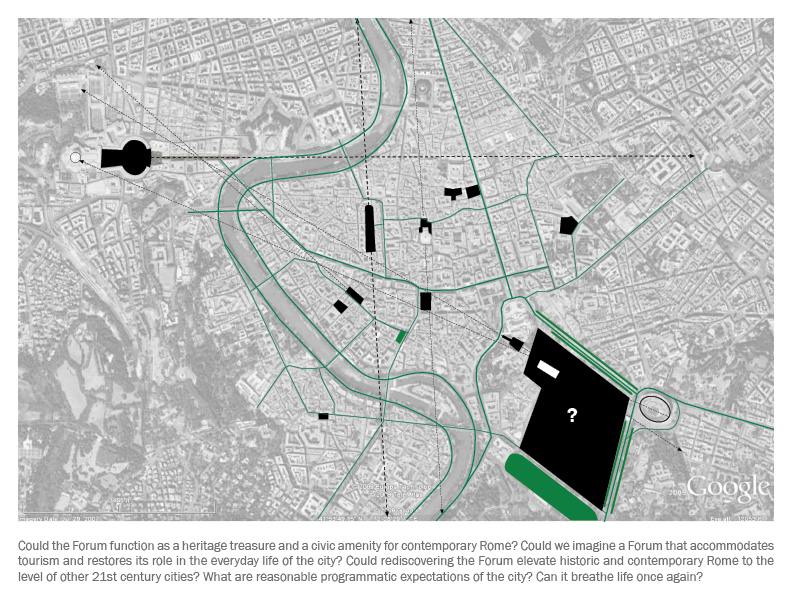 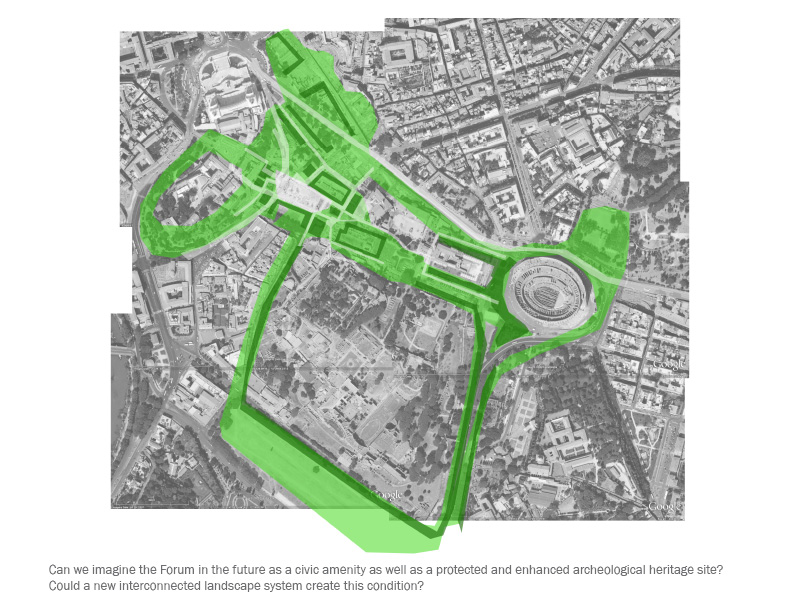 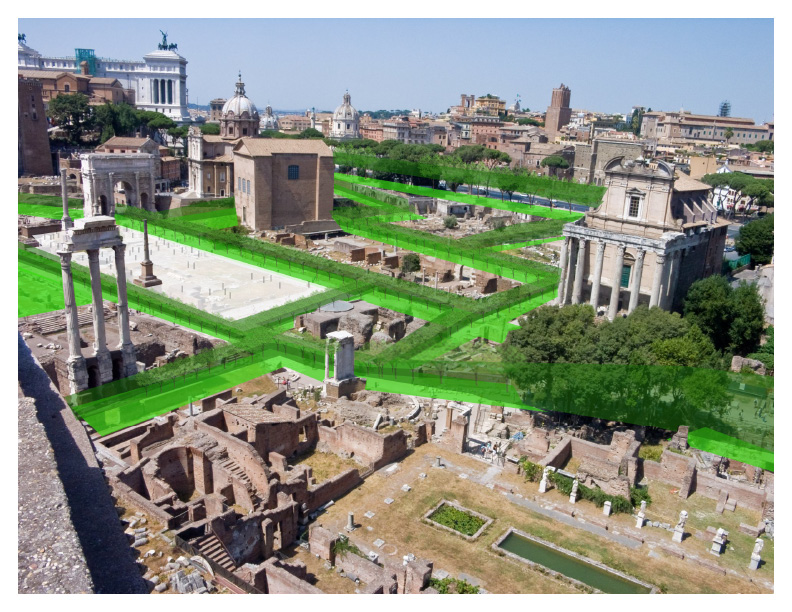 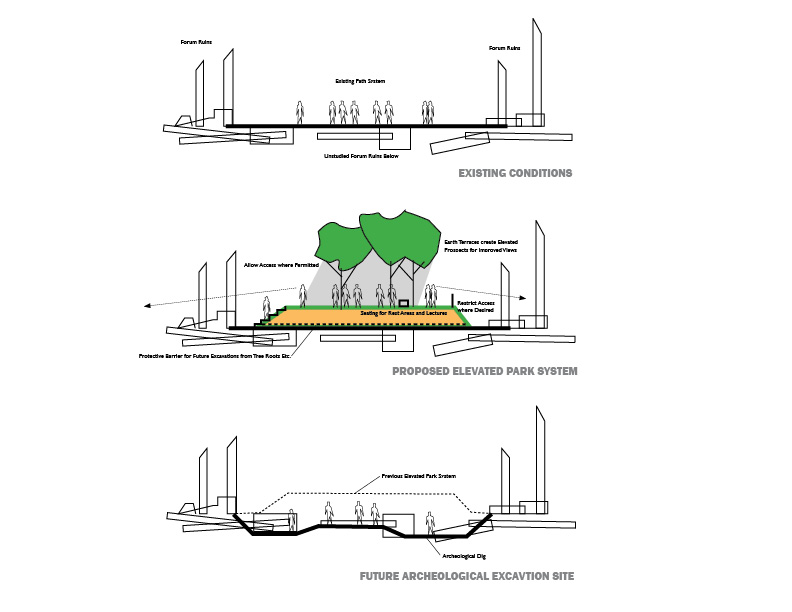 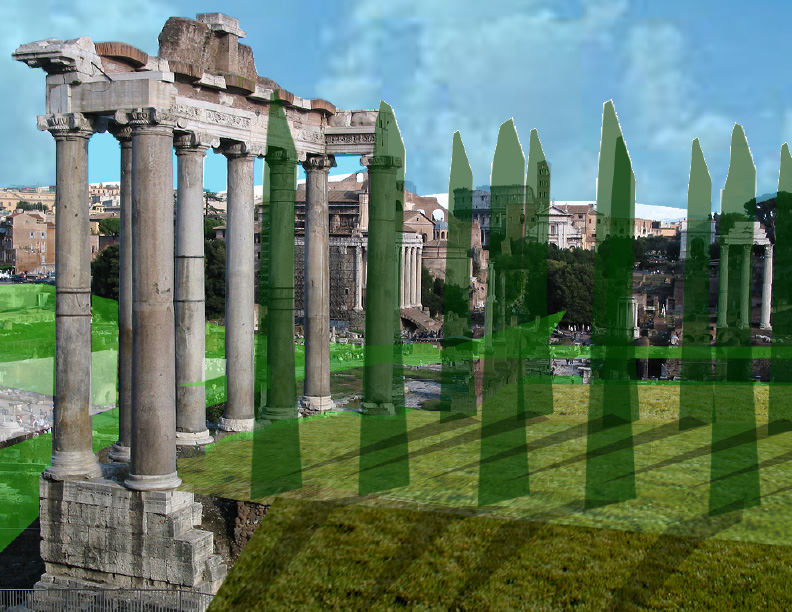 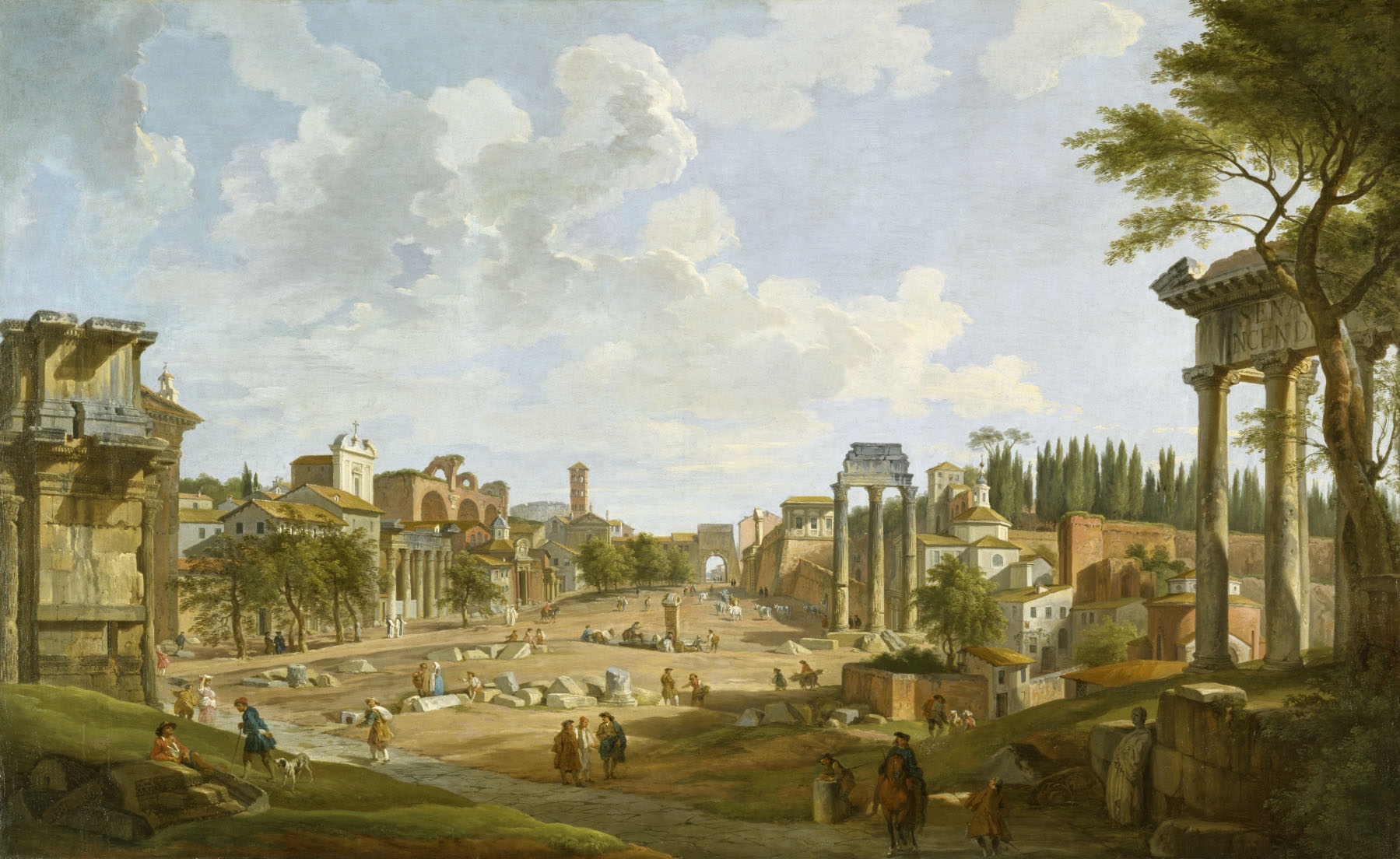