This week, A+A will be devoted solely to the Kimbell Art Museum in Fort Worth and its new pavilion by the Renzo Piano Workshop. On Monday and Tuesday, we’ll look at the relationship between the Louis Kahn and Piano buildings, as well as at the new galleries. Wednesday through Friday, we’ll host a series of guest posts on the history of the museum’s choice for the site of Piano’s pavilion. They’re by Robert McCarter, noted architect, educator and author of one book on Louis Kahn, two on Frank Lloyd Wright, and another – his newest – on Carlo Scarpa. First, though, a look at the new museum:

It may be safe to say – whether you favor the site of Renzo Piano’s new pavilion or not – that Louis Kahn’s Kimbell Art Museum has never looked as good as it does today.

That’s because the new structure, sited some 65 yards to the west of Kahn’s barrel-vaulted masterpiece, has been designed deliberately to offer a long and dramatic vista of its predecessor. When a visitor emerges from the new underground parking lot’s stairway or elevator, the view is aligned and directed toward the 1972 museum. Even from deep within the new building’s transparent spaces, the original beckons.

The sight of Kahn’s opaque, travertine-clad structure, behind its lengthy horizontal fountain and entry grid of Yaupon hollies, is magnificent enough to make the visitor wonder, almost out loud, about what might be inside. On the other hand, Piano’s pavilion reveals all – through 15-feet-tall panels of floor-to-ceiling glass at six foot intervals. Its columns and walls are luminous concrete tinted with two percent titanium oxide, for a near-marbleizing effect. Its light-transmitting skylights and louvers are supported by a steel structure bound to a series of 29 laminated bands of Douglas fir, 100 feet long and 10 feet apart, whitewashed to mute their naturally reddish tone.

Even at night, Piano’s emphasis is on transparency, with sun-filtering window screens raised to allow outsiders a glimpse of sculptures, paintings and activities inside. “It’s a whole different thing at night,” says Onur Teke of the Renzo Piano Workshop. “You’re looking into a gallery with some of the finest art in the United States.”

Some say Piano’s building is engaged in a father/son conversation with Kahn’s, but a more accurate assessment might be that the 76-year-old Italian architect simply looked and listened with excruciating care to what came before him – and then worked mightily to reinterpret it.

So now we have a new structure that’s all glass, wood, steel and concrete, hovering in the distance (“It’s a Piano building – it has to float,” says Hammerman). Created in a similar one-story scale with a tripartite plan, this is the Kahn building, stripped down to its bare-bone essence of shimmering light and weightlessness.  Here, though, there are no curves, no barrel vaults and no sinew. Instead, the new pavilion is all about right angles and carefully poured concrete walls that cant at 10 degrees for staircase and light well.

Indeed, the staircase and light well, inspired by Kahn’s own design, stand as symbols of Piano’s desire to defer to the man for whom he once worked, but still assert his considerable ability as an architect.

In all that, he succeeds. And eventually, the long view of his own building, as seen from its predecessor, also will be revealed. At the moment, though, it’s obscured by that grove of young Yaupon hollies, replanted to make way for the underground parking lot.

But over time they’ll grow, the vista will open up, and we’ll have an even clearer look at the architect’s vision.

For more information, go to https://www.kimbellart.org/ 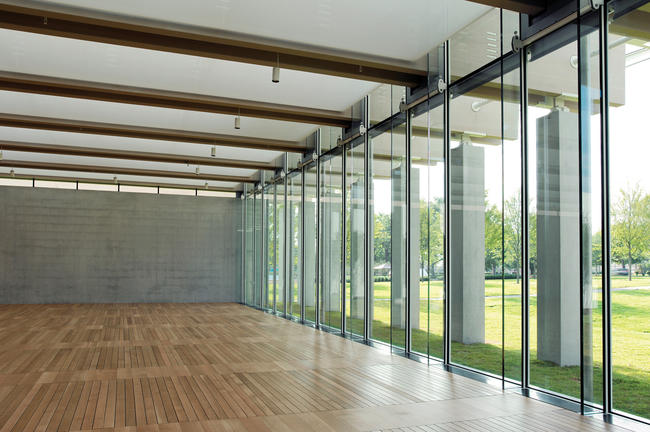 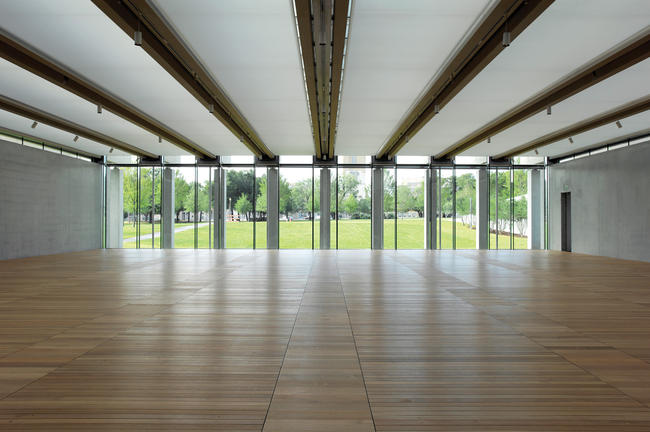 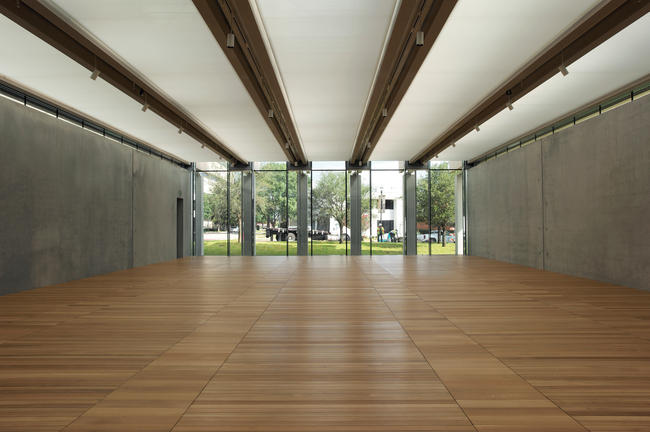 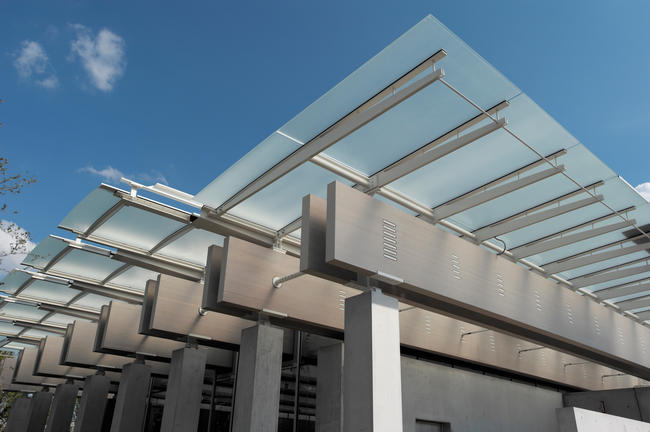 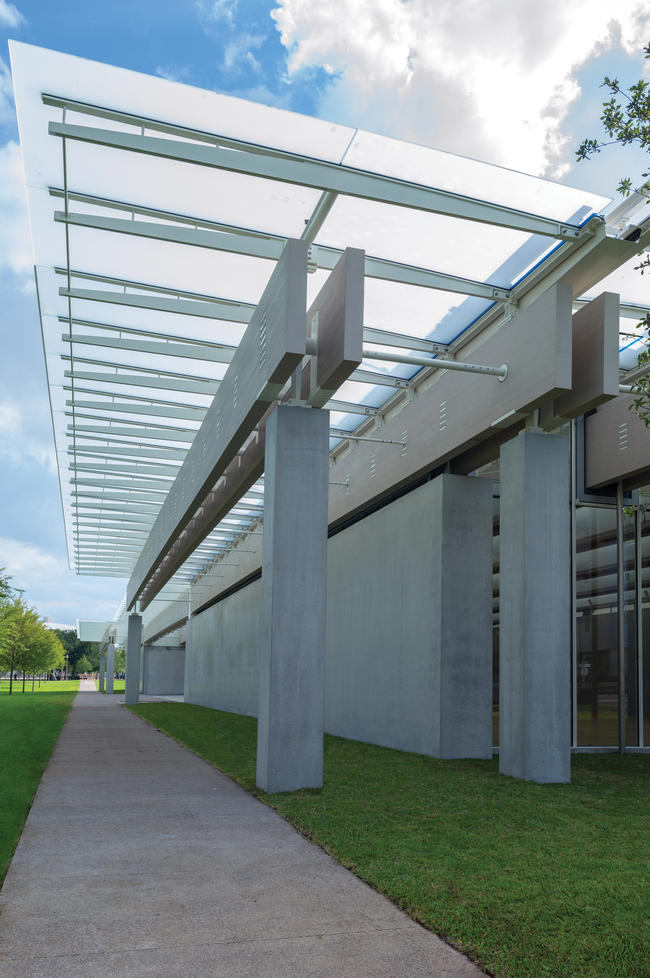 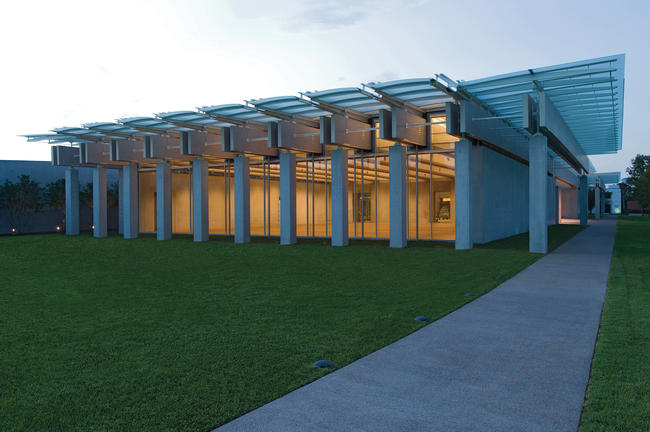 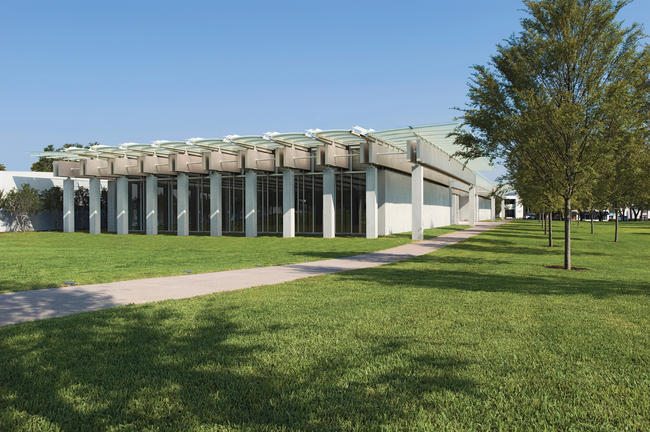 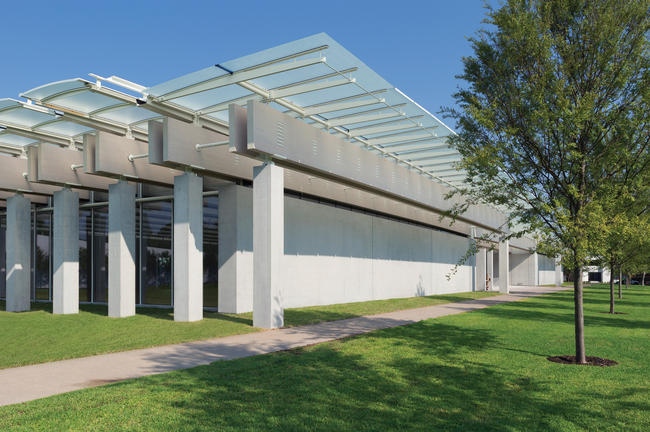 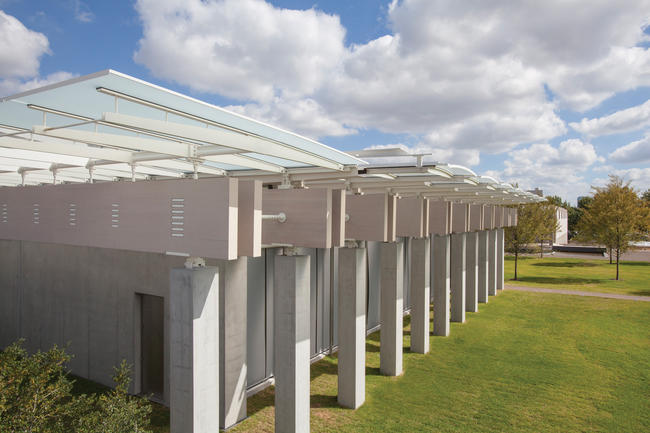 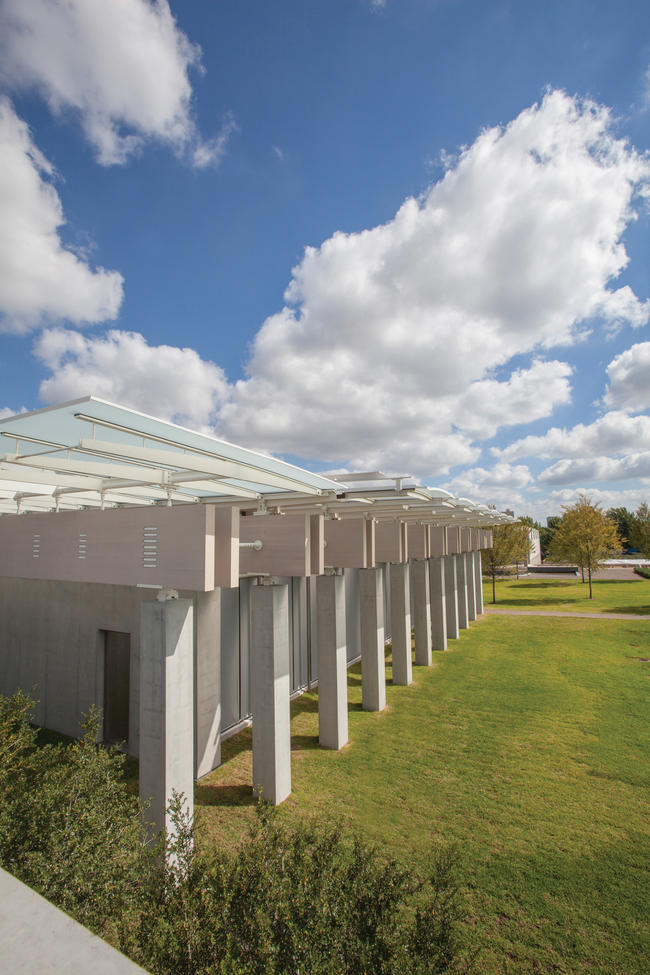 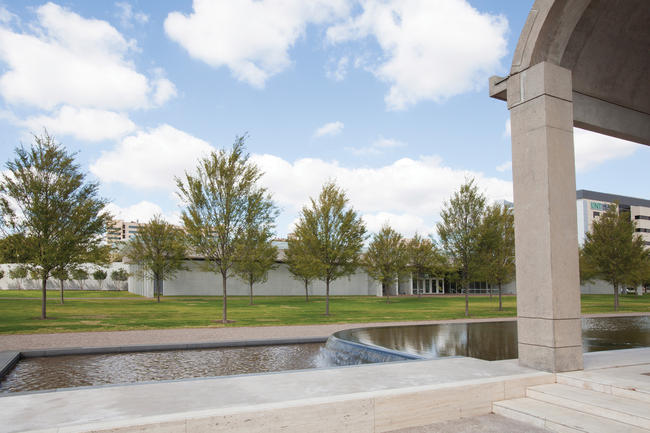 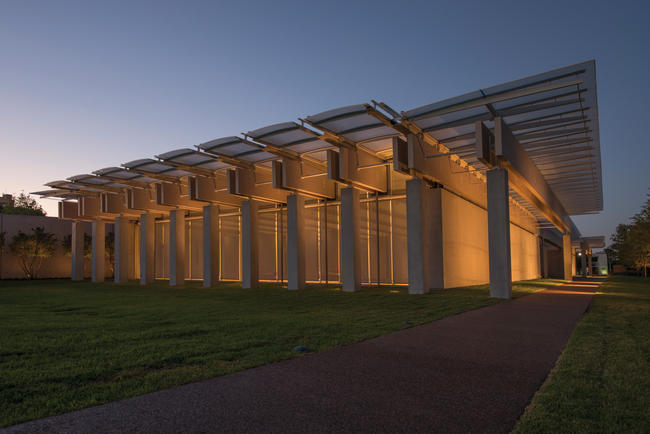 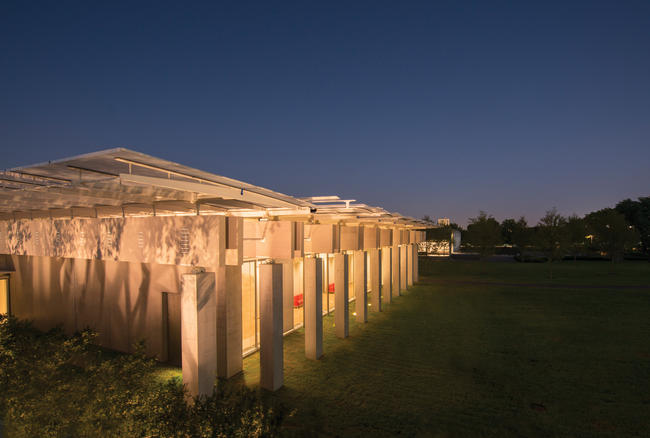 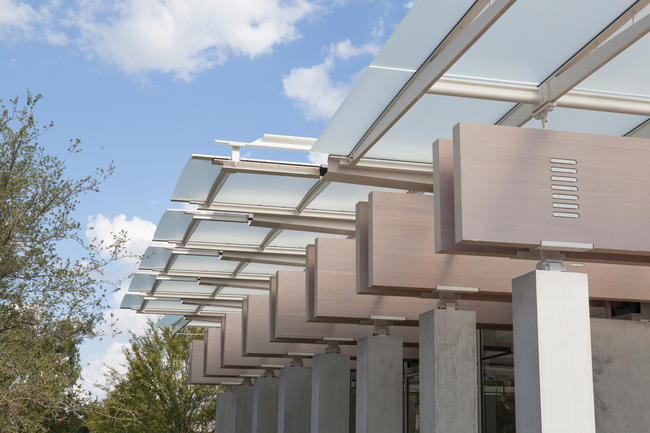 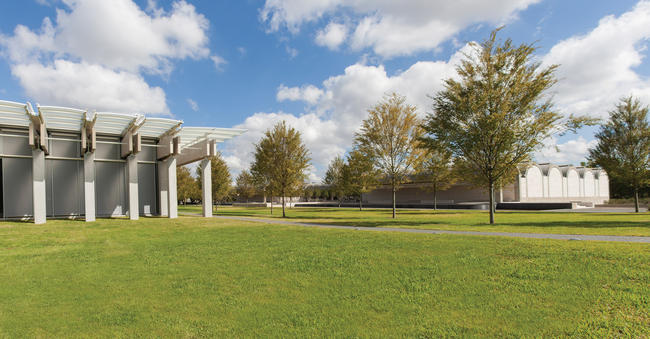 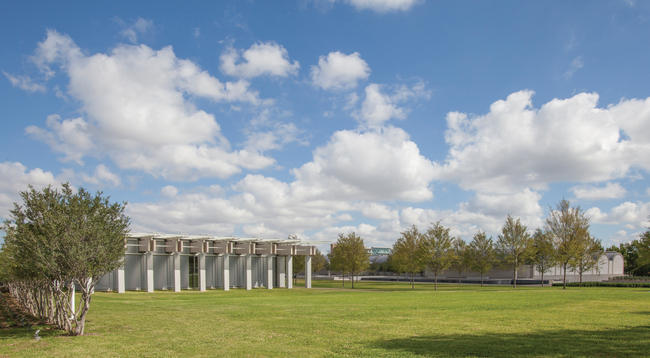 Sound, Light and Sights at the Kimbell

Danish architect Bjarke Ingels may have opened an office in New York three years ago, but now he’s spending more and more...