Emma Biggs got her start with mosaics in the 1980s after looking up the word in the Yellow Pages.  Through a television program, she’d discovered that there were still  descendants of Italian artisans who’d arrived in Great Britain in the late 19th century, living and working in London.

“A mosaicist gave me a job cleaning his house,” she says.  “That’s how I got started.”

She’d already studied Fine Arts at Leeds University, worked as an assistant to Vivienne Westwood, even ran a tour management company for rock bands – but piffle!

“Once I started making mosaics, I felt I had found what I wanted to do,” she says.

Today, she is one of the foremost mosaic artists in the world.  Her husband, Matthew Collings, is an art critic, writer and broadcaster who’s hosted a number of BBC programs, including the very popular “This is Modern Art.” Together they make collaborative paintings – and recently opened  a new exhibit at the Vigo Gallery in London.  Their paintings are based on photographs they take of surface details like doors and fenestration – but they look to Biggs’s work in mosaics as well.

“Our work has run alongside my mosaic career, and his career as a critic and broadcaster,” she says.  “Our work together has increased in significance for both of us, and we spend much more time working together than we used to.”

Gradually, their roles have become formalized.  Biggs designs the paintings, choosing and amending color and tone; while she’s doing that, Collings is painting them.  The couple may argue, but not about their roles within their paintings

In her mosaics, Biggs uses no single palette, but instead relies on the unexpected.  “In any palette I may use, what I value is surprise,” she says.  “Surprise can be more subtle than you might think.”

Uncertainty also plays a role. “I don’t want them to be entirely readable at first glance,” she says. “But I try to create a balance between comprehensibility, and the sort of pleasurable confusion that keeps you looking.” 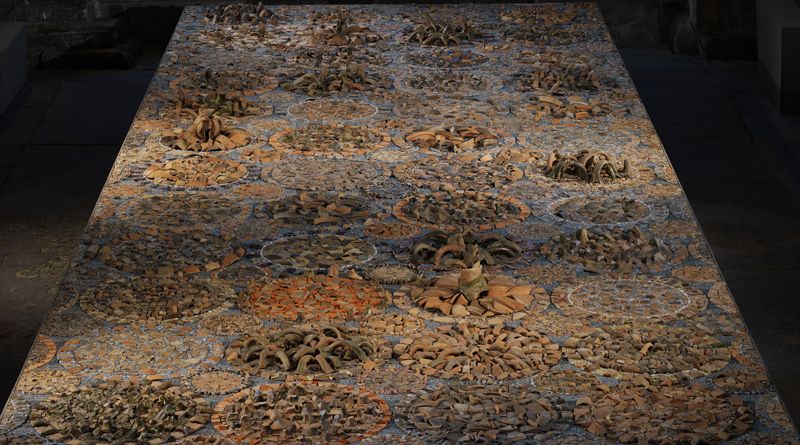 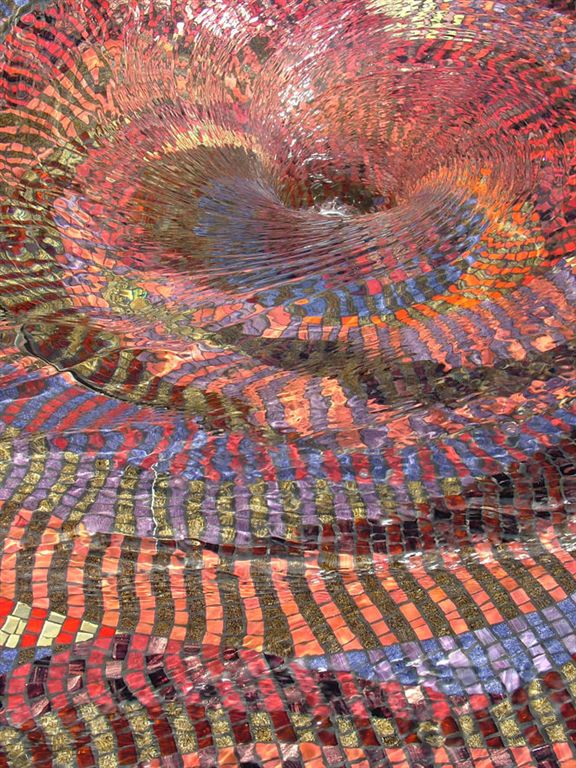 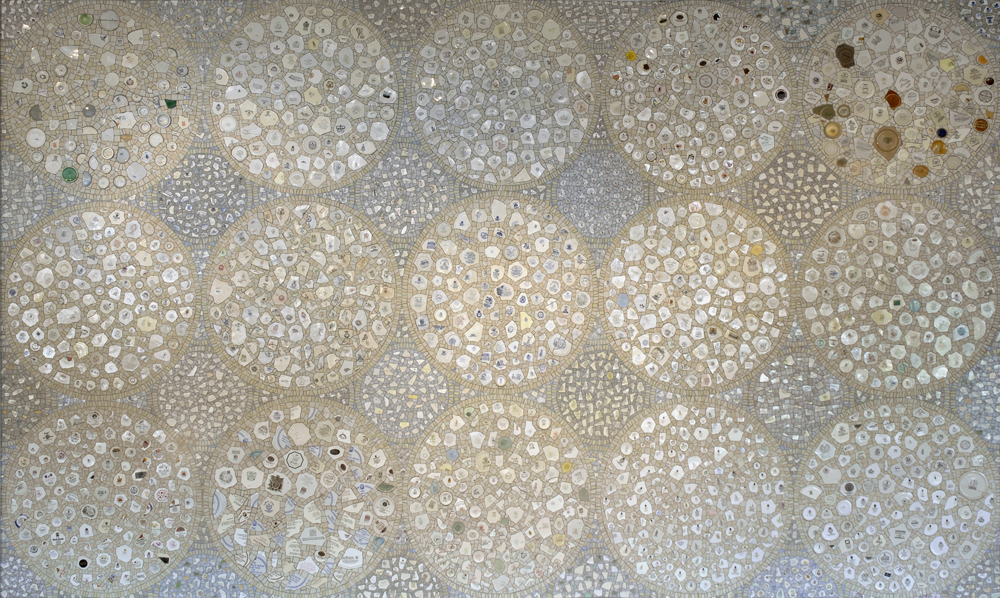 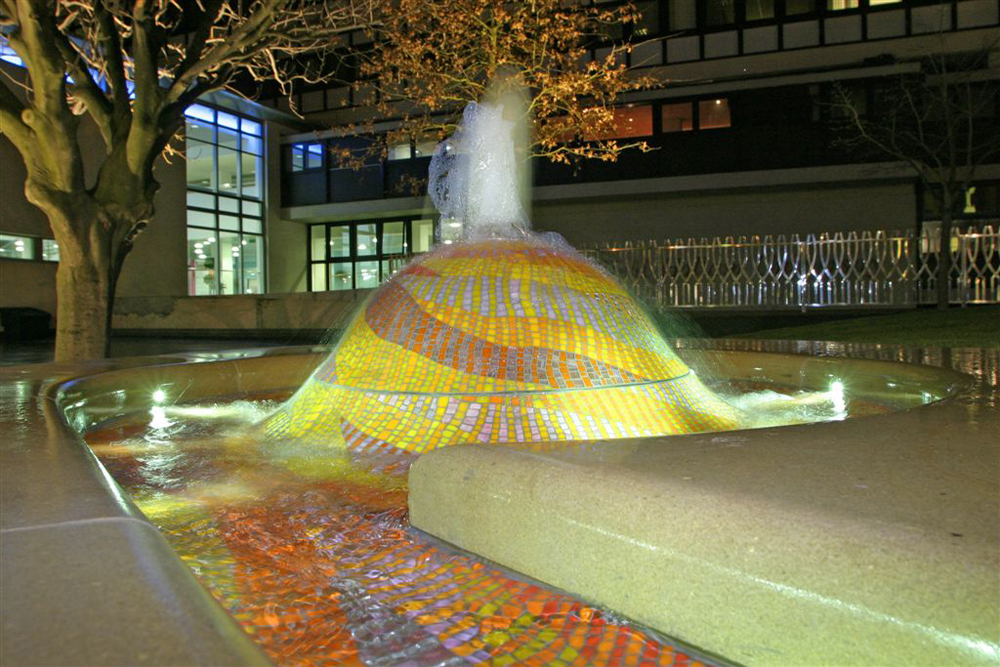 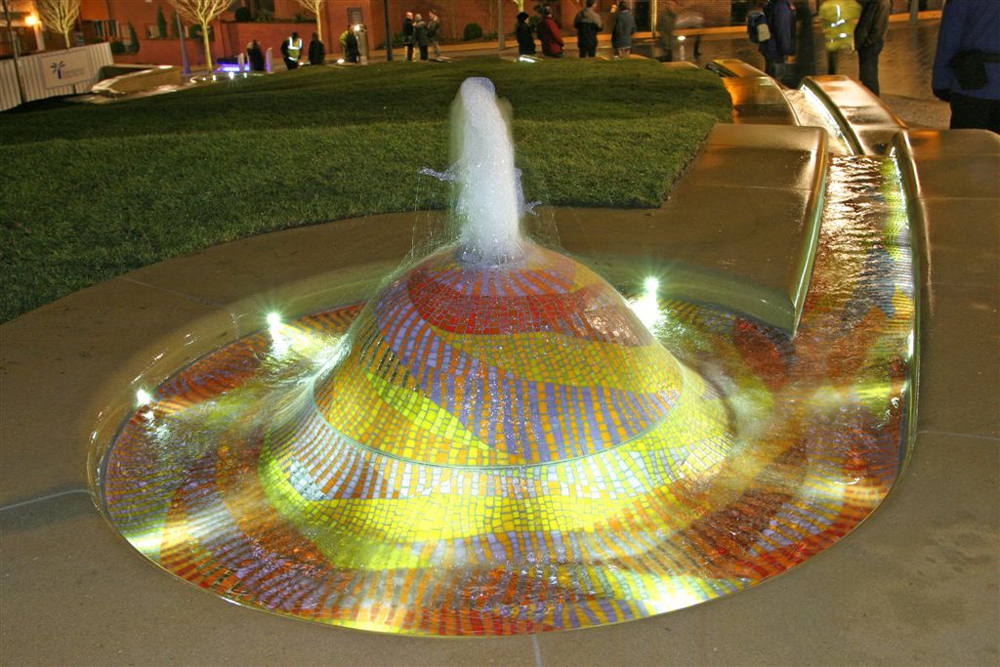 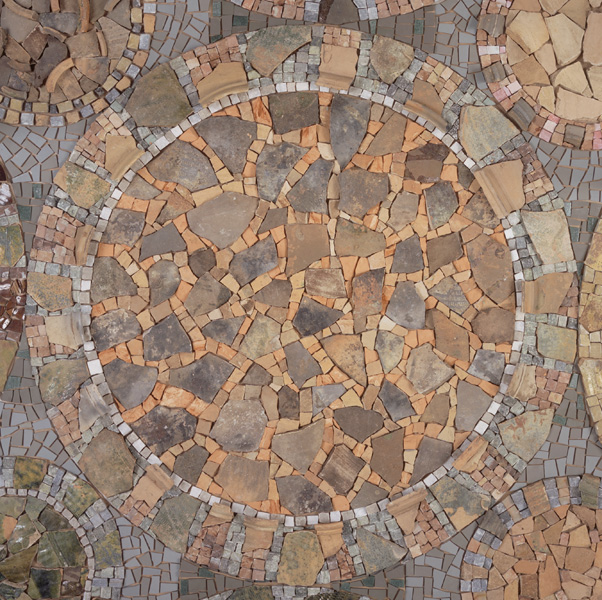 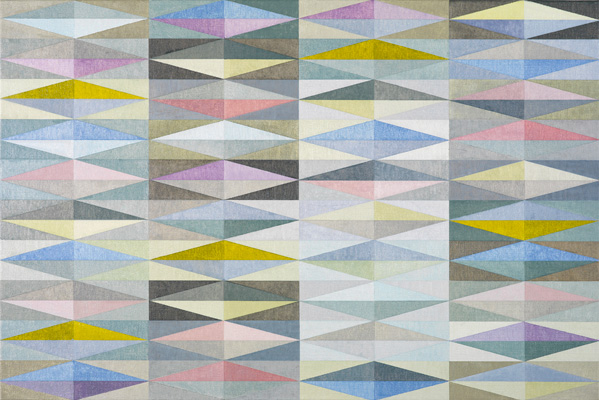 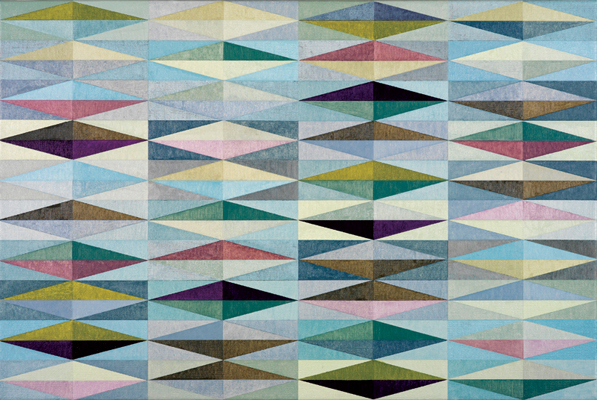 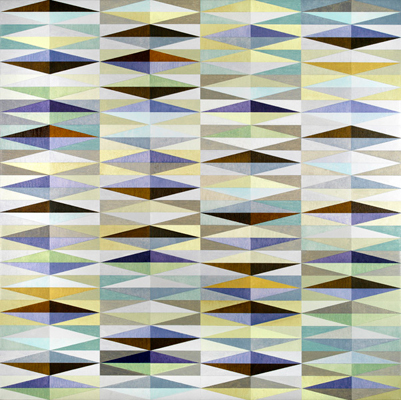 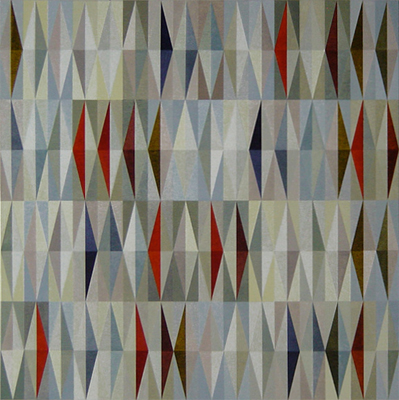 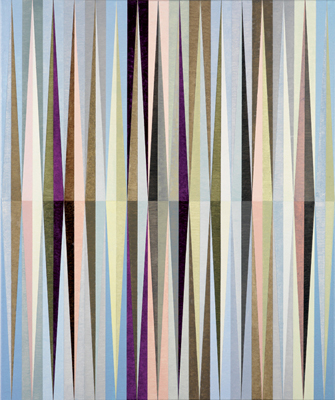 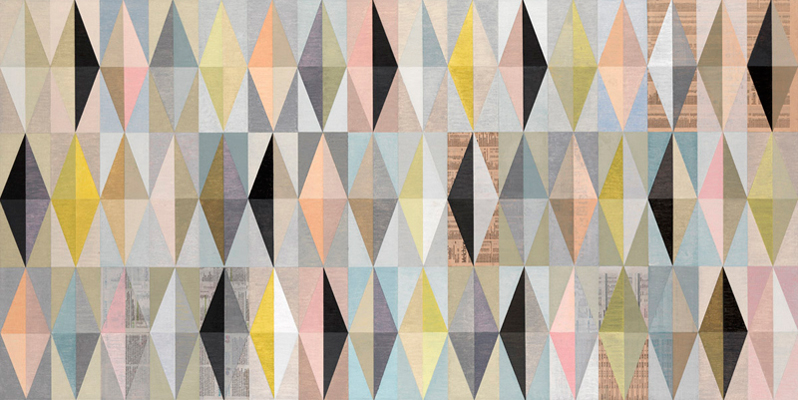 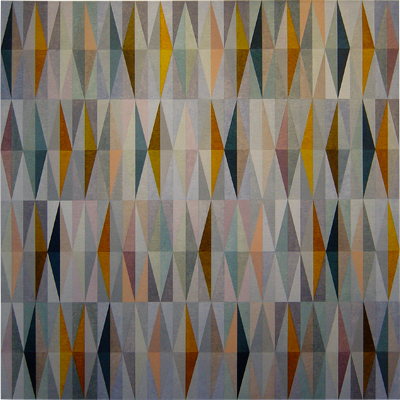 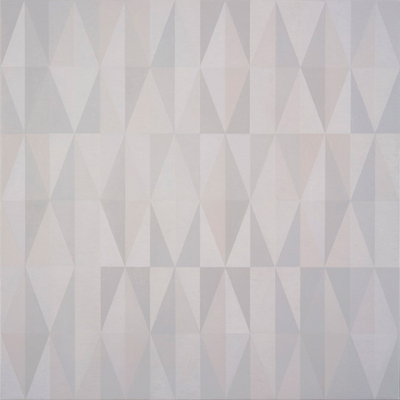 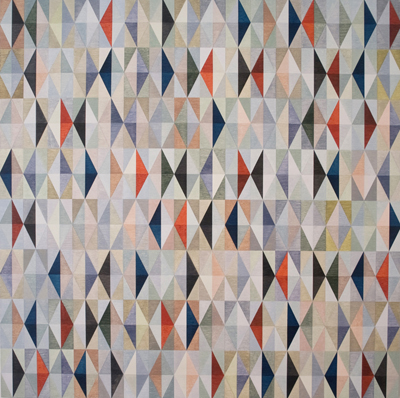 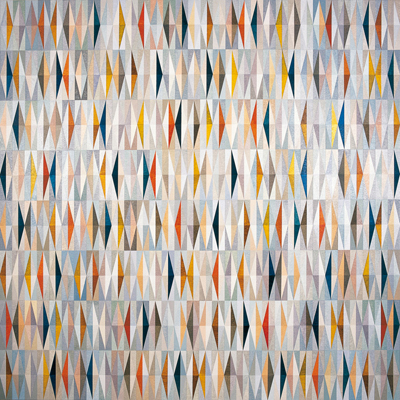 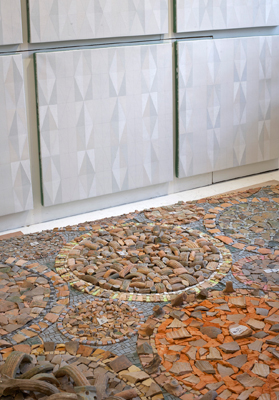 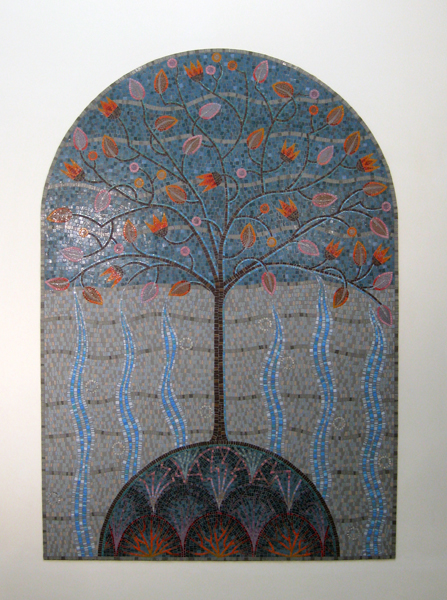 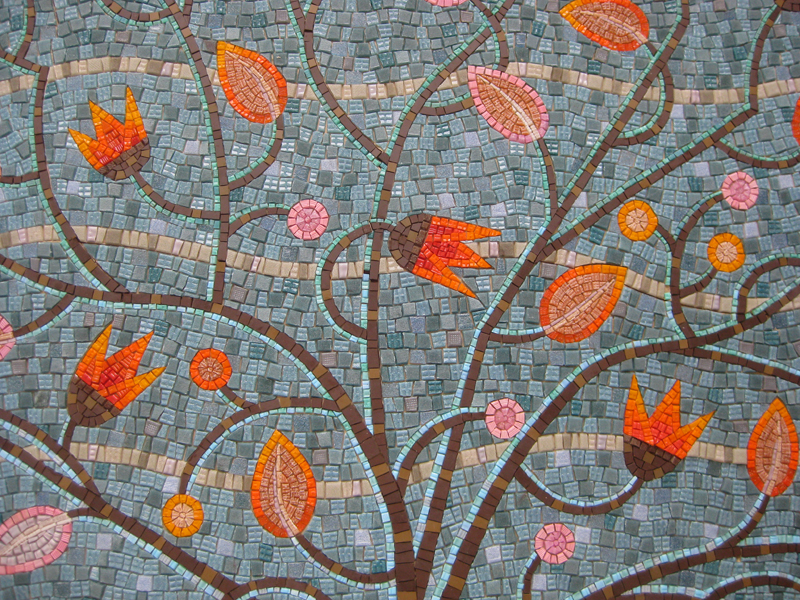 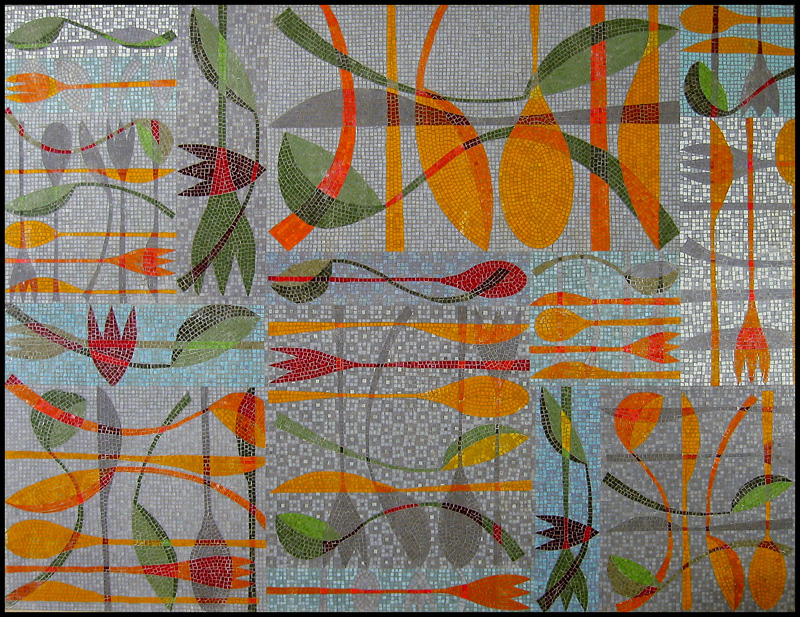 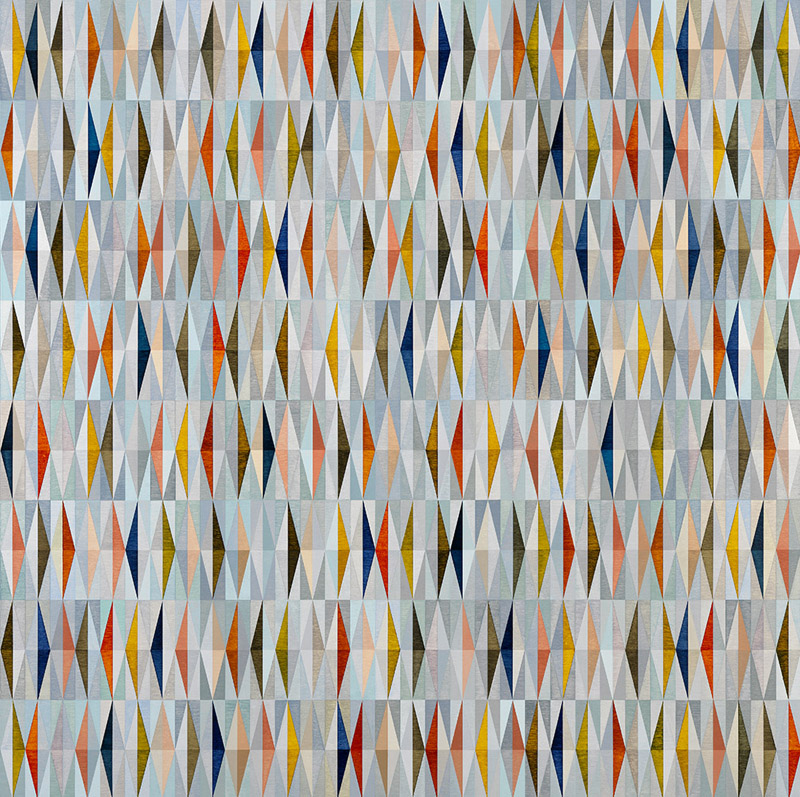 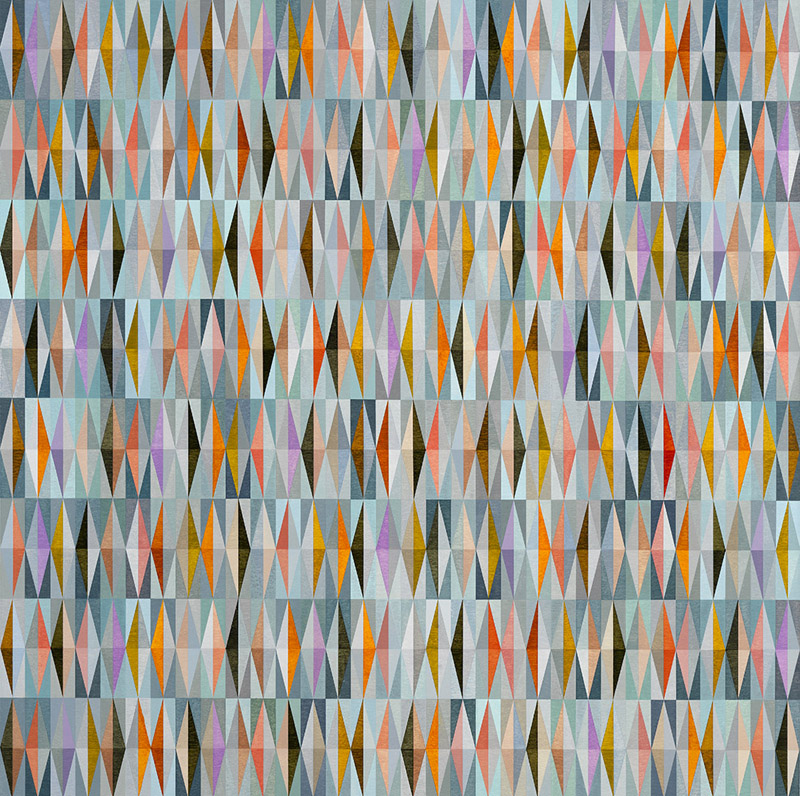 For more on Emma Biggs, go to  http://www.emmabiggsmosaic.net/index.html

For more on Biggs and Collings, go to  http://www.emmabiggsandmatthewcollings.net/

To see their work at the Vigo Gallery, go to  http://www.vigogallery.com/

In Hamburg, a Beatles' Tour, with Uke

Thank you so much for the write up, and for the kind comments. I thought I would put up a link to the catalogue of our current show. It has images (and an essay) that throws some light on how we think the forms in the paintings relate to the world around us. Hope you find it interesting

Your profile does honor to the subtlety and pleasure that the work conveys, JoAnn. The balance of intellectual and sensual delights is consistent through the images you show, and in what we’ve seen of Emma and Matt in the past. Love and envy this collaborative thing they have going. Yum. Thanks!

Supremely talented artists. Emma knows her colors. a couple years ago I was a student in one of her courses, and she made me use every color on the table in my study… I did it. 41 colors in a 6″ sq. piece, that didn’t suck. Talk about a Mensa brain teaser. Wish I were in London for the opening. Thank you for covering their body of work here.

A stunning collection. I could peruse Emma’s mosaics for hours. They’re always so harmonious and the colors so well integrated. Looking at their paintings reminds me of a Mensa brain teaser in which you have to define the pattern that is occurring and predict the next shape or color in the sequence. But finding the answer in this case seems impossible. Endless amusement!

Many thanks for the great post. Their work is fascinating on so many levels. I enjoyed the extensive collection of images very much.

It is so marvelous to view both the paintings and mosaics together in the slide show. The first time I’ve seen them presented together this way. Thank you for the wonderful and informative post.

So happy to see the work of Biggs and Collings showcased here. Between the two of them, the cover such a huge amount of territory in the art world – and they do everything brilliantly. I will be tweeting and FBing. Lovely job, really. Nancie

In Hamburg, a Beatles' Tour, with Uke

For the past eight years, Stephanie Hempel has guided 14,000 people along the rough-and-tumble streets of the St. Pauli...