Eric Engstrom is an artist who walked away from a very successful, 30-person interior design firm a few years back.

He got in his car in San Francisco and took his time driving east across the nation to his family in Massachusetts.  He eschewed the Interstate, preferring U.S. Route 1 and the back roads.  Along the way, he took photographs:  Of barns.  Of theaters.  And of industrial buildings.

All were in a state of entropy, some closer to collapse than others.  But each was from another time, and each suffered from neglect in a modern age.

“It was a good way to retire, and a good time to separate,” he said.  “And I wanted to examine what’s happened to the country.”

As he drove the blue highways, he came to realize that once the Interstate highway system arrived, towns across America started to wither.  Then the railroads stopped coming through.  And suddenly states like Kansas, South Dakota, North Dakota, Colorado and Montana were full of ghost towns.

In 2007, he brought back to San Francisco more 2,000 images of forgotten American buildings, and began to think about mixed media compositions – in acrylics, with photos.

“I’ve tried to capture the spirit of the era, particularly with the barns,” he said.  “They’re historical – their shape tells us where they came from.  If they’re eastern, you can see the English forbears; if they’re in Minnesota, you can see the Scandinavian influences.”

He uses his imagination on the landscape around the buildings, and experiments to see how far he can take the medium, testing his own limits.  He’s getting into dimensional work, as he pushes the boundary between realism and abstraction.

“I’m trying to determine how to show the image and not lose the essence of what it is,” he said.  “I want to see how far I can push it, and make it almost, but not quite, surreal.”

For more on Eric Engstrom, go to http://ericengstromart.com/contact.html 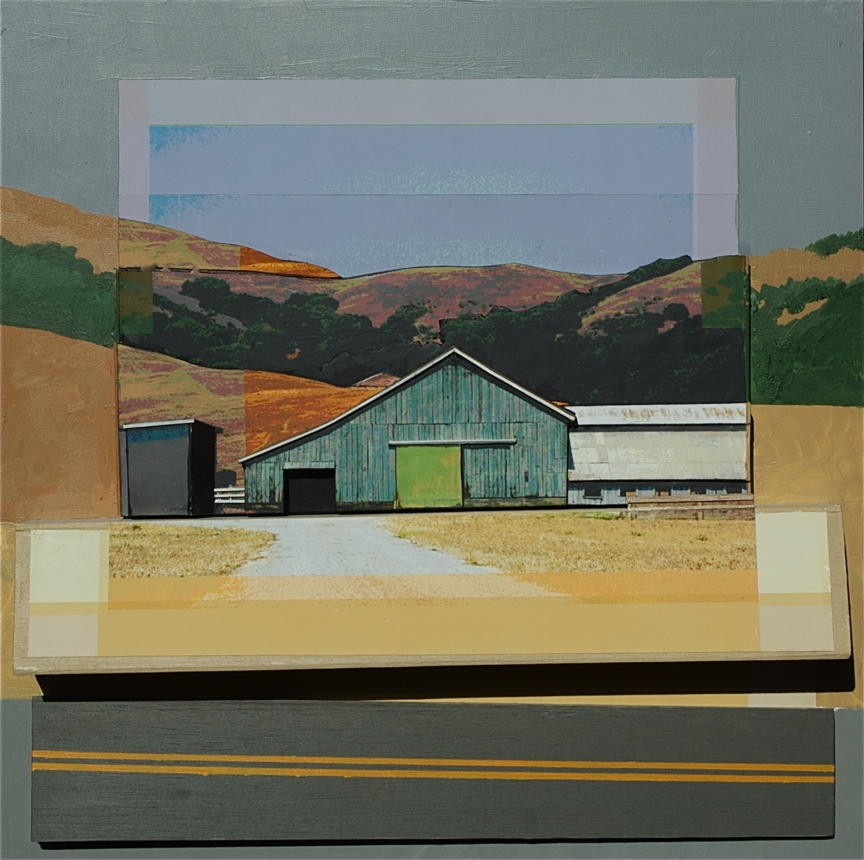 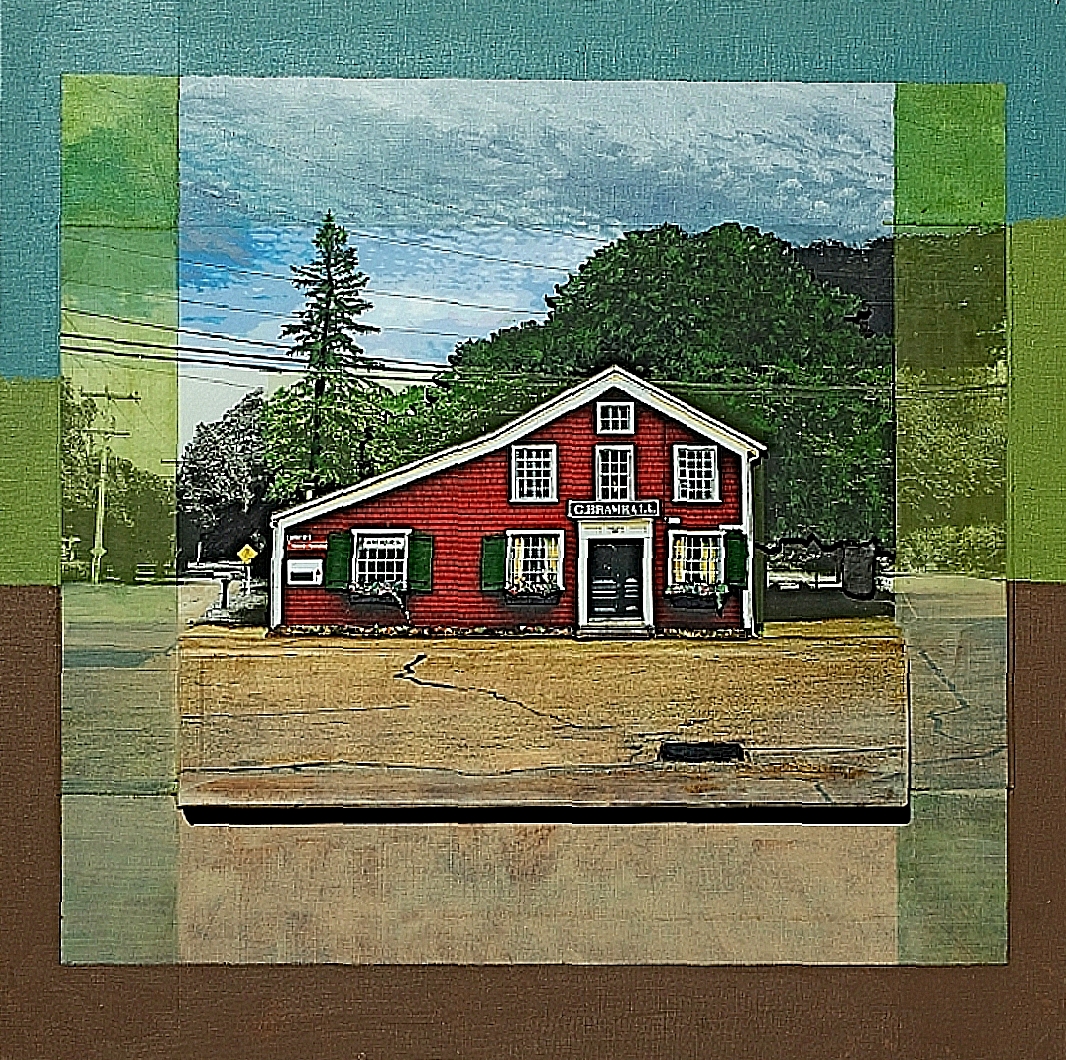 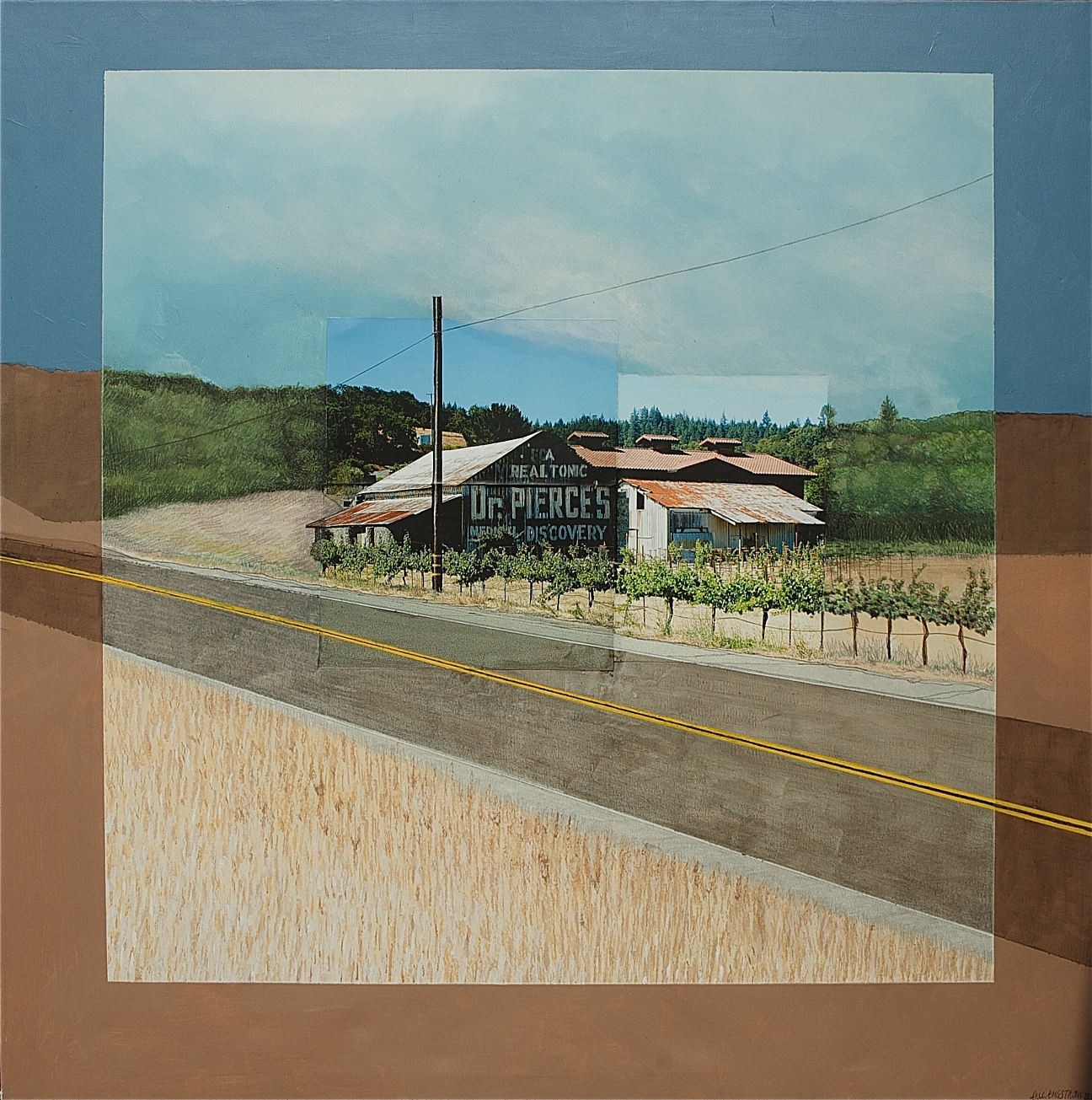 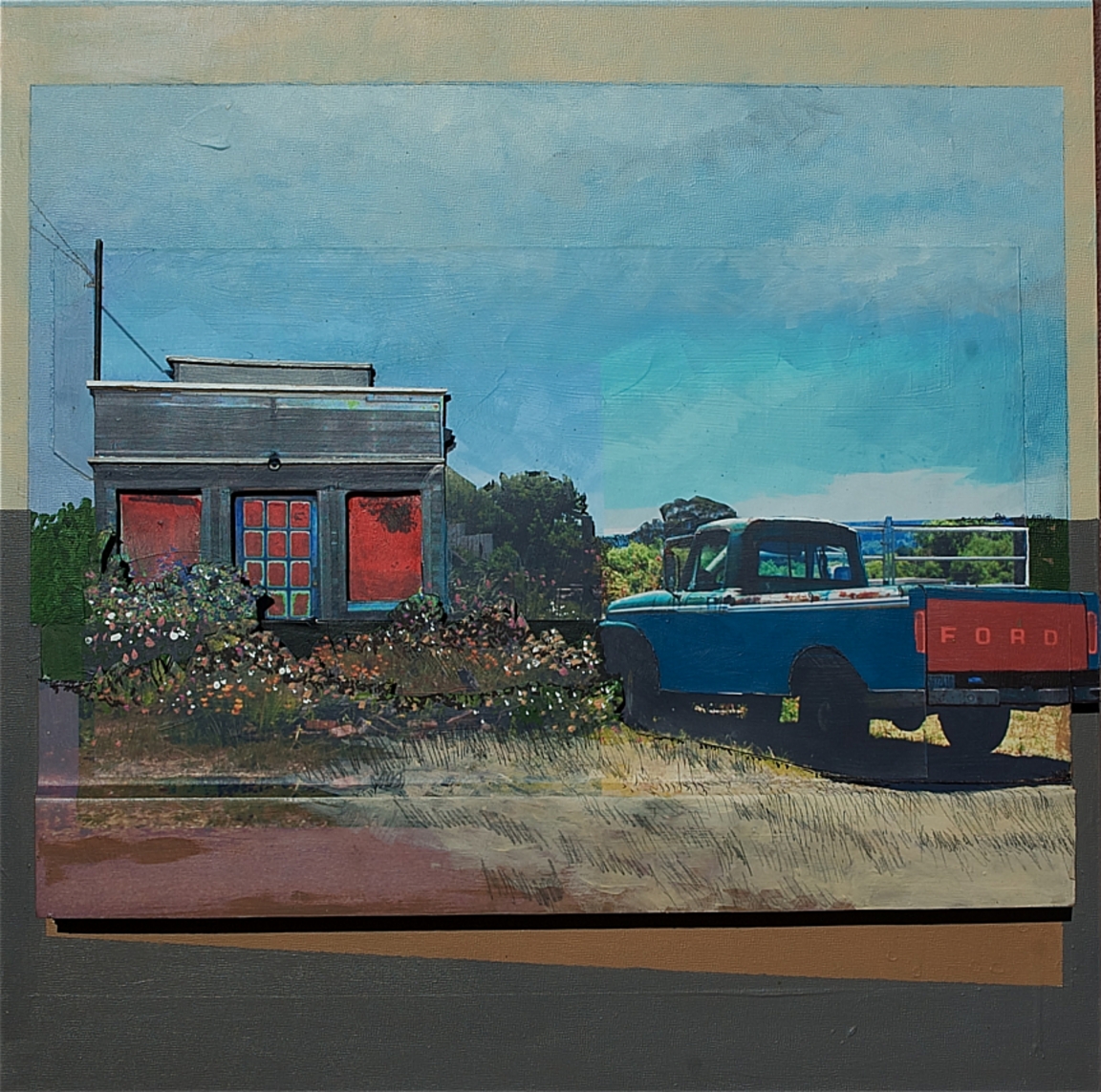 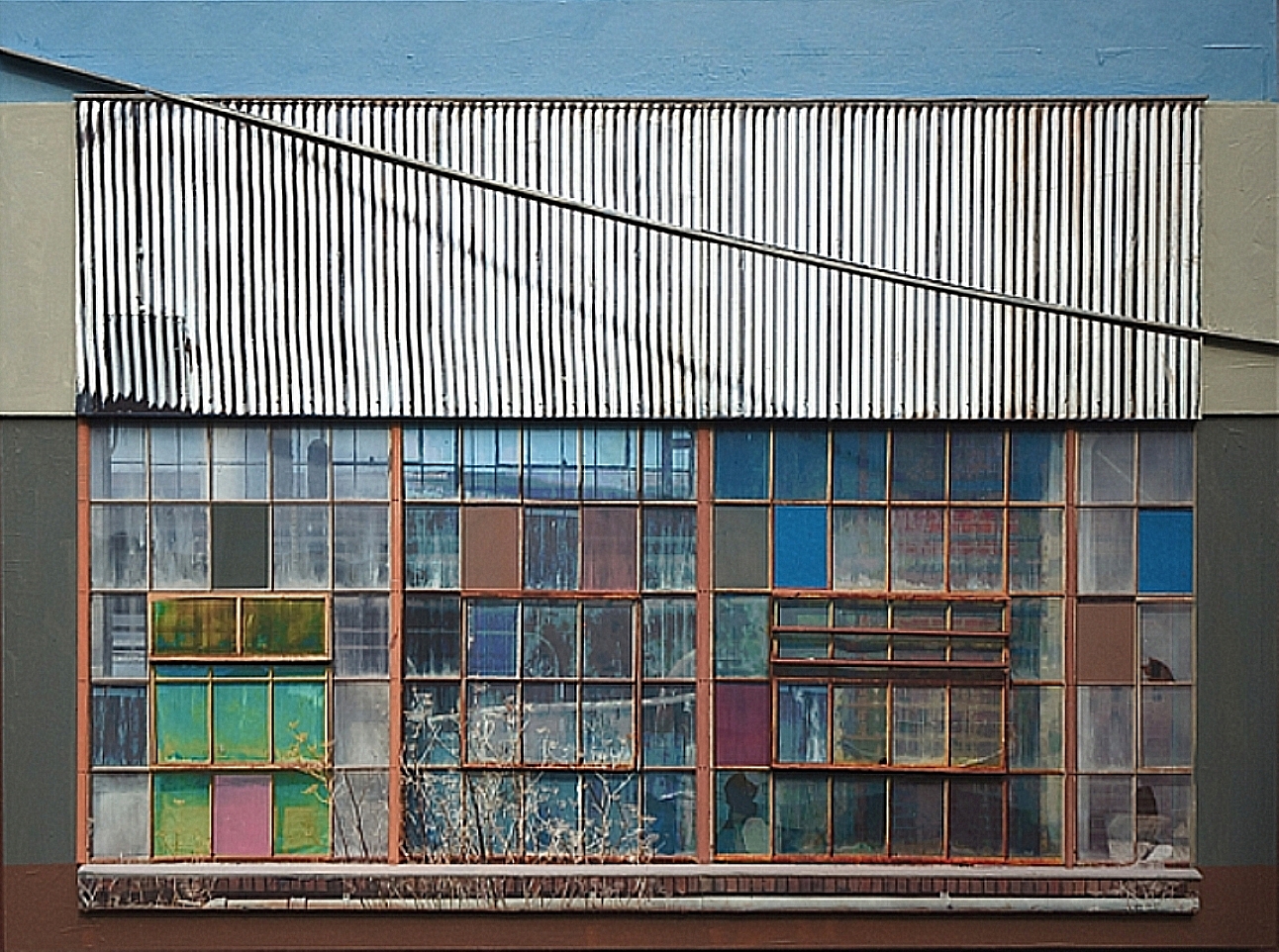 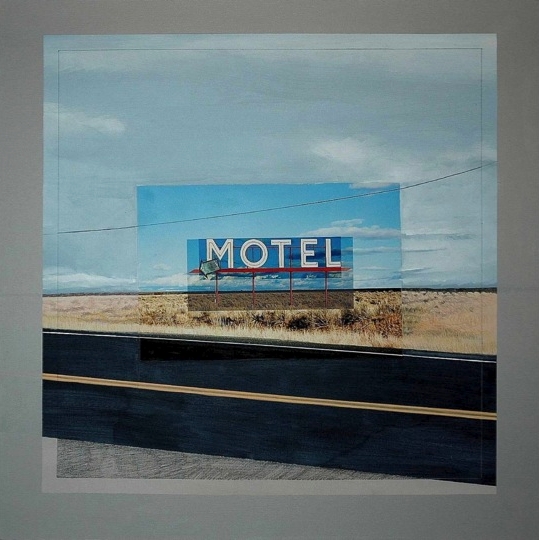 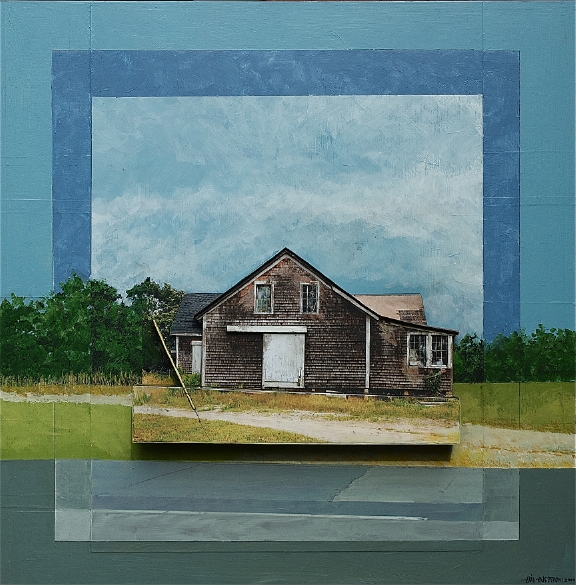 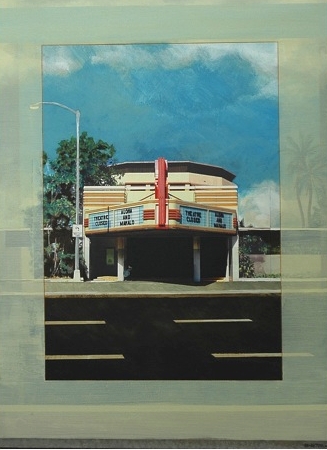 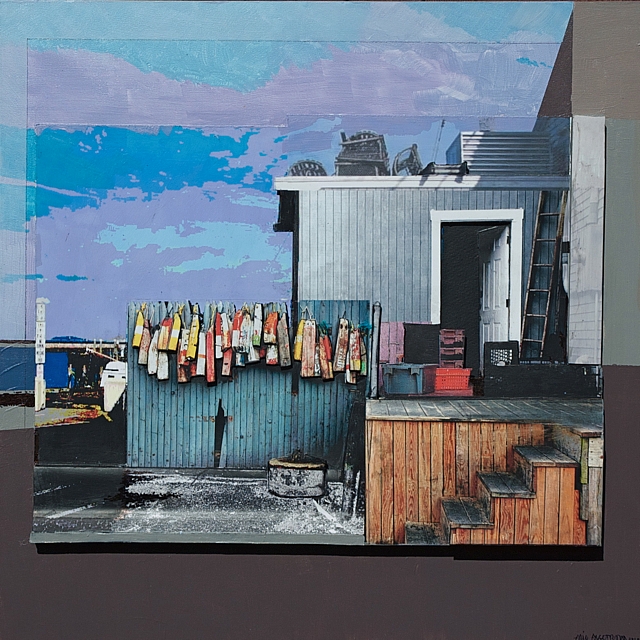 Very nice work. I would like to know more about the process.

Wonderful glimpse into Engstrom’s art. The author has ventured exactly in rhythm to the artist’s journey.

Tweets that mention Mixed Media from the Blue Highways | Architects and Artisans -- Topsy.com

[…] This post was mentioned on Twitter by JoAnn Locktov, mike welton. mike welton said: Mixed Media from the Blue Highways: Eric Engstrom is an artist who walked away from a very successful, 30-person… http://bit.ly/gZxtfB […]

About the process: I shoot buildings in landscapes and then digitally “edit” portions using the Graphic Converter program or iPhoto to isolate and recolor elements of the composition. I then print a photo-collage and paste it to a canvas or hardboard box. I begin drawing new surrounding landscape elements and over-painting portions of the manipulated photo images. In some cases where the subjects are interesting from a three-dimensional aspect, I begin building layers to add depth and relief to the images. Many of the recent pieces were created this way. Finally, I coat both the front and returns (Sides, top, bottom) with matte varnish. In some cases where I’m not happy with the results, I co back to a previous step and re-do the piece. I hope this explanation helps you to understand my process.
Eric Engstrom

With a current population of seven million that’s expected to grow by four million more in the next 20 years, the city...