The world has lost a sophisticated and articulate voice for architecture and the African American community. Phil Freelon was a kind, generous and patient man whose work transcended his own substantial talents – through eager collaboration with other professionals. Nowhere is that more evident that in Washington, D.C., where he worked with Max Bond to win a competition for the Smithsonian’s National Museum of African American History and Culture – then unselfishly stepped aside to enable David Adjaye to design the project. The idea was to get the best possible building, and their team did precisely that.

A description of their relationship was published in a June 2017 feature article in Raleigh’s Walter magazine called “Master Builder: Phil Freelon”:

“The plan was for Bond to guarantee the design, Adjaye to serve as the lead architect, and Freelon the architect of record – while the SmithGroup handled construction documents. ‘Right away, there was a sense of magic between the three of us – it clicked,’ Adjaye says. ‘There was a palpable sense that we’d struck the right balance.’”

Phil’s life’s work was bound up by a deeply held commitment to the interaction of people, places and social issues. His booming voice, gentlemanly manner and sharp insights will be sorely missed. A family friend shared his official obituary just a few minutes ago:

Philip G. Freelon, one of America’s most influential African American architects and an activist for people and communities traditionally outside the mainstream, died July 9 in Durham, North Carolina following a lengthy battle with ALS. He was 66.

As an architect and an advocate for diversity and inclusion, Phil Freelon was a change agent for his profession. A central theme of his work, and a source of his satisfaction and enjoyment, was creating spaces for everyday people. He challenged architects to see what he saw – that every person should experience beautiful and inspiring architecture not only when visiting a famous building but also in their everyday lives. The theme is realized in the libraries, parks, schools, and government buildings Freelon designed throughout the country.

Freelon was equally known for challenging the status quo, working to bring greater equity and diversity to architecture and business. Guided by the belief that diversity results in better design, better decisions, and a more dynamic practice, he worked to develop design teams of people from varied backgrounds offering a myriad of perspectives. In partnership with Perkins and Will, he established the Phil Freelon Fellowship Fund at the Harvard Graduate School of Design in 2016. The fund expands academic opportunities for African American and other underrepresented students.

“The first time I met Phil Freelon, I understood that his interests ranged beyond his successful and much-recognized architectural practice,” recalls Marvin J. Malecha, president and chief academic officer of the New School of Architecture and Design in San Diego and former dean of the College of Design at North Carolina State University. “He shared with me his commitment to act as a mentor and advocate and expressed his frustration with colleagues who seemed to stand on the sidelines rather than commit to ambitious societal goals. Throughout his career, Phil stepped up and seized the role of a leader, inspiring friends, colleagues, employees, interns, and students to aspire to become engaged and responsible citizens.”
Landmark Civic, Cultural, and Educational Spaces.

A distinct sensitivity to humanity is evident in each of Freelon’s landmark projects: The Smithsonian Institution’s National Museum of African American History and Culture in D.C., the National Center for Civil and Human Rights in Atlanta, the Harvey B. Gantt Center in Charlotte, the Museum of the African Diaspora in San Francisco, Emancipation Park in Houston, and the Mississippi Civil Rights Museum in Jackson.

He designed buildings to uplift the human spirit. With an artistic vision tied to the everyday person, he founded The Freelon Group in 1990, in Durham, NC, to bring the benefits of design to previously neglected places and to give people a sense of dignified belonging. Working in North Carolina and throughout the U.S., The Freelon Group became one of the nation’s largest African American owned architecture firms. Projects designed during this period are life science, library, and academic buildings for Historically Black Colleges and Universities including North Carolina Central University and North Carolina A&T; the Reginald F. Lewis Museum of African American History and Culture in Baltimore; and the International Civil Rights Center and Museum in Greensboro.

Learning, Teaching, Sharing
Born and raised in Philadelphia among a family of artists, educators, and inventors, Freelon developed his lifelong love for the arts and culture. Harlem Renaissance-era painter Allan Randall Freelon, Sr, his grandfather, helped ignite his awareness of the physical world and his interest in the creative expression. Classes in visual arts, design, and drafting at Philadelphia’s Central High School provided the early steps on his path towards a career in architecture.

Freelon was accepted into the architecture school at Hampton University and two years later transferred to North Carolina State University’s world-renowned College of Design. He earned a Bachelor of Environmental Design degree in Architecture with highest honors from NC State in 1975 and a Master of Architecture degree from MIT in 1977. At the age of 25, he was the youngest student to pass the Architect Registration Exam in North Carolina.

In 1978, he was appointed an Instructor at NC State’s College of Design, teaching the Architecture Design studio. Freelon was the recipient of the Loeb Fellowship at the Harvard University Graduate School of Design, where he completed a year of independent study in 1989. He received an honorary Doctor of Humane Letters degree from Duke University and honorary degrees from NC State University and the Massachusetts College of Art and Design.

Teaching remained a staple throughout his career, a calling he loved. He frequently traveled to universities across the country as a visiting lecturer. For more than a decade, Freelon served as a Professor of the Practice at MIT, flying each week from North Carolina to Cambridge to convey a practical, real-world learning experience to design students.

As a mentor, he encouraged young designers and other professionals to aim high and break through established barriers. “Phil invested his time in me, helping me see my value and challenging me to unlock my ability,” states Edwin Harris, a co-founder of EVOKE Studio Architecture who worked with Freelon at Perkins and Will and The Freelon Group for nine years. “As an African American architect, he taught me to expect and to produce nothing short of excellence in design. I am proud to be a part of Phil’s legacy as a designer, architect, friend, and most importantly—mentor.”

While his designs will continue to shape the way people experience many cities, neighborhoods, and spaces, his legacy extends to significant efforts in promoting access and inclusivity in the arts, encouraging diversity in architecture, and supporting the search for a cure to ALS, also known as Lou Gehrig’s Disease. After his ALS diagnosis in 2016, Freelon’s empathy for others continued to define him. In partnership with his wife, Nnenna, he established the Freelon ALS Fund to support research and treatment of the disease, and to support ALS patients and their families.

Honors and Recognition
Working in an industry where African Americans comprise only two percent of registered architects, Freelon brought a much-needed perspective to the built environment—one that moves culture forward by allowing for a broader insight into the American story and experience.

Photography was essential to Freelon’s design vision and creative process. His photographs explore the structure that exists all around us, both in the natural and built environment. Celebrated in gallery exhibitions since 1990, Freelon’s photography will be showcased in upcoming solo shows at Cameron Gallery in Wilmington North Carolina, Craven Gallery in Durham, and the University of Houston’s School of Architecture.

Celebration of Life Service
To gather together and honor Phil, relatives and friends are invited to attend a Celebration of Life at 3:30 P.M. on Saturday, September 28 at the Durham County Human Services Complex, 414 E Main Street in Durham. In lieu of flowers, donations can be made to Northstar Church of the Arts, a non-profit art and culture center, founded by Nnenna and Phil Freelon and providing a sacred space for healing, creative expression, and spiritual connectivity. The website is www.northstardurham.com

Having been an admirer of the artistry of Nneena Freelon, it was an added pleasure and honor to meet and learn about her partner and inspiration Philip Freelon. I had the opportunity to meet and witness the love as he championed his wife at many concerts and the beautiful testimonials of his life when our local newspaper named him their Tar Heel of the Year.The beautiful picture of the two of them saying goodbye at the RDU airport accompanying that article will occupy my mind always. I last spied him at the wonderful gathering for the start of the Freelon ALS Fund. It was a happy evening, with the wonderful family sharing themselves and their love for their Patriarch and Warrior. Thank you Master Architect, and truly phenomenal Human Being. We are all the better for your brief, but meaningful time and contribution among us. A life well done.

I was one of the instructors in the initial ‘design camp’ summer studios at the N.C.S.U School of Design in +/- 1984. The students were high school juniors and seniors who had visions of a future in the design profession. Toward the end of the 2-week session, we scheduled a field trip for the design campers to observe the American Airlines terminal at RDU, then under construction. Phil Freelon, the designer of the terminal, offered to give the campers a ‘hard-hat’ tour. I chaperoned the students to the terminal construction site, where we all donned hard-hats and reflective vests. The campers had a high time, mugging in their construction-worker garb and poking fun at each other. Phil appeared from behind a forklift and was introduced to the campers. He gave a brief overview of the project, and then guided the campers on a modest tour of the soon-to-be-opened facility. He was like the Pied Piper, animated and energetic, interpreting what the campers were seeing and explaining the transition from in-progress construction to completed facility. He held the campers attention for a full 40 minutes, answering every question and thanking the campers for their interest in his project. By the culmination of our visit it was clear to me that one of Phil’s great gifts was his ability to communicate his ideas, his thoughts, and his vision; be it in the board room or before a group of would-be designers. 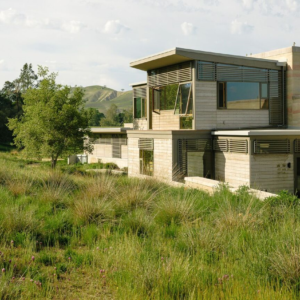 On a 500-acre site running along the San Andreas Fault, San Francisco-based Feldman Architecture has created a family retreat...