In 1987, as fashion designer Karen Thompson was restoring her home, she taught herself the ancient craft of mosaics. It became her career, as she replaced fabric and buttons with ceramic and glass. Working with a vast range of materials Thompson has developed a specialty in custom mosaic installations for both interiors and exteriors.

A commission to create two intricate wall panels depicting flower-filled urns inspired the idea for a series of botanical panels. “I needed a unifying template for the panels and I liked the idea of using a traditional illustrated manuscript page,” she says. “This format allowed me to have a central main species surrounded by smaller flowers, insects and fanciful patterns.”

Fascinated by the world of flora and fauna, she’s built an extensive library, which enables her to research the details of botanical, entomological and ornithological species. Her volumes of reproduced florilegia and historical botanical illustration have inspired both realistic and fanciful interpretations of petals and leaves.

“I tend to favor illustrations over photographs for my research and inspiration. Illustrators articulate and simplify the specific components of their subject and I find this helpful in making decisions about the shapes of my tessera,” she says.

She’ll create the featured species in a material divergent from the recessive background, which enables her to emphasize color and texture. Each flower’s Latin name is heralded on a flowing banner and minute drolleries flutter around the central plant. Using a bevy of luxurious materials Thompson replicates the natural world with nature’s own treasures: semi-precious gems, fossils, glass, marble and onyx.

An interior designer commissioned her to create custom inserts for a new residence in Napa, California. After researching the local flora, Thompson created mosaics for five niches featuring native species. A vine or branch trails along the top of each arch and a delicate winged insect hovers near each iris, lily, clarkia, delphinium, and blazing star. A random-cut Israeli stone, which had been specified in another area of the home, became unifying background field tile. “The clients were very pleased with the mosaics and had the original lamp shades on the light fixtures replaced with smaller ones to expose more of the mosaics,” she says.

It was a natural evolution that brought Thompson from her botanical series to a parade of vivid insect tiles. With a silky black background of honed marble, the bugs are elegant and bold, their true neon colors reflecting Thompson’s epiphany that “the colors in the insects are indeed fairly representational to those naturally occurring. There are amazing and outrageous colors found in nature!”  The tiles are one inch thick and designed to be displayed individually or as a group.

What’s next for Thompson? Her library of ornithology books has increased lately, and we know that could only mean one thing: new bird panels will soon take flight.

For more on Karen Thompson (like the angels in the slideshow below), go to http://www.archetile.com/

For more by JoAnn Locktov, go to http://www.bellafiguracommunications.com/ 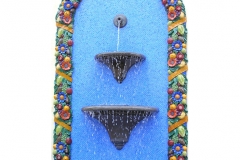 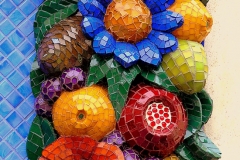 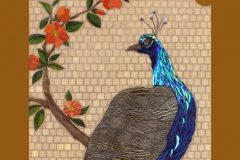 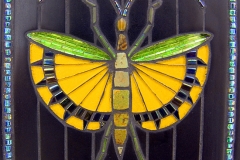 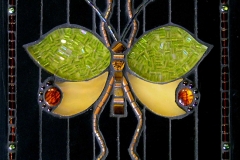 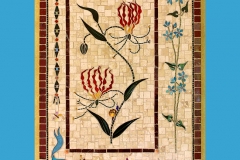 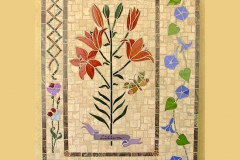 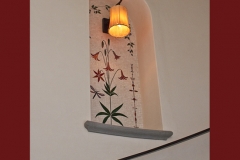 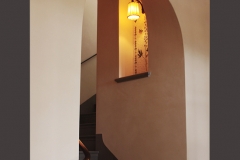 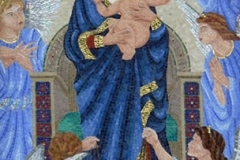 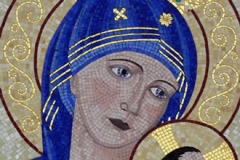 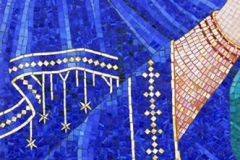 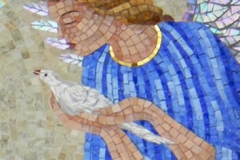 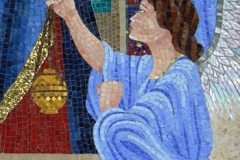 Wonderful interpretations of the flora and fauna in these mosaics by Karen Thompson. Wonderful work indeed.

I am searching for a Karen Jane Thompson for the 40th class reunion of First Colonial High Sch in Va.. We have a FB page First Colonial class of 76… Could you pass this info on to Karen hoping she maybe the one.. Mark