In Victoria, Balance at Dockside Green

On what was not long ago a brownfield in Victoria, B.C. – a bare piece of waterfront property and an unintended 19th-century landfill – a LEED-certified platinum complex of two mixed-use towers now celebrates an integrated approach to living with land and water.

It’s called Dockside Green, and it’s been designed by a number of teams in the Perkins + Will’s Vancouver and Victoria offices.  It’s the firm’s 100th LEED-certified building.

“We’re on a leading edge,” said Robert Drew, associate principal in charge of the project.  “The growth of green buildings has been exponential for us – we had a slow start, but we’ve taken off.”

It’s a development that’s socially, as well as environmentally, sensitive.   Twenty-six of its units are priced well below the market rate, at $30-$60,000 Canadian.   “They’re targeted at Canadians with low-income jobs,” he said.  “The owners may sell at a reduced rate, but they’re still entitled to the equity.”

Its green features are mostly water- and energy-related, including energy-efficient fixtures like low flow faucets and Energy Star appliances.  Drew also called for fan-coil ceiling units, instead of baseboard, to introduce fresh air from outside – whether heated or tempered – into the units.  Open windows provide cooling in the summer. Three wind turbines atop a commercial complex provide auxiliary energy, and heat comes from a bio-mass plant on site.

“The bio-mass plant by Nexterra is the real jewel in the crown,” he said. “It’s burning wood waste – a truckload a week – to generate heat and hot water.  “It burns at such a high heat that there’s no carbon released at all.  It delivers heat to a neighboring hotel as well.”

One little-known – and surprising – fact about Victoria is that the city dumps its raw sewage directly into the Juan de Fuca Strait.  But at Dockside Green, Perkins + Will has installed a wastewater treatment facility to handle all water on site.  “We bring potable water in, it’s used, and then it goes to treatment, and back to toilets.  It’s then treated and goes back to the greenway.”

The greenway is a public amenity that functions also as part of a stormwater management system.  Water drains down from the parking lot, is treated and then circulates to the greenway, where indigenous plants have been introduced.  It’s lined with garden suites on either side, with just enough landscape to feel private.

But the real benefit at Dockside Green is that water is constantly engaged in a cycle of use, treatment and re-use.  “It’s not often that it goes out to the harbor,” Drew said.  “But when it does, it’s treated to Canada’s highest standards.”

All that, and a site blessed by nature too.  “The views are important,” he said.  “There’s the inner harbor of Victoria Harbor and we’re close to downtown, so we’ve accentuated that with quite a bit of glass.”

For more on Dockside Green, go to http://docksidegreen.com/index.php?option=com_frontpage&Itemid=1

For more on Perkins + Will, go to http://www.perkinswill.com/work/dockside-green.html 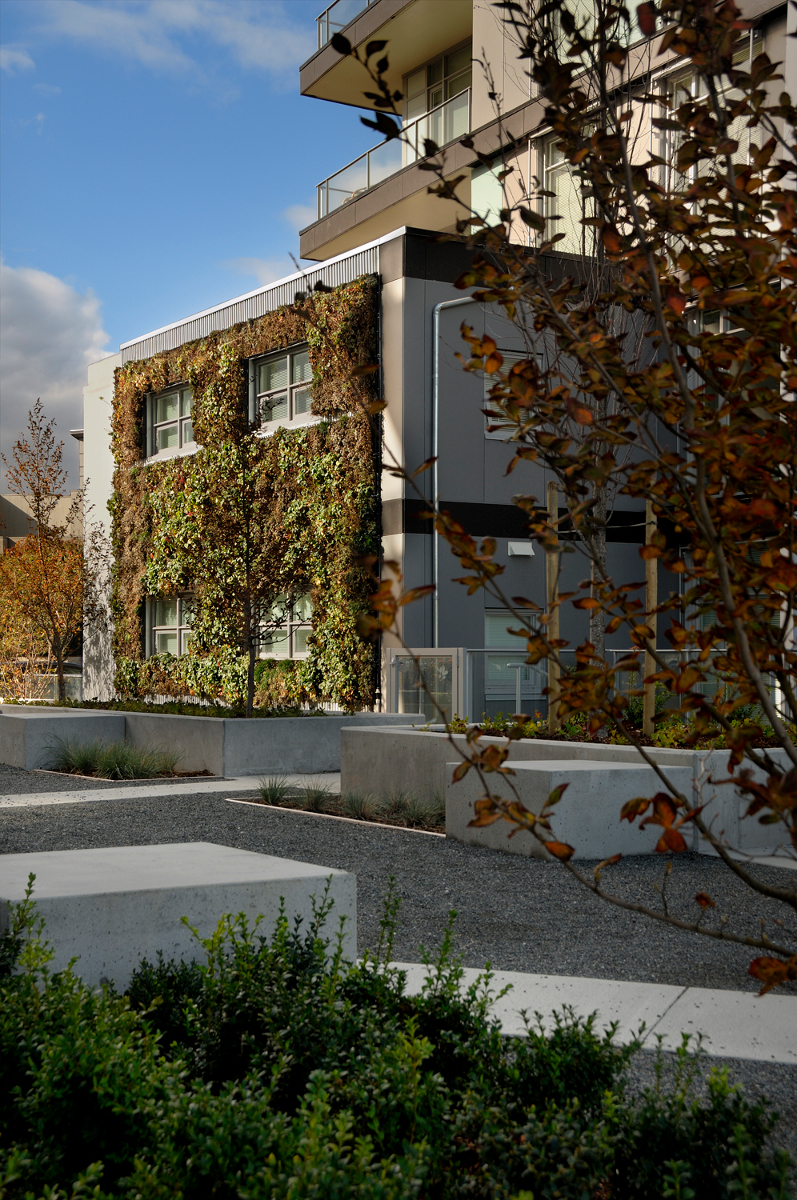 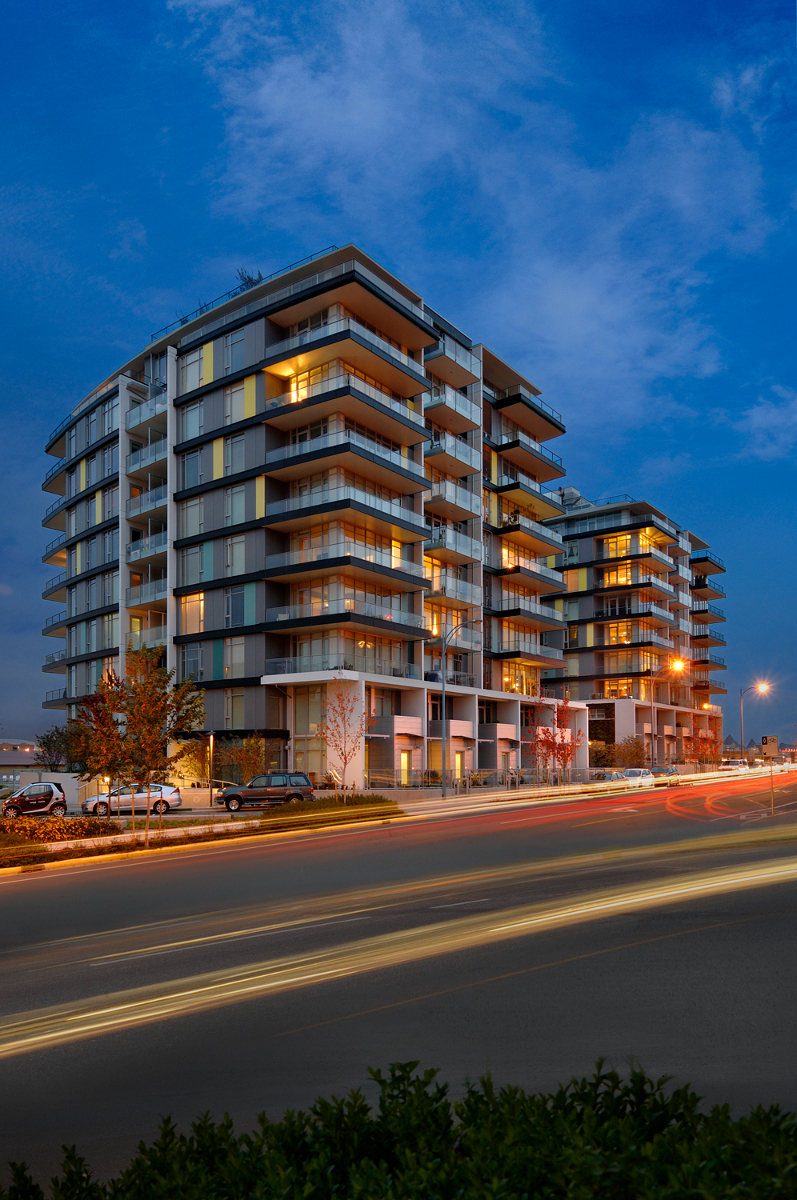 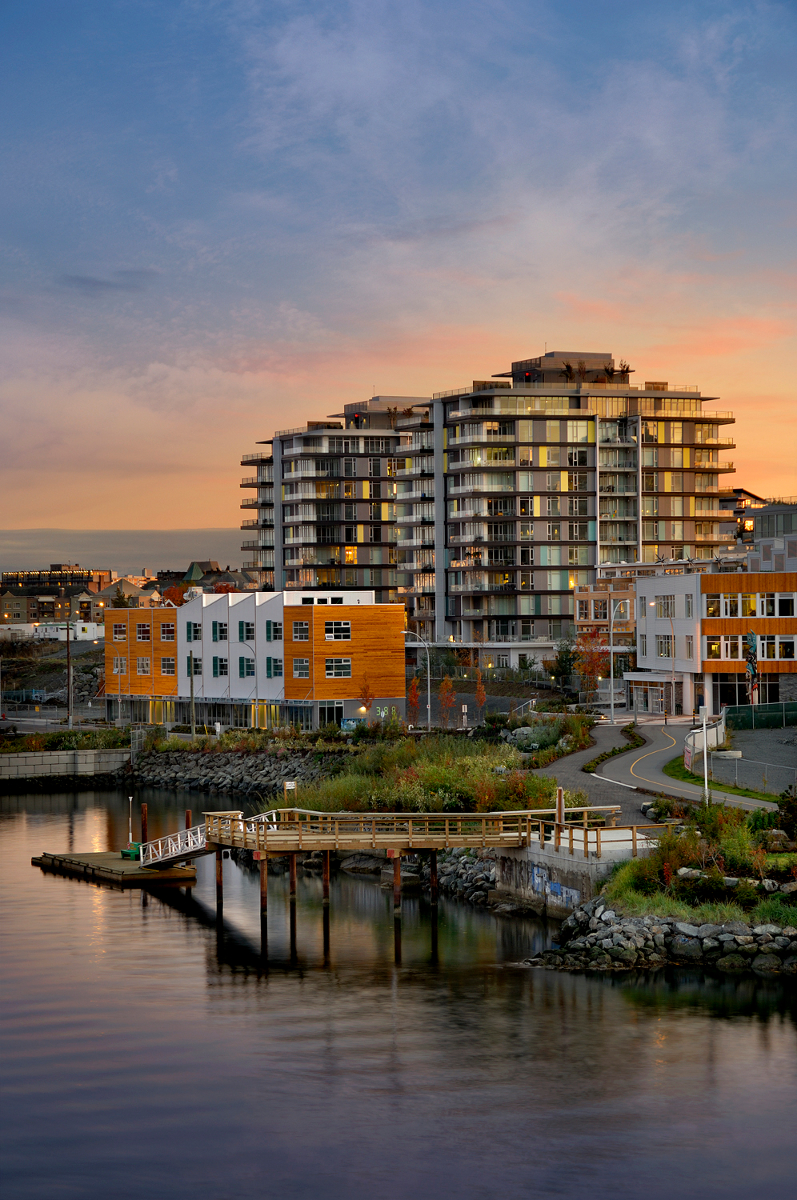 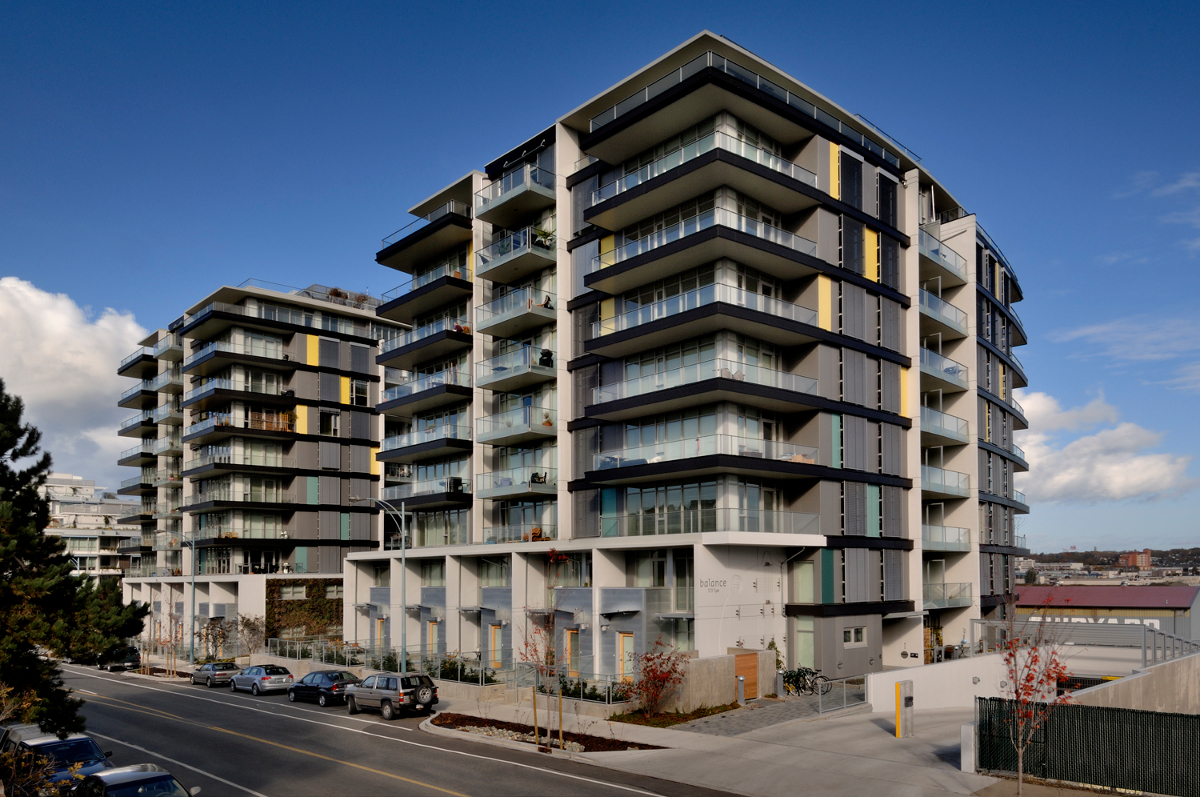 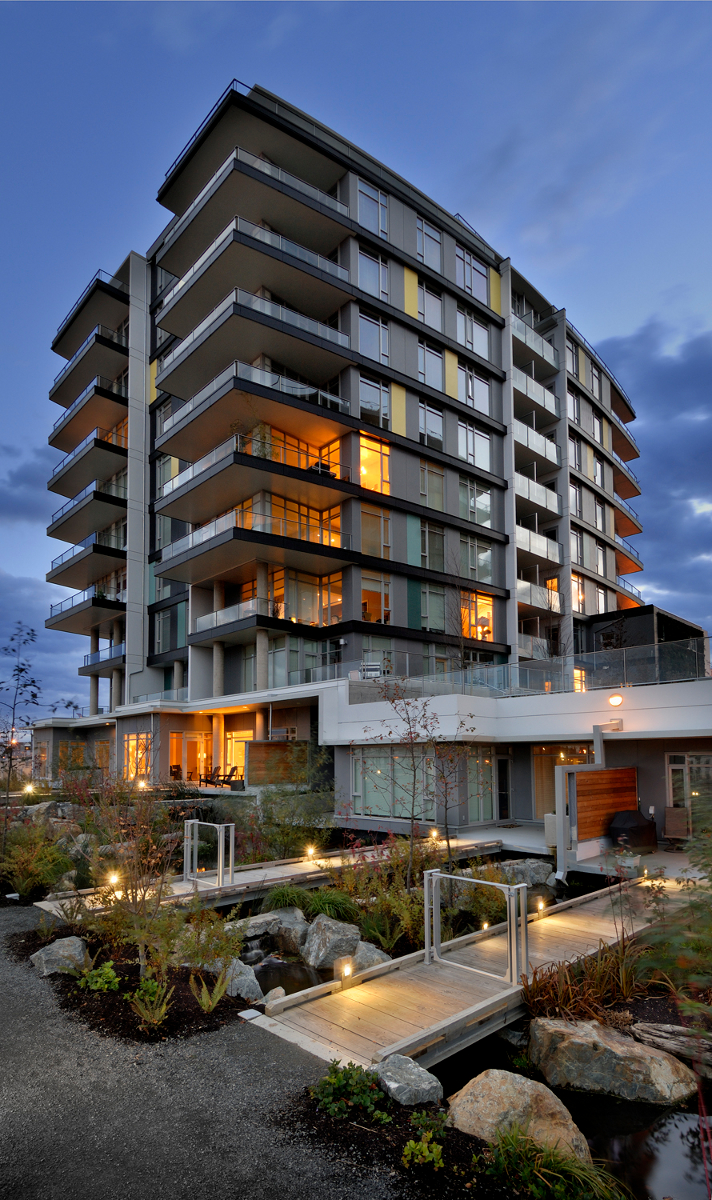 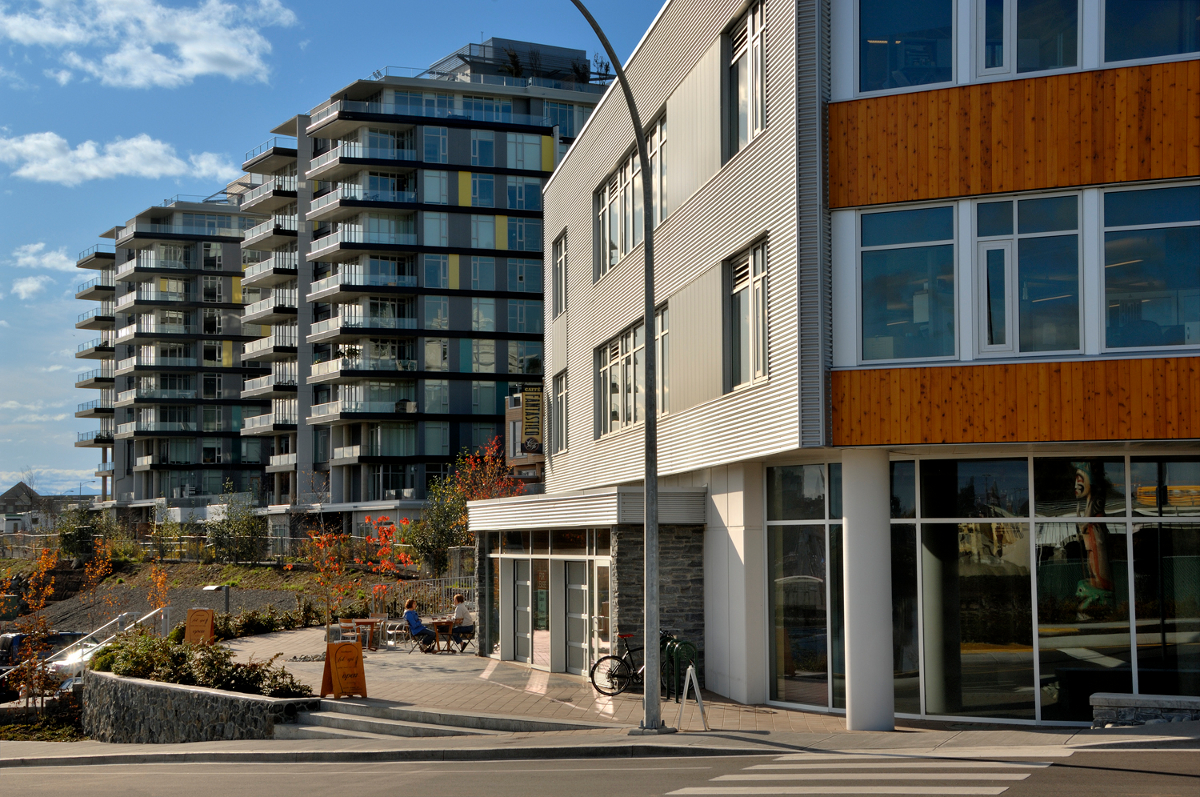 The family of the late Eduardo Catalano has created a $1 million scholarship fund for North Carolina State University’s...