Let’s say you’re a hotelier in Antakya, Turkey, drilling down on a site for a new project – and discover antiquities from 300 B.C. and a huge expanse of intact Roman mosaics.

What do you do?

“Usually when something like this is found, it’s covered up and nobody knows anything about the remnants there,” says Ozge Ertoptamis of EAA Architects.

But not this time. The hotelier called EAA, and with them worked out a solution for all involved. “We came up with a way of designing on top of this amazing site,” she says. “Our idea to realize this project was to build directly over the ruins and go through the authorities and the approval processes with the minister of culture.”

Turkish craftsmen dug and drilled by hand 22 meters down, to set pilings of steel filled with concrete, carefully sited among the artifacts. Now there’s an open-air museum, open to the public on the lowest level, with the hotel atop.

Each hotel room is a module crafted out of stone off site, then inserted into a grid rising up above the archeological site.

The exterior is clad in metal, so the materials are basically steel for pilings, concrete, metal, glass, and local stone that blends into the mountains that surround the town once known as Antioch.

The entire experience is a one-of-a-kind event for the public and guests at the hotel.

“The way you relate to the archeological remnants as you go around is an intense experience,” she says. “You go through a museum path a little lower than ground level and on a separate path, and then you can go to the lobby level and elevator shafts take you to room levels.”

Surely, it’s the best of both worlds – from ancient Rome to modern Turkey. 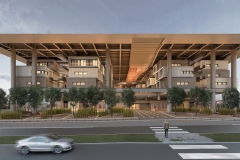 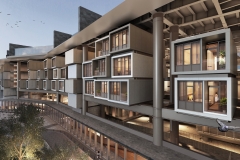 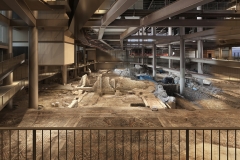 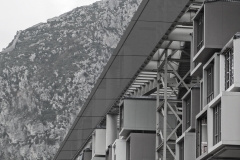 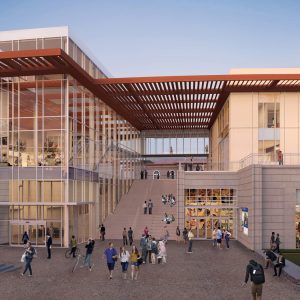 A new student life center by Duda/Paine Architects is now the beating heart of the Emory University campus in Atlanta. It’s...