This one’s all about the veil.

It’s in Riyadh, Saudi Arabia. It’s the largest women’s college ever built all at once. And it’s 32 million square feet, sited in the desert halfway between the city and the airport.

Its 10 million square foot academic spine was designed by a five-office team led by Perkins+Will’s Pat Bosch, in collaboration with local architects of record Dar Al-Handasah.

And because its administrators and faculty are women, veils are unnecessary in the school’s inner sanctum.

Bosch’s design is a metaphor for that.

“It’s about creating layered buildings, veiled buildings – the layering allowed a little less veiling as you go into it,” she says. “It’s about transforming layers and screens into a contemporary architecture, and exploring indoor and outdoor for a richer fabric of spaces and buildings.”

Its materials are reinforced and precast concrete with steel, plus wood and stone where the architects sought to explore native materials. “There’s a kind of limestone in two shades of yellow and gold, the same stone used in older forts in the center of the city,” she says. “There are also bricks that are locally produced in a golden hue. We used that metaphorically as portals to the campus, with huge pillars that frame the entry.”

She found her inspiration in the veiled women of Saudi Arabia, taking care to design a high-performance building that will stand the test of time.

“They’re women who are very strong, who are framed in tradition and physically veiled – but they have a global mindset, and they’re true leaders of their professions and disciplines,” she says. “It’s a building that’s a reflection of them.”

Outside, it’s clad in monochromatic white and gold, but inside it’s vibrant and colorful, much like the women when they’re unveiled.

In meetings with her clients – the king of Saudi Arabia and his minister of education – Bosch didn’t hesitate to conform to tradition.

“When I’m there, I wear a veil out of respect,” she says. “But I don’t have to cover my face completely.”

But then again, she likes black anyway. 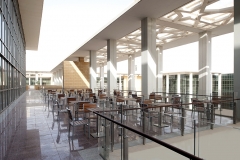 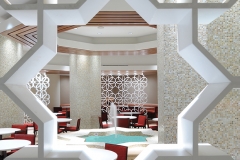 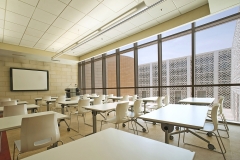 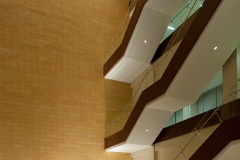 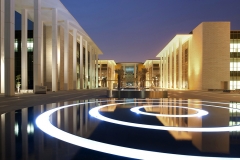 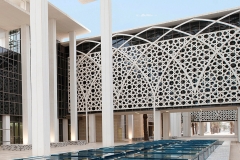 Three American-based women, co-curators of the U.S. Pavilion at the Venice Biennale, are currently engaged in an intense...