With a current population of seven million that’s expected to grow by four million more in the next 20 years, the city of Hanoi is rapidly expanding.

The central core of the capital city is developmentally restricted, much like Washington, D.C.  Expansion that began in a ring around the city in the 1980s is now in full swing.  In between that ring and a third lies a lush, green corridor teeming with wildlife along river’s edge.  Six thousand people live and farm in two villages there.

Soon though, they’ll be joined by 14,000 more, as the area is transformed from an economy based on agriculture to one based on knowledge.  The villages will remain – to be incorporated into a master plan for mixed use development by Skidmore Owings & Merrill (SOM).  The firm won the commission for the work just last week, after successfully developing a similar plan at Pho My Hung 15 years ago.

“Viet Nam has changed – it’s nothing like what you see in the movies,” said Dan Ringelstein, director of urban design and planning at SOM’s London offices.  “It’s got a bustling, cosmopolitan young population made up of very smart and ambitious people.”

To accommodate them on the edge of the city, SOM proposes everything from high-rise apartment buildings as tall as 70 stories to upscale villas in gated communities, with low-rise, European-style structures four to six stories in between that will mitigate the scale of the two.

“There’s a typology there that’s called the shop house,” he said.  “It’s three or four or five stories tall, with a shop, a restaurant, a hotel or a small business at the ground level, and people living above.  They’re really exciting to walk through, with all these places to eat, to get your motorcycle fixed or your insurance policy written.”

The master plan takes advantage of Hanoi’s natural, if flat, river basin topography.  The site’s framework of canals, once connected for harvesting rice, then disconnected and reconnected once again, has been integrated into the SOM overall design.

“We used it as an inspiration for the layout,” Dan said.  “The green of the rice fields and the network of canals make the plan specific to the site and the region we’re working in.  We’re playing up the lush landscape at the canal park, which is organic and vegetal.  There’s a harder edge where people get closer to the water.”

The plan enlivens the strategic green landscape corridor along the river and applies state-of-the-art technology in carbon emissions reduction, energy needs reduction and smart infrastructure.  A complete urban living environment will emerge on site, including schools, healthcare clinics and a civic center.

“Some people will continue farming,” he said.  “But more probably will switch to more service- or knowledge-based jobs.  It’s part of a government initiative to move away from an agriculture-based economy.”

For more on SOM in Hanoi, go to http://www.som.com/content.cfm/012011_som_awarded_commission_for_green_tech_city 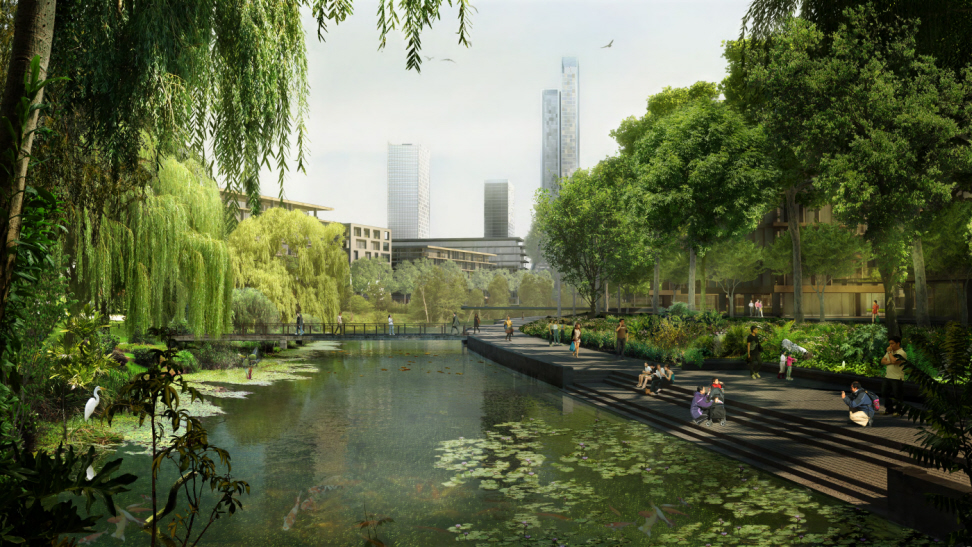 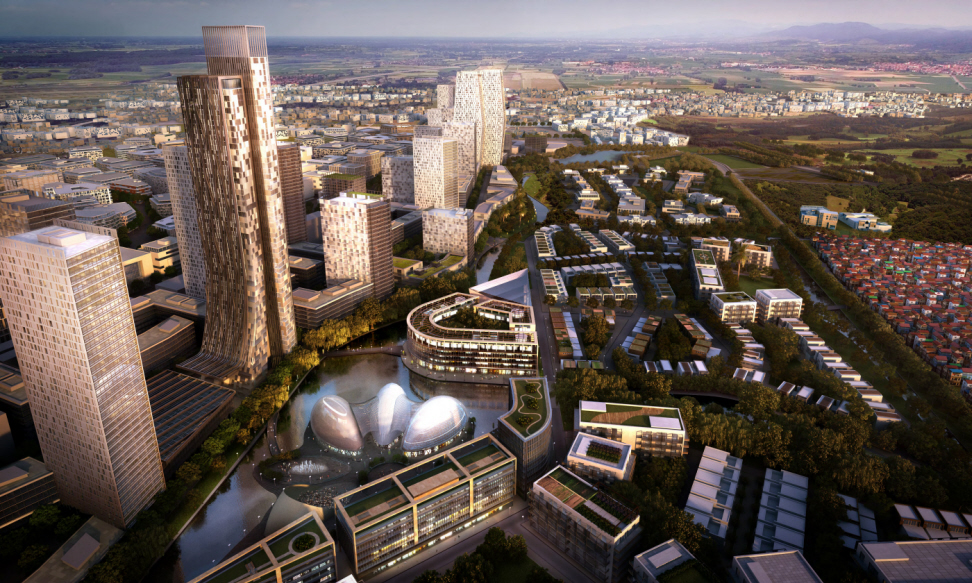 […] an interesting article about the future development and urban planning of Hanoi, which is set to grow by four million […]

In Hanoi, a Green Master Plan by SOM | Krisi Patras

In Hanoi, a Green Master Plan by SOM | Elements of the apparatus

[…] In Hanoi, a Green Master Plan by SOM Share this:TwitterFacebookLike this:LikeBe the first to like this post. This entry was posted in Uncategorized by Krisi Patras. Bookmark the permalink. […]

Only in Manhattan could an exhibit like this one find a happy home. Niche player Larry Shar, second-generation owner of the Julius...