In Georgia, Functional Art For the Bath

As an art student at the University of Georgia, Russell Adams studied sculpture and jewelry-making.

At the time, he probably didn’t anticipate the eventual arc of his career.

But right out of school, he found himself selling bathtubs for a Sugar Hill, Ga. company called MTI. Before he knew it, he was buying out its owner. And now as president and chief designer, he’s transforming its product line.

“I realized we had really good construction methods, but not much design savvy – the products were kind of vanilla and ‘me too,’” he says. “But we had a team that was very good, and I worked with some architects to come up with designs that would appeal to different properties.”

Today, the 155 workers MTI, most of them its new owners, create bath tubs out of acrylics and engineered solid stone,  each of them to die for. Their primary clientele are hotels, condominiums and custom homes, mostly in the upper-end, luxury markets.

“We’re trying to achieve art for your bath, with freestanding bathtubs that have been the trend for last few years,” he says. “People may not use it every day, but we make it as beautiful to look at as it is to use.”

The company’s newest model, the oval-shaped Parisian® is just such a sculpture. “It’s got clean lines, but it evokes a feeling of the past,” he says. “A local interior designer pushed me to come up with it.”

Offered in white only, its look is old-world, traditional and porcelain, but in fact it’s made of a modern acrylic that’s been thermo-formed in two pieces, then shaped into a sculpted, seamless finish.

“It looks like it was made a long time ago, but it holds up well,” he says. “You can do hydrotherapy with it, and put radian heat in it to warm it up.”

It’s offered in a five-and-a-half-foot and six foot-long model, each three feet tall and capable of holding 80 to 90 gallons of water, if filled to the rim. Forty gallons is the norm, though, Adams says.

But then again, not everyone can appreciate a functional work of art. 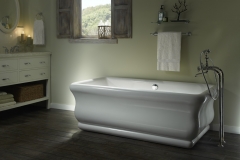 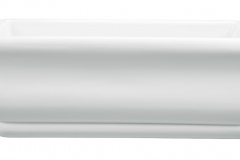 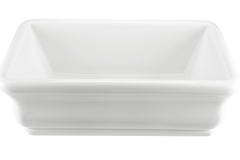 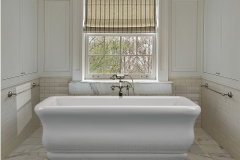 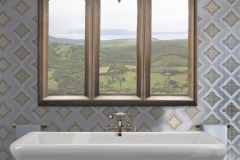 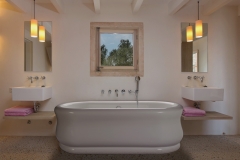 Floating sinks on each side of freestanding bathtub 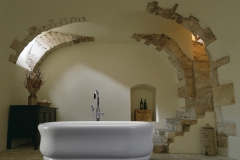 Wine storage in alcoves in cellar with stone floor and steps 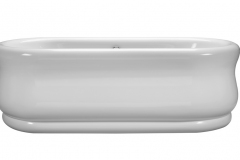 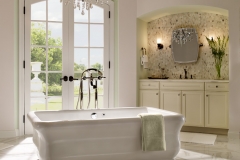 In Los Angeles, Luxury at the Carlyle

Dan Gottlieb's  newest series of images – actually a combination of photography, painting and cabinet-making – are rich,...