For Labor Day this year, I searched the A+A archives for posts addressing the issue of labor. The most striking and meaningful one popped up from July, 2019. That’s when, during a stop for lunch in Charlottesville, I came across a construction site for Höweler + Yoon’s Memorial to Enslaved Laborers. Three years later, the memorial is a reality – and worth a visit to the University of Virginia Grounds:

It was a surprise, all right – one that stopped this writer cold on the hot afternoon of Friday, July 5.

I was seated at a sidewalk table at The Virginian on The Corner in Charlottesville, Va., across from the University. When I looked up and across the street to see Jefferson’s one-brick-wide, serpentine wall, I found my view blocked.

By a chain-link fence. In the most prominent and public of spaces. And covered in renderings of a new memorial now under construction.

It will be a monument to honor the memory of enslaved laborers who worked mightily for decades to execute Jefferson’s vision for his Academical Village.

The project got started back in June 2017, fully two months before that violent spasm of ugly events on the Lawn of the University and in the streets of Charlottesville.

To the University’s credit, its planning already was well underway. “Those rallies took place in August, so we were very fortunate, timing-wise,” says Architect of the University Alice Raucher. “What to do with the Confederate statues was a conversation that was going on concurrently with our discussion about the memorial.”

Steward for the project is Landscape Architect of the University Mary Hughes. She’s already dramatically altered the lay of the land there for the better, with projects like Warren Byrd’s outstanding work at The Dell. This memorial, though, is about more than daylighting a creek, creating a pond and cleaning up its water. This project is laden with long-overdue acknowledgements and tributes for an overlooked people.

“It’s a place that can be occupied as a ritual of remembrance,” Hughes says. “Its formal inspiration was the broken shackle – that’s why there’s an open end – it’s the break of a shackle.”

It can be used for classes and performances. But it’s also a very public link to the citizens of Charlottesville and Albemarle County. Their concerns were a pivotal part of research that went into the project and its location.

It’s sited along a path that’s fraught with meaning for the local community. “Access to it is part of a ritual walk on Liberation Day on March 3 – a walk that connects the University Chapel with an auction block at the courthouse,” she says. “This memorial along that walk becomes part of that ritual.”

March 3 marks the day that slaves were freed in Charlottesville.

When it’s dedicated on April 11, 2020, the memorial will be highly visible from automobile or public transit – a monument that connects citizens to the University – and vice versa.

That’s something worth building upon in Charlottesville.

On Wednesday: How architects Höweler + Yoon approached and won the project. 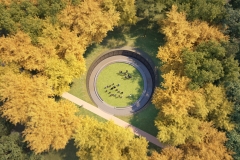 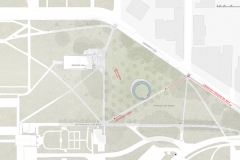 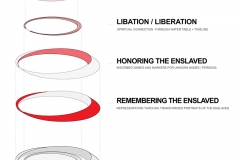 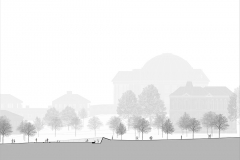 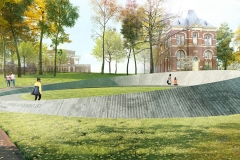 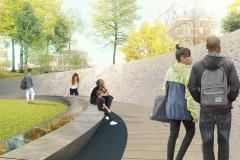 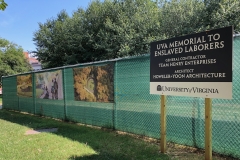 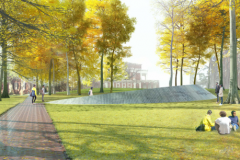 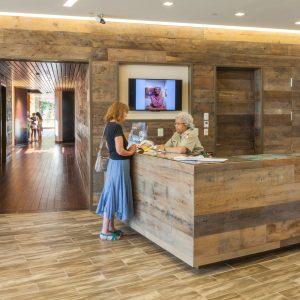 To give voice to Black architects, designers, and artists, the National Building Museum is bringing in a rockstar lineup...