In Charlotte, ‘Refuge’ Hotel Brings a Community Together

For years now, I’ve been writing about the work of designer Alicia Hylton-Daniel in local and national publications. The Durham, N.C.-based designer has a eye for blending color, details, and materials in ways that are unmatched anywhere. She and her husband own a design/build firm that’s taken the Research Triangle region of North Carolina by storm, with a strong embrace of adaptive re-use and urban infill. Now she’s branched out to Charlotte, where she teamed up with three Indian-Americans (and a Raleigh architect) to create a boutique hotel that reflects the diversity of its community. I covered it online for Metropolis magazine a couple of months back, and today it’s running again here:

On one hand, “Refuge” is a five-room laboratory for 21st-century guests—a means to discover their likes and dislikes in an era of rapidly changing hospitality trends.

On the other, it’s a consciousness-raiser. Its owners—second-generation Indian Americans whose parents immigrated here in 1981— want to bring non-white culture out into the open through their hotel’s aesthetics. For that, they hired interior designer Alicia Hylton-Daniel, a Jamaican native living in Durham.

“We wanted to execute elements of her Jamaican culture and ours, which is Indian,” says Nimisha Patel, co-founder and creative director for the Refuge hotel brand.

More than 50 percent of hotel rooms in the U.S. are owned by natives of India, the result of a 1965 immigration policy shift. Some migrated here as engineers or doctors. Others, schooled in real estate, invested in hotels. “Our parents operated roadside motels and hotels, because hospitality is innate in our culture,” she says.

In 2019, Nimisha and two Refuge co-founders—her husband Jay and his brother Anup—set out to redefine hospitality. Their biggest challenge was combing through communities to find properties that other developers eschewed. “We thought it feasible to go into a neighborhood near Charlotte’s central business district,” she says. “VRBO and Airbnb uncovered that people like to be in a local neighborhood.”

What they found in the walkable Belmont neighborhood—tucked in between shops, breweries, and tattoo parlors—was a one-story building with a Mexican restaurant on one side and an empty burger joint on the other. They bought it, continued renting to the restaurant owners, and converted the burger joint into a hotel and cocktail lounge. Hylton-Daniel focused on the interiors and reached out to architect Nathan Umstead, founder of Raleigh’s Evening Studios, for room configuration.

Together, they designed a destination where guests can stay and neighbors can gather. “We all looked at this as a way to breathe life into this building that’s 65 years old—one more time,” Umstead says. “The lounge is the first thing you step into, then the hallway, and the five rooms.”

Each quirky room is way below 300 square feet, when a typical entry-level hotel room measures 300-350. One room features two beds with facing footboards across from sitting area and kitchenette. Another offers four queen bunkbeds, four dressing stations, and an extra bath. One more offers a king bed and a nook for crib or teleconferencing.

All benefit from Hylton-Daniel’s selective, splashy touch with ceramic tiles, lighting pendants, high-end wallpaper, and eclectic art— including photos of cricket-playing Indian women. “Alicia was critical in bringing all that to life,” Nimisha says. “It’s a hotel but an experimental space.”

That’s because in two years, a new and permanent hotel will arise there, with 100-130 rooms. “We’ll design with the community—it’ll be based on what we’re seeing in this space,” she says.

That means a hotel branded by a diverse team of owners, designers, guests, and neighbors. 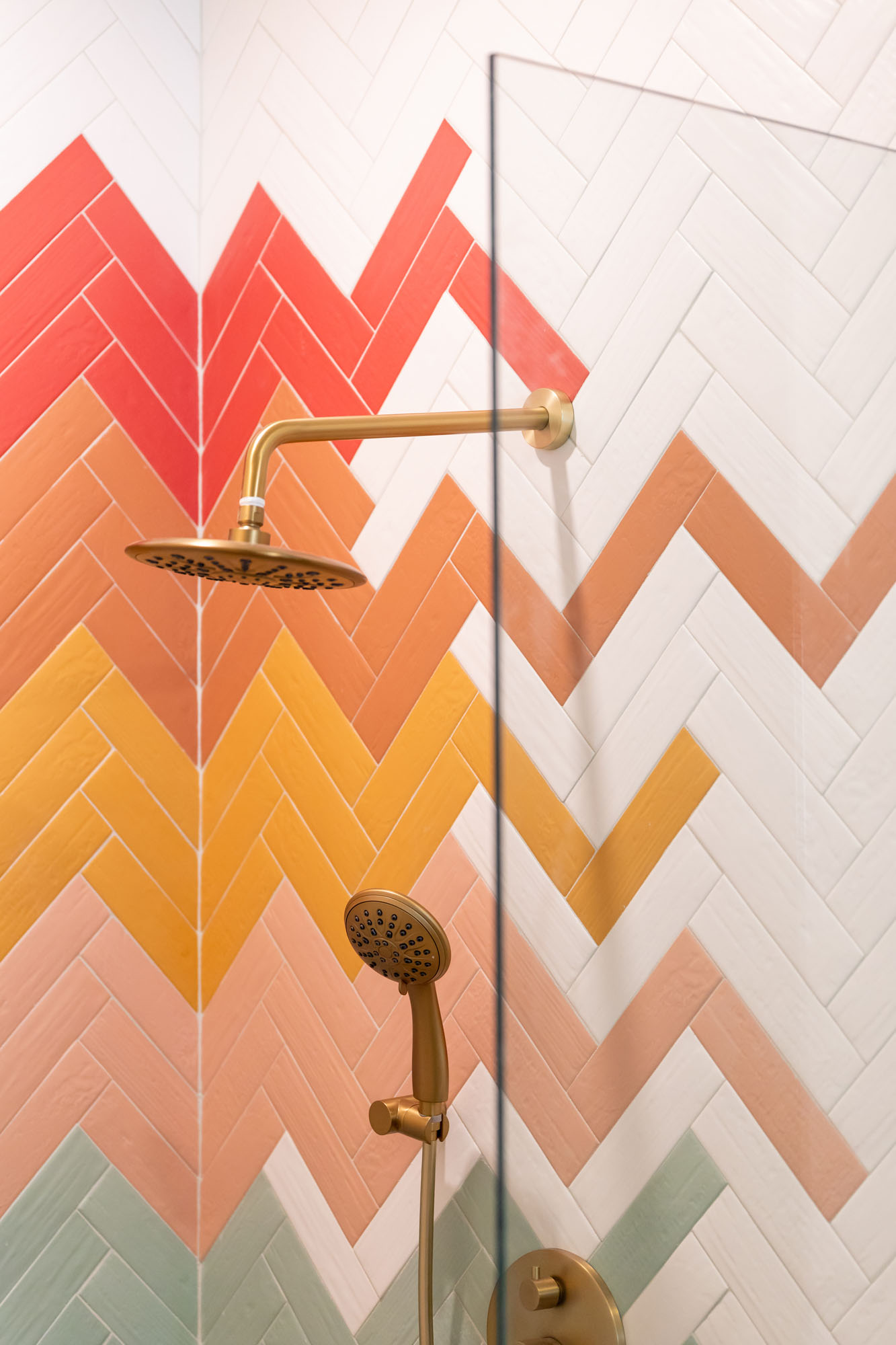 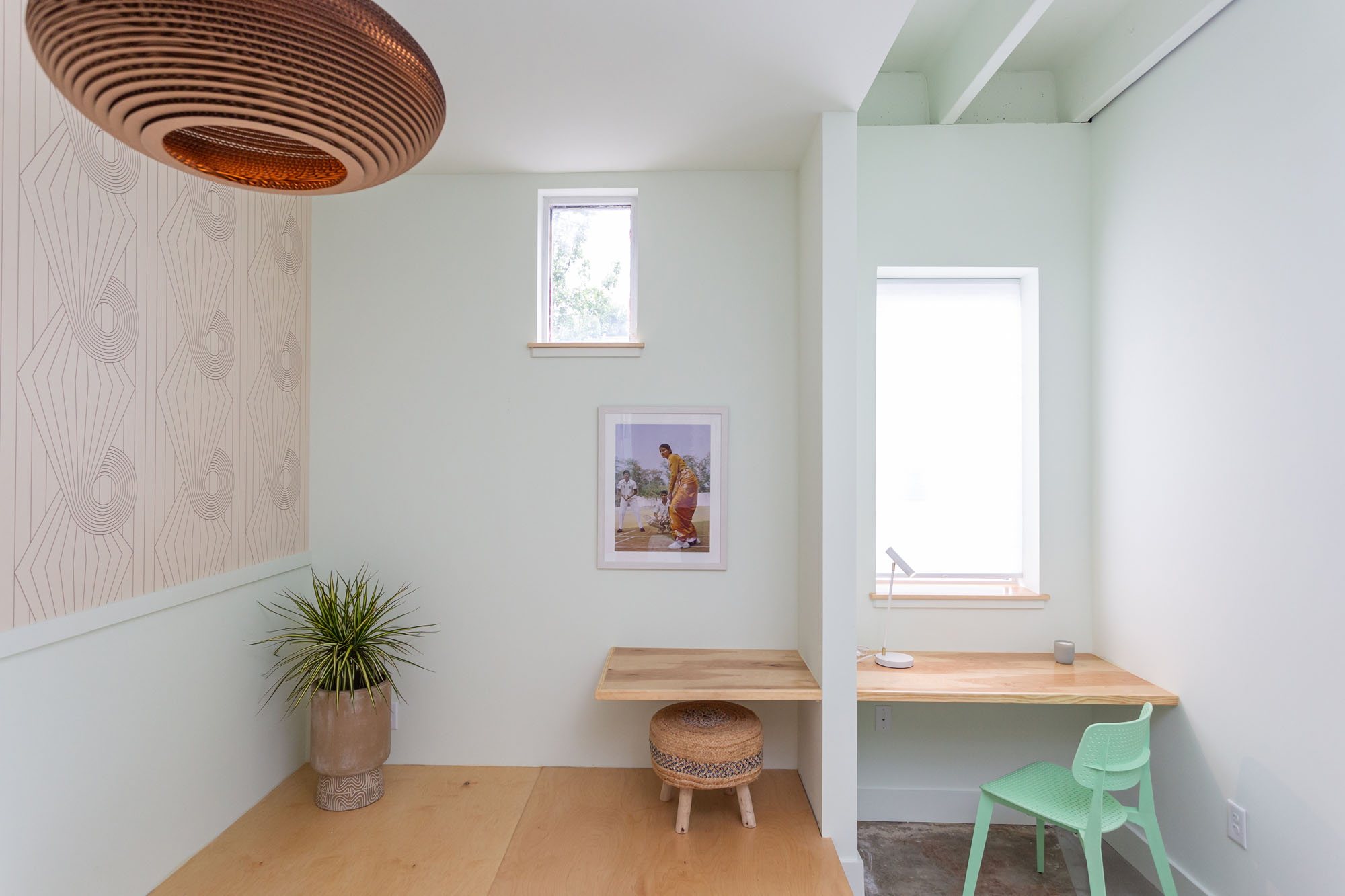 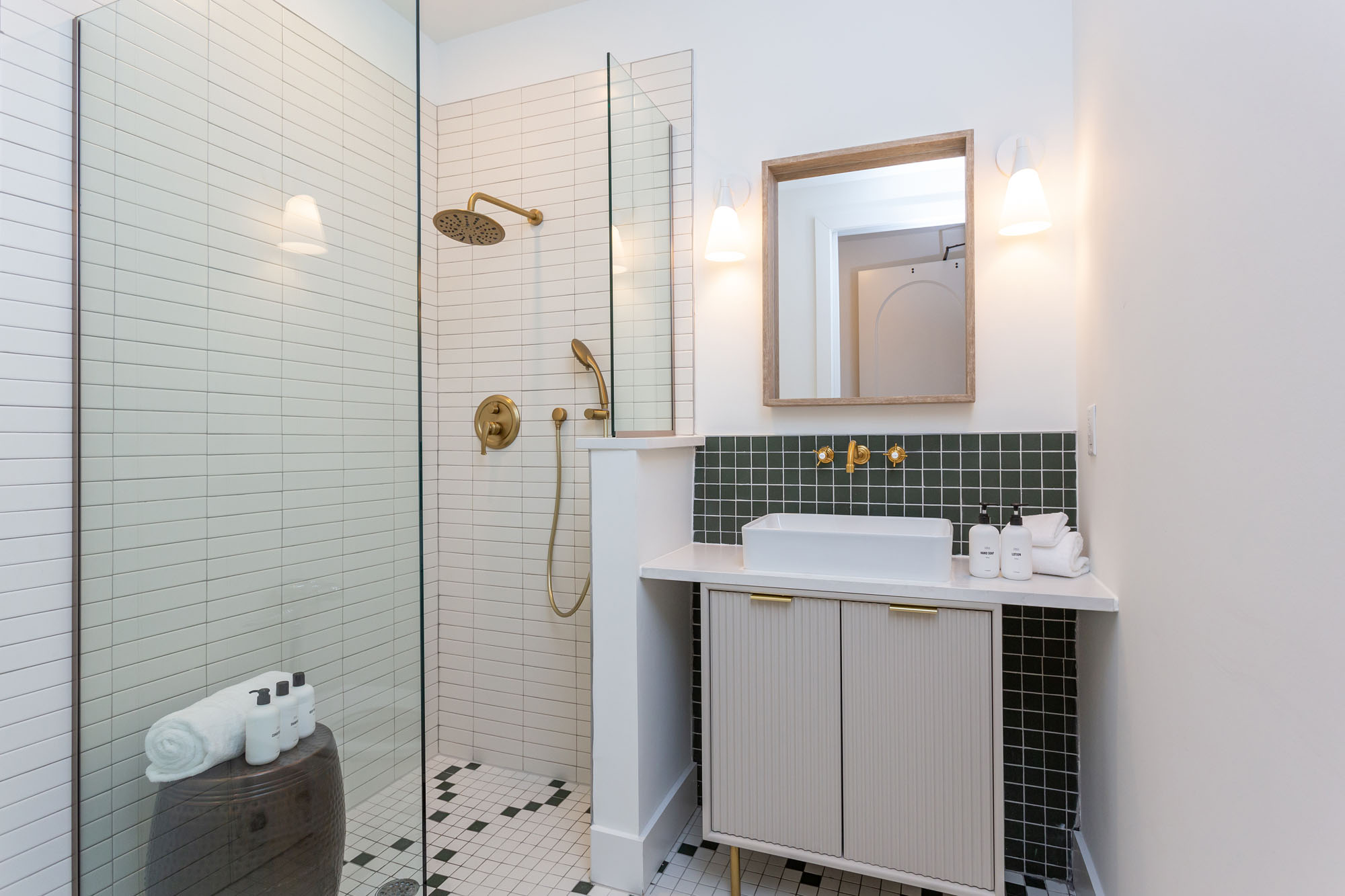 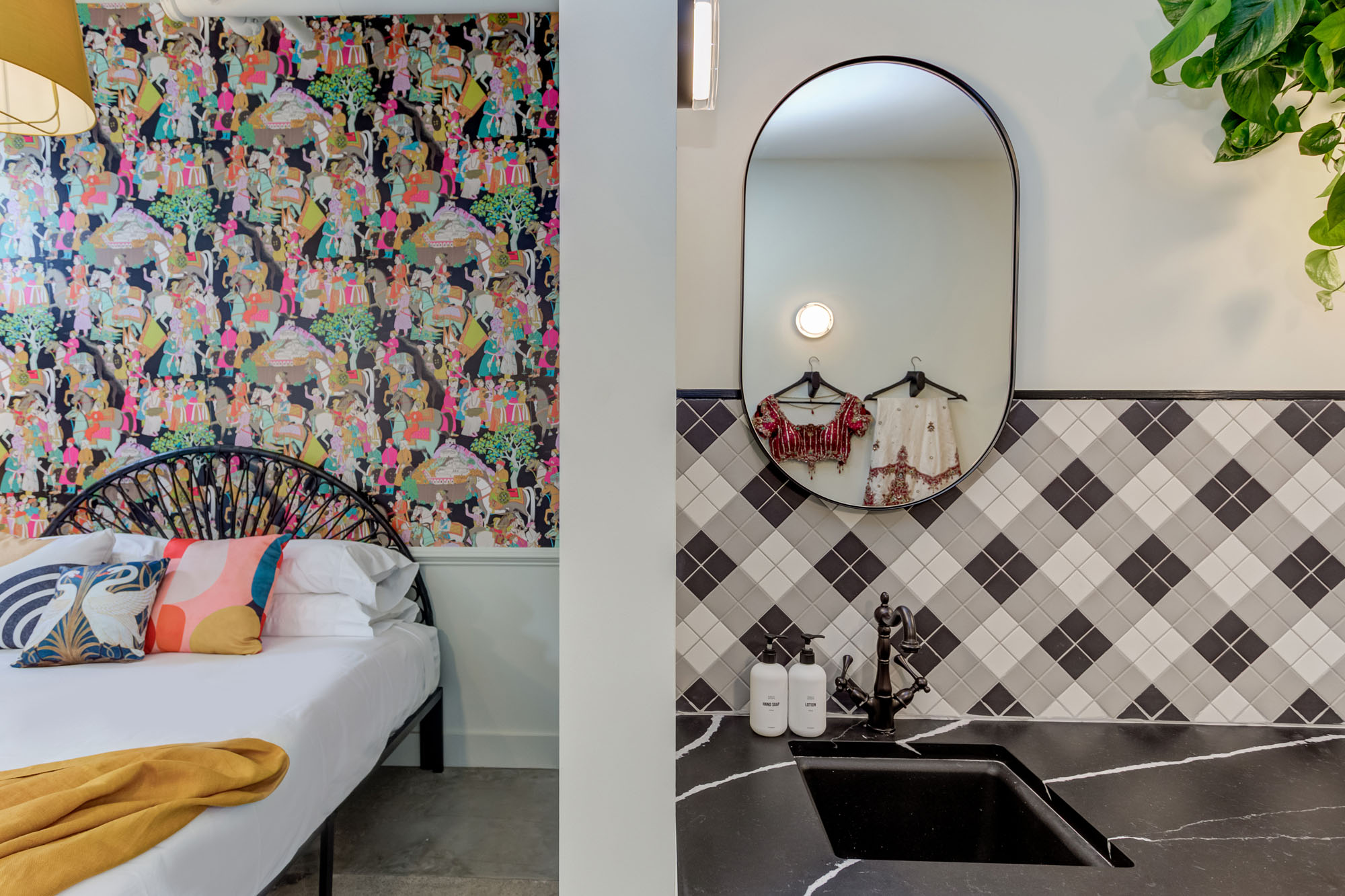 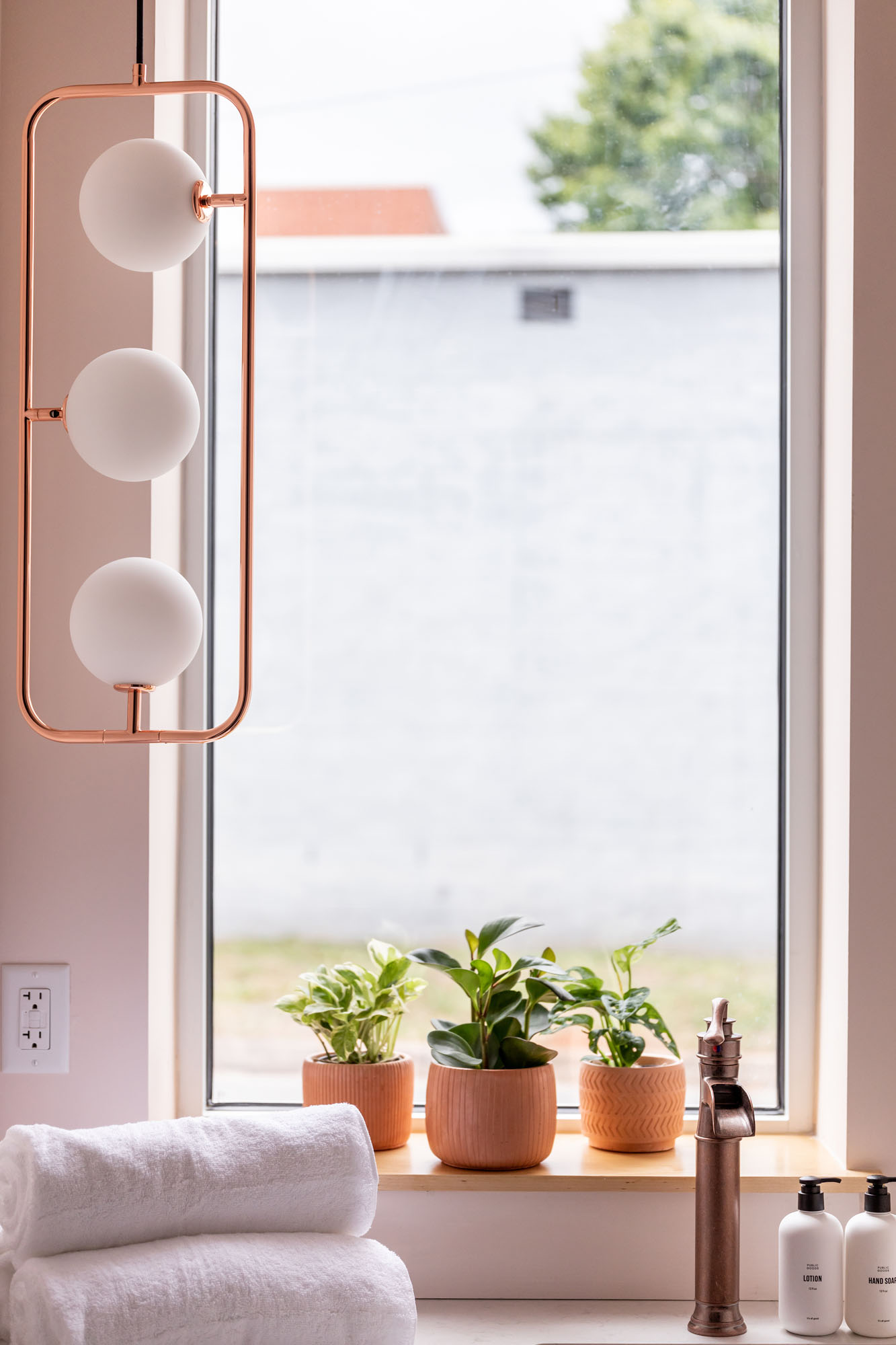 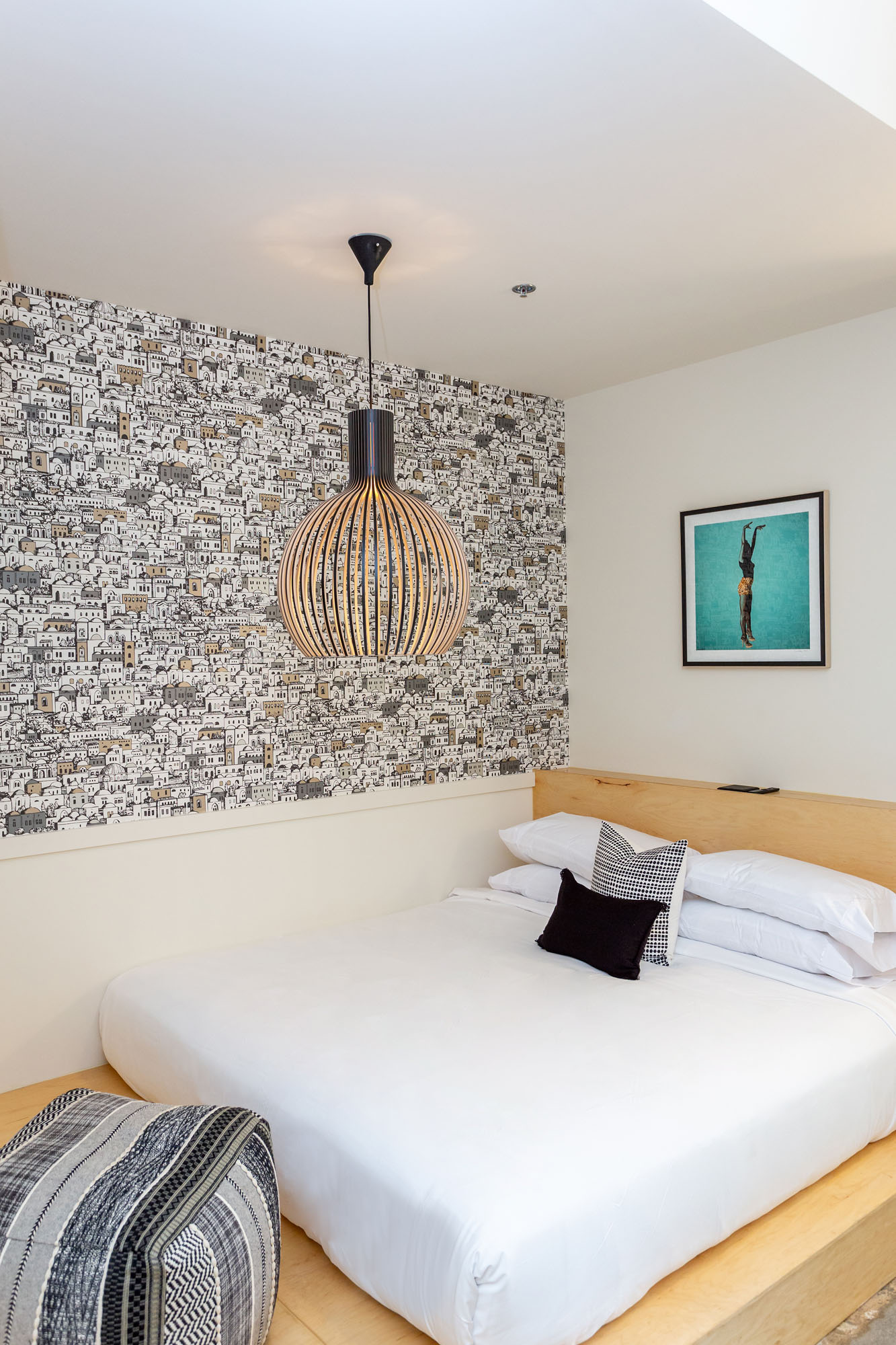 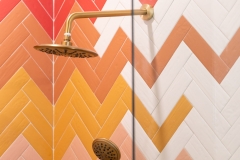 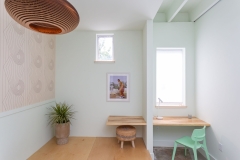 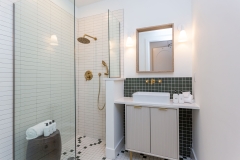 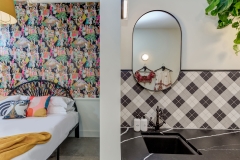 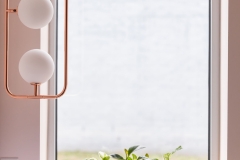 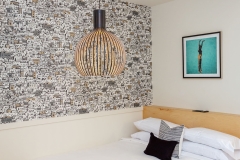 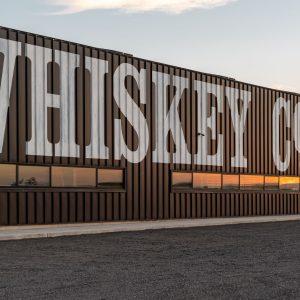 Back on February 23, Metropolis magazine ran an online feature I wrote about the design of a complex of three buildings by Seattle’s...