The budget inspired the shed roof of Chad Everhart’s new “Modernist Cabin” in western Carolina, and the shed roof, in turn, drove its design.

Sure, he subtracted two spaces from the box-like form for an entry stoop and a back porch.  But it’s the simplicity of the roof line that defines this cabin.

“I tried to look at the modesty of a cabin as simple, basic shelter,” he says.  “And out of the box and the shed roof, I carved out the two covered spaces.  I’m abstracting what a cabin is, in a modern way.”

Situated on a small (0.3 acre) lot in a neighborhood with prescriptive standards that mandates rustic dwellings, the project reinterprets the stereotype inherent to mountain cabins. Everhart designed it for an interior design professor with a collection of mid-century modern furnishings and a preference for austere aesthetics.  Since he’s a commuter, it serves as his temporary home during the school year, and a mountain getaway for at other times.

The 650-square-foot cabin blends vernacular elements with simple, contemporary design.  The shed roof makes it a model of affordable design and construction through a minimal footprint, use of indigenous materials, maximization of volume, and doing double duty as structure and function.

On the exterior, the light, wood-framed structure uses unfinished, rough-sawn Eastern Hemlock as rainscreen to acknowledge the local context of log siding, while the interior is white-washed (with the occasional panel of color)  to highlight the owner’s furniture and art collection.

“It’s a raw house, with a concrete floor, and kind of gritty when you go in,” he says.  “I made the structure the finish – all the floor joists are exposed.  There’s a chain link fence for the stairwell and railing, for transparency.”

Under the minimal shed roof are a kitchen, laundry and bath area to the rear of the cabin, with a loft bedroom overlooking the  living area below.  The stair follows the roofline upward.  “It was kind of a game I had to play, to maximize the volume,” he says.  “It’s spacious, but I didn’t waste a bit of it.”

He cast a skeptical eye upon his client when asked for a balcony off the bedroom, but found a way to satisfy him.  “I told him that there was no way he could afford it, but then I used it as a design opportunity,” he says.  “Instead I let part of the rainscreen continue ove a sliding glass door that overlooks the woods.  It’s got a balcony feel, but we didn’t have the cost of structure added.”

And, it sticks with the program.  “Everything happens under one roof,” Everhart says.

For more on Chad Everhart, go to http://www.chadeverhart.com/index.html 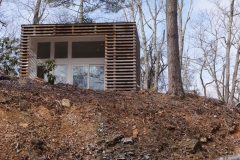 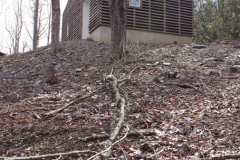 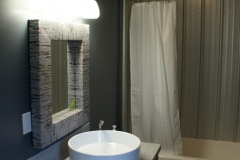 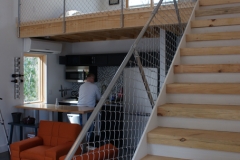 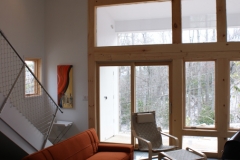 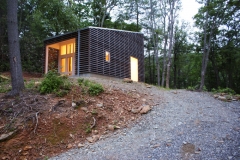 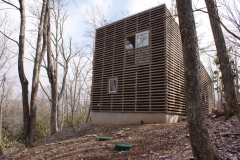 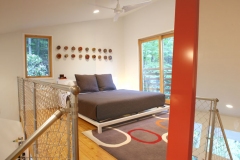 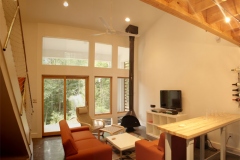