Ilana Shafir was born in 1924 in  the city of Sarajevo, now the capital of Bosnia and Herzegovina.  She knew from an early age she was an artist, though her parents were less than enthusiastic.

“In those days to be an artist was not a proper career choice for a woman,” she says. Her studies at the High School for Architecture were disrupted by the Nazi invasion of 1941. Shafir and her family escaped to the small town of Kula, where they miraculously found protection. No one gave them up, not their neighbors, not the Italian nor even the German soldiers. Shafir painted while in hiding, using old book covers for canvases. She painted landscapes and villagers, trading paintings for food.  Years later she discovered that both the Italian commander and the local priest had dedicated themselves to saving her family. She believes that “most people, if given the choice, would choose to be kind and humane.”

Shafir continued her studies at the Art Academy in Zagreb, Croatia before emigrating in 1949, at the age of 25, to the coastal town of Ashkelon in Israel.  She processed the incomprehensible Holocaust and the loss of her extended family with pen and ink, drawing portraits of arriving immigrants  When her sadness was exhausted, Shafir began to explore the beautiful physicality of her new country, both in watercolor and mosaics. The two media are an unlikely pairing. Shafir’s watercolors are ethereal creations of opulent gardens and fantastical creatures. She started with a mono print of abstract stains and drew over the field of colors independent of their abstract shapes until distinct images emerged and every spot of color was defined. It is an unforgiving process that allows no corrections. Shafir credits her years of working in watercolor with providing her the confidence she required to develop
her intuitive method of working in mosaic.

After a lifetime of expressing herself in paintings, drawings and ceramics, Shafir has dedicated herself for the last 20 years to the creation of fine art and architectural mosaics. She works in a garden of ingredients: natural stone, translucent glass, handmade ceramic, rejected sculptures, cast off dishes donated by neighbors, broken tile, Italian smalti, and smooth Mediterranean seashells and pebbles. Buckets of materials litter her studio, sorted by provenance, a choice that acknowledges their intrinsic value of origin.

Her method, which she calls “spontaneous mosaics,” hinges on the respect paid to each individual element. Working without preconceived ideas, sketches or drawings, Shafir places an assorted palette of materials on her work surface. Then, she listens and uses her eyes and ears and her finely tuned sense of the relationship between inanimate objects to allow a synergy to develop. She likens this moment, when two elements become “united and inseparable,” to a mosaic “kiss,” the recognition of a chemistry between two formerly unrelated objects. “I see it with my eyes, but mainly I feel their natural attraction to each other.”

Pieces are chosen, moved, added, rejected, and played with until she is satisfied with their dialogue. Only then are they glued in place. Following this methodology Shafir creates radically textured, brilliantly colored worlds, inhabited by a stunning life force.

At 87, Shafir still travels the world teaching her spontaneous method, encouraging students to discover unexpected solutions. In October, the  Association of International Mosaic Artists and the municipality of Ravenna, Italy will honor Shafir with a solo exhibition at the Biblioteca Classense. This is tantamount to ordaining her the matriarch of contemporary mosaic.

The poet Yossi Gamzou said, “There are people with hearts of stone and there are stones with human hearts.” Ilana Shafir has given heart to an ancient craft. In her powerful hands it has become a modern art. 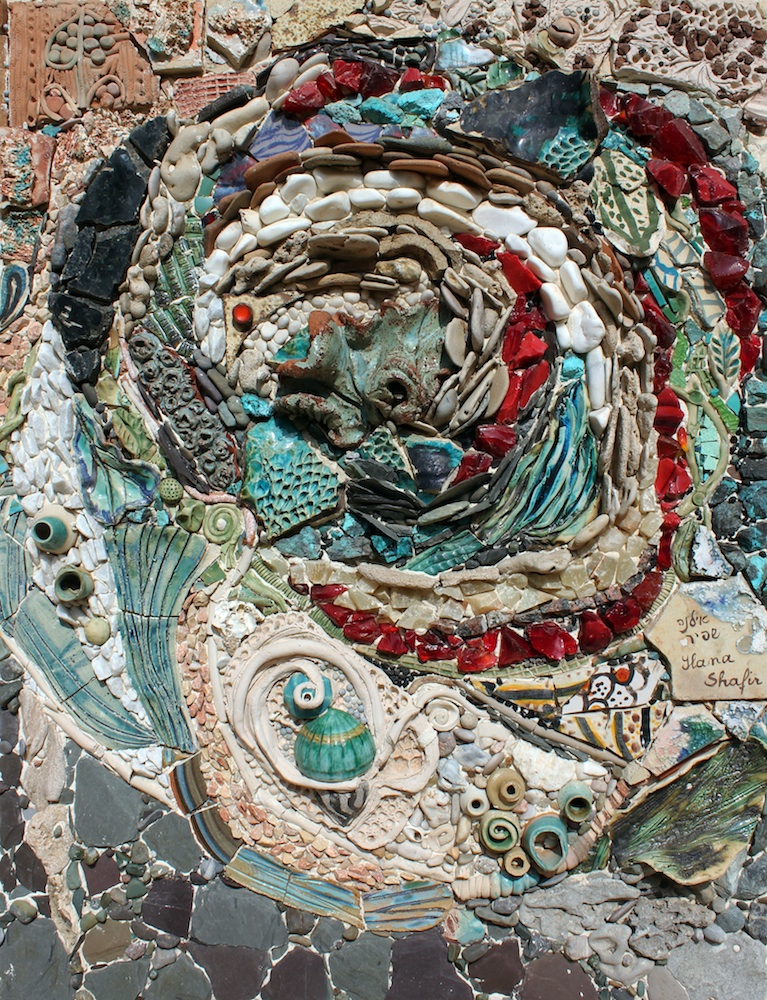 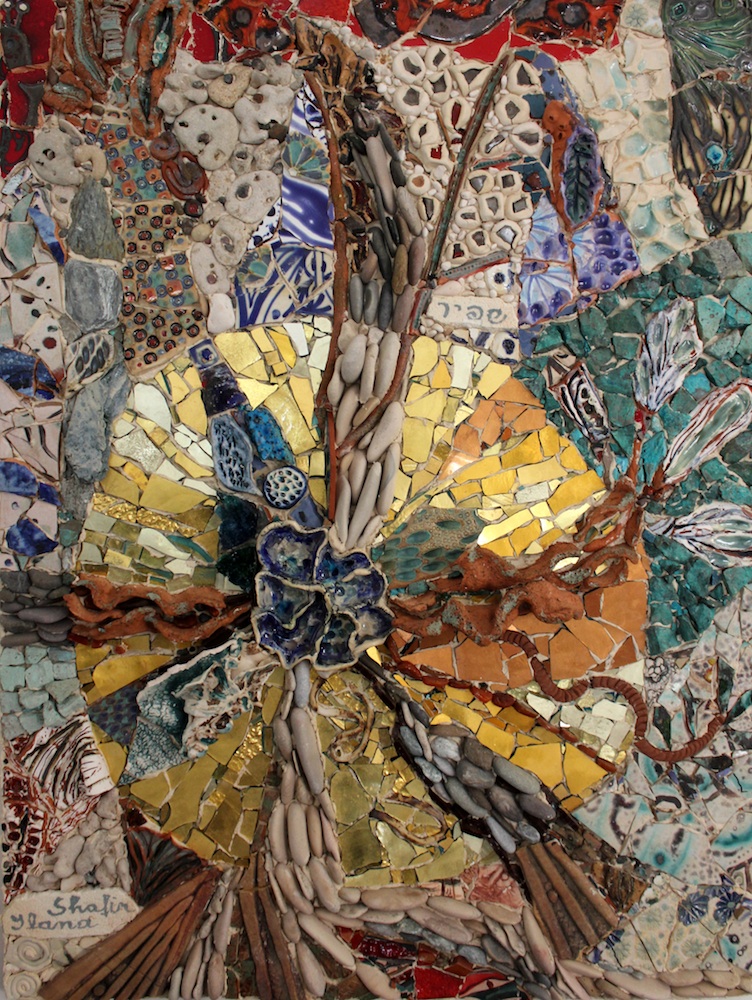 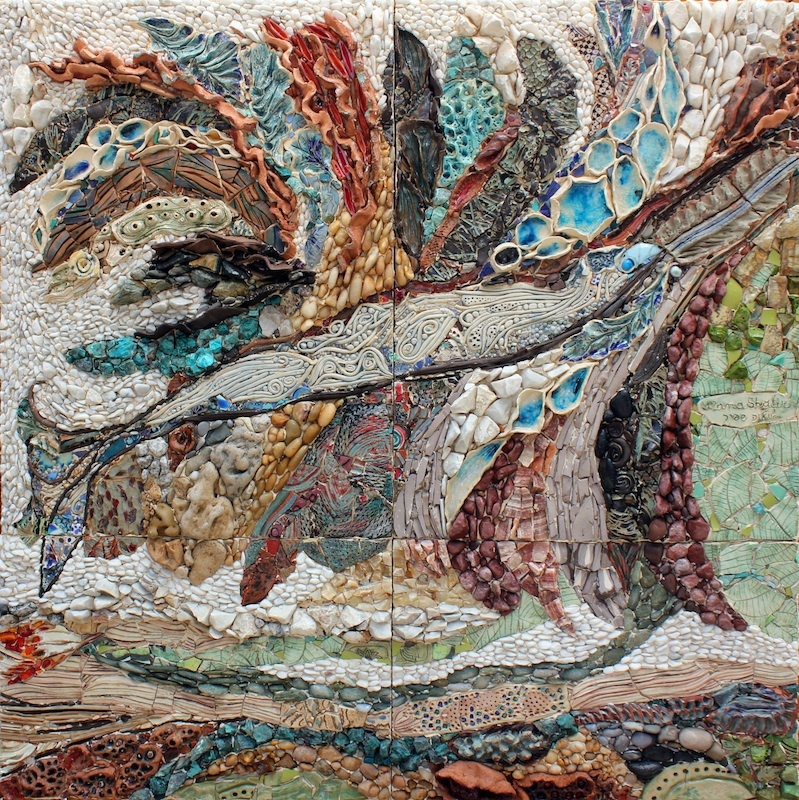 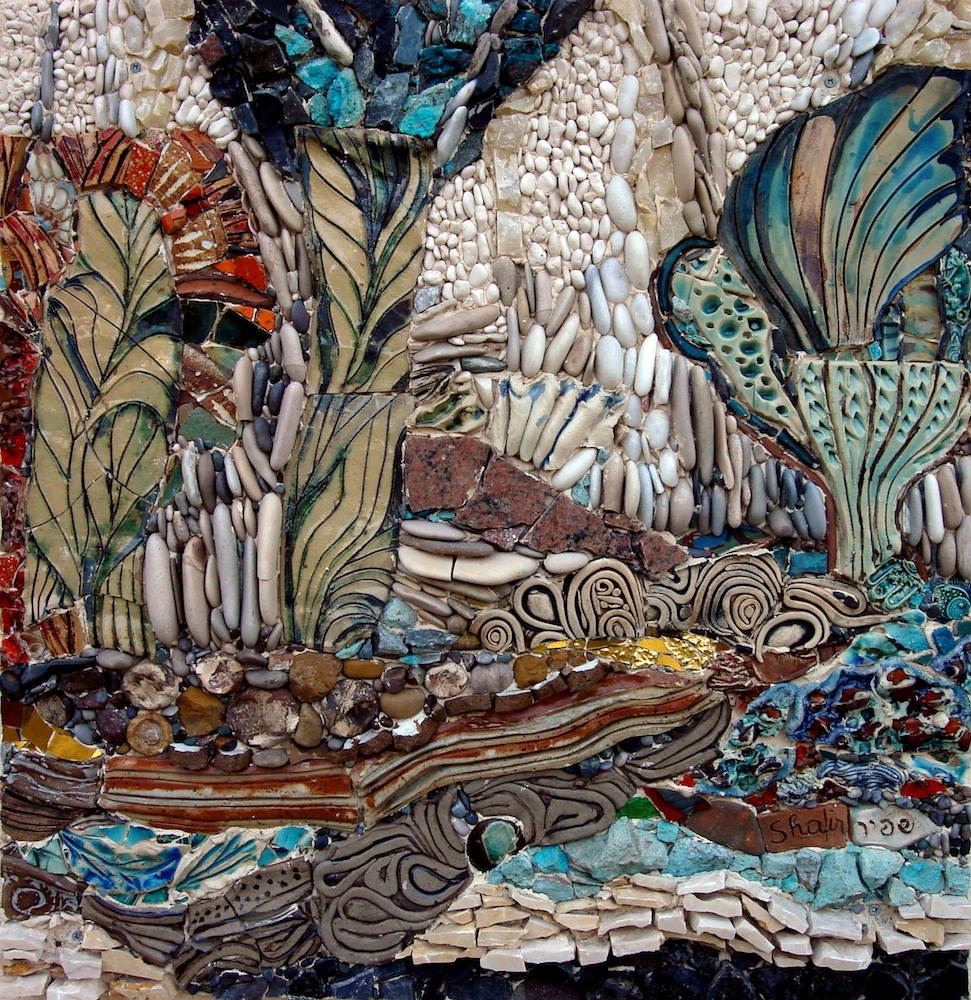 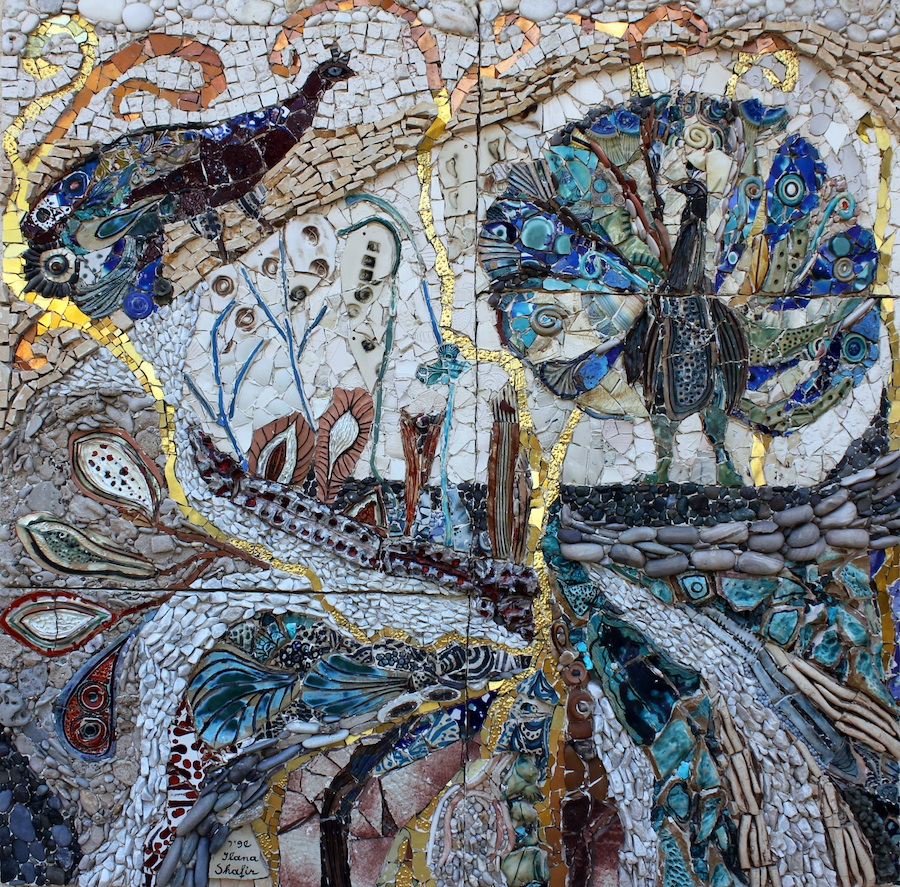 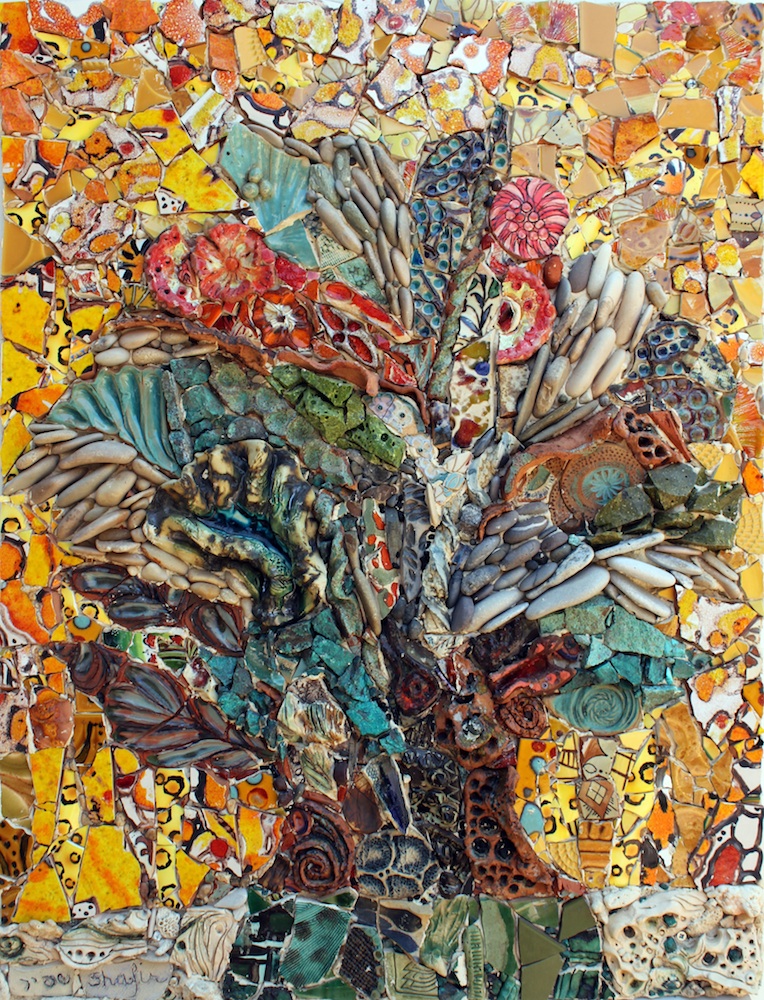 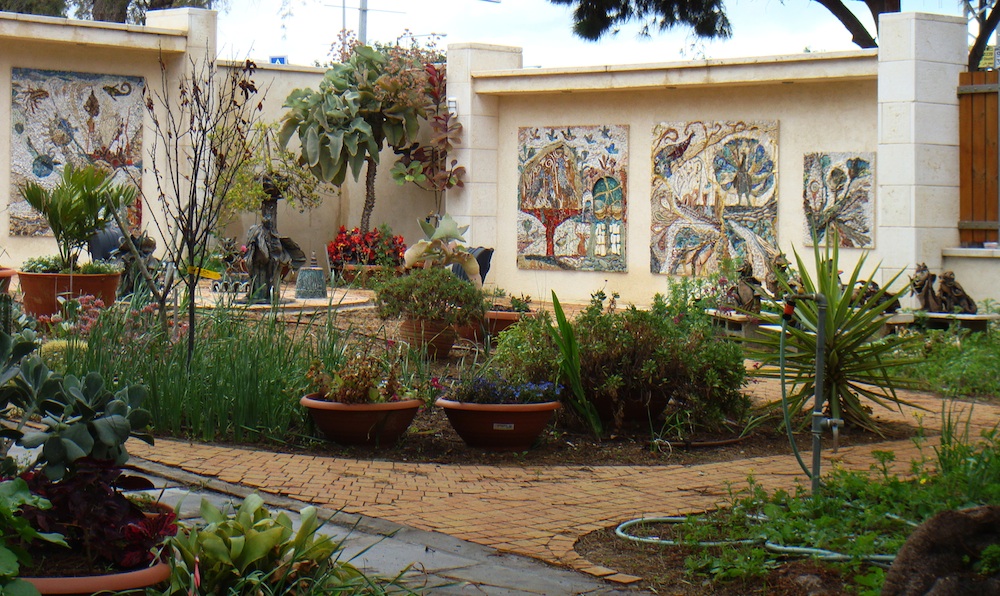 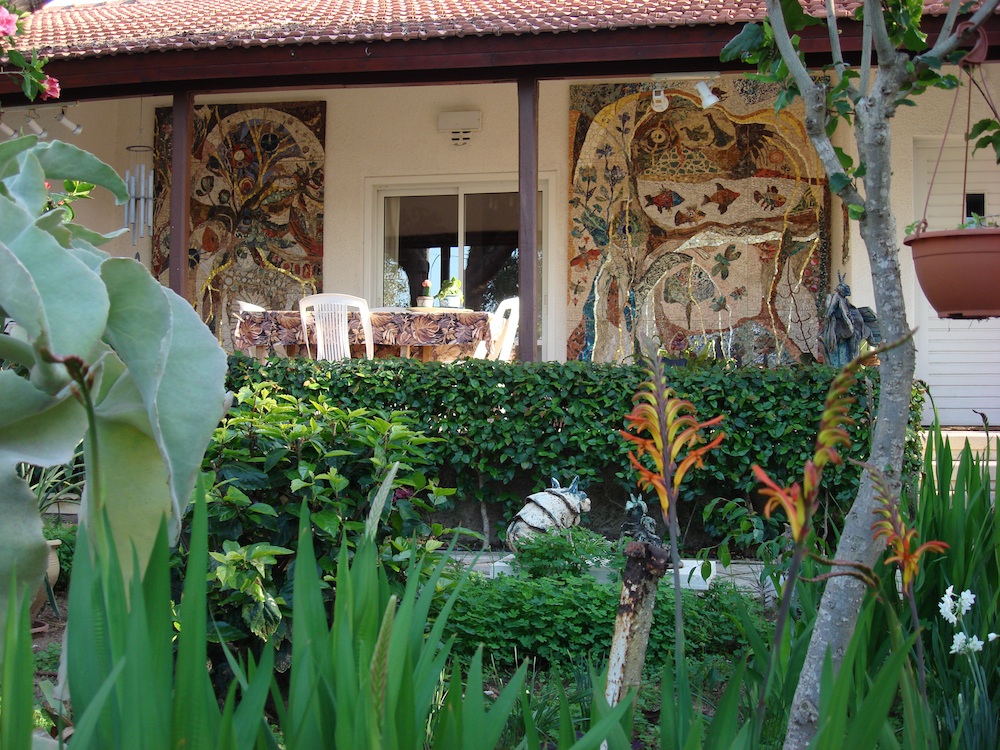 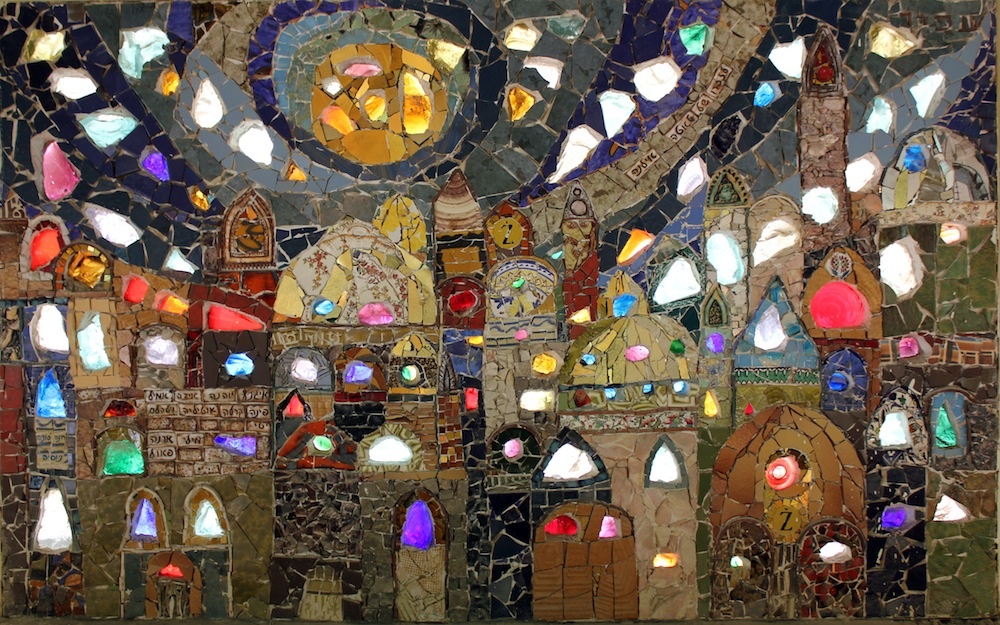 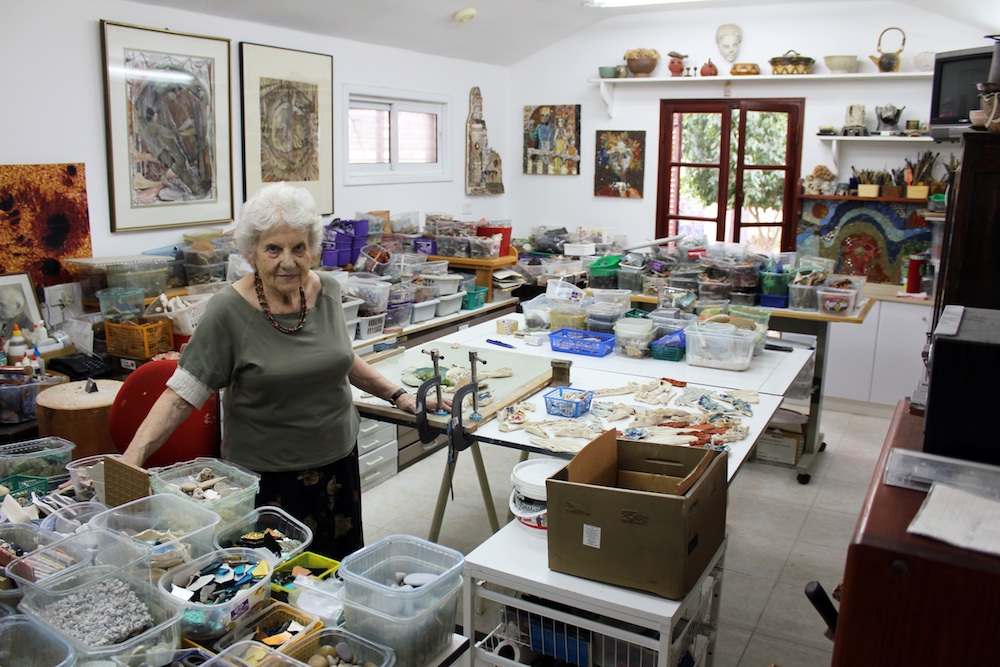 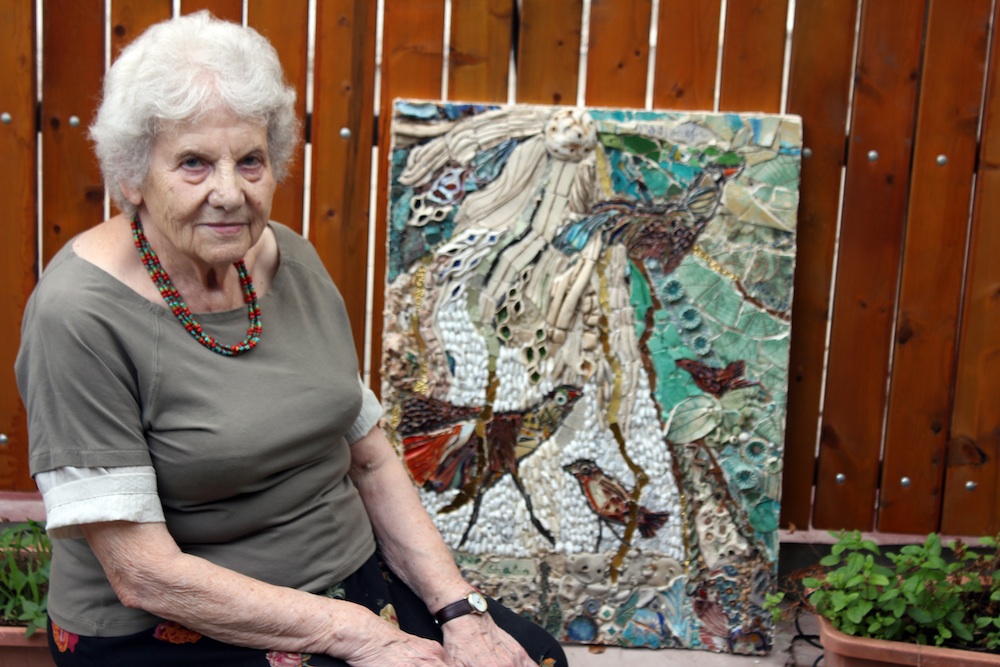 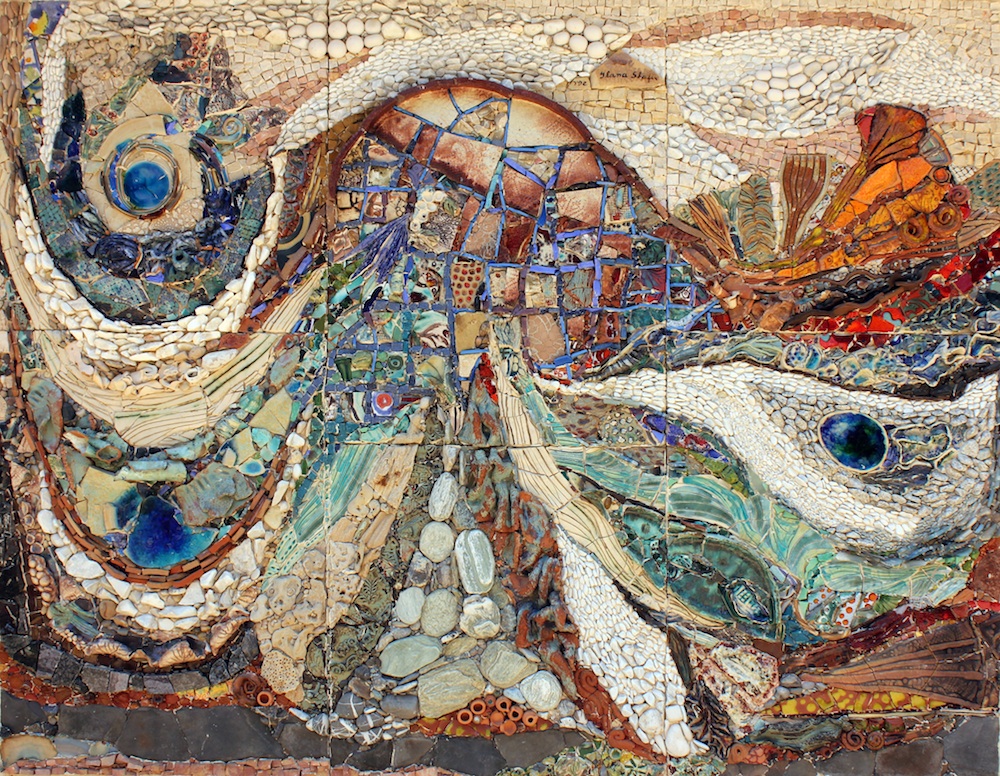 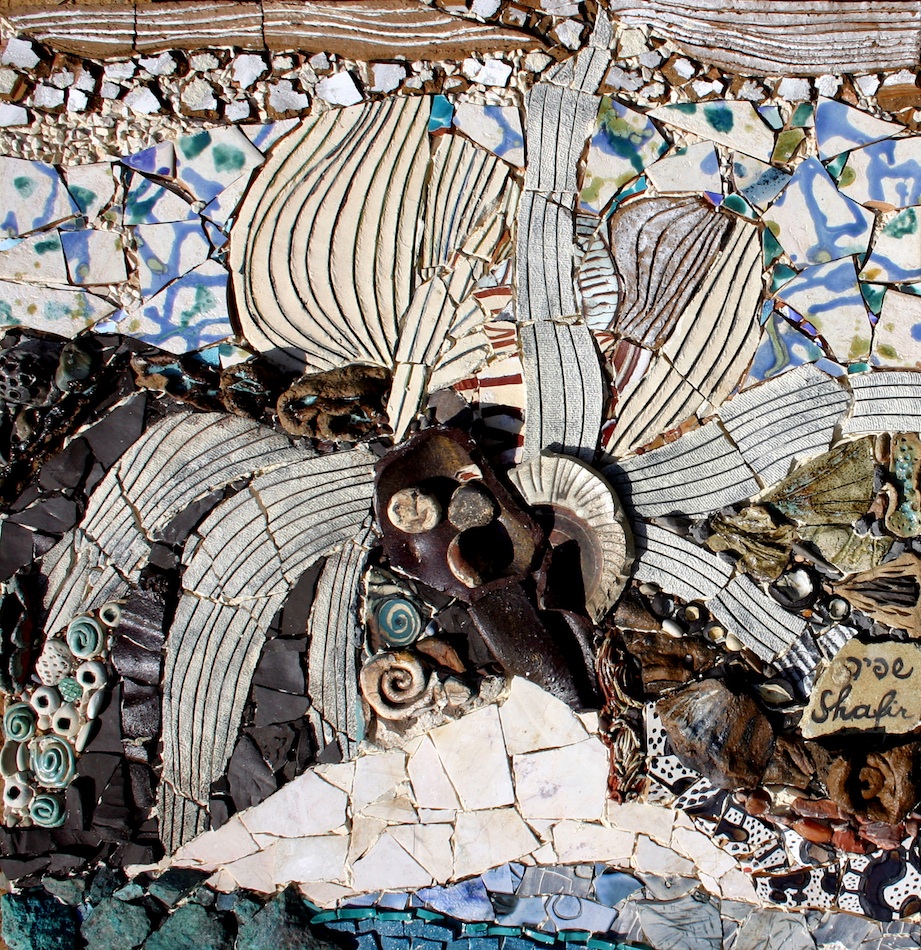 Many thanks for the article about Ilana. She’s a treasure in our art medium 🙂

what a beautiful piece about such an amazing artist!

Ilana is inspiring on so many levels. Thank you for sharing her work and her thoughts.

“There are stones with human hearts”
What a wonderful and honorable depiction of Ilana Shafir’s Art.

This article so beautifully articulate Ilana’s biography, method of working, and the soul of the artworks. We have long known that you are a master in your own craft JoAnn, and this article is truly extraordinary work, and certainly one of the best pieces written about my mother. I feel as if you wrote this article using the Spontaneous Mosaic method. Each word/tesserae is justified, carefully selected, and seamlessly placed.

Many thanks to the editor for sharing Ilana’s story and the experiences that shaped her fresh and thoughtful approach to design.

Many thanks to the editor for sharing this story. There is something for us all to learn from Ilana’s methodology — to let local materials, as well as moment-to-moment inspiration, guide our work. It is an approach not limited to the art of mosaic — one I have found invaluable in my own work as an architect. Thank you JoAnn for this wonderful article.

What lovely comments, I am grateful for all of them, thank you. I think I was inspired by Ilana to choose the words that magically fit together. She is a remarkable woman and it was a great honor for me to write about her life and her art.

Leave it to the natives of Vicenza, Italy to take a burnt-out, Palladian-style estate designed by Thomas Jefferson and transform...