Interviews and Essays in ‘Above the Pavement – the Farm’

In a slim little volume that’s eminently readable, visionary architects Amale Andraos and Dan Wood have documented how their firm, WORKac, recruited a team of 150 collaborators, built an elevated urban farm at the Museum of Modern Art’s P.S.1 courtyard in Queens, New York, and put on a party for thousands.

Above the Pavement – the Farm! is a distillation of 30,000 pages of interviews with the crew of engineers, carpenters, architects, farmers, artists, technicians, and videographers who contributed to the project.

“It’s kind of a mélange,” Wood says  “But it’s been edited into one narrative that almost reads like a novel.  It was done in a matter of months.”

His firm was selected in 2008 to build a temporary pavilion for a MoMA-sponsored “beach party” at the Queens site.  “Every year the museum hosts its Young Architects Program,” he says.  “It’s kind of a breakthrough thing.  It’s given to architects just starting out with their careers, with the stamp of approval from MoMA.”  Barry Bergdoll, chief curator of architecture and design at MoMA, notes in the book that Phillip Johnson designed the first pavilion, which was basically a disc jockey stand.

WORKac was selected in its ninth year.  “By the time we were awarded it, we thought the program was tired,” he says.  “We decided to use it as an opportunity to experiment with sustainability with an emphasis on urban ecological infrastructure.”

Instead of a pavilion, the firm designed an off-grid urban farm elevated forty feet in the air, with the party area below.  It was solar powered, fed by rainwater and built of biodegradable materials like recyclable cardboard columns known in the trade as Sonotubes.  “The whole thing was made of paper,” he says.  “There was 80,000 pounds of dirt supported by cardboard tubes.”

It was re-christened P.F.1.

It was a floating urban farm, complete with chickens.  Even for someone who writes and teaches about sustainable urbanism, who’s known as a self-proclaimed farmer, the learning curve was enormous.  “The closest we’d been to real dirt was the dust in our apartments,” he says.

They call their concept for urban planning “rurbanization,” believing  that cities need to co-opt the best of rural life and become more localized and sustainable.

The farm produced cucumbers, beans, squash, radishes, and tomatoes in an experimental lightweight dirt called GaiaSoil, made of recycled Styrofoam, compost and pectin gel.  Its produce went to the museum café, to staff members and to the architects and growers.

When it was all over, the entire farm was disassembled and recycled.  “When we took it down, even the columns were recycled,” he says.

They took them back to the manufacturer, who took them apart and turned them back into cardboard. 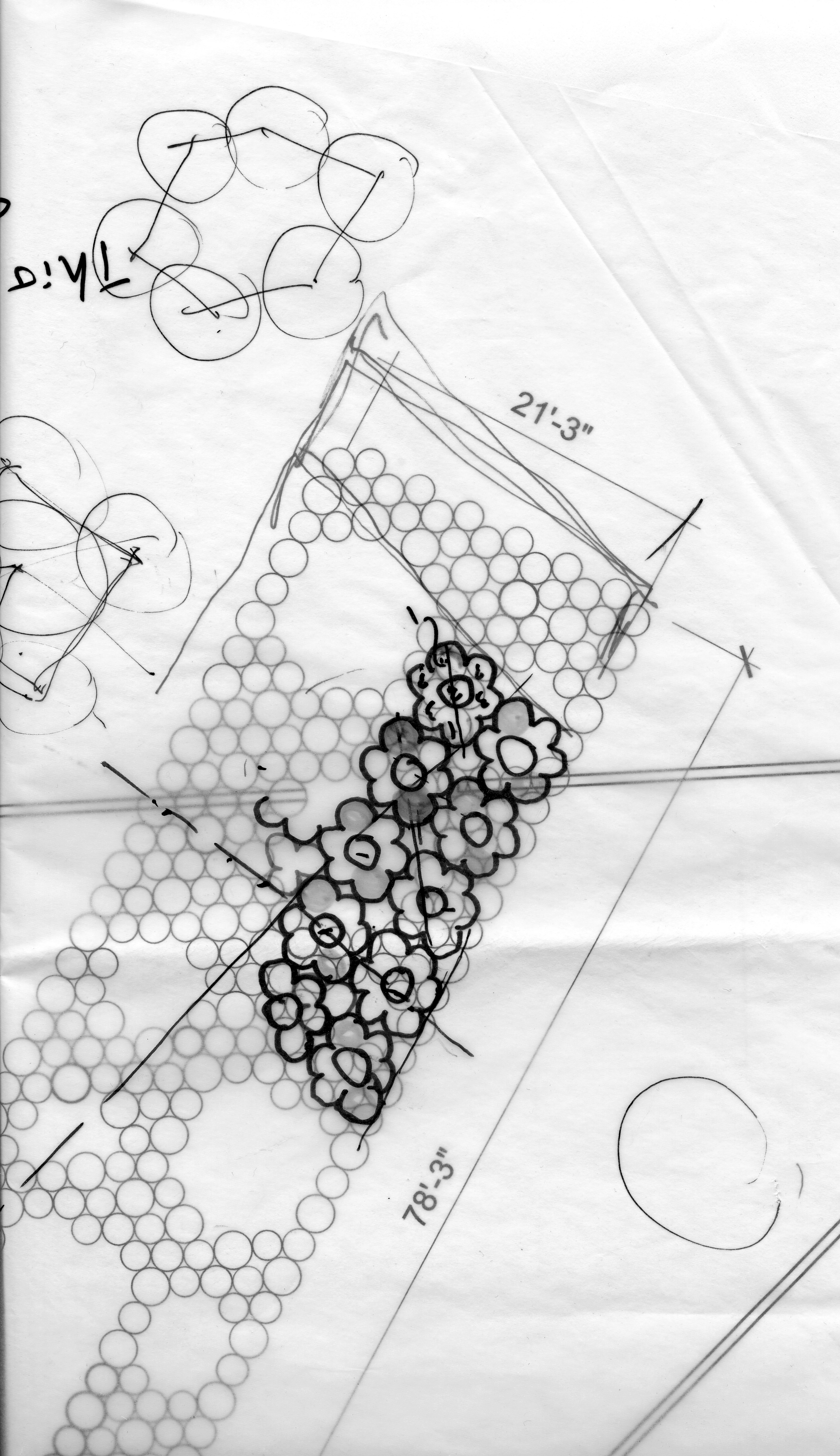 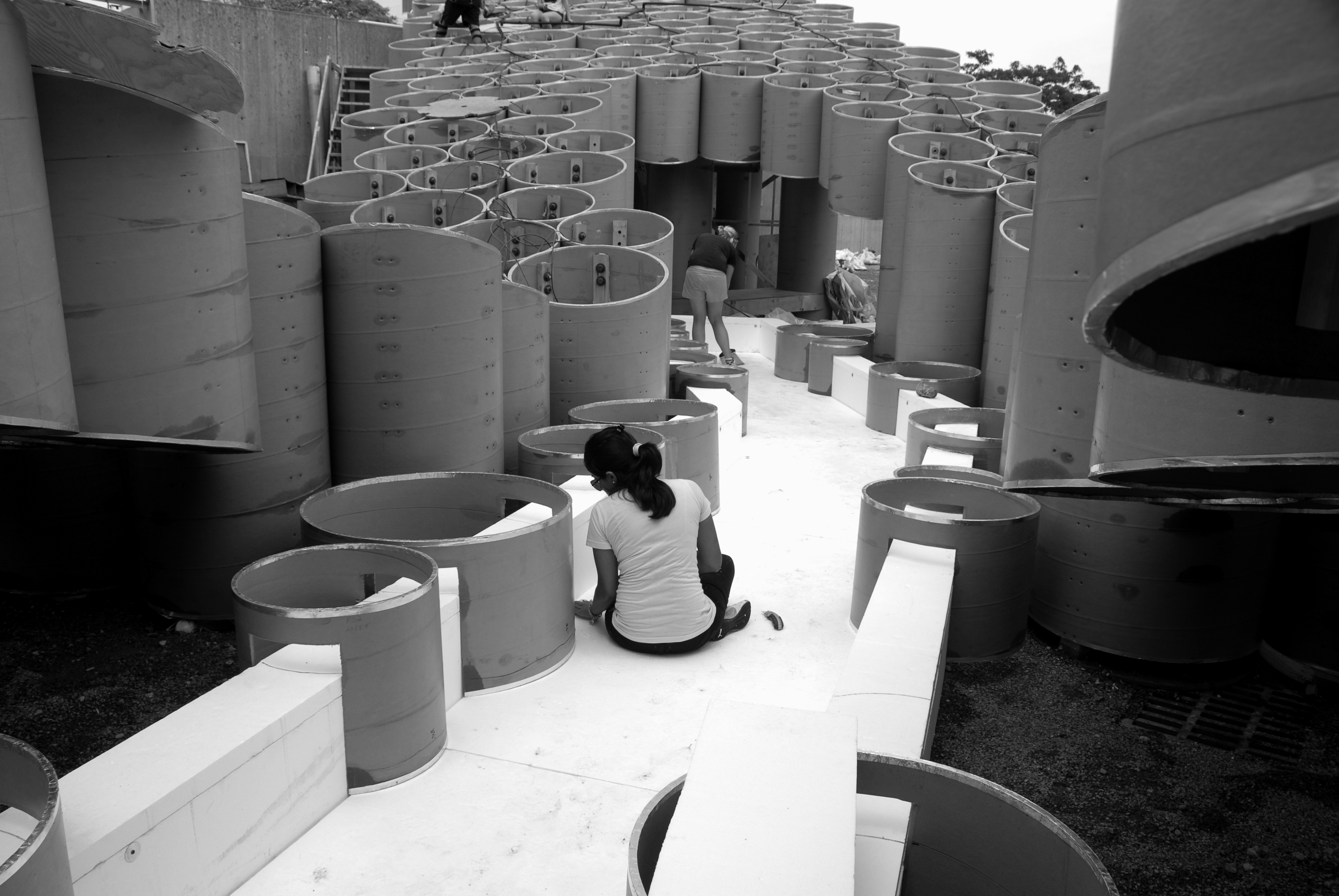 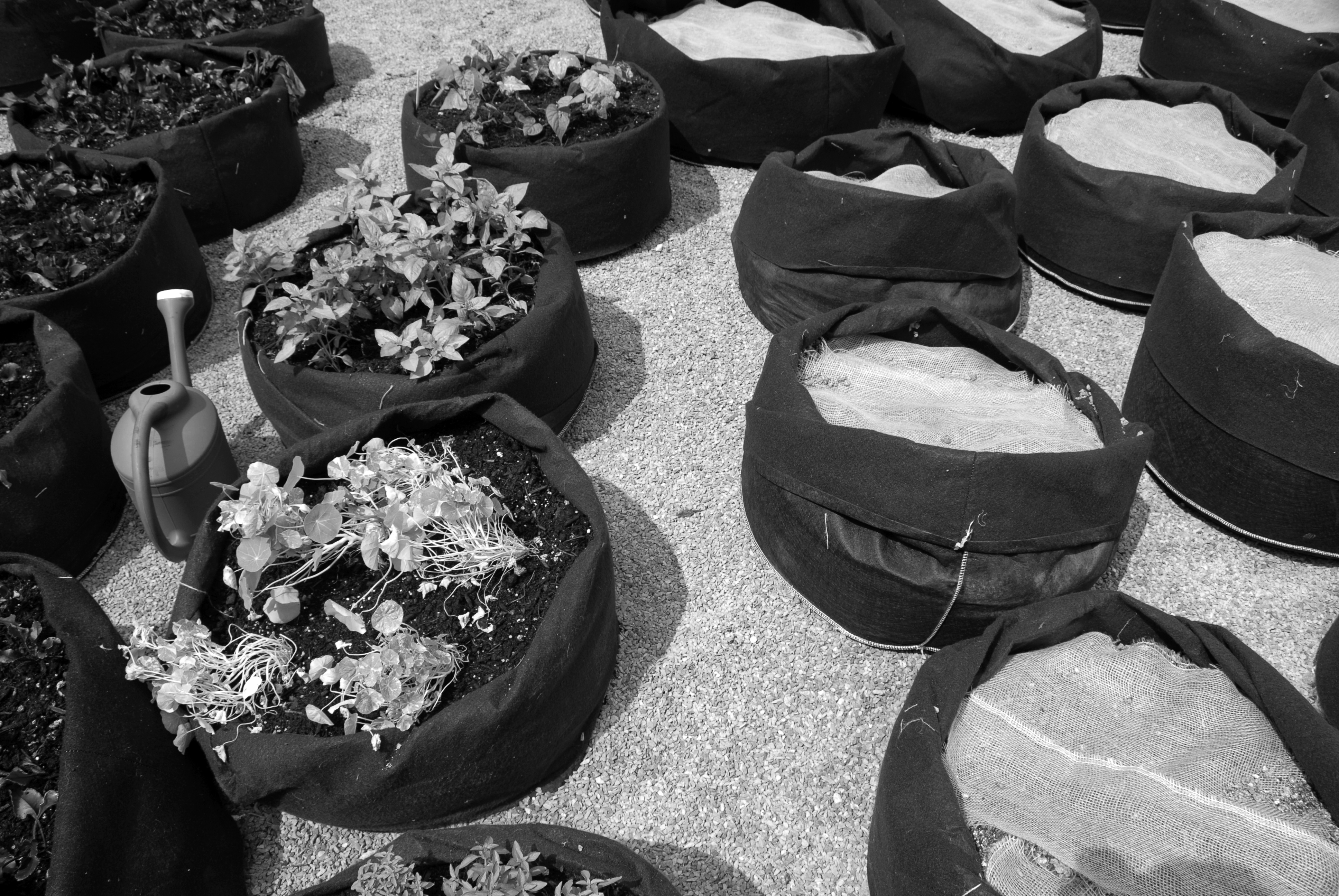 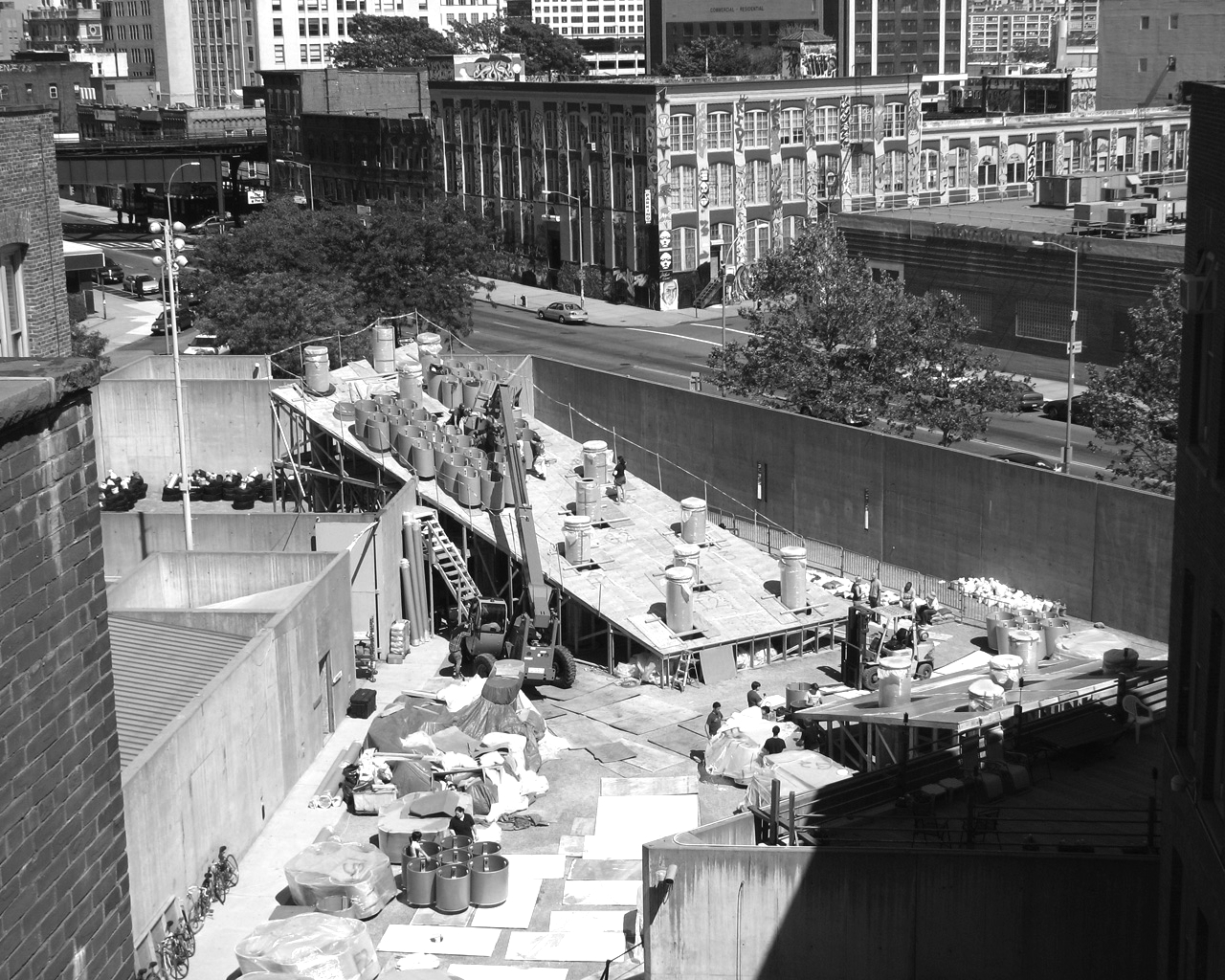 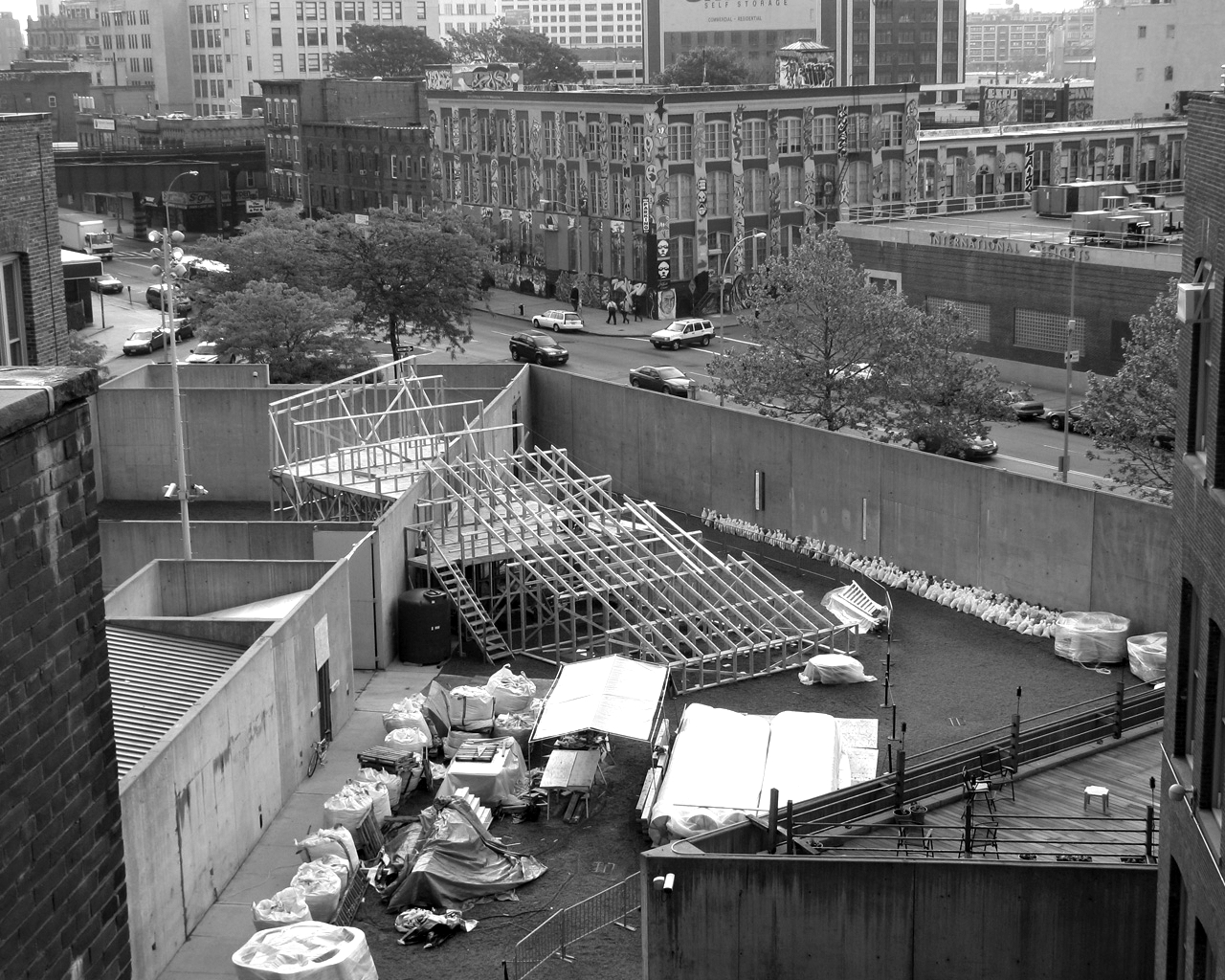 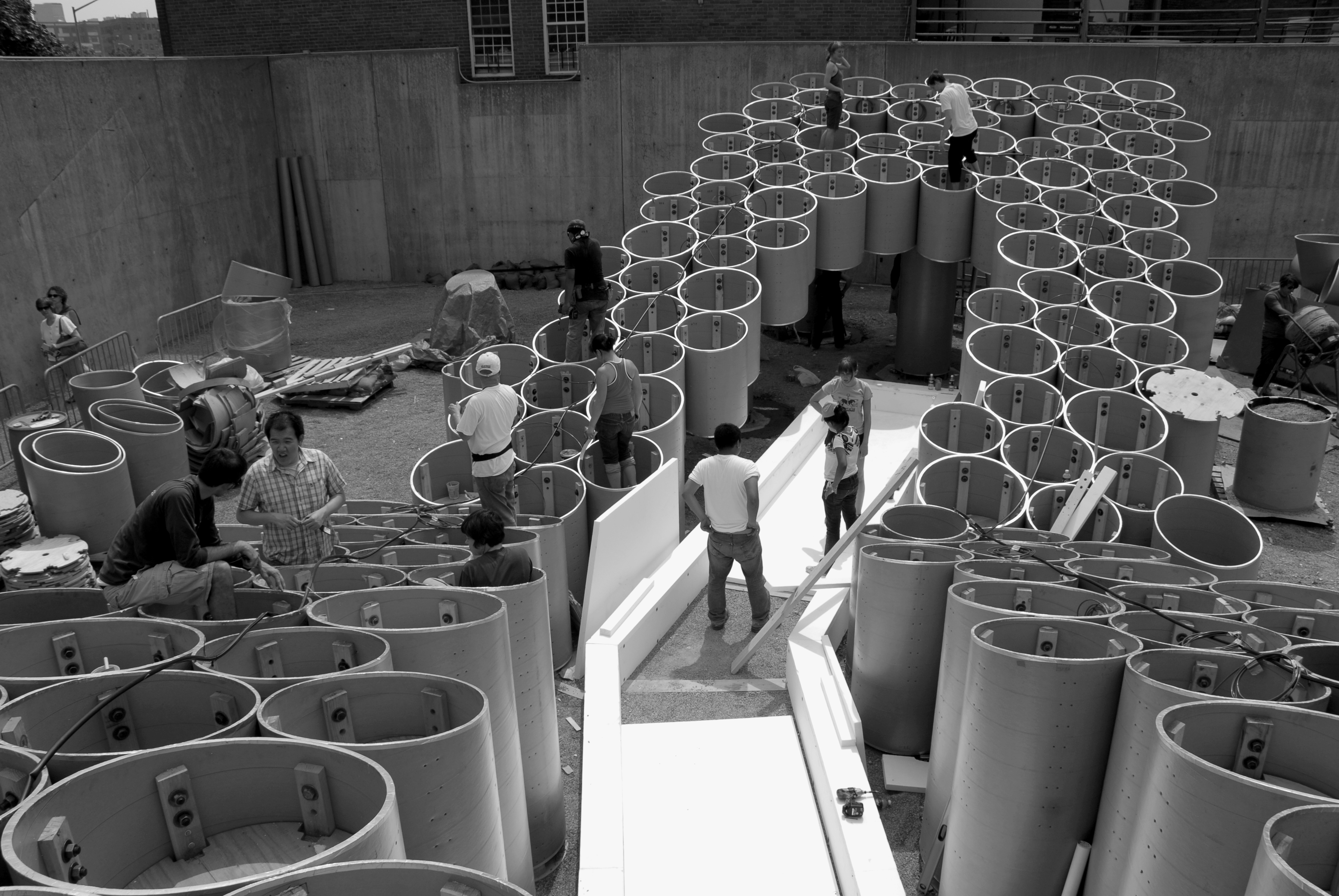 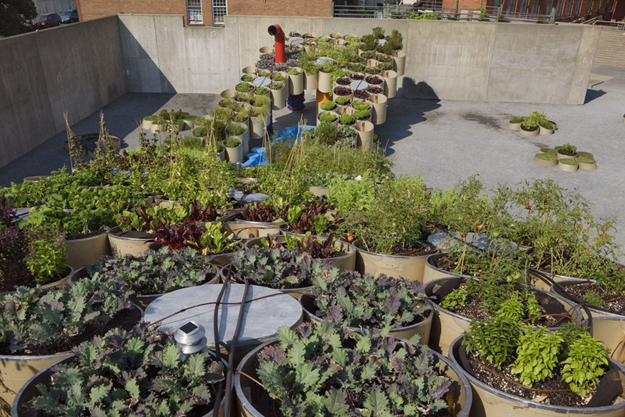 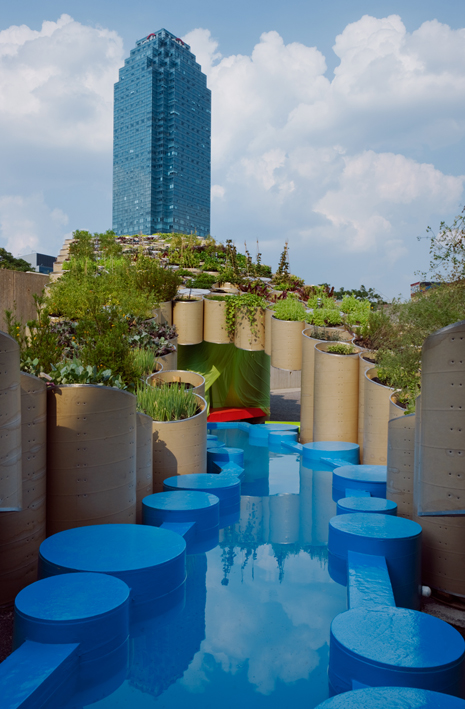 I love your posts & have followed them for sometime now – would love to share them with our followers, etc. Can you suggest how best to do this?

This is fabulous! I’m a big proponent of urban renewal in the broadest sense, which includes the expected digital amenities and the restoration of architectural gems, but also inclusive to bike lanes, light-rail and urban farming. In Atlanta where I live, a friend of mine K. Rashid has 3 small urban farms, making up a co-op called Truly Living Well. So, kudos to MoMA’s PS1 for exemplifying the best of high art with rural pragmatism. 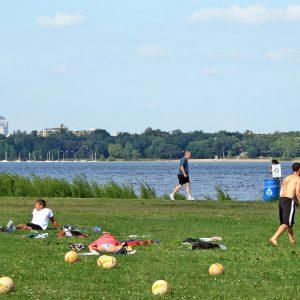 Like Frederick Law Olmsted, Alex Garvin has been working with parks his entire life. With dual degrees – one in architecture...