“I photographed the whole 47 acres – trying to come up with a new, standard, iconic photo of it,” he says. “I got up there and fell in love with the whole story of it.”

But it was a visit to Mies van der Rohe’s Farnsworth House that spurred Hill’s latest exhibition of photography.

“I realized that nobody had done a show with these buildings next to each other,” he says. “So I did, and presented it to show the relationship between Mies and Johnson.”

The exhibition will open on June 22 in the lobby of the Four Seasons restaurant in New York’s Seagram Building, a collaborative effort between the two architects.

It was probably a happier – and less competitive – relationship than the master’s and student’s work on their transparent modernist houses.

“Mies designed Farnsworth in 1946-47, but Johnson beat him to the punch by looking at the designs – and Farnsworth was not built ’til 1951,” he says. “It was a little testy as a result of the Glass House being built first.”

Not surprisingly, the two houses share a number of characteristics. They’re both glass and designed to be experienced inside and out at once. They share similar spatial flow and geometry. There are chairs by Mies in both. And each revels in its relationship with the natural environment,

“The Glass House is in the earth and Farnsworth is in a flood plain and floating five feet above the ground – it’s like an ethereal thing that might float away at any moment,” he says.

There are obvious differences, of course. The Glass House is black, and Farnsworth is white. Visitors step up to a plinth to enter Farnsworth, while the Glass House entry is two simple steps. And then there are the fireplaces:

“What Johnson did inside was a brick cylinder with a bath and shower on one side and on other is a fireplace – an ode to Frank Lloyd Wright,” he says. “The Farnsworth fireplace is more like a detail.”

Fifty percent of the proceeds from the sale of Hill’s photographs of will go to maintainence for these classic midcentury moderns. 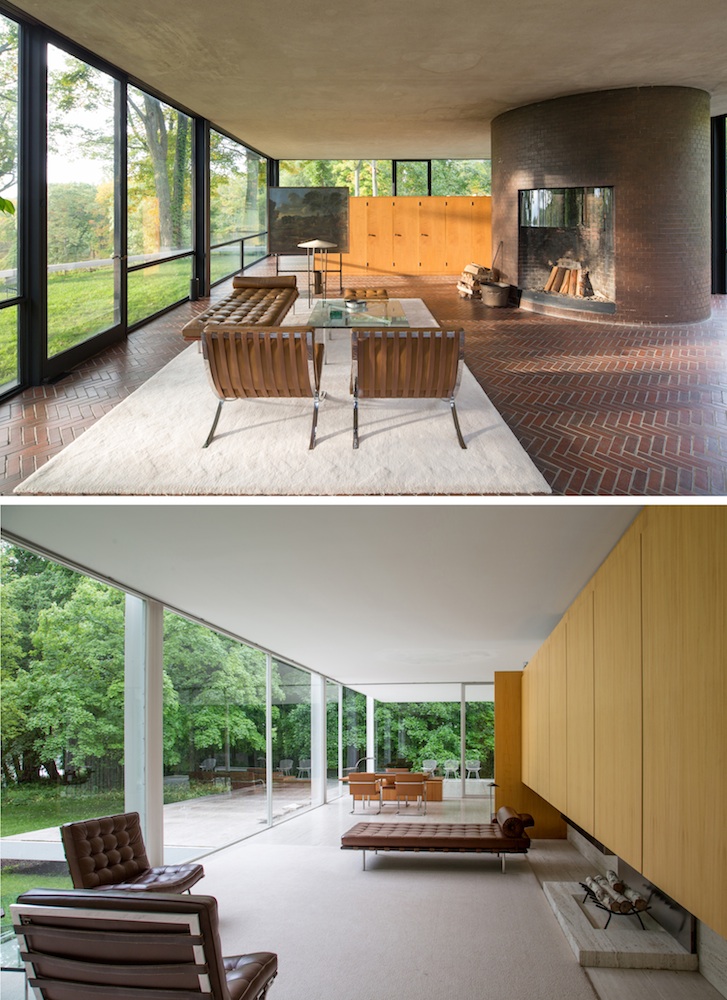 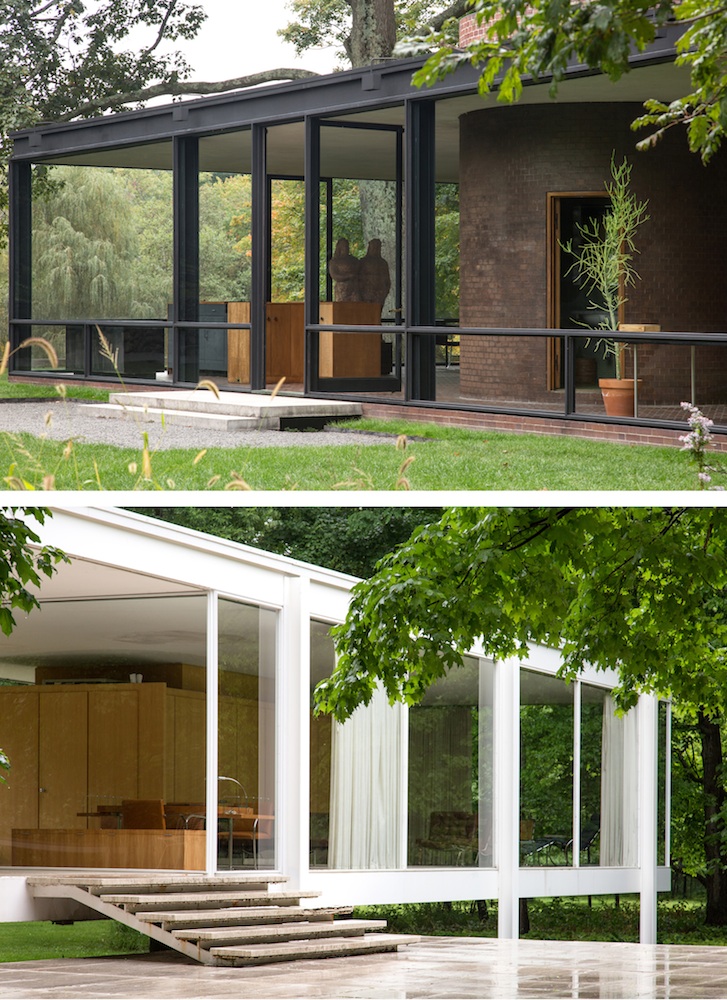 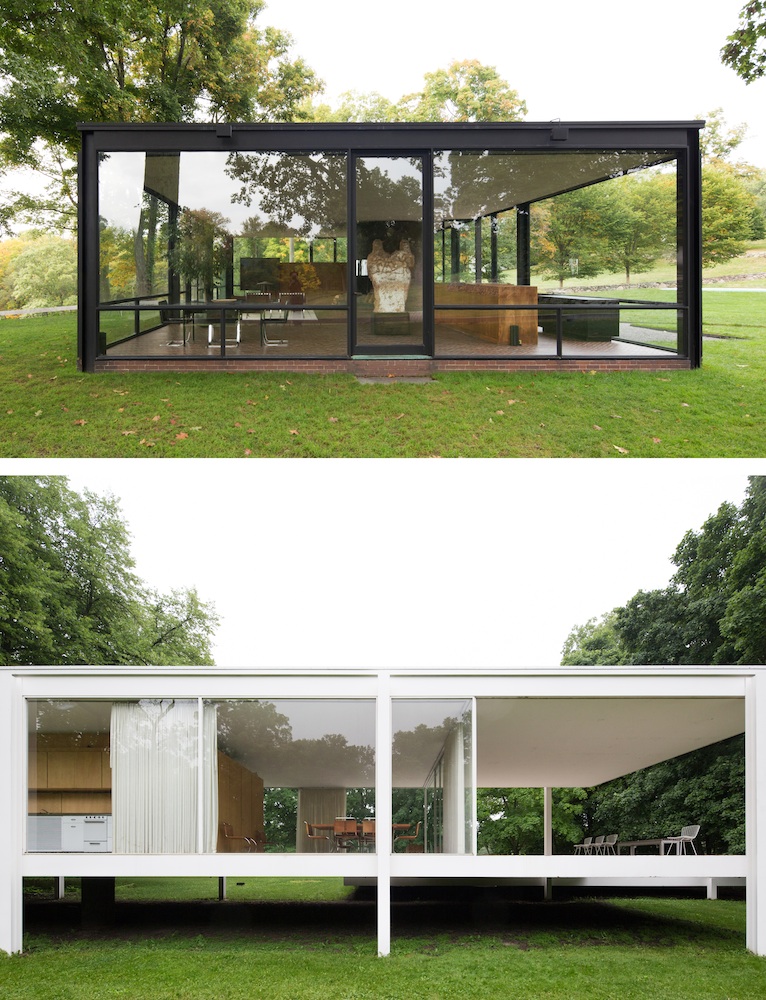 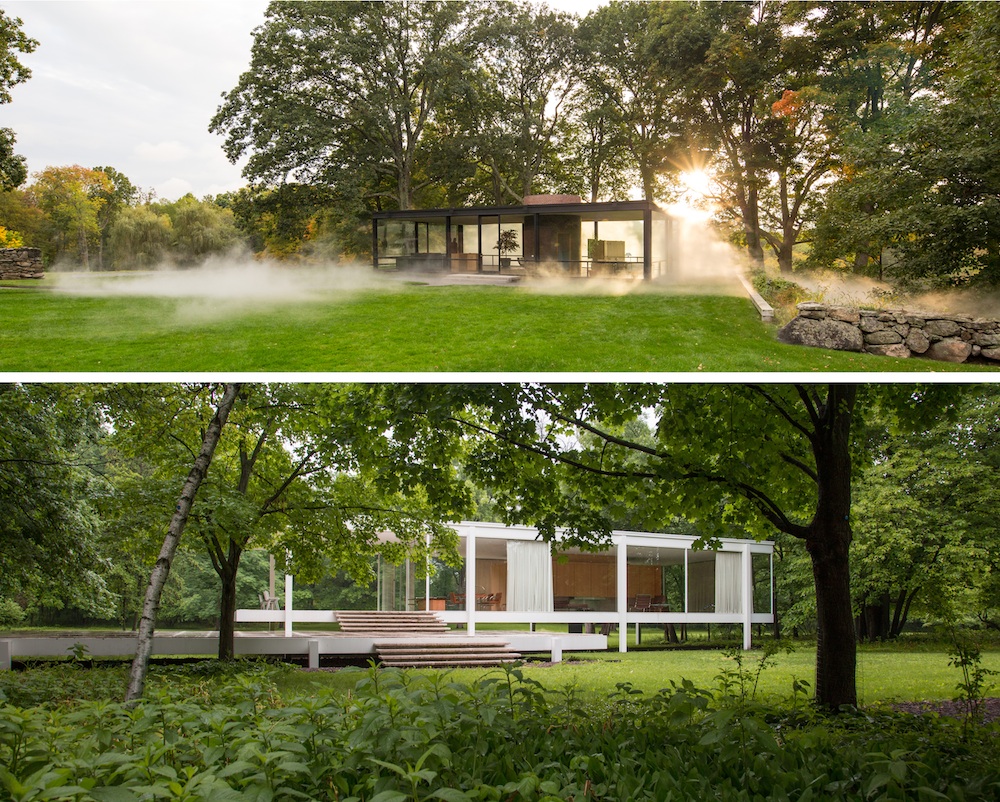 Dear Robin, we are among the lucky ones to have visited both of these gorgeous structures departing each site with the obvious comment as yours, re. a “side by side” exhibit.
And you have done it!

Currently we at our home in DC until October.

Any chance of a visit to DC this summer?