The opening line in a new film by Jason Cohn and Bill Jersey on Charles and Ray Eames pays the ultimate compliment to a designer.

“We weren’t sure what he was,” a contemporary solemnly intones about Charles Eames.  “Was he an architect? Was he a designer?  Was
he a filmmaker?  But what he was, obviously, was something we all wanted to be.”

Westinghouse, Boeing and Polaroid all sought out and trusted the couple with their product designs.  The coveted chairs and furniture they created are still being produced by Herman Miller today.

And “Eames: The Architect and the Painter” will take a bold look at their work on Monday, Dec. 19 on the PBS series “American Masters.”

“It’s a combination of footage they shot plus pieces from our archives and places like the Library of Congress,” says Mark Schurman, Herman Miller’s director of corporate communications.

Cohn and Jersey obviously hold the design team in great reverence, primarily because of the breadth of media in which the couple worked.  “It was incredibly varied,” says Schurman.  “They worked in film, photography, exhibitions and for the State Department.”

The common thread to all of their work, though, lay in communication.

“In some respects, even their furniture is about that,” he says.  “They emphasized the guest/host relationship of comfort, welcoming and shared time together, in the physical spaces they made.”

The filmmakers do not flinch when it comes to depicting the complex couple’s real and personal lives.  Toward the end of the film, Charles’ infidelities are addressed, to the point of interviewing one of his former love interests.

For more on “Eames: The Architect and the Painter,” go to http://firstrunfeatures.com/eames 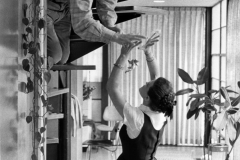 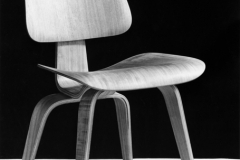 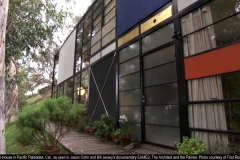 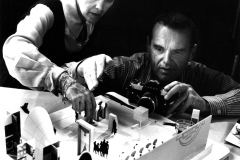 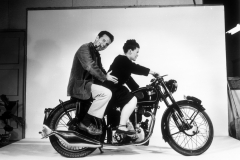 Charles and Ray Eames posing on a Velocette motorcycle,1948 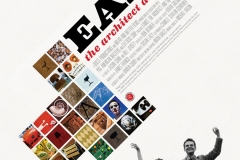 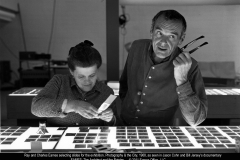 Ray and Charles Eames selecting slides for an exhibition 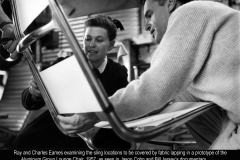 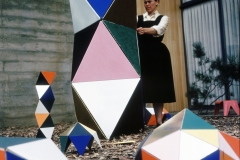 Ray Eames with an early prototype version of The Toy 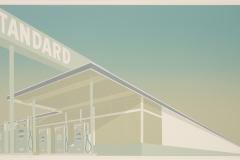 This creative couple at Eliel Saarinen’s Cranbrook outside Detroit actually did what the German Bauhaus merely promised to do. Oddly, two penniless German immigrants, neither of whom could afford to finish high school, never mind architecture school, Albert Kahn (Detroit) and Timothy Pflueger (San Francisco,became the architectural innovators parallel to the Eames pioneering in industrial design. That we mostly don’t know this can be blamed on Philip C. Johnson who spent too long a career corrupting American architectural discourse with his phoney branding of “the International Style” for New York’s MOMA. The Cleveland parvenu Johnson argued only Art mattered in architecture, ignoring the client’s needs. He mocked his Harvard teacher Walter Gropius in private letters for being obsessed with building for the “working classes.” Barry Bergdoll is discovering that PCJ’s error.

The Eames camp were the first to pioneer Design as a wholistic philosophy not limited to Architecture, but objects we encounter in our everyday life. American Designers should follow this European model again, and take Steve Jobs cues. Design matters!
Thanks A&A for another great post.