The family of the late Eduardo Catalano has created a $1 million scholarship fund for North Carolina State University’s College of Design.

Catalano, who taught at State in the early 1950s before leaving in 1956 for M.I.T. and a highly successful international career, died in late January 2010.

Up until his death, he and Marvin Malecha, dean of the college and professor of architecture, had been holding preliminary discussions on the possibility of rebuilding his iconic Catalano House on State’s Centennial Campus in Raleigh.

The 1954 residence featured a highly unusual hyperbolic parabaloid roof, with walls of glass.  Named “House of the Decade” by House and Home magazine in the 1950s, it was also one of the few houses to earn praise from Frank Lloyd Wright.

“It is refreshing to see that the shelter, which is the most important element in domestic architecture, has been so imaginatively and skillfully treated as in the house by Eduardo Catalano,” Wright said.

After the architect moved on to design projects like the Julliard School of Music at Lincoln Center and American embassies in Buenos Aires and Pretoria, the house he left behind eventually fell into disrepair.  It was demolished in March 2001.

Locals had held out hope that it might be rebuilt with modern materials.  But after a year of discussions, the Catalano family decided on a scholarship fund instead.

“The family believes that without Eduardo here, at best we’d end up with an interpretation of the house,” Malecha said.  “So instead, the school now has a scholarship fund in his name, based on need and talent.”

The fund will generate about $40,000 a year, with discretion of whether that amount goes to one or more students left up to the faculty committee and the dean.

That gives the college, of course, the opportunity to develop young minds that will be capable of thinking in terms as revolutionary as their benefactor’s, in perpetuity.

For more on Eduardo Catalano, go to http://web.mit.edu/newsoffice/2010/catalano-obit.html

For More on N.C. State’s College of Design, go to http://design.ncsu.edu/ 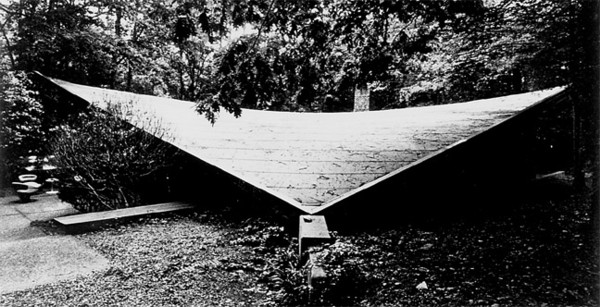 In Victoria, Balance at Dockside Green

A mid-century modern home designed by Pacific Northwest master Paul Kirk, converted to a visitors’ center for the Bellevue...