In the rapidly gentrifying neighborhood of Venice, Calif., Brooks + Scarpa has put the finishing touches on a 35-unit affordable housing apartment building.

“Historically it’s in a part of Venice where African Americans were forced to live during the war effort in the 1940s,” says Larry Scarpa, founder of the firm that bears his name. “It’s always been a bastion of minorities – mostly African Americans and Latinos.”

Today, though, they’re being pushed out, as the price of a square foot of land soars upward, to between $1,000 and $1,200. “The community is trying to drive everyone out,” he says. “It’s probably more Latino than African American now and progressively getting more white.”

So, placing an affordable housing complex on Rose Avenue, right across from Whole Foods, wasn’t exactly a walk in the park – even for Scarpa, who estimates his firm has done thousands of affordable units. “We went through a fair amount of opposition, but we prevailed,” he says.

His client is Venice Community Housing, a service provider in the neighborhood for the past 35 years – creating jobs and developing five affordable housing projects to date. “We’ve worked with them over the years,” he says. “They want to provide decent quality housing – to meet their unit count and get it approved by council and planning commission before it gets to the building department.”

The 150-by100-foot site for this project was actually occupied by Venice Community Housing for the past 20 years, which moved out to get the apartments underway. Once it’s complete, they’ll move back into new offices on the ground floor, where retail is also planned. The new building’s LEED Platinum, a rating that’s fairly common for Brooks + Scarpa these days.

“On Rose Avenue, which is emerging as a hot spot in Venice with some pretty tony shops and restaurants, we wanted this building to be just as tony as the rest of it,” he says. “The massing kind of cascades to the street, and there’s a fine-grain scale of buildings in Venice, so the stepping and articulation responds to conditions on Rose Avenue.”

It’s a busy street, with vibrant pedestrian and vehicle traffic. “So, we made the street facade welcoming but you don’t see a lot of windows,” he says. “That way, people are not looking into the residential units.”

The exterior cladding’s an inexpensive stucco, used with a couple of 21st-century twists. “Generally, on affordable housing we rarely get to use anything but the cheapest stuff – so, we scalloped the walls,” he says.

And then there’s the Sparkle Grain in the stucco. “When you drive by the scallops give the walls dimension, and the whole building kind of shimmers,” he says. “It makes stucco look like a rich material.” 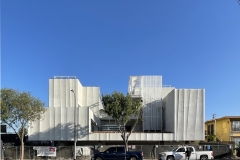 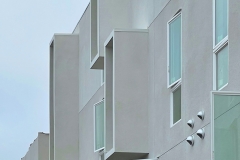 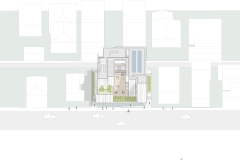 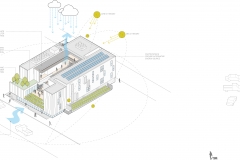 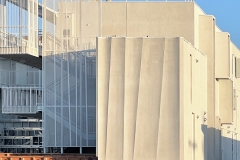 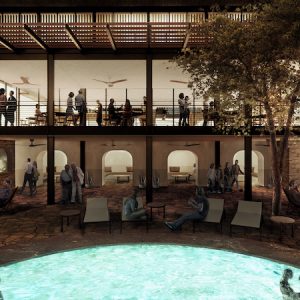