When Eric Gartner and Coty Sidnam, partners in the New York firm of SPG Architects, met their new client in Costa Rica back in 2005, he’d already started to put up a steel structure on his steeply sloped site at the tip of the Osa Peninsula, overlooking the Pacific and Panama in the distance.

“There was a platform there to see the view, and while it functioned well with the landscape, it completely contradicted his view,” Gartner says. “We re-oriented it to create a panoramic view along the diagonal of the house.”

From an inside corner to the outside double infinity pool, they formed a forty-five degree angle, opening up vistas from water’s edge. The angle inspired the residence’s moniker: Casa Torcida, or Twisted Home.

It’s snugged into a 100-acre tropical site at 200 feet above sea level, with living level at 218 feet, master bedroom suites at 230 feet, and rooftop hovering at 242 feet. “He wanted to live in the rainforest, but he wanted to be off the floor of it,” he says. “There are the snakes, the insects and the creepy-crawly things down there, so all of the house is lifted up off the ground.”

The home requires little air conditioning. Of its 18,000 square feet of occupied indoor and outdoor space, only 400 square feet inside needs it – and that’s for books and equipment in the library and music rooms. The rest is naturally ventilated for maximum indoor/outdoor living.

Better than a net-zero home, it actually creates more power than it uses. “But there’s no grid to feed it back to,” Sidnam says. “We could have bought power locally, but that just would have led to the suburbanization of the peninsula.”

So the architects sought input from Jason Borner of Poderco, S.A., a known solar systems expert in Costa Rica. They called for the largest array of rooftop solar panels in Costa Rica at the time, with 18.4 kW in PV capacity, coupled with 207 KW in battery storage at a lower level. Then they added a 75,000-gallon water collection tank.

External materials are designed to be sun reflective, including Brazilian quartzite for the terrace, and a roof of white ceramic epoxy that’s microbe-free for water collection.

Cabinetry inside was milled and planed from wood salvaged on site prior to construction, including a reddish Ronron, with Cristobal and Cenizaro.

But it’s the view from above that’s the real driver of this home. “He’s an avid surfer and he loves the rainforest,” Sidnam says of their client. “It provides him the opportunity to be up in the trees with the howler monkeys. He can see the shoreline and the beach – he’ll get up in the morning and if the surf’s up, he’s gone. If it’s not, he’ll go back to bed.”

That would be the best of all possible worlds. 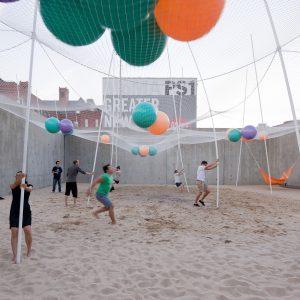