Courtenay S. Welton: ‘If He Be Truthful and an Artist!’

In April 1925, Courtenay S. Welton penned an article for The Southern Architect and Building News on “Houses of the Georgian Period.” Among the residences he surveyed was his own ancestral home, the Nelson House in Yorktown, Va.

“The bricks were brought from England and are laid in Flemish bond, the quoins and keystones being cut stone,” he wrote. “The interior is richly panelled, some running to the ceiling. A notable feature is the windows with eighteen square panes and arched top sash.”

A graduate of Hampden-Sydney College with a degree in architecture from Columbia, he was launching a career to focus on the Colonial and Tudor revival styles in Virginia and North Carolina.

In the mid-1920s, he bought a pair of lots in Westmoreland Place in Richmond’s West End, and built two homes there. He sold one and kept the other, at 4802 Charmian Rd., for himself, his family and the promotion of his practice.

He opened an office at 105 E. Cary St., sharing space with landscape architect Charles Gillette, with whom he would collaborate on a number of projects.

During the 1930s, he designed iconic structures for Hampden-Sydney, including the Watkins Bell Tower. There he gathered bricks from the homes of former presidents, as well as prominent alumni, faculty and trustees, for a geometrically pleasing gem at the center of campus. By 1937, he had designed and built Morton Hall, with a respectful nod to its most significant antecedent on campus, Cushing Hall.

When Ralph Adams Cram, designer of campuses at Princeton and the University of Richmond, learned of the architect for Morton Hall and its cost, The Hampden-Sydney Record recorded his response. The building was, he said “in perfect accord with the best you have here… I am amazed that you could get such a building as this for the sum you have named.”

Actually, it should have come as no surprise at all. In The American Home in March 1930, Mr. Welton had clearly laid out his philosophy on architecture, clients and costs:

“If an architect were to be asked to name the three conditions under which he could do his best work for his clients, I think he would name these: To have his clients possess the fundamentals of good taste and judgement; to be given a site blessed by nature with an inviting outlook; and to be backed by a generous bank account.

“If the architect were then to say which of these three conditions he considered the least important, he would unhesitatingly eliminate the last – that is if he be truthful and an artist!”

His final project before his death in 1951 was in suburban Raleigh, N.C.  There, on a narrow lot shaped like the sliver of a pie at 1704 Oberlin Road, he designed White Memorial Presbyterian Church, its slim, tall steeple a vertical mirror of a challenging site.

Today, the Georgian Revival sanctuary is crowded at each service, and to some degree by the buildings that surround it.  But its Flemish bond walls, cut stone keystones and windows with arched top sashes stand in mute tribute to a man who drew on his American roots to revive centuries-old styles and delight new generations every day.

(Parts of this post appeared originally in the August 2006 issue of The Hampden-Sydney Record.)

For more on Hampden-Sydney College, go to www.hsc.edu.

That would be him.

Mike, was this your grandfather? 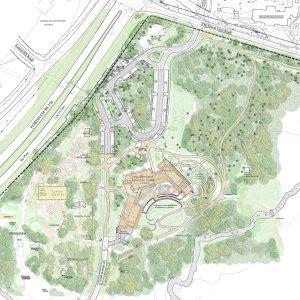 No one can say that the new North Carolina Botanical Garden in Chapel Hill hasn’t been carefully thought through and sensitively...