At museums and visitors centers, less interpretation is more.

One day in the 1970s, I wandered into the rare documents room at the British Museum, where cloth-shrouded glass cases held poems, speeches and letters written by famous people. You could pull back a cloth, read the document, and cover it up again. When I pulled back one of the cloths, I caught my breath: Before me was the Magna Carta. How amazing, I thought, to find the most important document in British history displayed so diffidently, in a glass case with a curtain over it. I was thrilled.

In America, we handle our history differently. The Declaration of Independence, for example, is encased in bulletproof glass in a gold-plated, titanium frame filled with argon gas. The case is lowered each night into a crypt beneath the National. Archive. The display is so overpowering that it is possible to feel that the container is more important than the founding document inside. It makes me feel as if I am being told of its importance rather than invited to discover it. Yet history is best discovered by each of us, just as democracy is best preserved as a personal responsibility.

I had another epiphany recently when I visited the North Bridge at Concord, Massachusetts, where the first battle of the American War of Independence took place. Now preserved as part of the Minute Man National Historical Park, the Bridge at Concord is a simple wooden structure spanning a stream about fifty feet wide. At each end of the bridge stand two stone monuments, one erected by the Americans, one by the British, many years after the battle. There is no visitors center nearby, no auditorium with a twenty-minute film, no interactive video recreating the battle, and certainly no titanium cases containing artifacts in argon. Instead, in a clearing next to the bridge, visitors sit in a small semicircle of wooden benches. A park ranger stands and tells how the British army, marching out from Boston to intimidate the colonists, approached the bridge and was met by a volunteer group of Minutemen.

The effect of his story is compelling. We can see the short distance between the two groups of men, who, muskets drawn, faced death that morning. We can imagine how the roar of guns silenced birds’ songs on that spring day. We can see the road where the American farmers approached the bridge, and we can see the road down which the British fled. The ranger quotes a poem written by Ralph Waldo Emerson for the dedication of the American monument on July 4,1837:

On the rude bridge that arched the flood,

Their flag to April’s breeze unfurled,

Here once the embattled farmers stood

And fired the shot heard round the world.

There at the North Bridge, nothing stands between our history and us except sunlight reflected in the dust. We are enlightened without being pushed, always a welcome experience.

Sometimes the best thing for a designer to do is to not get in the way. 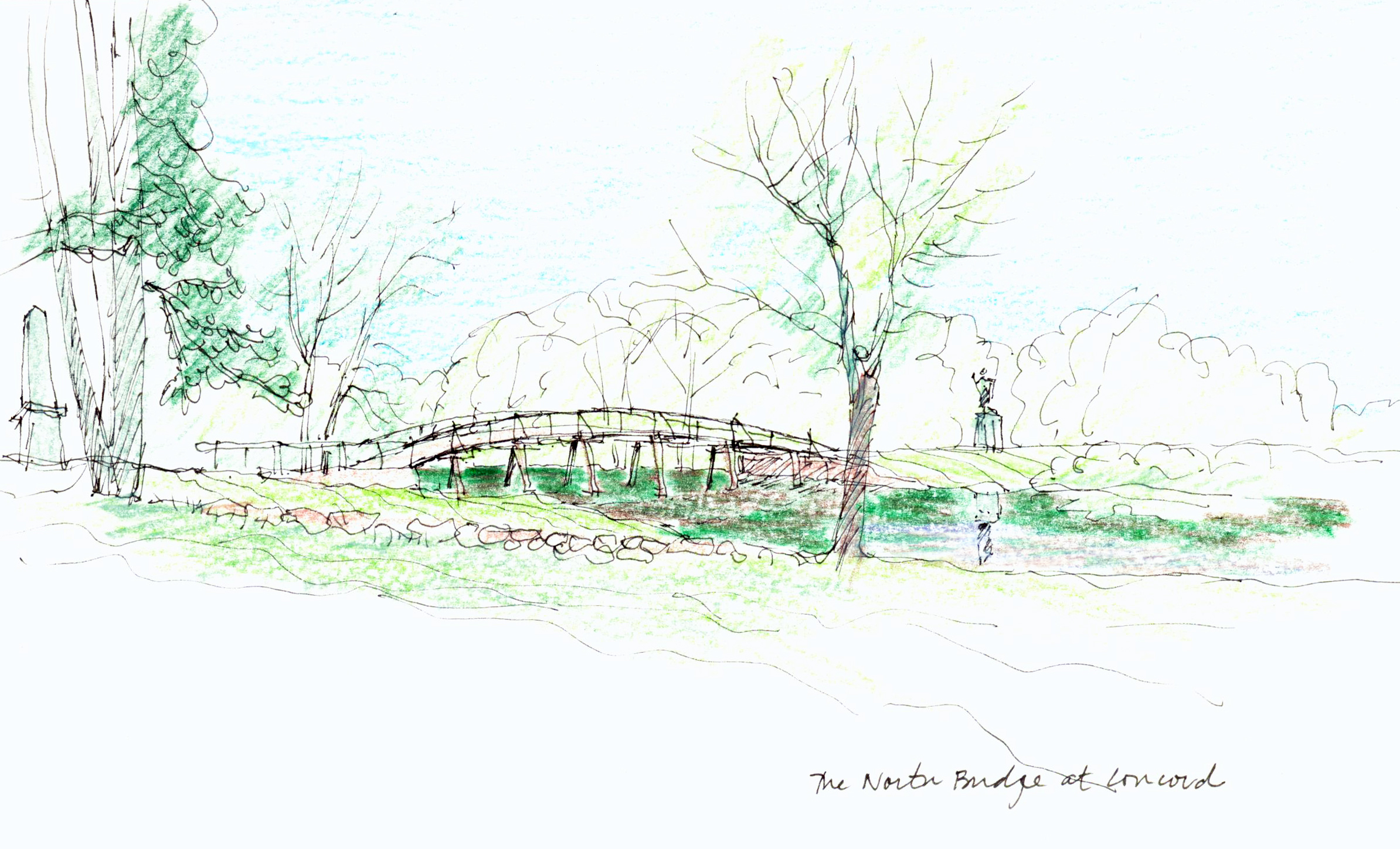 Designs in Tile that Choose Themselves

Sometimes a lot depends on what is not there. Harmon’s experiences with the magna carta and the North Brigde are perfect examples. Great reminders.

Superb recollection on historical places and artifacts! The North bridge story on the USPark Service ranger reminded me of my youth during the ’30s when I was one of the kids who told the story of the battle of Bunker Hill to tourists. Even after splitting our tips (anywhere from a few pennies to 25 cents or so) with our mentor “older kids” by the prescribed rules we were often able to bring home about a dollar a day which helped a great deal in those Depression racked days. Like Frank Harmon I susoect it gave me a liflong joyfull appreciation for our history and all those who have contributed to it.