What’s an architect to do with a 60-year-old copper roof, no longer in use?

If you’re Silvio Baldassarra of NORR Limited Architects, Engineers & Planners in Toronto, you look around for repurposing opportunities.

Like the walls of the Parliamentary Library, or Wellington Building, located on Canada’s equivalent of Capitol Hill. It’s a huge, double-height room, 150 feet by 80 feet, and naturally lit by skylights. Up until recently, it was also very noisy.

“The skylight is glass and there’s reverberation off of that,” he says.

The architects came up with the idea of recycling the copper sheets – as sound insulation on the library’s walls. “Our thought was that it was a good idea to re-use it with its green patina,” he says. “But the beauty wasn’t just the green – it has the stains and markings from weather and hail – and it changes from panel to panel.”

Alas, architects from the House of Commons would have none of it. “They looked at it, said that copper is not a noble material, and rejected us,” he says. “We came back to office pretty disappointed.”

Reluctant to to send it to a smelter and melt it down, he and his associates took the copper up as a challenge. “We wanted to reuse the material that would actually tell a history of being on this building,” he says. “If they would not accept it as a flat sheet, then we wanted to turn it into sculptural wall and do it in a way to show the beauty of the copper, but not get into the flatness.”

They went through four fabricators until they found one who could fold the sheets like oversized origami. “The back panel is perforated and behind it is acoustic insulation, with a shell in front for sculptural reasons,” he says.

They persuaded the client to use the copper to tell the history of the building, make it sculptural and absorb sound. “It completely works,” he says. “You could use it as a performance hall, but as a library it’s an exceptional room.”

Better yet, the 3,500 shells that now wrap the library came in at $800,000 – just a notch above the cost of wooden acoustic insulation.

And it not only looks a lot better – it’s a winner in the 2017 North American Copper in Architecture Awards program. 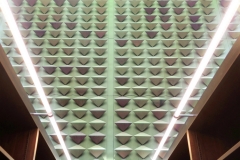 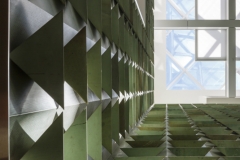 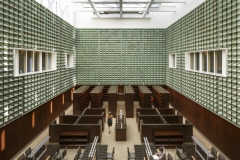 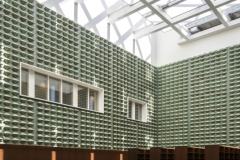 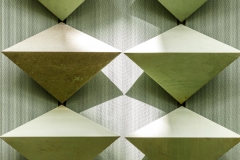 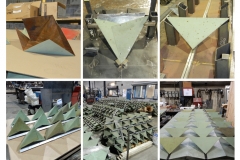 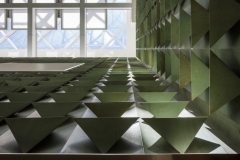 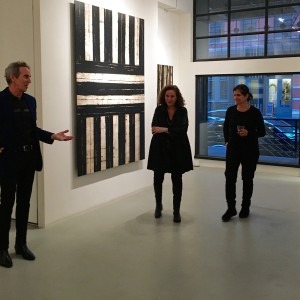 Known first for his revolutionary earthcasting sculptures and more recently for his immersive “White Gold” installation,...