John Boyer, CEO of the new Bechtler Museum of Modern Art in uptown Charlotte, N.C. is feeling pretty good about the city’s cultural prospects these days.

“We’re all lucky here in Charlotte,” he said about the recently-opened Bechtler, designed by Swiss architect Mario Botta, and four other uptown projects. Also open are the Harvey B. Gantt Center for African American Arts and Culture, designed by Phil Freelon of Durham, and the Knight Theater by Thompson, Ventulet, Stainback, and Associates of Atlanta. Soon to come are the new Mint Museum by Machado and Silvetti of Boston, and the NASCAR Hall of Fame by Pei Cobb Freed and Partners of New York.

All save the NASCAR project are interconnected in an uptown complex funded by a consortium of government, private and arts interests. But even the Hall of Fame is within easy view of the others. Together, they represent a billion dollar investment by city leaders. Moreover, the center is debt-free today, with fundraising for a $100 million, endowed maintenance fund almost complete.

“It’s a very enlightened deal,” he said. “The city owns the Knight, the Bechtler, the Mint and the Gantt, and they’re leased back for 38 years. It’s an excellent example of city patronage and foresight.” Wachovia Bank, serving as developer, insisted on making the project as green as possible, he added.

If the city were enlightened, the Bechtler is its symbol. Boyer likens Botta’s design to a great tube of clay, hollowed out and filled with light. Clad inside and out in terra cotta, its interior spaces are flooded with natural light from four floors of glass. “The inside is not what you’d expect from the outside,” he said. “There’s this series of beautiful vistas of the city — it’s just not the norm in museum design to have those wonderful visuals penetrating the interior.”

The broad vistas live alongside a collection of 1,400 works of art, the breadth of which was driven by friendships between the artists and the Bechtler family. For 70 years, they collected works by Picasso, Giacometti, Miro, Calder, Warhol and others from the School of Paris during and after World War II. Their sampling of work by Corbusier alone is stunning: there are prints, a painting, a tapestry and a pair of 1929 chairs of chromed tubular steel with leather straps and animal skin backs.

A fourth floor gallery, cantilevered over South Tryon Street, displays only a tenth of the collection’s holdings at once. But, Boyer said: “It’s breath-taking. It’s a most powerful union between the collection and the delights of the building.” 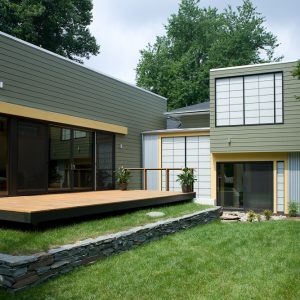 Architect Amy Gardner believes that tear-downs are not the only solution to our slowly deteriorating inventory of mid-century...