Michael Connors is an author who’s transformed his favorite topic into three dimensions.

He’s written three books on Caribbean decorative arts during the past decade. Along the way, he began collecting the post-World War I Art Moderne furniture that permeates the islands.  Now he’s partnered with Ohio-based manufacturer Scott Thomas to launch a line of furniture and upholstered seating inspired by the Caribbean lifestyle.

“It’s all about comfort,” Connors says about the line he introduced over the weekend at the October’s High Point Market in North Carolina.  “It’s about telling your friends to chill, to take a breather.”  Among the pieces is a dining table that’s a low, 26 inches tall, rather than the traditional 30 inches.

The designs are influenced by furniture from different islands.  “They all wanted the latest design fashions from Paris, London and New York in the 1930s,” he said.  “The problem was that the wood disintegrated because of tropical woodworms, so they started copying it and making it out of local mahogany, satinwood, yew and ebony.”

Up until the 1950s, artisans in the Caribbean were turning out their own versions of the low and slow Moderne furniture, until it fell out of fashion.  Now that a lot of the Caribbean Colonial pieces are out of most collectors’ reaches, the 20th century work has become popular.  Connors is the first to bring it out in a reproduction line.

“I’m trying to create a new fashion and a new trend, with a price point that’s low so young people can afford it,” he says.  “It’s mid-sized, not oversized, and as soon as you sit down in these chairs, you don’t want to get up.”

He’s using birdseye maple, macassa ebony and rosewood for the line, all of it plantation-grown to be used in veneer work.  None of the woods he’s using come from endangered species of rain forests.  Scott Thomas manufactures case goods in a factory in Alexandria, Egypt, that employs about 150 workers who build furniture one piece at a time.

For more on the collection, go to http://www.hfnmag.com/furniture/scott-thomas-partners-michael-connors-caribbeancuban-modern-line 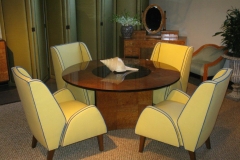 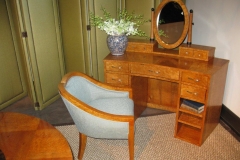 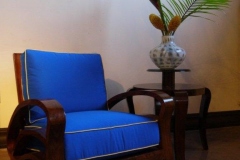 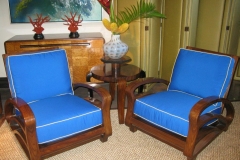 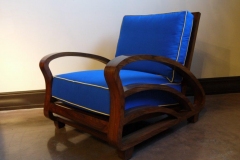 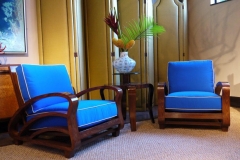 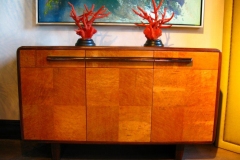 What’s an architect to do when asked to make a headquarters building out of a mass of metal scraps scattered out over a ten-acre...