Hamilton, Ontario may be a blue-collar steel town – but like Toronto, its neighbor 60 miles north – it’s a music town too.

That’s according to Bill Curran, principal in Thier + Curran Architects in Hamilton. And he should know. His firm recently completed the design and renovation of a music hall there, dedicated to the concept of introducing children to classical, jazz, and rock music.

The client was The John and Ellie Voortman Charitable Foundation, a group strongly committed to the arts. They bought the town’s old Gasworks building, one that dated back to 1850. It had served first as a large urban home, and later, as an office for a gas plant. “More recently it had been taken over as a church, and poorly renovated,” he says. “The foundation took it over and brought us in.”

The foundation’s deeply involved with a non-profit organization called the Hamilton Music Collective. Its AIFEC (An Instrument for Every Child) program loans instruments and provides free music lessons to elementary school students who can’t afford the cost. Since its launch, it has involved some 5,000 students across 14 Hamilton schools – and continues to expand.

Outside the Gasworks building where the structure snugs up to the sidewalk, the architects moved the front door to the rear of the building via a wraparound porch. That porch widens to a performance space out back, where chairs can be set up in a parking lot on warm summer evenings.

Its external material palette is fairly simple: Doug fir, brick, stucco, and large, four-by-eight cement panels. “And there’s a diverse array of windows because we like to vary patterns quite a bit,” he says. “These kinds of buildings don’t demand symmetry or rigidity.”

Inside it was a total gut renovation. The architects added a ground-floor lobby, a washroom, a coatroom and a green room offstage, plus a large addition on the rear for multipurpose uses. Upstairs are large classrooms, offices and practice rooms. “We turned a stairwell into a classroom, with a U-shaped bench for teaching,” he says.

Formal but accessible, the interior’s meant to be inspirational for students. “We wanted it to be welcoming and comforting, and not intimidating when they cross that threshold – into a great, safe space that’s inspiring and bright,” he says. “The colors are deliberately bright as a design tool – so it’s not like the clinical, bland classrooms they’re used to.”

An aficionado for all things Venetian, Curran used Murano tile inside, contrasting it with cold-formed, raw steel. There are machine-cut, pop-up, acrylic light fixtures from Copenhagen, glowing Spanish bentwood fixtures in cherry and birch, used as pendants and wall sconces, plus the Italian lights that Renzo Piano is known to favor. “I use them because I like the light,” Curran says.

But this design’s real focus is to serve the music and the students. The Hamilton Music Collective was founded in 2008 by German-born saxophonist and former New York City Blue Note Records executive Astrid Hepner. She’s joined by her husband, Darcy Hepner, a former Berklee College of Music professor – and saxophonist in the legendary band of Blood Sweat & Tears. The two are well connected in the world of music, and bring in guest performers from Los Angeles, New York, and Europe to teach the students – and play with them too.

“They’re performing on stage with the kids – it opens them up,” he says. “They’re inner-city or poor kids who now can get an eye into this world of music.”

For them, Thier + Curran designed a building that enhances their musical experience, while exposing them to something beyond that – thoughtful architecture to enrich their lives even further.

Every city on the planet would do well to embrace that kind of concept. 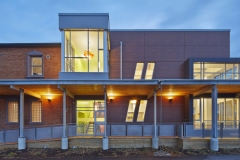 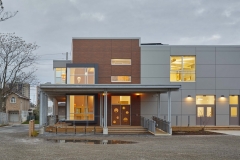 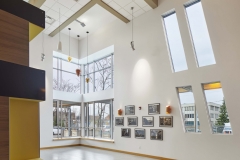 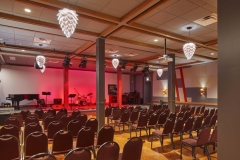 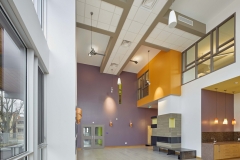 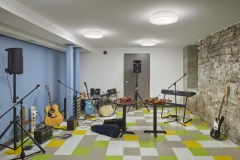 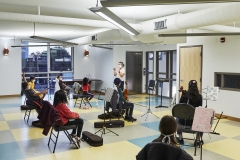 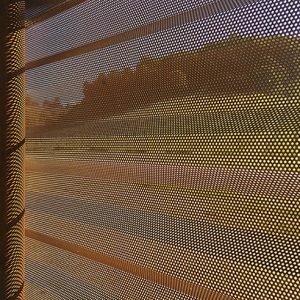