San Diego architect Heather Johnston believes in the transformative, the evolving solution and the revelation that defies pre-ordination.

“The best results always exhibit something that reveals itself, that hasn’t been named until that moment,” she said.  “You have to leave things open for answers to arise where they wouldn’t have if you’d made your decisions too early.”

It might be called a matter of watching and waiting – and a process counterintuitive, perhaps, to the science of building.

“It’s hard to get clients to understand,” she said.  “Suddenly, things will click, and you have to be paying attention, to be waiting for it so that when it shows up, you can say ‘Ah – There it is!’”

All of that plays out in an addition on Poole Street on a bluff in La Jolla, in her own residence which, as it turns out, is a home with a history.

Her renovation to the 1950s beach cottage, which earned a 2010“Home of the Year” award by San Diego Home/Gardens Lifestyle magazine, had once been bought and renovated in the 1970s by a world-renowned chef and her artist husband.  Their 2,100 square-foot home was featured a decade ago in the inaugural issue of Dwell magazine on its back page, with a title of “Historic Cottage Preserved – Romance Saved.”

Johnston bought the home, which had retained its bright-green1950s kitchen, in 2000, then expanded it to 2,700 square feet.   “We wanted to give a very sleek, clean and fabulous look to this corner of the house, which was kind of dark,” she said.

A clever use of new materials helped.  Johnston used wood blocks salvaged from an Oregon window factory – three-inch by three-inch strips, tied together – as flooring.  “It’s usually used for machine rooms,” she said.  “So it’s good for wear.”  She employed blackboard-like Vermont slate for three-quarter-inch countertops.  “There are very fine white veins in it, it’s heat-resistant and doesn’t need sealants,” she said.

In the bath, she used green structural Panelite – two layers of resin over aluminum webbing – as a translucent device to divide space, hold towels and provide privacy.  “It’s thin but it’s strong,” she said.  “I wanted transparency and privacy and magic – there are shadows, but you can’t see the details.”

That’s a little like the process she used for the project’s design.  Eschewing the concept of having all the answers at the outset, Johnston kept things as translucent and open as she could, as long as possible.

“I don’t mind living in an area of uncertainty in the process,” she said.  “I like to have things working out into something that evolves.”

For more on Heather Johnston, go to http://www.hjarchitect.com/LaJollaArchitectPrincipal.html 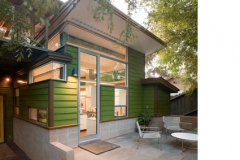 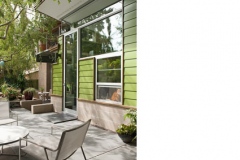 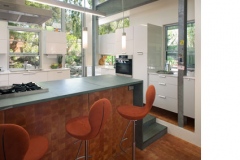 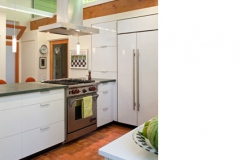 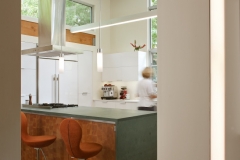 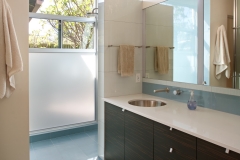 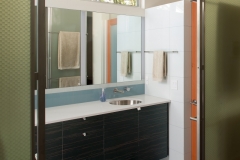 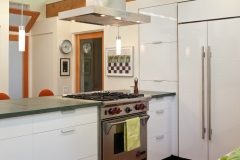 Absolutely love the comment about leaving things open. I’m a big believe that this approach also it yields the best results in architectural art. I am also in love with the Vermont black slate – watching an waiting for the right opportunity to use it, be it in my art or for personal use!

Sleek, sustainable and inviting all in one project – we all have a lot to learn here. Particularly like the mix of materials from the high tech panels to old tech floor that offsets the starkness of the cabinets. This is a super example of how modern design is truly livable.

The path to designs in ceramics has been a circuitous one for painter and printmaker Justyn Livingston.  She started...