For the past six decades, 85-year-old Alex Katz has documented – in a style that sometimes seems influenced by billboards or CinemaScope – a changing world of American art, literature and dance.

He’s not a pop artist or a photo realist or an abstract expressionist.  But while all those movements flourished, he was consistently producing one of the most sustained bodies of observation-based figure painting in the history of American modern art.

His work is significant because it records his connections to poets Allen Ginsburg, Kenneth Koch and Frank O’Hara, as well as to choreographer Paul Taylor and to artists like Red Grooms and Al Held.

Now an retrospective exhibition – 70 works in all media, each selected from his own collection – is on display at the Yale School of Art’s 32 Edgewood Gallery.  It’s been curated by the school’s dean Robert Storr, and it’s called KATZ X KATZ.

“Everything he paints is from experience, rather from predigested commercial images like Warhol,” Storr says of Katz’s work.  “He was doing oversized flat portraits 10 years before Warhol.”

A 1949 graduate of the Cooper Union Art School, he also studied at the Skowhegan School of Painting and Sculpture in Maine, where he learned both plein air painting and working from life.

“His work doesn’t look like anything else – it has a feel of direct experience,” Storr says.  “He has a way of reducing things to a very simple look – he’s learned from the work of Matisse and Franz Kline.”

The works depicted here include a number of portraits from a prodigious and wide-ranging artistic salon that’s not a leisure class, but that’s working hard to create the cultural climate in which they want to live.  “It’s a portrait of a creative community over a span of 50 years,” he says.  “It’s the way they really are, rather than the mythic bohemian culture – they’re urbane, sophisticated people who do extraordinary things.”

Katz captures their eccentricities – their posture, clothing and facial expressions – in a cool, even flat way.  “He thinks surfaces tell a lot, rather than that the truth is behind the surface,” he says.  “What we truly are is how we comport ourselves and how we present ourselves to the world.”

Now Katz is presenting a sweeping view of his world – as seen through the eyes of  a sharp-eyed realist – for the rest of us to consider.

“It’s fresh as a daisy,” Storr says.  “He makes the world more interesting, rather than less.”

For more on KATZ X KATZ, go to http://yale.edu/Gallery

For more on Alex Katz, go to http://www.alexkatz.com/ 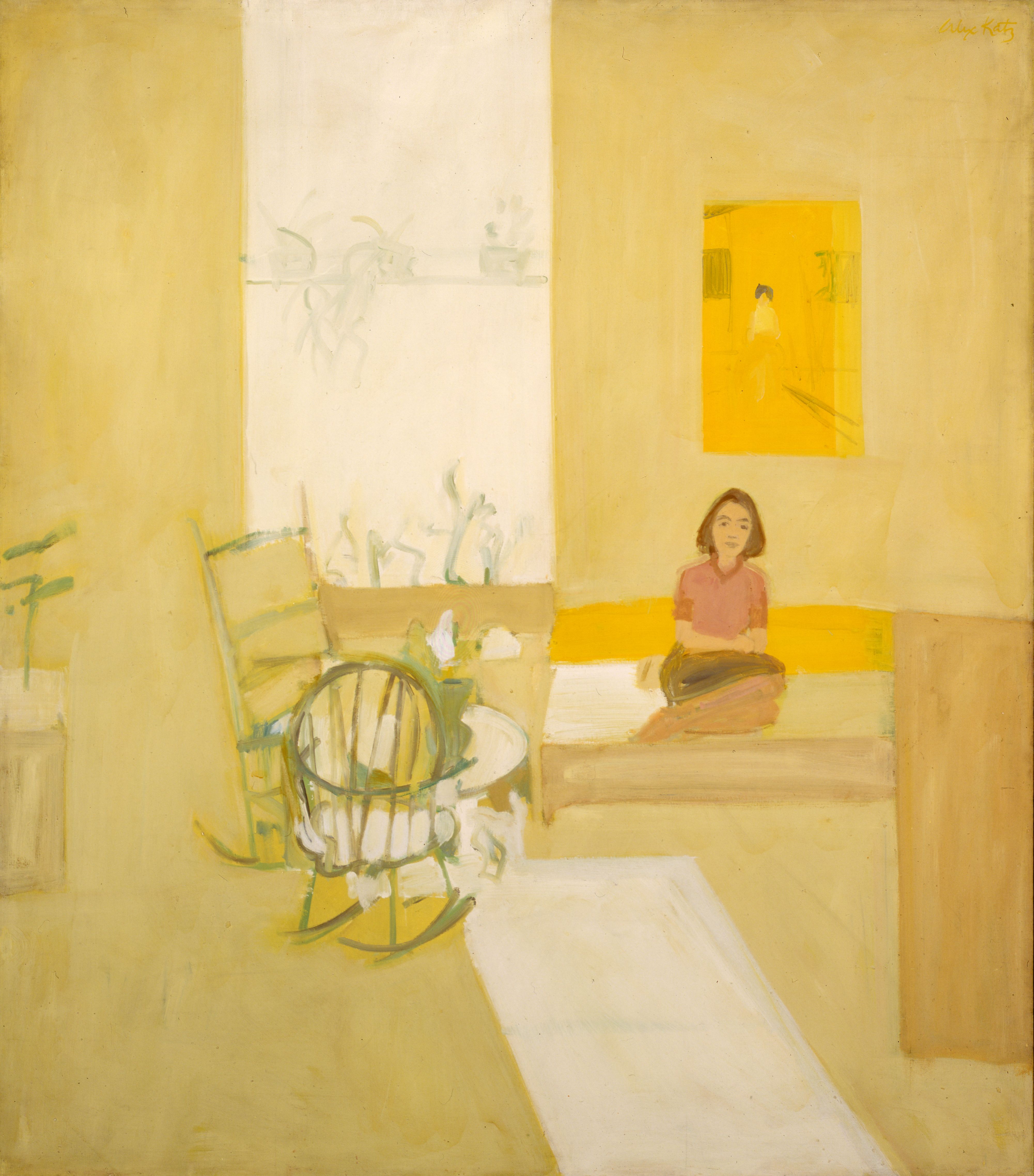 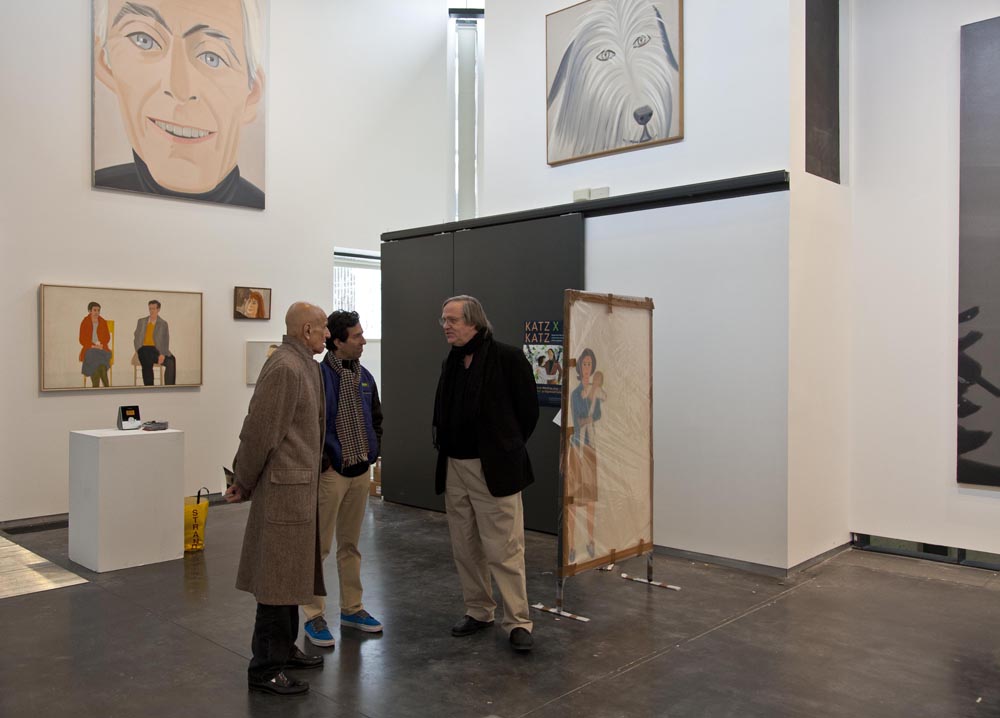 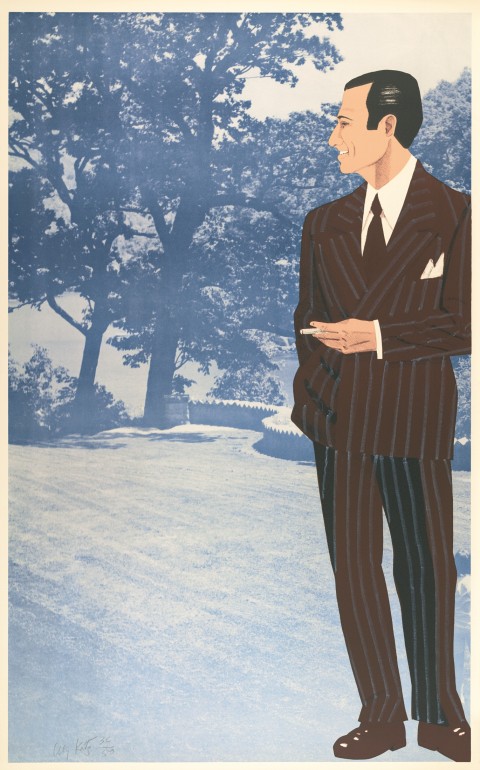 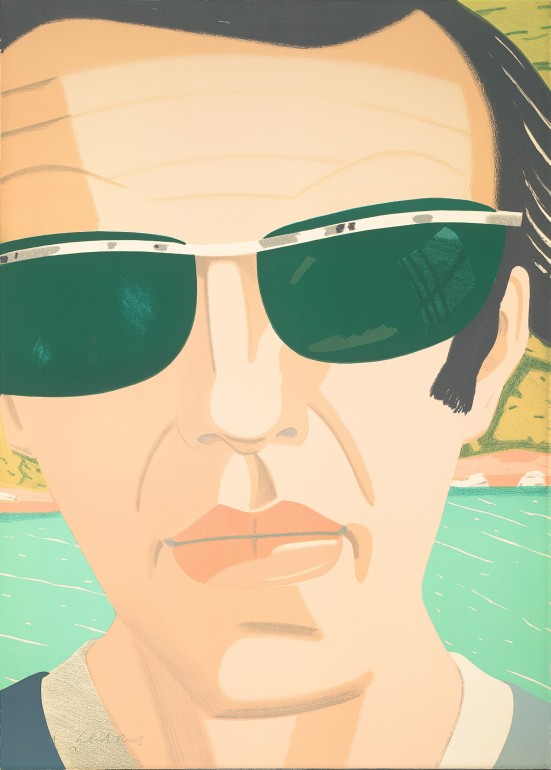 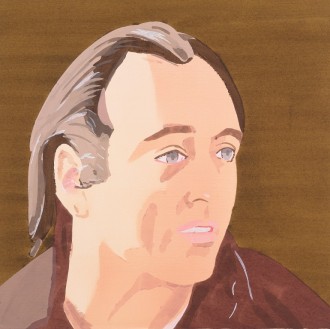 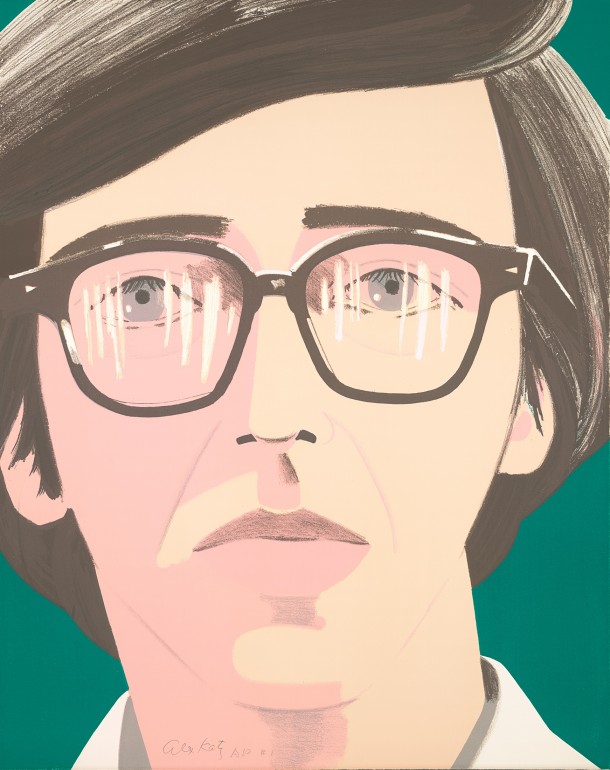 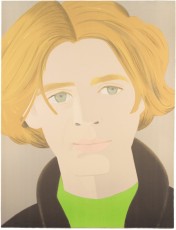 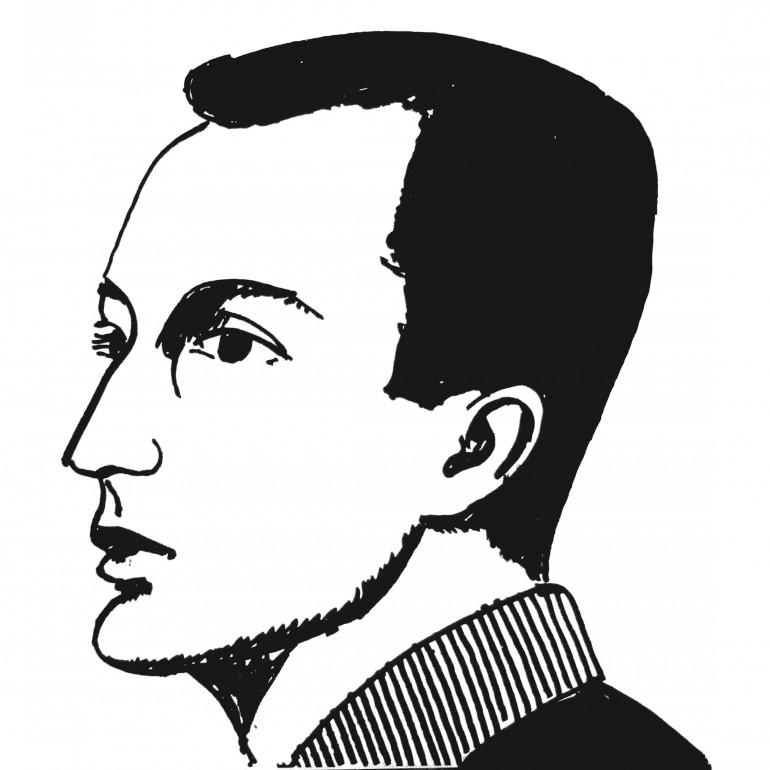 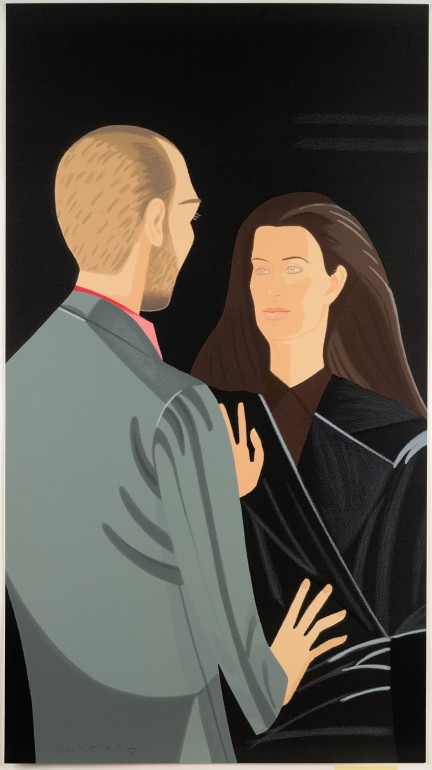 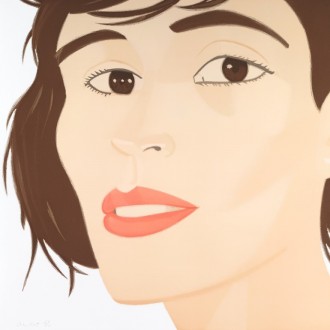 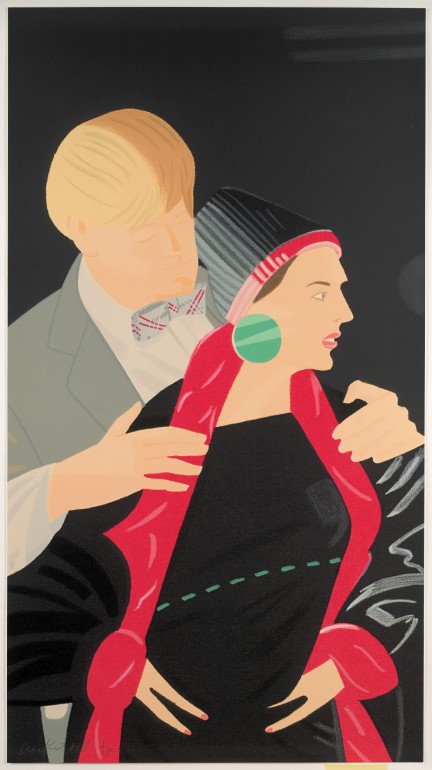 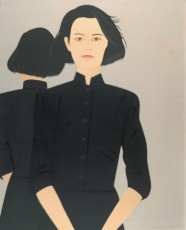 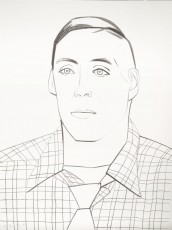 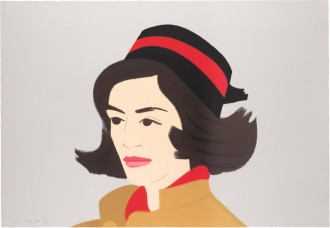 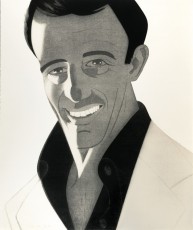 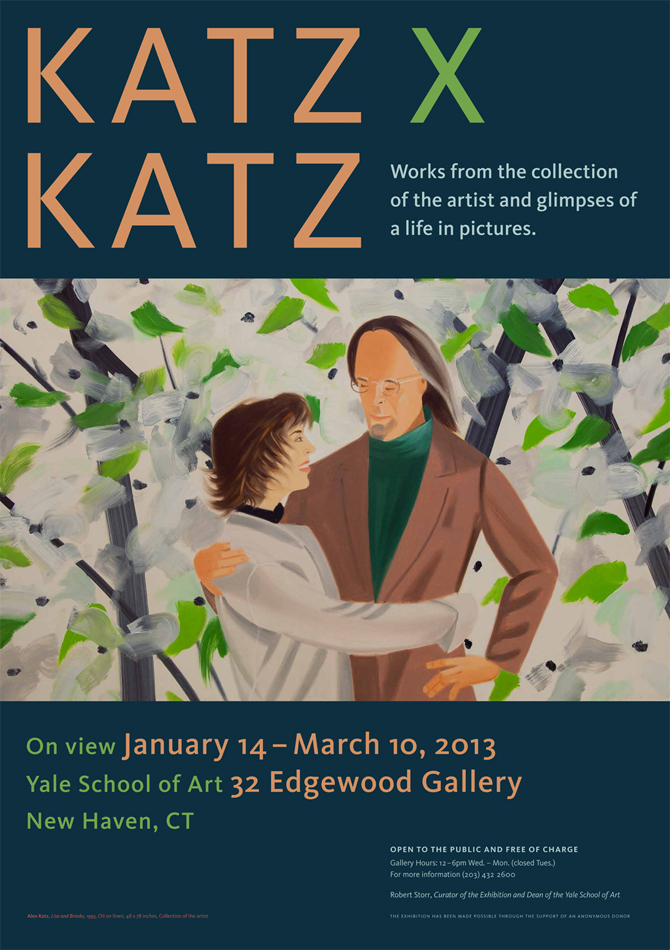