For the past six years, Judith Shatin, professor of music at The University of Virginia, has enjoyed an office in the Stanford White-designed Old Cabell Hall on the Lawn.

She has an inspiring view of Jefferson’s Rotunda.

“I happened to be sitting in Old Cabell, looking at that beautiful scene, when it suddenly occurred to me that what I was experiencing – an incredible play of life going on – was similar to watching a film,” she said. “A subconscious accretion led me to an ‘‘Aha!’ moment – and the idea came to me.”

She called filmmaker Robert Arnold at Boston University. They’d met when both were fellows at Rockefeller Foundation Center in Bellagio, Italy, and she knew his films dealt with time in very interesting ways. They decided to mount a still camera atop Cabell Hall, and from February of 2006 to February of 2007, took more than 300,000 photos.

“It was rather complicated,” she said. “There was quite a protracted process of getting permission from the architectural review board, and procuring funding. Then we had to find the equipment to take the pictures at a set time, and to upload them to my office and to Boston University.”

Arnold fashioned the stills into moving images as though a day were unfolding into a year. Lawnmowers race up and down the Lawn. Preparation for graduation takes place in seconds, and the ceremony is over in the blink of an eye. “You get a real sense of the context of things happening,” Shatin said. “It’s everything from the sublime to the humorous.”

While the film was being made, Shatin collected sounds, both in and around the Rotunda, recording interviews about its meaning with students, historians, Jefferson experts and U.Va. alumni. The sound of the piece is based on her recordings.

The resulting fifteen-minute video – a three-minute version is posted below – moves from sunrise to sunset while four seasons zip past.

Jefferson said that the Rotunda represents the “authority of nature and the power of reason.” This is a film that punctuates his thoughts vividly.

Beautiful Film. It reveals the Rotunda and Lawn in a way that displays their power and multifaceted life framing them a new way even for those of us that know them so well and have lived and worked among them.

I love that Shatin refers to her view as watching an incredible play of life…What a beautiful and true thought for those of us who have stood before the Rotunda in our lives.
I also am fond of the included quote of the Rotunda representing the “authority of nature and the power of reason.”
The both of these ideas surrounding the Rotunda are lovely and inspiring on this rainy evening. Thanks so much for the opportunity to experience such well written pieces on design, which, I believe, is a ministry to the soul unto itself! 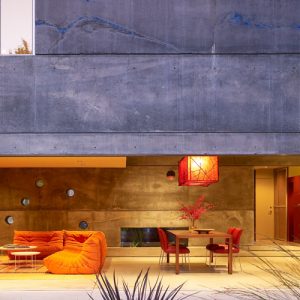 House 6 in Menlo Park is a tactile excursion into the sensuous appeal of concrete. At the heart of the 4,000 square foot...